The last day at Sasquatch is a bittersweet one. Although a shower and some real food is beginning to sound appealing, the idea of the musical festivities coming to an end is, at times, too much to handle. Luckily, Monday at Sasquatch was very possibly the most solid day of the festival, allowing listeners to get a taste of pure joy before trudging back to reality. The day began with new Sub Pop band Poor Moon, which includes Christian Wargo and Christian Wescott from Fleet Foxes. They offered a solid set, with listeners lounging in the grass. 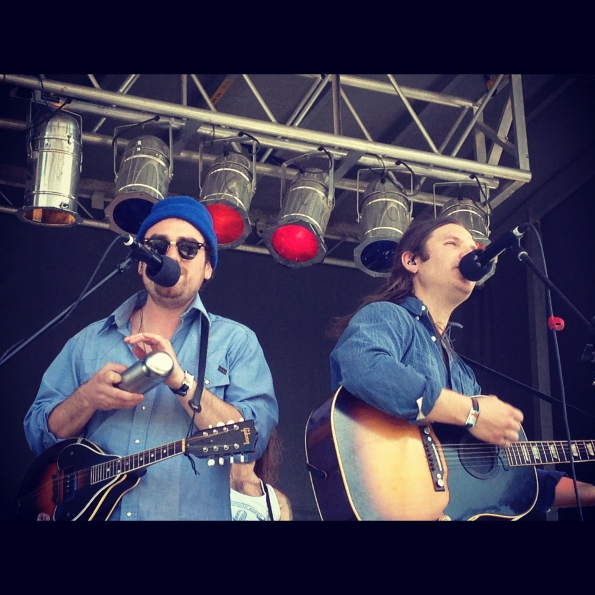 Poor Moon
Sallie Ford and the Sound Outside made some waves on the same stage with an energetic performance that included retro songs reminiscent of the ’50s and lead singer Sallie Ford in a dinosaur-printed romper. 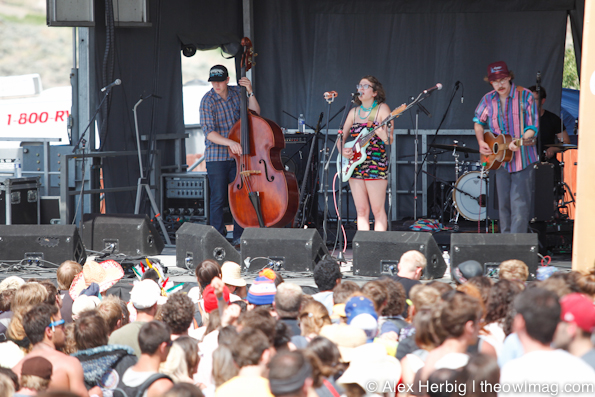 Sallie Ford and the Sound Outside
Light-hearted rock band Clap Your Hands Say Yeah got everyone moving at the mainstage with their strong stage presence. Despite a slightly annoying name, the band was anything but, delivering tunes that went down great with the crowd. 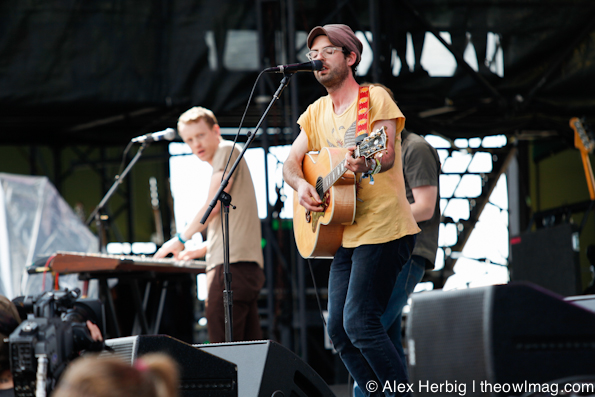 Clap Your Hands Say Yeah
Even though the previous band was great, British rockers The Joy Formidable took the prize for most exciting performance of the afternoon. Lead singer Ritzy Bryan jumped up and down while slamming on her guitar and sticking her fist in the air. At one point, she fell down, only to jump back up. This was the first “mosh pit” (albeit, a tame one) that this Owl had experienced at Sasquatch, and luckily, crowds at Sasquatch are much kinder than at Bumbershoot. Their high energy performance, which included crowd favorite “Whirring” did not feel nearly long enough. If they would have played for a few hours, that would have been quite alright with everyone in the pit. 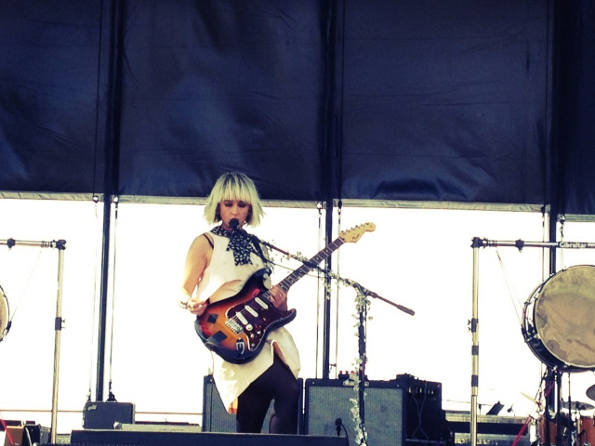 The Joy Formidable
Another perk of dancing in the front during The Joy Formidable was being a mere three rows away from Feist, whom we suggest that everyone see live. Listening to her album Metals may make you believe that this Canadian singer creates “chill” music; but live, her songs are anything but. The performance included a slew of guitars and a trio of ethereal backup singers. At one point, she asked everyone in the audience to yell their name all at once, replying with, “nice to meet you.” 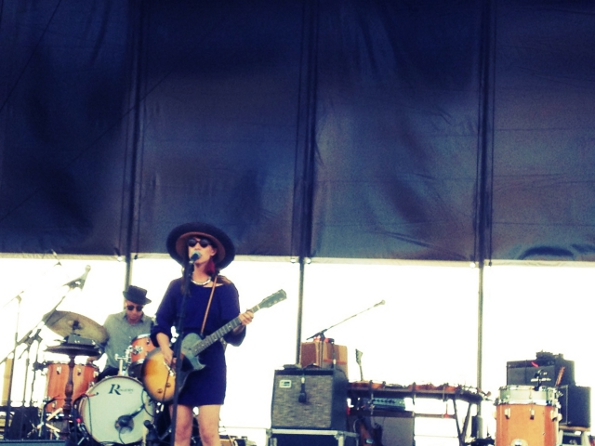 Feist
Rugged rock band The Cave Singers took the Yeti Stage with lead singer Pete Quirk wearing a neon green trucker hat. Much like this attire, the group delivered tunes that are slightly classic, really catchy, and extremely fun. The crowd bobbed and danced along to their bouncy melodies. 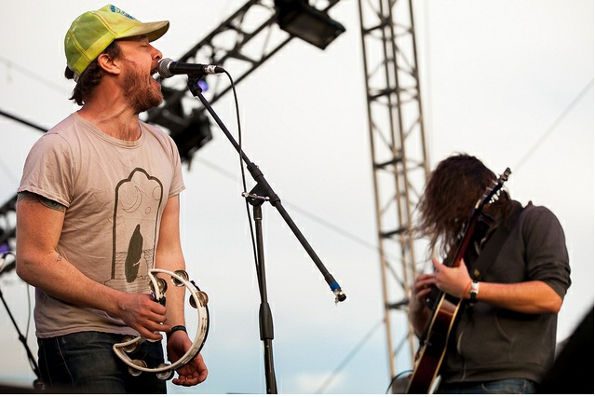 The Cave Singers, courtesy of Christopher Nelson
As a result of visa problems at the border (thanks a lot, Canada) post-rock band Mogwai had to cancel their late night performance at the last minute. But much to the surprise of everyone, and the joy of this Owl, Deer Tick stepped in to fill in the empty time slot. Instead of a repeat of their show on the previous day, they played an entire series of covers, renaming themselves throughout the set; such as Deervana and The Deer Replacements. At one point during the show an underage kid yelled, “Give me a beer!” to which lead singer John McCauley obliged, and after tossing one to him said, “Enjoy that you little fucker. That could get me arrested.” 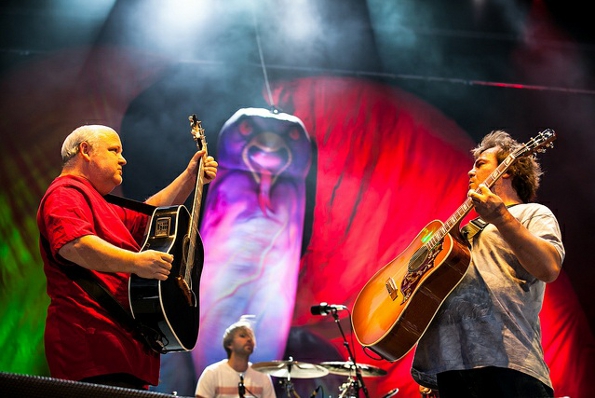 Tenacious D, courtesy of Christopher Nelson
As inappropriately hilarious as ever, Tenacious D took the mainstage, complete with a giant bird figure on stage that was very obviously a part from the male anatomy. Their entertaining performance also included the appearance of a “real life” Sasquatch on stage. 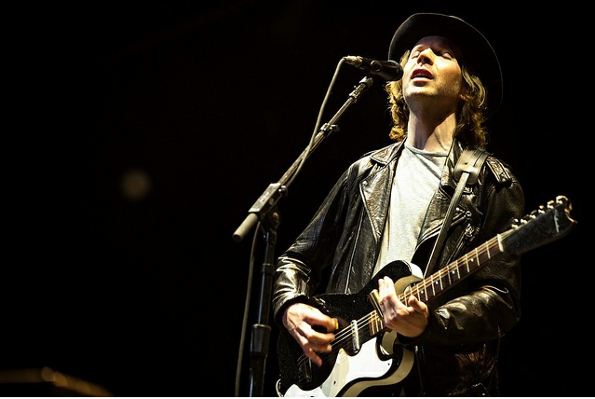 Beck, courtesy of Christopher Nelson
Rounding out the weekend was the legendary Beck who put on a show that no Sasquatcher will be forgetting anytime soon. Beck kicked things off right with “Black Tambourine” and played a set with a perfect mixture of his very large discography. The crowd sang along to hits such as “Loser,” “Think I’m in Love,” and “Girl.” The encore included help from Tenacious D, Sasquatch, and Beck’s son.

Overall, this Sasquatch weekend was a time of musical perfection; all three of the headliners, and nearly all of the other bands, were spot on. Bon Iver and Beck were the two greatest shows this Owl has ever seen. If you know what’s good for you, you’ll be at The Gorge next Memorial Day weekend to see founder Adam Zaks outdo himself yet again.