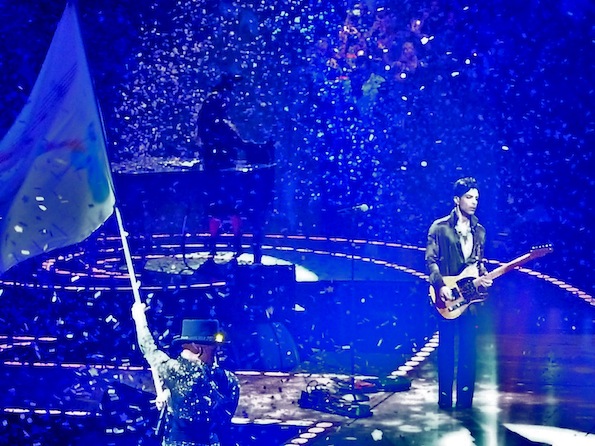 There’s really no need to write a review of last night’s Prince show at the Los Angeles Forum. Seriously, what do you think went on last night? Think he played “Purple Rain”? He did. Think he had a visually stunning stage setup, glyph and confetti included? Check. Think he pranced and preened about said stunning stage oozing preternatural sexuality, grace and talent that puts any other 52 year old to shame let alone 25 year olds? Is the sky blue? Think he’s got a small army of some of the finest musicians as his side arms? Are you new? 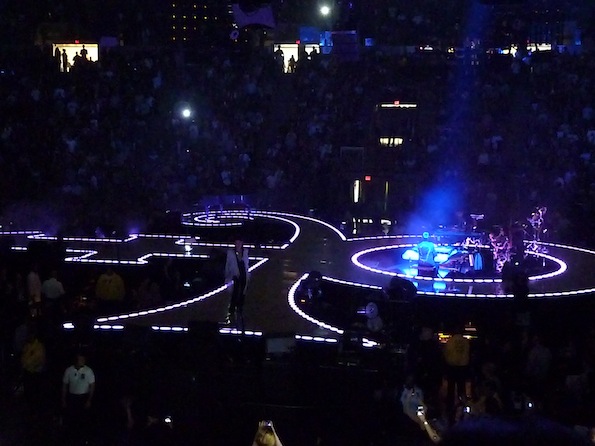 Fine. Night #2 of the LA version of the Welcome To America tour went a little something like this:

Replacing the notorious raunch with the mentally and spiritually erotic has not dimmed the allure of the man’s musical offerings – know that. The lovemaking began with a jazzy intro leading to Prince stage-strolling/marking his territory, alternating between slow drag sashays and something akin to low-crawling. What followed was the incense burn of “When Eye Lay My Hands On U” and at some point I could almost feel him doing so (Or maybe that was just wishful thinking. Don’t judge me.). Tripping through his catalog for a hit filled and fan friendly show (and yes, there was medley play and snippets of covers), Prince offered up perhaps the most engaging take on the live show. The in-the-round (on the glyph?) setting gives way to high interaction between performer and fan, and Prince took advantage of being able to get in our faces to the front, rear and sides of the house. Thirty years into this career and the man is still busting fine ass moves, hitting notes high and low and peeling his guitar to the tune of making grown folks lose their minds and even the normally restrained-too-cool-to-act-a-fool VIP section got airborne when we were collectively told to jump. 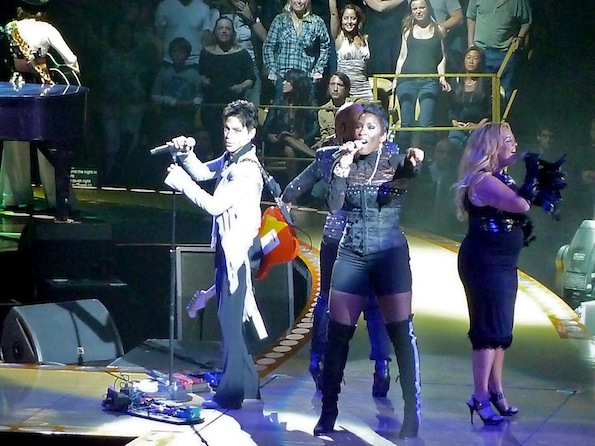 Beauty in the moment, a humble Prince reflected on the myriad of musicians and athletes he had seen over the years at The Forum which speaks of his reverence for people, places and things of historical significance in his world, including but not confined to music. Commanding that we had better not allow any lip synching in The Forum after tonight was a timely nod towards the music that once was and the music that now is. Time hasn’t been kind to The Forum over the years and Inglewood ain’t exactly The Sunset Strip; music, sports and other events have moved on to find other facilities to accommodate their needs and expand their audience and market. But here in the now, Prince is seeing fit to inject some energy and electricity into the community with a light and joyfulness that’s downright tangible. Yes, you can physically feel the music reaching out to you through the newly groovier “Little Red Corvette” to the humanity encompassing sing-a-long of “Everyday People” to Sheila E’s percussive authority on “U Got The Look” to The Time’s “Cool” with bits of MJ’s “Wanna Be Startin’ Something” spliced in.

Prince is well aware of how connective the threads of music are, how they’ve bound his fans to him, him to them and them to one another. Hell, I even caught myself doing the fricking hand gestures during “I Would Die 4 U;” it was instinctual and started happening before I knew it was happening. My first thought was, “Oh shit, I remember how to do this?” only to realize that my head, heart and left hand never forgot. As retro/old school as the bulk of the set list was, Prince and his cohorts (stellar band, dynamic backup singers, dancing twins) have been uniquely able to freshen up the tunes into danceable rock celebrations of participation (we were instructed to “clap on the 2” and “sing another 16 bars”) with ample homage to being rooted in black soul music. While light on the religious/sexual experience guitar shredding that a body like me craves, the remarkable qualities of showmanship and musicianship, of which he has no equal, are the reason why the seats get filled. Repeatedly. 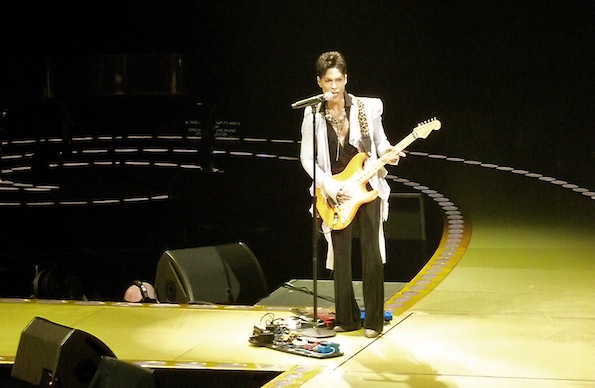 Yes, he still looks like he main lines waters from the Fountain of Youth and every physical gesture from stroking his hair to coyly/devilishly eyeing the crowd to gentle hip rolls to his permanently extended pinky reeks of a deft sensuality that only he is qualified to wield. And every time that he smiled (which was freakishly often yet stunningly beautiful), I felt like I was musically falling for him all over again, just as I did way back when during those uncomfortable teenage high school years. Three hours and three encores deep (per the requisite clap/stomp/cheer/scream for more) and the night closed on me with fatigued legs because once the show began, I never sat down. Yes, the man is “Forever In My Life.” 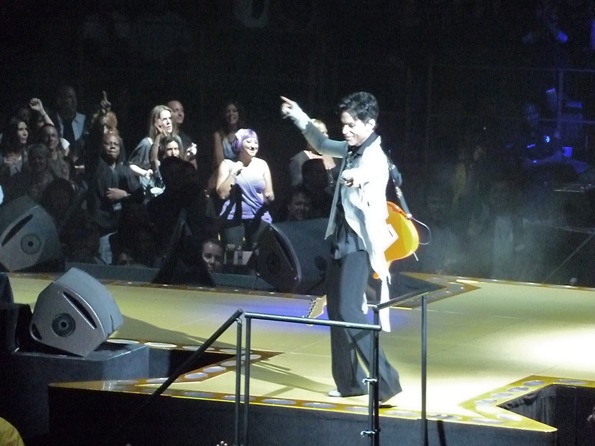 April has been a quality month for music; a lot of the credit for that goes to The Foo Fighters. I know that seemingly has nothing to do with the price of rice in China but last night it struck me out of the blue, and the parallel seemed timely and on point: Prince and Dave Grohl have more common than just “Darling Nikki” and “Best of You;” they’re both musicians whose sheer love of the live performance is so real that you can taste it. Both look like kids in candy stores when their feet hit the stage as they give up and off a feel good that has kept and will keep their fans lovers of their extraordinary live shows.