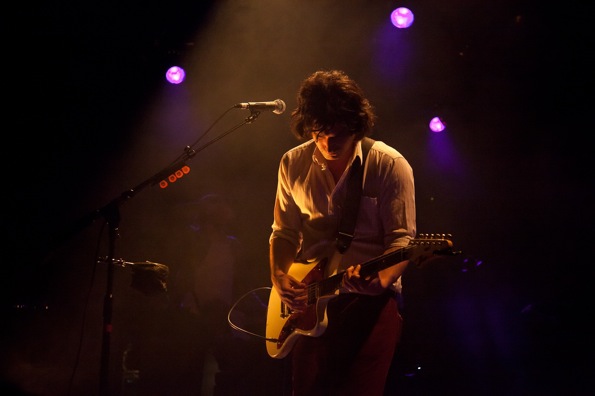 Pete Yorn took the stage at Regency Ballroom last night to promote his new album, a rerelease of 2001’s Music For the Morning After. I guess I should start by saying that I was really excited about this show- not only because of Yorn himself, but also his opening act, Ben Kellwer, both of whom I used to listen to during my later teenage years. I’ll fully admit that I haven’t kept up with either of them; the last time I saw them play a show (separately) was close to 10 years ago. At the time, when I was 16 or 17, I loved this stuff. Any type of melancholy rock n’ roll record that was released, I ate up. What I didn’t consider before walking into the Regency, is that I am no longer a teenager and my music tastes have changed considerably… so I am going to try to go through the review of this show in the mindset of 17 year old Ann and what she would have thought.

Yorn opened his set by going through a tiny handful of songs from his self-titled record, which was released last year, before launching into some of his bigger hits from that infamous album, Music For the Morning After, that was heard on contemporary rock radio all through out 2001 and 2002. “Life on a Chain” had the entire crowd singing along, and probably reliving moments from 9 years past. A few minutes later, Yorn launched into a more mellow song, “Just Another,” which showed his, as well as the crowds, more sensitive side. Looking around the venue, it was like a scene from a cheesy movie: boyfriends holding their girlfriends’ hands and the singles representing their lack of a love life by quickly downing a glass of whiskey.

One thing that I do enjoy about Pete Yorn is the positivity he expresses in most of his songs. His lyrics are sweet and to the point- no bullshit, it is what it is. His words and acoustic guitar combined release rays of sunshine throughout the crowd. With or without his band, Yorn always sticks primarily to his acoustic guitar. In my opinion, it’s his trademark. In my head, his guitar is always with him… and if I ever saw him on the street without it attached to him, I’d think something was wrong. That being said, it was up to Yorn’s second guitarist, Mark Noseworthy, to provide a different texture to the show.

All together, Yorn played for 70 minutes or so, splitting up songs from newer albums, but focusing a lot of the time at the Regency on the rerelease of 2001’s album. Yorn looked like he was having a good time, but it was obvious he’s tired of playing the older songs… though in his defense, after 9 years, wouldn’t anyone? The show was simple and sweet; 17 year old Ann would have been writing in her LiveJournal about it as soon as she got home. If you’ve never seen Yorn, I do recommend giving him a try. He’s got a great voice and he won’t bore you. However, personally, next time Yorn rolls into town, I will give him the best of regards, but most likely pass on the show. It was nice to relive the middle of high school through his songs for one night, but now that I’ve done it, it’s time to move on.