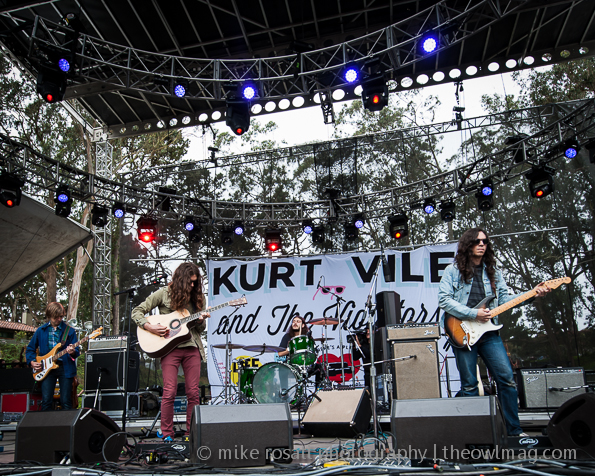 The Only rival To the Men in terms of classic rock excellence over the weekend was Philly guitar prodigy Kurt Vile and the Violators (such an awesome band name). Where The Men are shouting at you, Vile plays it cool. At certain points during the set, he could barely be bothered to keep his left hand on the guitar, it kept slipping off and hanging by his side, as he deftly picked at his instrument. If you weren’t up close, it would have been difficult to fully appreciate his skill level on the guitar. The energy for his set was a little low, but it’s a speed Vile feels comfortable in. “A Girl Called Alex”, and “KV Crimes” prodded along with heavy self assurance. He did a great solo version of “Peeping Tomboy”, and ended up going over his set time by five minutes. Some stage hands frantically tried waving him off, but Vile wasn’t concerned and played a little longer once he noticed the guy trying to flag him down. 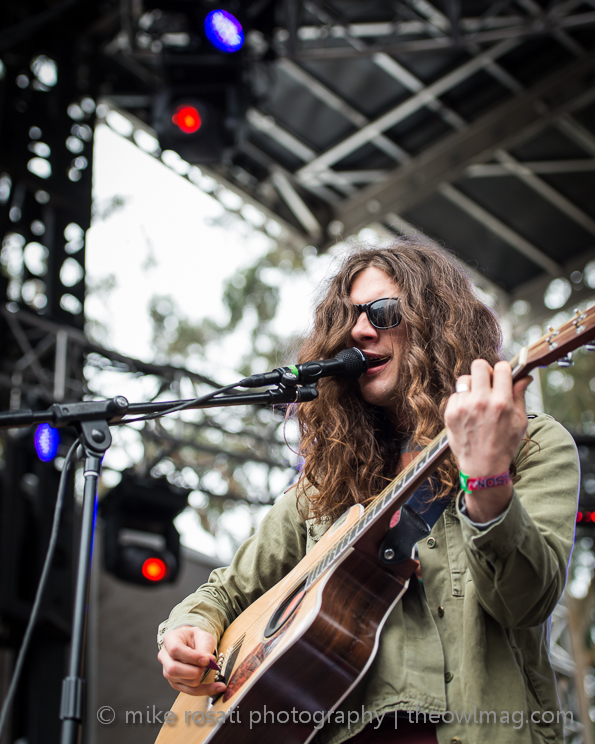 I got a tip from a writer that works for Stereogum that The Head and the Heart were playing a “secret” show in the woods. In between Choco Lands and Outside Lambs, on the hill side of McLaren Pass, the Head and the Heart played an intimate acoustic set with a hundred people watching. It had a great 60’s San Francisco vibe. The band started inviting people on stage to sing along to “Lost in My Mind”, at one point stopping the music, as the band and crowd harmonized “whooo hoooo oooo”. Besides “Maps” by the Yeah Yeah Yeah’s, It was the goose bump inducing moment of the weekend. 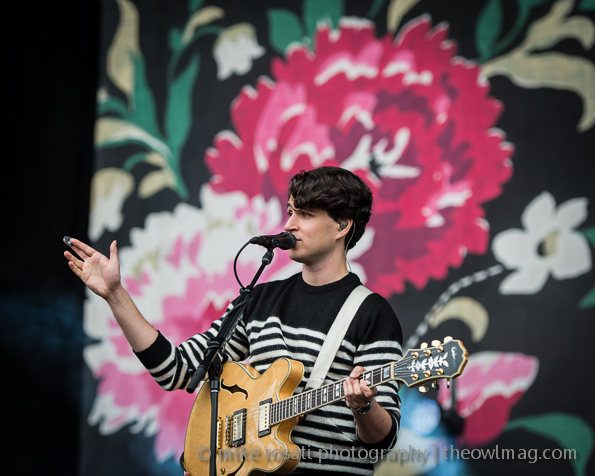 After releasing the instant classic Modern Vampires of The City earlier this year, Vampire Weekend is making their case as one of the best bands in the world right now. Confident and professional, the guys hit the main stage and played choice tracks from their impressive discography. Front man, Ezra Koenig explained that many people in their songs are from the Bay Area and broke into “Step” which was inspired by Bay Area Hip Hop Legends Souls Of Mischief. “Hanna Hunt”, “Ever Lasting Arms” inspired impassioned sing alongs by the crowd of 65,000+. “Giving up the Gun” and set closer “Walcott” had the entire Polo Field dancing and jumping around.

Hiding them over on the Panhandle Stage did nothing to mute Deap Vally. Working extensively from their upcoming debut LP, Sistrionix, the LA guitar and drums duo of Lindsey Troy and Julie Edwards has been touring exhaustively, from making an impression at the Glastonbury Festival to opening for the Yeah Yeah Yeahs. They sawed through their set, pulling in passerbys until the dimensions of the stage area overflowed. Deap Vally’s blues based attack veers towards White Stripes/Zeppelin territory, but songs like “Walk Of Shame” and their anthem “Gonna Make My Own Money” put their own indelible stamp on it.

Matt and Kim have spawned a cottage industry from modest means, with a handful of simple electro-clash albums in the last few years. The draw here was their live reputation as party starters of the first order, and in the sundown slot, they delivered; offering up a set that exceeded expectations. From the moment of their exuberant arrival, they came out hard and just kept pushing the pace up. The front of stage area was a seething grooving mess, and Kim just egged them on harder, exhorting crowd surfers, and later, taking her traditional booty dance to the crowd, perched precariously on the hands of the faithful.

Picking highlights is a tricky business, but “Block After Block” and “Let’s Go” stood out from the pack. Their overall message of empowerment and self-determination through the Ministry Of Partying gives Andrew WK a run for his money, and the most interesting fact of all was that female crowd surfers outnumbered males by about 5:1, and they seemed to be having the time of their lives. It was hard not to notice between songs, the big dopey grins on the duo’s faces, and that might have been the biggest takeaway of all: In a weekend of self-serious indie bands clogging up the main stage, Matt and Kim embodied the pure joy of performance.