Things didn’t look good arriving at the Oakland Music Festival, soaked through from the rain and trying to find the music venues. The first big storm since May damaged the outdoor stage and looked like it would ruin the day, but within a few hours, the rain had stopped, the stage was fixed, and the music was thumping. The rough start couldn’t stop the performers from putting on a terrific show. It resembled a block party, the festivities spread across a couple blocks with one outdoor stage and one indoor area.

Most of the performers were local, with a few from other cities in California.

Dead Klown Society opened the festival with their funky and punky dance music. Without clown makeup and back after a long hiatus, the band’s fiery performance got the early crowd off their feet. The red clown hair made for interesting visuals. 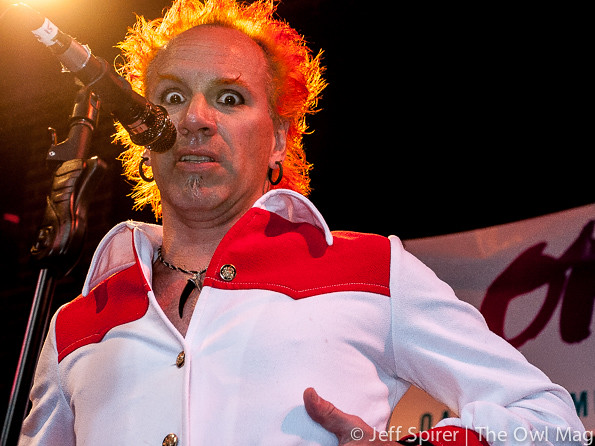 HNRL put four rhymers out front in a rock-infused hip hop set. In what was to become a theme for the day, the mashup of rock, DJs and hip-hop got the crowd bouncing. HNRL served up one of the oddest covers of the day when they played The Cure’s “Lovecats.” 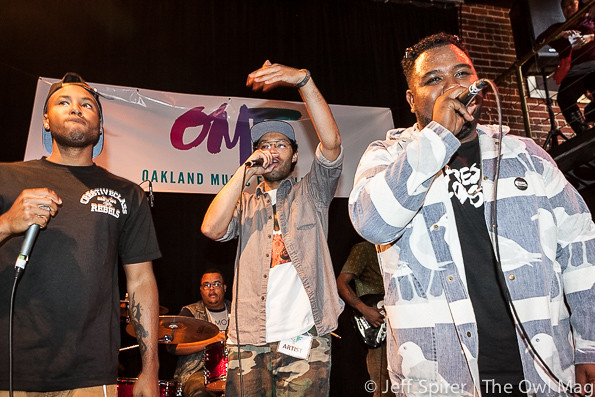 Another rock-hard hip hop performance came from Vokab Kompany. Reminiscent of The Fugees but with a harder edge, Vokab Kompany brought unusual instrumentation to hip-hop, with bass, drums, and, yes, electric violin behind the two vocalists out front. 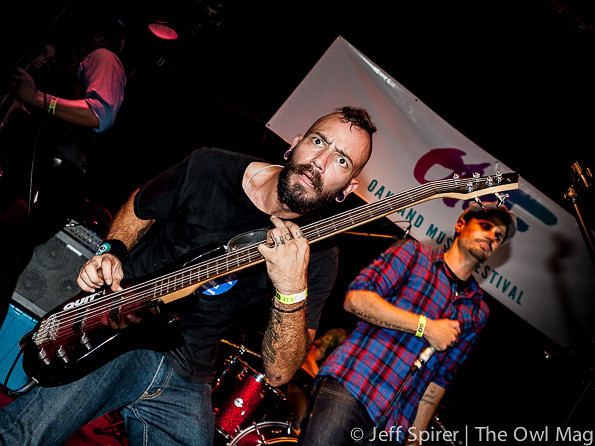 On the outdoor stage, there were more upbeat acts, so upbeat that it could have been the 2013 version of the Summer of Love. J-Boogie‘s Dubtronic Science mashed up just about everything from hip hop to funk to dub. Aima The Dreamer, who we last saw opening for Mik Nawooj at the Brick & Mortar, was a terrific addition to the crew. 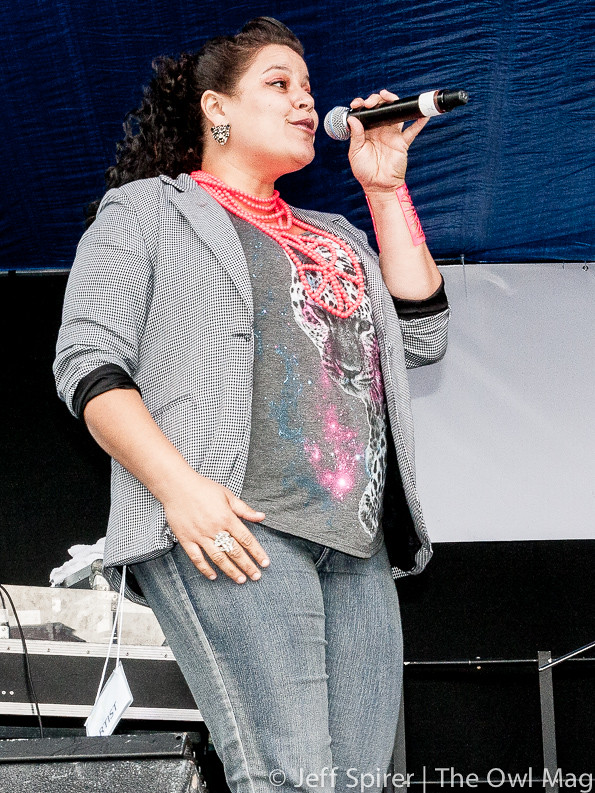 Suns Of Temple brought a vocal-free guitar-driven electronic dance performance to the outdoor stage also. Alton San Giovanni is a guitarist to remember, backed by drums, keyboards and electronics. 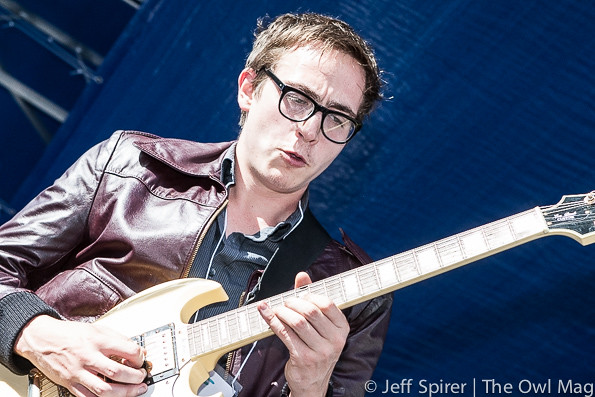 In a more somber mood, Kev Choice and his ensemble brought a classical feel to hip-hop, with cello and violin behind Kev’s piano. Strong lyrics and vocals fronted the chamber orchestra-meets-rock-meets funk backdrop. 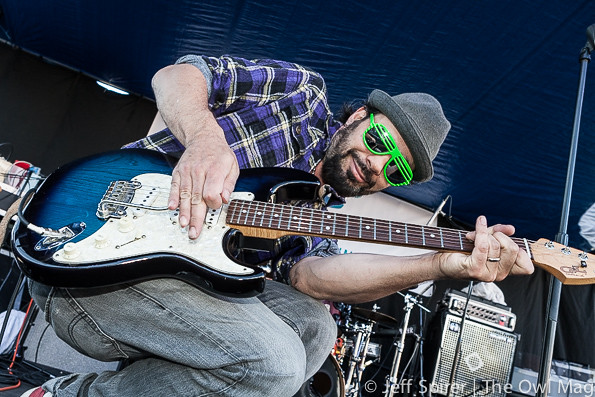 Bang Data‘s Latin hip-hop was another up-and-dance performance led by vocalist Deuce Eclipse and percussionist Juan Caipo. Long pigtails swinging, Eclipse sang and rhymed in English and Spanish, at one point asking the audience if they were cool with Spanish, and, answering his own question, said “Yeah, we’re in California.” 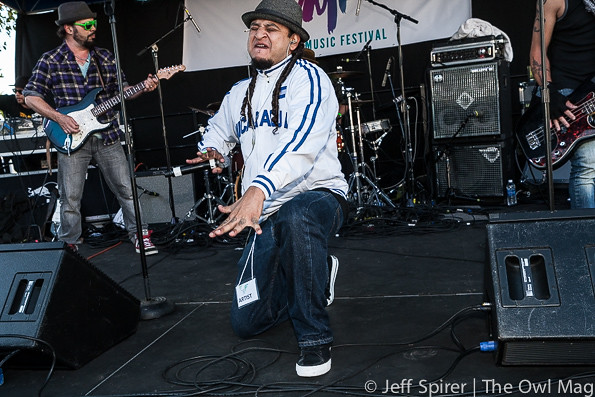 Back inside, James & Evander played electro-pop and sang about getting high. Well, we know we’re in the Bay Area. 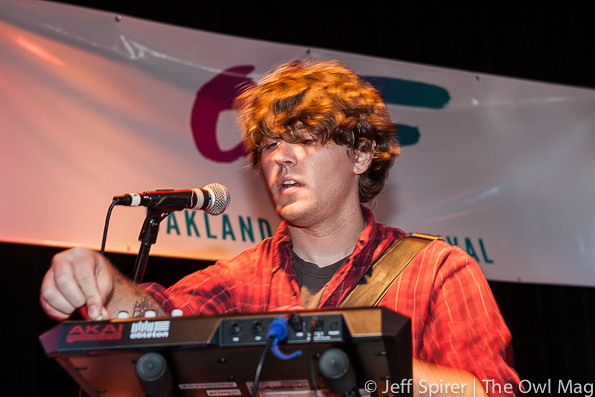 Probably the strangest performance of the day came from Religious Girls, a trio that included drums and keyboards and word-free vocals that mimicked dying animals. There must be a way to describe their music, but we haven’t found it. 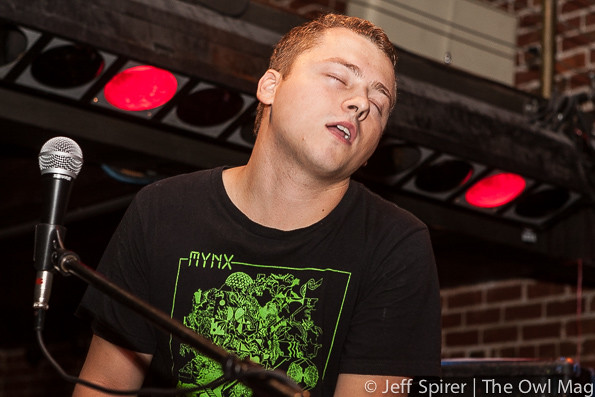 The Coup headlined, but due to the weather-related late start, didn’t play long. Too bad, they would have been terrific and a tribute to Oakland.

Check out more awesome photos from the festival HERE!