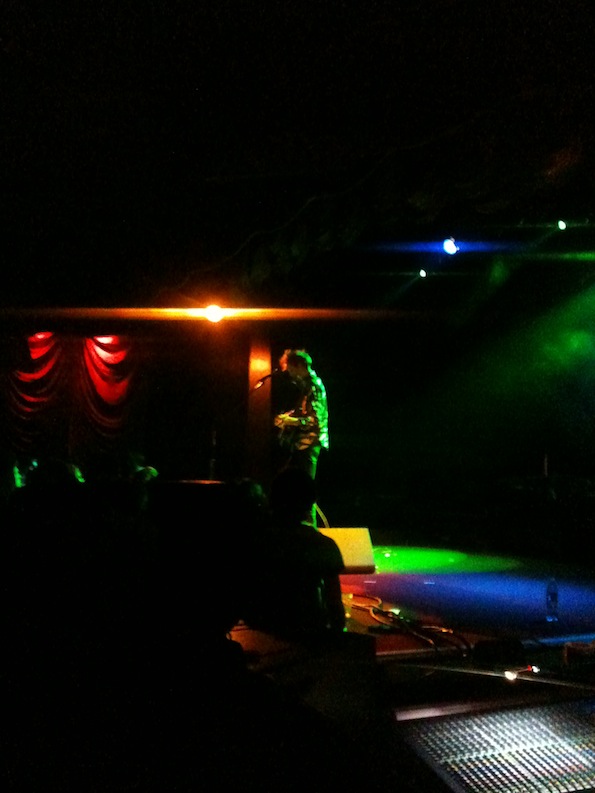 It’s impossible to predict what will happen at an Atlas Sound and Deerhunter show. In my experiences covering Bradford Cox, the only given is that there will be some radical music, but what happens in the space between is anyone’s guess. Not that Deerhunter would ever be described as business-like, the band routinely breaks into free-flowing 15-minute jam/drone sessions at their live shows, but generally Cox is a bit more structured when he is accompanied by his bandmates.

At a Bottom of the Hill show a few years back, Bradford got drunk for the first time in years and ended up accidently nailing his guitarist, causing a bloody nose, and later taking requests. Half of the audience started filing out before the show was over, I thought it was exhilarating and risky. At the Great American Music Hall for Noisepop 2010, Cox was streamlined and brilliant, packing in a dense show of awesome tracks, and playing songs from Deerhunter‘s (then) forthcoming record Halycon Digest.

Saturday night’s show at Bimbo’s was a compromise of the two previous shows. Cox took the stage in skinny jeans and a flannel shirt just after 11PM and broke into several tracks from his excellent recent record Parralax. “Te Amo” sounded perfect, and “Mona Lisa” got the crowd moving. “Shelia” from Logos was the best track of the night, and exemplified Bradford’s talent as the track changed tempos, and he ripped at his guitar.

Towards the end of the show he covered a track from The West Coast Pop Art Experimental Band, and when asked who knew who wrote that song, a thirteen year old answered correctly. Bradford was impressed and decided to bring the kid on stage. At this point Bradford confessed to having an existential experience and felt like he was having a conversation with his 13 year old self. His advice “If you’re a homo, stay away from heteros. If you’re a hetero, stay away from homos.” This was obviously tongue and cheek, Bradford is openly gay and having fun with it, and the kid was a good sport and nervously laughed along. The whole scene lasted about twenty minutes and the crowd started getting restless.

Bradford said he had four or five other tracks to get to, but only played one due to time constraints. The last track was “Terra Incognita” with the 13 year old remaining on stage playing percussion. It was a cool moment, even if some of the audience was a little displeased that they didn’t get to hear more tracks. With Bradford, expression and spontaneity will trump structure, and from an artistic standpoint it’s always interesting.