Just because it was the weekend didn’t mean we could relax; this Owl was up early for KEXP’s free sessions at the Doug Fir lounge, catching Dinosaur Jr. play an all-request set and Milo Greene bring the house down before lunch. 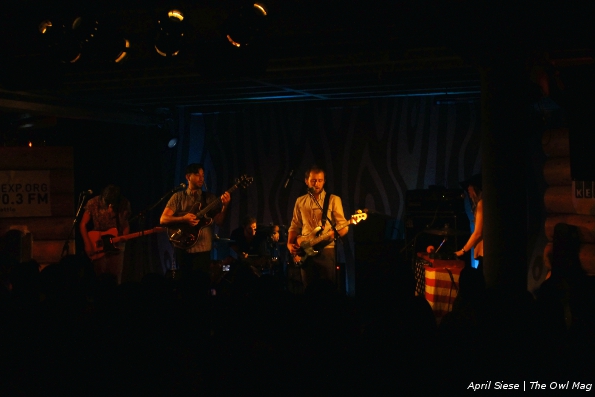 Later in the day it was back to Pioneer Square for MusicfestNW‘s only sold-out headlining show with AU, Starfucker, and Girl Talk. AU was idiosyncratic and engaging, deftly switching from serene indie to Stevie Wonder‘s “I Wish,” which songstress Holland Andrews handled beautifully. The local duo had a full band to complement their ever-expanding sound. It’s a shame that as an opener more people didn’t get to see them. 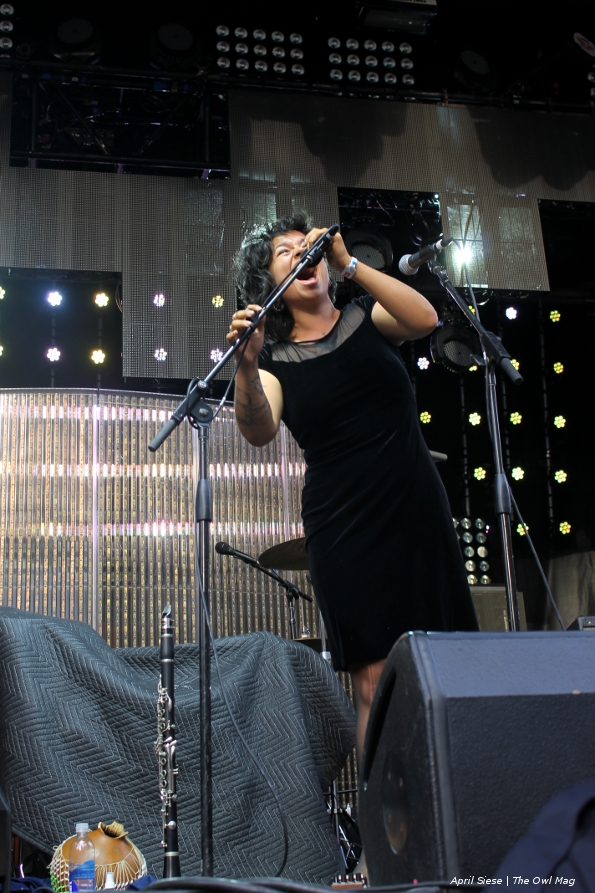 Starfucker was one of the sets I was most looking forward to but when the band took the stage, something was missing for a good first half of their set. Frontman Josh Hodges seemed lethargic, almost pained when busting out hits like, “Rawnald Gregory Erickson the Second.” It wasn’t until he got behind the drum kit, which was set up in front of a long LED wall (their new toy) that synchronicity followed and the band really started jamming. 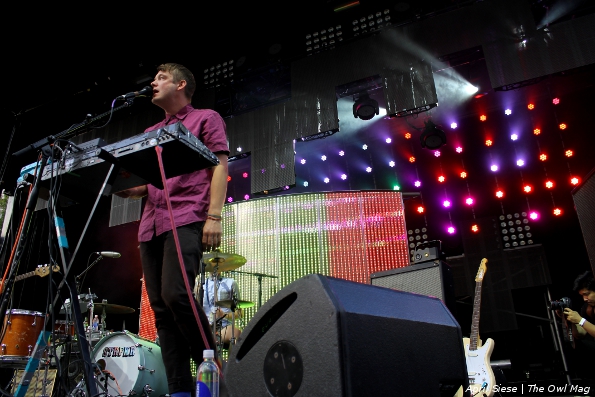 Though AU and Starfucker had the honor of playing for a hometown crowd, Pittsburgh’s Girl Talk was clearly who everyone at Pioneer Square came to see. I’ve caught many a Girl Talk set and this was by far the most gimmicky. Not to say it was bad; far from it. Mashup king Gregg Gillis quickly said hello and got the crowd going with what he does best: intricate mashups of countless songs condensed into one jam. A dance party took over on stage with fans and bands twirling and gyrating while the rest of the crowd was treated to toilet paper. As in, a leaf blower rigged up to shoot the stuff everywhere. Balloons went flying, Girl Talk kept spinning, and all was right with the world. 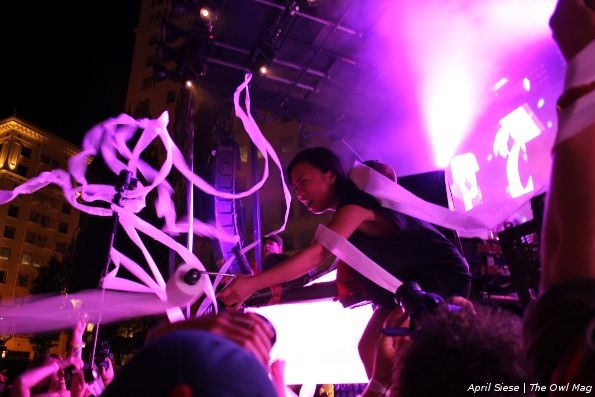 Sadly what wasn’t right was the sound quality for the much-hyped DIIV. DIIV play a careful mix of intertwining vocals and guitar and something was not right at Ted’s. The band exudes talent and has a killer stage presence, but righting the partially grating levels would’ve done wonders for their set. After a few songs, it was time to move on. 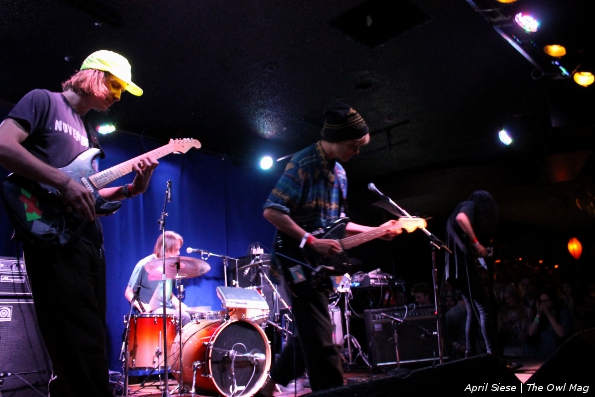 My evening ended with the queen diva herself, Big Freedia. Not just as a New Orleanian but as someone who loves to get down, there’s nothing better than a bounce show and for the second year in a row Freedia owned the stage and gave Portland something to shake their asses to. Last year saw Big Freedia at the somewhat cramped Dante’s. This year she got an upgrade at the roomy warehouse Branx where music app Deli Radio had their booth. Sponsorship and a booty battle? Not bad at all. 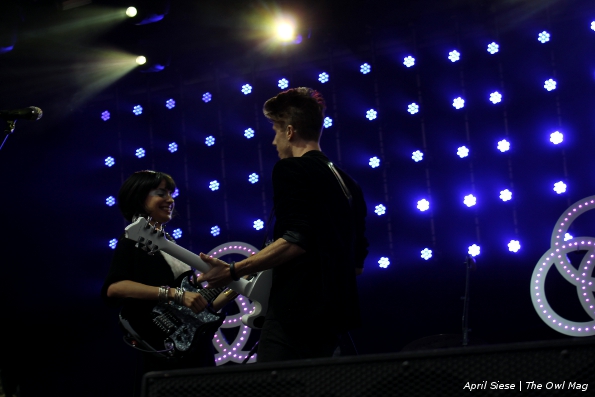 The next day saw epic sets at Pioneer Square from Atlas Genius, School of Seven Bells, and Silversun Pickups. Though I sadly missed Atlas Genius, School of Seven Bells more than made up for things with a stellar set mixing debut hits with new material off their latest release Ghostory. Frontwoman Alejandra Deheza was electric in her performance and even had a silver stripe painted across her face to match the quirky set. Watch out tUnE-yArDs face paint, there’s a new trend in town. 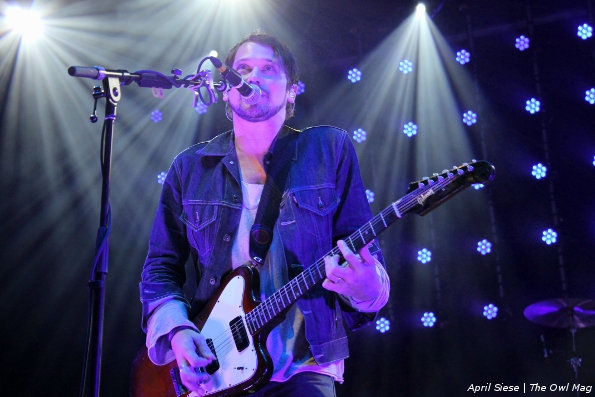 Finally it was Silversun Pickups who wrapped up MusicfestNW 2012, playing hits “Panic Switch” and “Lazy Eye” and laying into each song with nimble guitar solos and driving bass. Bassist Nikki Monninger is very much pregnant with twins, her sweet stage presence and spot-on playing made for fantastic banter with frontman Brian Aubert who joked that he’d be naming one of her children Superkid. Throughout the weekend lighting was an important component at Pioneer Square and Silversun Pickups‘ set utilized it beautifully, ending their set and encores with a wall bearing “SSPU” written out in lights.

It was a strong end to a festival that’s changed so much from even a year ago. While I can’t speak for the daily tech summits and most of the KEXP sessions, what went on in the evenings was pure magic though dangerously close to overtaking the venues Willamette Week has so carefully chosen. If MusicfestNW is to continue to expand, capacity may become even more of an issue, making the festival more a pain about town than opportunity to explore Portland; ’til next year!