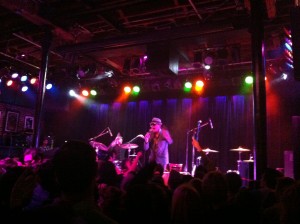 Opening for the funk-tastic fake persona of Ricky Reed, was the Bay Area’s own multi-talented hip-hop artist and supreme beat-maker, K. Flay. Her indie mashups (the Decemberists creeped in there at one point) and all-over-the-place style kept the crowd eager and on-edge. There’s something about that K. Flay. She’s got what it takes to make it.

The main event was nothing short of a shitshow. With the recent departure of drummer, songwriter, and stage presence, Arjun Singh (who left to become a Bollywood actor — no joke), I wasn’t sure how Mr. Reed would be able to perform without him. But let me tell you what, not only is his replacement amazing, Wallpaper has stepped up his game. Higher energy, funnier jokes, and even exceeding his recordings on multipleÂ occasionsÂ (“#STUPiDFACEDD” is exponentially better live than on track). For future reference, if you plan on seeing Wallpaper, bring your party pants and your dancing shoes, and don’t look back.