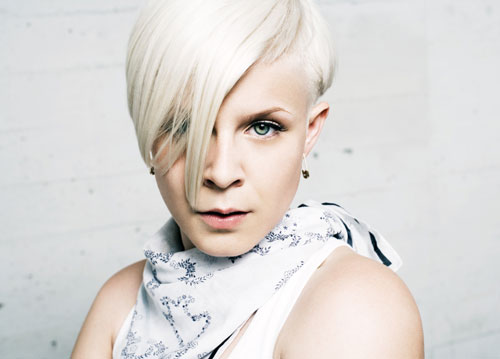 Robyn practically arrived via spaceship Saturday night at Radio City Music Hall. White lights flashed on stage and space noises vibrated through the dark theater as her band mates took the stage dressed in white lab coats. Robyn emerged moments later, welcomed by raucous cheers and clapping from some 6,000 fans. Her two drummers and two keyboardists broke out into the apropos song “Time Machine” while Robyn sang and danced like a maniac. The hour-and-a-half show went by at warp speed thanks to her highly entertaining dance moves and hyper-active energy. Although she was dressed in multiple layers of clothing and platform construction boots, she raced from one end of the stage to the other and ran up and down stairs, in order to high-five and shake the hands of audience members, including the ones up in the balcony. Her set was chock-full of songs from her recent release, Body Talk, like the cautionary “Love Kills,” the sweet “Stars 4-Ever,” and the heartbreaking “Hang With Me.” Robyn was bursting with love the whole night and proudly announced that it was the first time she had headlined a venue as big as Radio City. She closed the show with an encore of Abba’s “Dancing Queen” and transitioned into her old international hit “Show Me Love.” As people grudgingly filtered out of the theater, I overheard someone say, “That was worth every cent!” and I definitely have to agree.