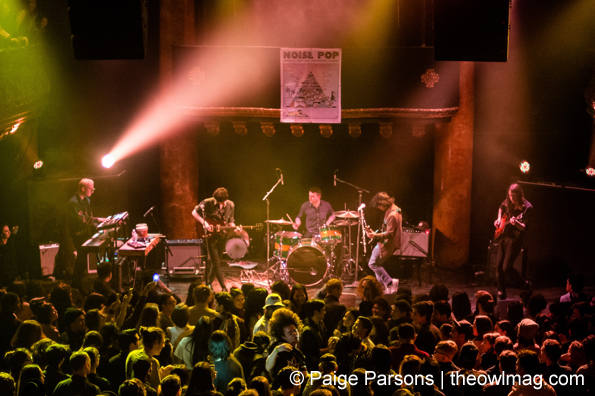 Noise Pop is in full effect in the city, and Wednesday Nights show popped with energy showing why it’s a great time for Independent music.  We thought we were arriving early, but there was already a line down the block at the Great American Music Hall at 8pm. After a bit of a wait, we got in and the venue was half full giving the impressions that not all of the kinks had been worked out between the venue and the festival (the Will Call line was especially affected).

The Central Valleys Craft Spells headlined, and their dreamy pop had the audience in a daze.  The tempo was notably faster than the studio records and the audience loved it. Lead man Justin Vallesteros appeared visibly emotional by the crowd’s reaction, and playing in front of friends and family.  “Dwindle” sounded great, as did “Komorebi”.

The minor nuisance of the line was quickly forgotten once inside.  Cotillon was the first band we saw. Their energy was good, and the audience bounced along to their layered sunny inspired beach pop. “Call Me Up” was a standout, and the youthful vibe was charming and loose.

The Belinda Butchers were next up, and seemed polished and practiced.  The mood was heavier (their debut album was inspired by the diary of a young Japanese woman who drowned herself to be reunited with a dead lover, written between 1836-1864). Despite this they seem poised for big things, with universal teenage themes at the heart of their music.

The Belinda Butchers and Cotillon exemplified the spirit of festivals, and the benefits for showing up early.  We were unfamiliar with both of these bands prior to the show, but left as fans.