Live 105’s Not So Silent Night was a damn great show. Part of its success, besides there being a bunch of insanely talented artists, was the variety: in one night we were graced with the presences of Young the Giant, Bush, Florence + Machine, Mumford & Sons, and, drum-roll please… Green Day! There was no time to be bored. During the set changes they had karaoke for the audience members, and even if they weren’t people you particularly wanted to hear, they were a good laugh. 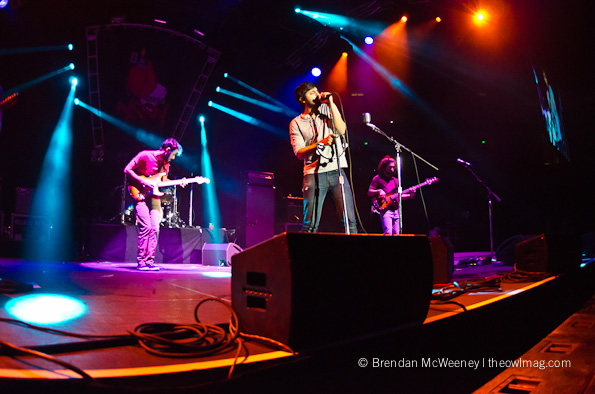 Young The Giant
The night started with Young The Giant and it just got better and better. Frontman Sameer Gadhia floated onto the stage. The stadium wasn’t full yet by any means, but that didn’t make the tiniest of difference to him. He sang, eyes closed, tambourine in hand, heart on his sleeve. Gadhia bared his soul into the mic. “Thanks for coming so damn early,” he said. Their harmonies were beautiful and the instrumentals layered with distortion produced a welcoming, yet melancholy sound. When they played “Cough Syrup,” it seemed the audience was glad they had come out so early. 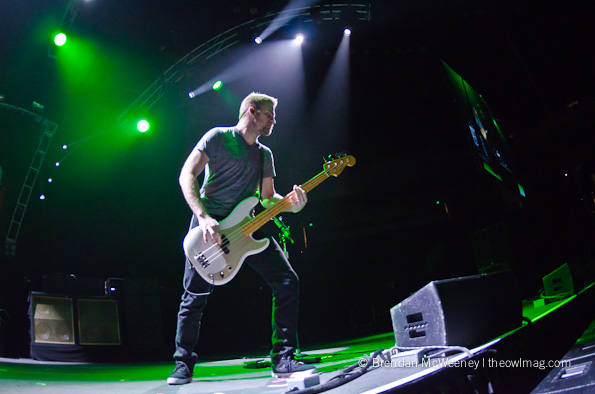 Bush
Bush was the rum to a cup of holiday eggnog. Their performance was so powerful that it moved the audience: no really, Gavin Rossdale moved the audience; he jumped off stage and literally ran through the crowd and all around the stadium. Along the way he serenaded one lucky girl who couldn’t help but fall prey to his crooning. Their guitar riffs were somehow pure, but also forceful. Back against back, Gavin and Nigel Pulsford (guitarist) shredded their hearts out. They surprised the audience with a heavy, darker version of “Come Together” by the Beatles and had four out of five heads rocking the fuck out. 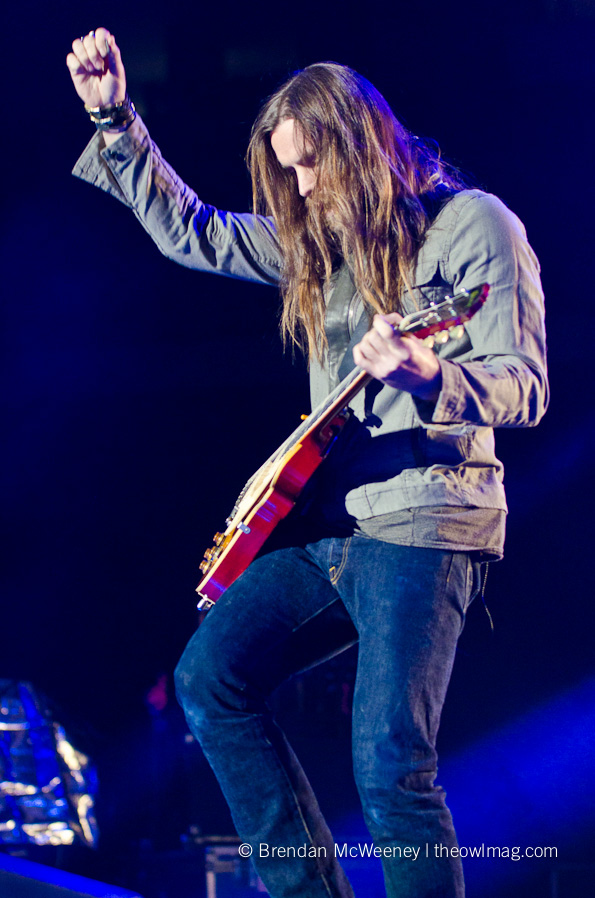 Bush
Ah, Florence + Machine. I cannot fully articulate Florence Welch‘s presence and performance because it was so complex. What I can say is that everything about her cast a spell on the audience that night — her dress, her entrance, her movements, and above all, her vocals. I almost couldn’t comprehend her singing: how she could get so high and sound so eloquent and consonant, all at the same time, and all throughout her singing she carried the presence of a poised little girl who was dancing through a field of flowers with no inhibitions. 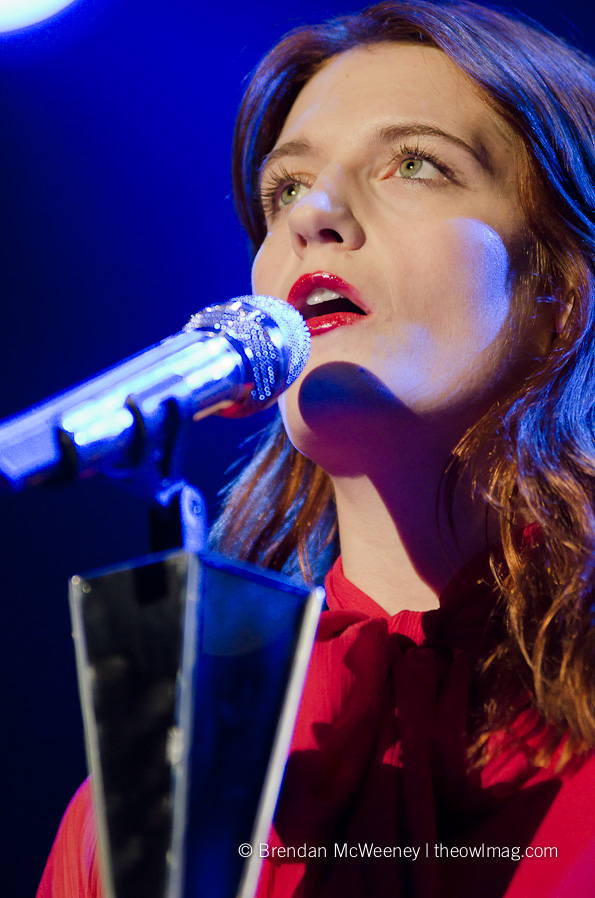 Florence + The Machine
I think that’s one thing that is so alluring about her: the fact that she seemingly is so unruffled by the chaos around her. And for just a little while, she brings us all in with her. Florence danced around the stage, ran to the sides and sang to us the secrets of her soul. She moved her arms perfectly in sync with her music and became a part of the sounds she perfectly crafted. She had us all in the palm of her hand. 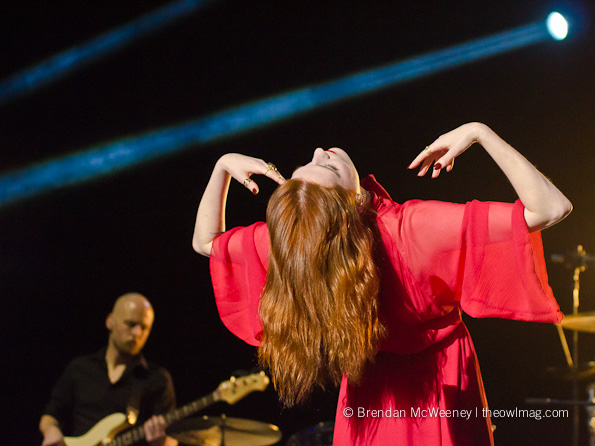 Mumford & Sons are undeniably talented. Their harmonies are unprecedented in that not only do they complement each other perfectly, but their placing is flawless. The nature of their songs are already so artfully designed that when they perform them, there is no room for anything but glory: banjo-infested, upright bass-infected, foot-stomping glory. They deliver everything to the crowd. Marcus Mumford stands at the mic, guitar or mandolin in hand, kick drum at his foot, with a boyish grin on his face, signaling that he is having a hell of a time. 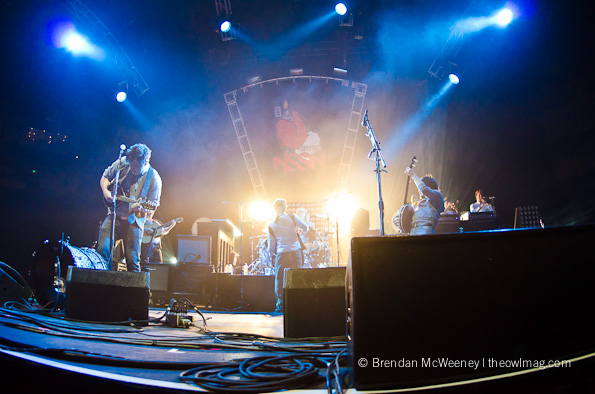 Mumford & Sons
Ben Lovett wore a raccoon hat, which he so often does during shows, and has his own party on the keyboard with so much energy that he almost knocks it over. Even Ted Dwayne found a way to rock out with his instrument by raising his huge upright bass above his head. They performed a new song “Lover of the Light” in which Mumford sings and plays drums. With their usual undertone of moral confliction, this new song brought even more respect from the crowd, if it was possible. 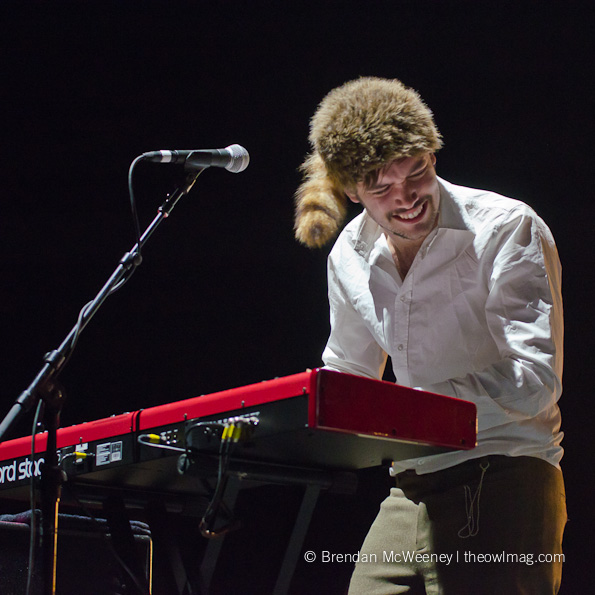 Mumford & Sons
Green Day was an unexpected addition to the night. Because Jane’s Addiction had a family emergency, we got to see the trio that gave us “Boulevard of Broken Dreams” and “Basketcase.” Green Day brought us youth. Billy Joe was his goofy self, signaling for us to yell “AY! AY! AY!” and when we weren’t loud enough, sitting down and propping his head on his hand like he was bored. “About six hours ago we knew we were going to play here tonight,” said Joe. Last-minute they were, lacking they weren’t. 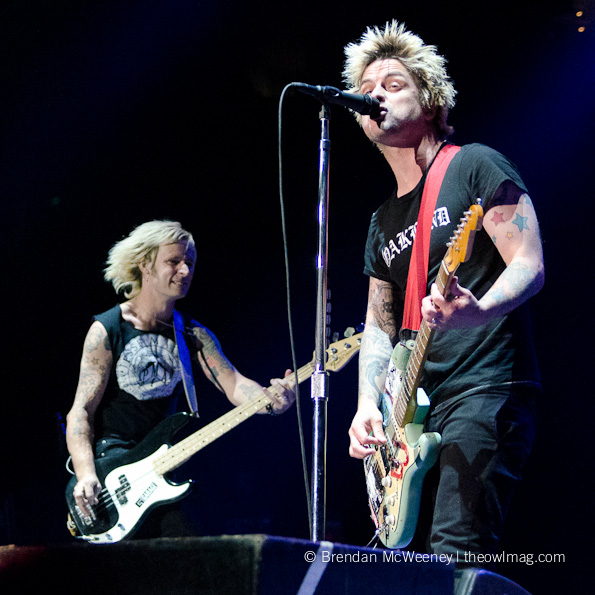 Green Day
Watching Joe and Mike Dirnt run and jump around the stage, I realized that they are people that will probably never lose that child-like spirit. At one point, Joe slid through Dirnt’s legs, still playing and singing. The crowd sang loud with them during “Basketcase,” and their vocals were charged with that type of teen angst that can only come from Green Day. It was drummer Tre Cool‘s birthday and Joe got us all to sing to him and then right after said “fuck that shit,” and dove into another song. That’s kind of how Green Day is: spunky and impulsive, and it makes for a great performance. 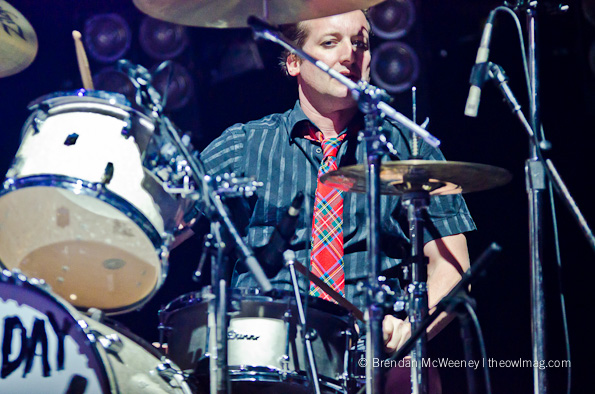