The L.A. 101 Festival had food trucks lined up outside the Gibson and free admission for the afternoon outdoor set schedule, but it seemed that the most anticipated part of this fest was the indoor set schedule.

Delta Spirit took the indoor stage first and played heartily with their various percussion (i.e. trash can lid and tambourine) instruments. Their crowd may have been scarce, but they were enthusiastic. Built To Spill followed them up with carefully thought out guitar melodies and a smooth sound. Their clear love for their art form played out in their style. Kudos to those responsible for stage set up. It was impressive how quickly the stage was transformed and ready for each band in less time than it took to stand in line and grab a beer. 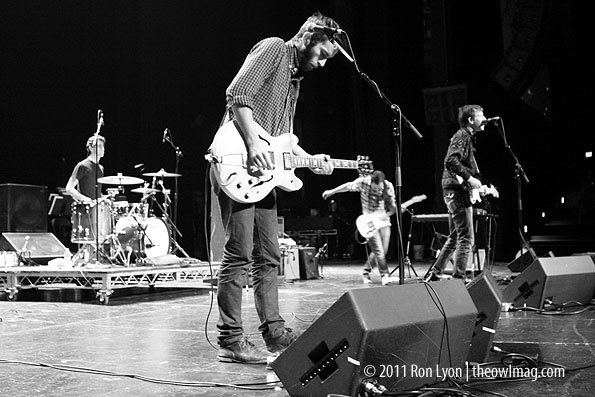 Tokyo Police Club
Tokyo Police Club was up next and I did a double take when I saw them doing their own pre-performance sound check. They started their set by putting their hands in over the bass drum and cheering just like a kids’ soccer team would do, then launched into a standard TPC opener “Favourite Colour.” Although the guys seemed a little off tonight (possibly due to the flight from Canada they were on just a few hours earlier), frontman Dave Monks was chatty and playful with the crowd, asking us to clap with BOTH hands. Fair warning to brace yourselves ladies: Dave cut those precious locks of hair, but don’t fret; his handsome face holds up under any hairstyle. 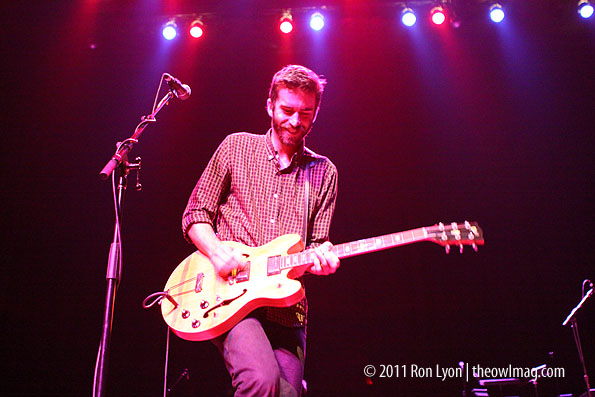 Tokyo Police Club
The whole band seemed to be genuinely enjoying themselves on stage. They did not end up slipping in any of their recent covers or even the TPC show staple “Bambi,” but the performance was fun and I was sad to see them leave the stage. 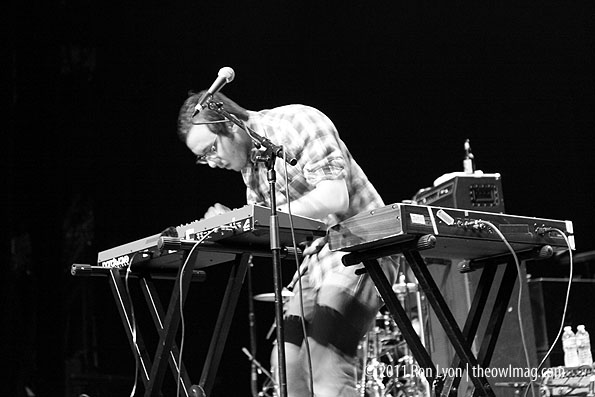 Tokyo Police Club
Last, but certainly not least, the highly anticipated headliner, The Airborne Toxic Event had the well-dressed, sophisticated crowd they pulled in abuzz, as trees (reminiscent of their latest album cover) were pulled onto the stage alongside the instruments. Anticipation skyrocketed as the full orchestra took the stage. 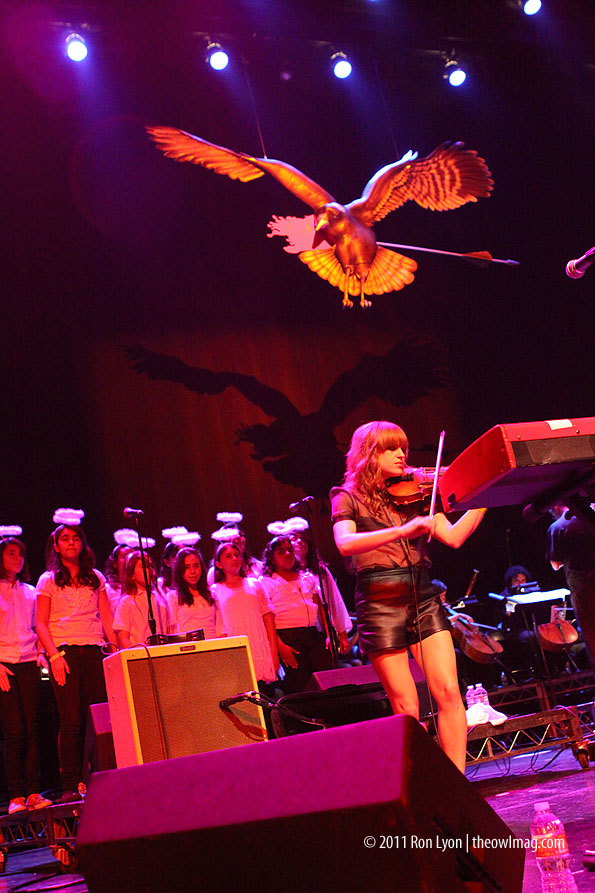 The Airborne Toxic Event
Frontman Mikel Jollett and TATE sweetheart Anna Bulbrook kicked off with a beautiful dramatic intro into the first song that had this crowd beside themselves right off the bat. The girls’ choir took the stage in all their angelic glory, complete with halo headbands, and started dancing to the passionate upbeat stylings that The Airborne Toxic Event are known for.

That scarce crowd mentioned earlier tripled in size and way more than tripled in energy. The entire set was breathtaking from Bulbrook fervidly playing her viola on her knees to Jollett’s heartfelt political statement about the meaning of democracy. 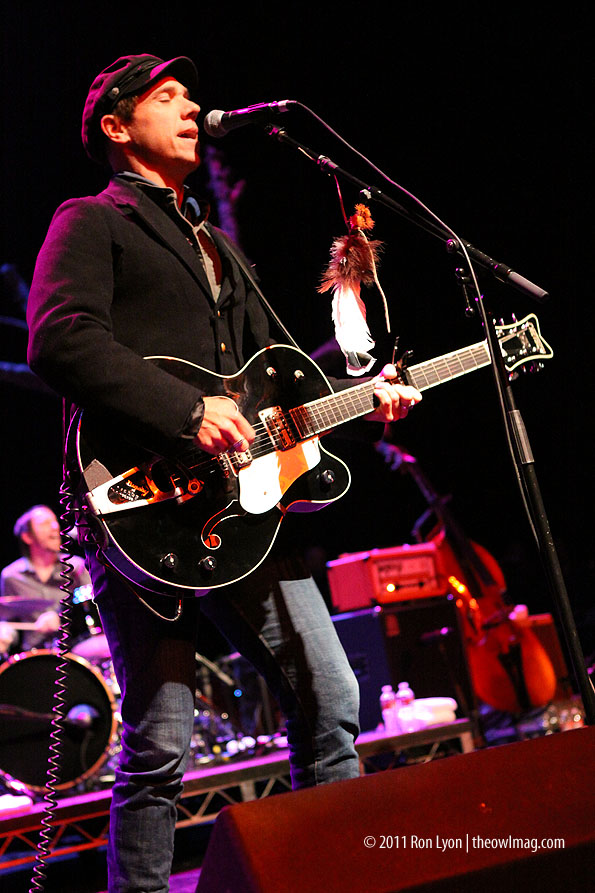 The Airborne Toxic Event
While most of the show was heart-wrenching and exquisite, Jollett was easily able to break things up with audience interaction that was very well-received, especially when he left the stage to go deep into the crowd. And The Biggest Audience Reaction Award goes to “Sometime Around Midnight.” 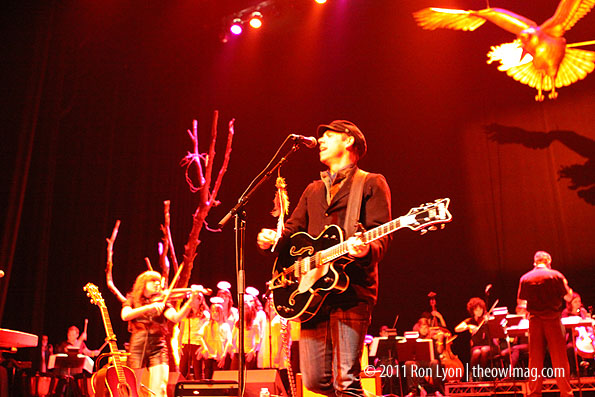 The Airborne Toxic Event
The show ended with an exciting encore that began with a gracious and humble Jollett mentioning that this is a long way from Spaceland (raise your hand if you still call it Spaceland, too!). He dedicated their cover of Bobby Fuller’s”I Fought The Law” to the LAPD and literally ended the show with a bang (of blowing confetti) sending their fans home for the night on Cloud 9. 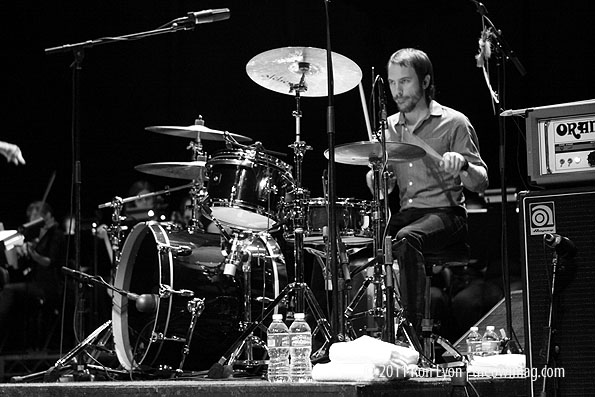