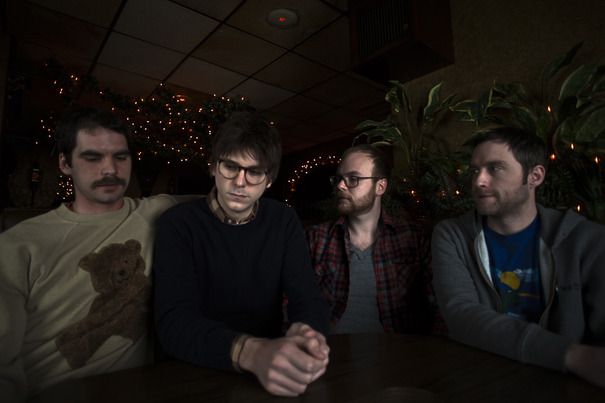 A show in San Francisco’s Mission district? Whaaat? There aren’t even venues in The Mission. Maybe a cool band will grace the ATA once in a blue moon or a kick ass band will rock a DJ set at Public Works, but a good Mission show is a rare and wondrous thing.

Enter Brick and Mortar. A dinner/nightclub (Lavende Lounge)-cum jazz club (Coda)-cum rock venue. Brick and Mortar is a new venue in The Mission that’s gathering some serious indie points. Starting with hosting Sub Pop’s Jaill on Thursday night. There’s nothing like a good rock show to bring about the end of the week.

I had originally requested to review the show, but was denied. In my typical elitist fashion, I then second guessed even going to the show. I decided that I should get back to my scenester roots and hit up the show regardless of being on the prestigious list. We paid to get in and immediately remembered why we love the music scene. Walking in to Jaill hammering through one of their songs. The crowd was sparse, but devoted. They gathered around the stage and danced like crazy.

Jaill is gritty yet sophisticated, loud and inviting, blistering but accessible. They’re an exciting and familiar sound, just like being at Brick and Mortar, old and new all in one. They powered through their songs as if they were trying to get through their two albums, like a kid that’s exited to share an awesome mix tape on a road trip that’s shorter than the album. The show was well worth the money.

As soon as Jaill left the stage, lead-singer Vincent Kircher melted right into the audience and we were able to catch a word with him. Remarkably, Kircher knew my name and I came to find out that I had indeed been put on the list to cover the show. Well shit, I hadn’t brought a note pad, taken any notes, or done anything except enjoy myself at the show. Hence, no pictures with this story. But that’s how Jaill rolls. On their tour, things were going well until they were slapped with van trouble, then a less than stellar show in LA and dwindling funds due to gas prices. None of that seemed to hinder their performance. If anything it fueled their raw energy on stage.

Jaill has managed to fly under the radar for quite some time, playing small venues, blazing mini tours and keeping the underground rock scene alive. Even going to far as to release a limited edition, hard-to-find cassette tape. How fucking rock ‘n roll is that? They’ve since signed to Sub Pop records, added an extra “L” to their name and are generating some serious buzz. Jaill is a show not to be missed, but there are only a few more chances including the Sasquatch festival on May 30th.