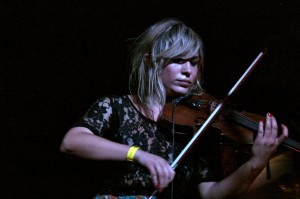 It’s the evening of April 27th and San Francisco’s Bottom of the Hill is bursting at the seams. I was pressed against the stage by a kid and his parents on one side and a gaggle of hipsters on the other, all eagerly awaiting the arrival of the Head and the Heart. “Called Seattle’s next big band” by NPR, the folk-pop sextet has quickly wound its way into the world’s hearts and headphones. They’re defying the odds in an era where bands have to fight harder than ever to be heard above the din.

The plucky Seattle transplants have built their success on a do-it-yourself spirit and heaps of local love. Amid a swirl of positive press, their self-released debut sold 10,000 copies before the band was signed to Sub Pop Records. Watching the throngs of exuberant fans, it’s no surprise to me that Fleet Foxes’ label paid attention: the Head and the Heart is clearly on to something. 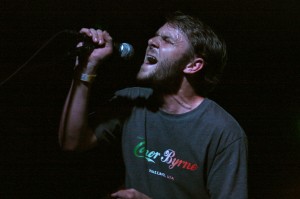 Beginning their set with “Cats and Dogs,” the band played songs off their eponymous album almost entirely in order. If theÂ recorded versions are already full of energy, their live counterparts are nothing short of effervescent. The band is constantly moving: Tyler Williams seems to fly off his seat behind the drums, while all three vocalists (Jon Russell, Josiah Johnson, and Charity Thielen) bounce around the stage to the beat. Even in the show’s most tender moments,Â energy continued to bubble under the surface. The softest song, “Ever Since” (one of three new tunes), was quietly stirringâ€”just Russell, an acoustic guitar, and swells of emotion. Likewise, crowd favorite “Rivers and Roads” grew from an introspective whisper to a rousing anthem for anyone who’s ever left home.

For me, and I suspect much of the audience at Bottom of the Hill, the Head the Heart’s music is deeply resonant. It reflects the joy and sorrow of life’s transitions, that sense of simultaneously reminiscing and looking forward. Though the journey is just beginning, the band has already gone through a crucial transformation: from local heroes to music’s next big thing.