FYF Fest capped its final day of 2014 business with the return of The Strokes, Flying Lotus, and Haim, putting an exclamation point on the weekend, and sealing their move from ‘little festival that could’ to genuine heavyweight.

With great power comes great responsibility, and Sunday found FYF taking the bull by the horns by responding immediately to Saturday’s issues. The fest opened the gates early, expanding their checkpoints, and handing out buckets of free water. They also opened up the closed levels of the Sports Arena and increased the food vendors within. Saturday’s action meant the poor trampled fields gave way to the inevitable dust monster, but in no way did it rival previous years, and its presence was felt most keenly at the hardcore Trees stage. With attendance estimated near six figures, growing pains were inevitable, but the fact that the festival responded immediately and not ‘by committee for next year’ earns a gold star. – Wayne Jessup 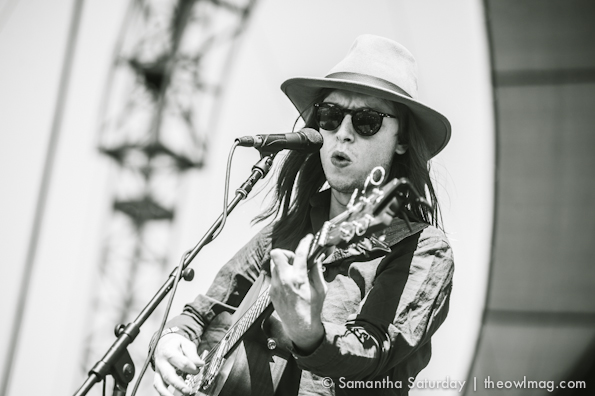 Riding high on his Cabinet Of Curiousities LP, Dutch psych-pop artist Jacco Gardner set the tone for Sunday, soothing the bruised and hungover with sweet acid-dusted grooves. Mining a Shuggie Otis groove cut with the more baroque sensibilities of Love, Gardner and his band gave a glimpse into their world with a shimmering take on “Puppets Dangling”. – WJ 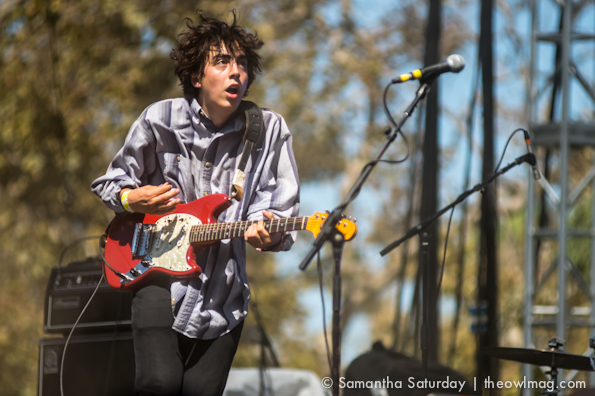 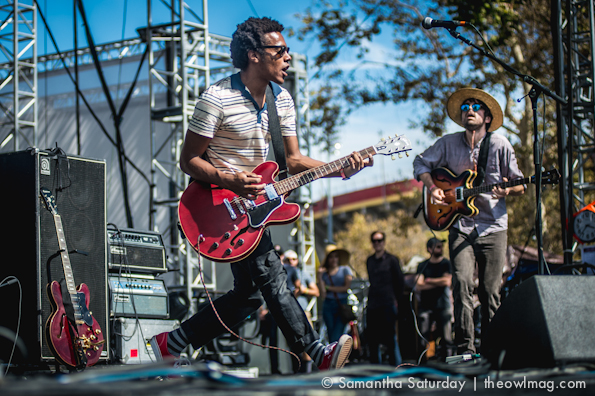 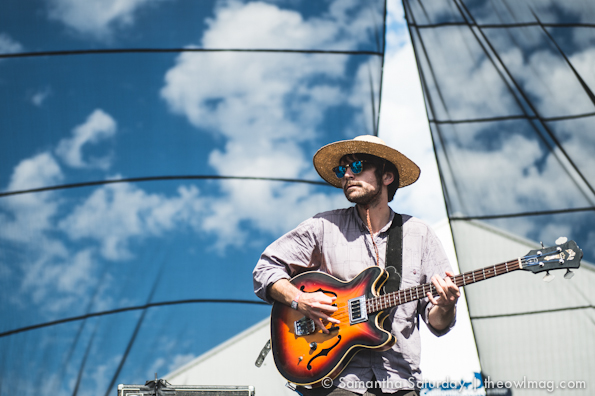 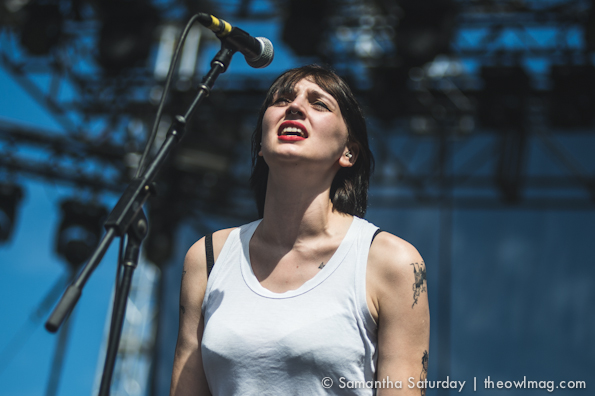 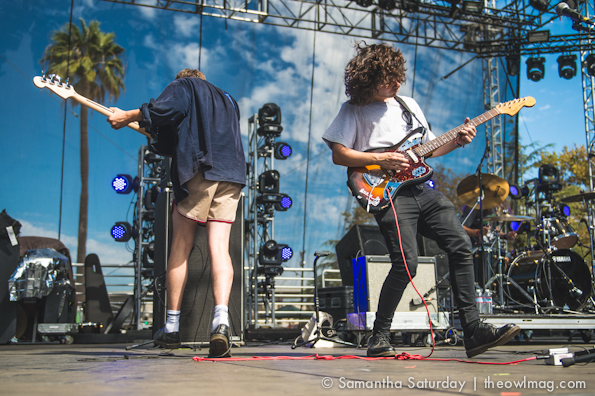 Joanna Gruesome from Cardiff, Wales raised the first notable dust cloud of the weekend, storming the stage, overloading the sound, and generally having a blast. They fought hard against the sapping heat, rolling through a survey of their debut, Weird Sister, (out on Slumberland/Fortuna Pop), with a boiling take on “Sugarcrush” being a highlight. – WJ 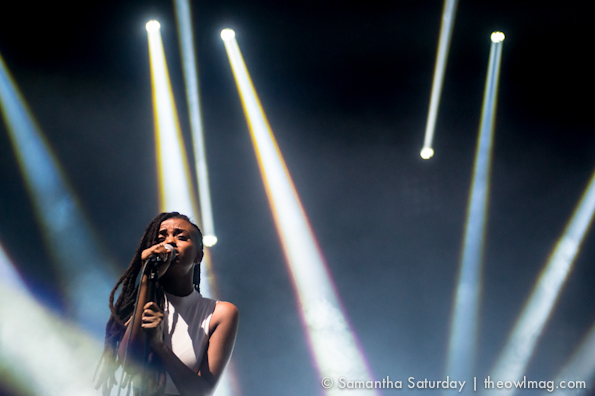 For our one stop into the Arena for the day, we came across Kelela. The young singer has been praised by both Beyonce and Bjork, a testament to her cross-genre appeal. Kelela commanded the huge stage with an impressive presence, her powerful yet ethereal voice held its own over the heavy bass. – SS 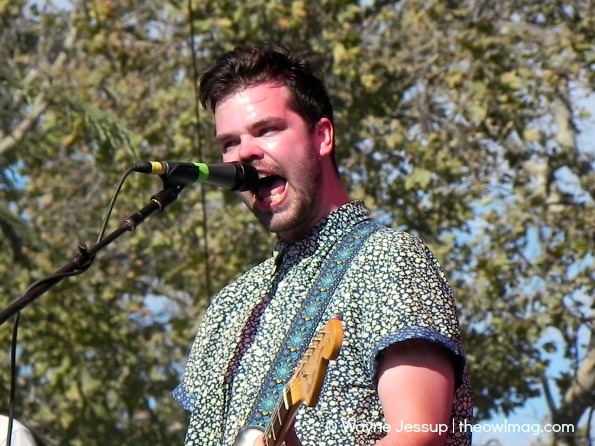 The dust had barely settled when the stage was given over to successive post-hardcore bands, both being current or alumni acts with LA’s No Sleep Records. Pennsylvania’s Balance & Composure kicked things off, with the veteran band giving the assembled faithful what they wanted. While hewing close to the mid-2000’s template, what set them apart, aside from the songwriting, was a dynamic rhythm section that swung hard for a rock band. – WJ 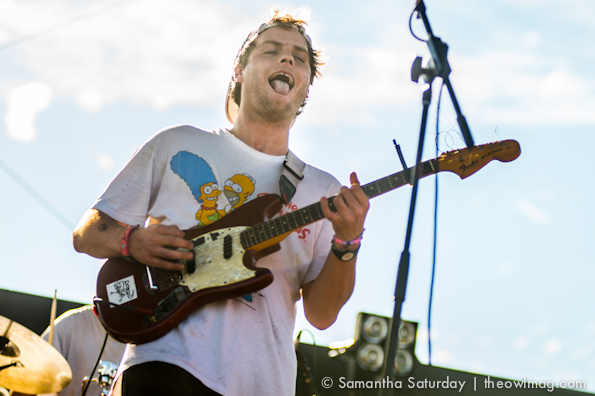 We’re torn on Mac DeMarco. We can’t get enough of his chilled out personality and we love sinking into his equally as relaxed jams. On stage, it doesn’t translate to much. Aside from a few tongue wags and DeMarco’s signature crowd surfs, there isn’t much left to watch, especially after seeing him a perform a few times. – SS 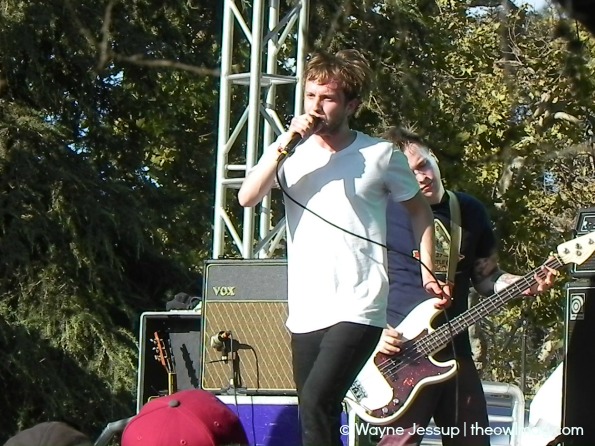 While we were rolling out of bed, getting it together, and standing in line, La Dispute were white-knuckling a late arriving flight from England, and dashing through LAX. Even with little to no prep time, the Grand Rapids, Michigan outfit hit the stage boiling, and proceeded to make a whole lot of new fans with an epic closing number. Rooms Of The House on their own Better Living label is their latest release. – WJ 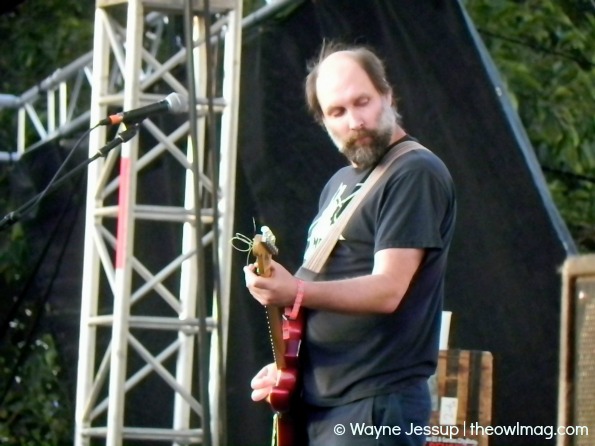 If ever there were a band for a sunset festival slot, it would be the pride of Idaho, Built To Spill. Hitting the stage with no pomp whatsoever, Doug Martsch led them on a series of guitar journeys, rambling through their history. “Life’s A Dream”, (from 2009’s There Is No Enemy), encapsulated all their virtues in one bittersweet excursion, and made all the more emotional as the sky turned pink behind them. – WJ 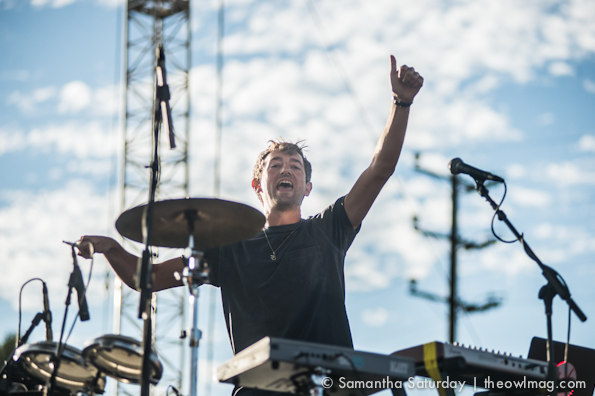 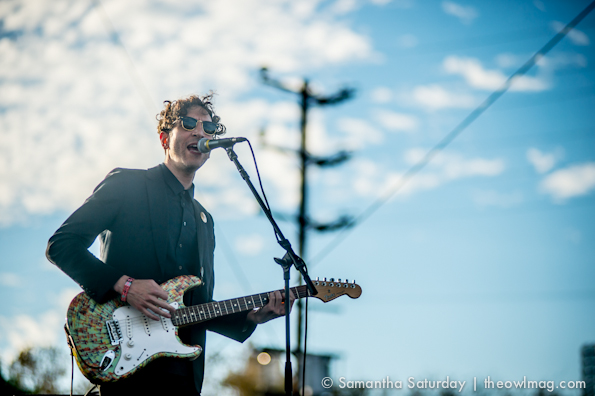 It’s no secret that The Owl Mag are long-time fans of Tanlines. We could get lost in their sunny tunes for days and are always happy to see them on a lineup. Opening with a new track was brave, but it helped pull the crowd in. – SS 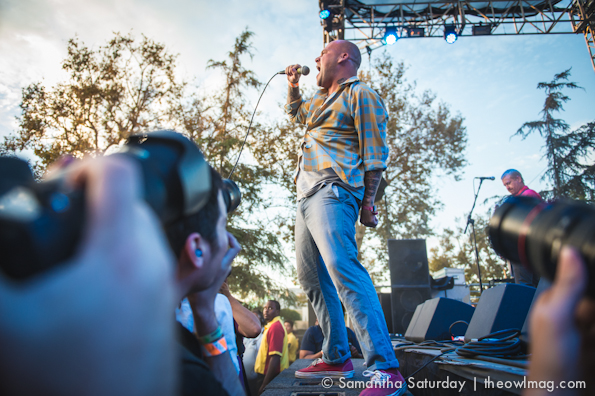 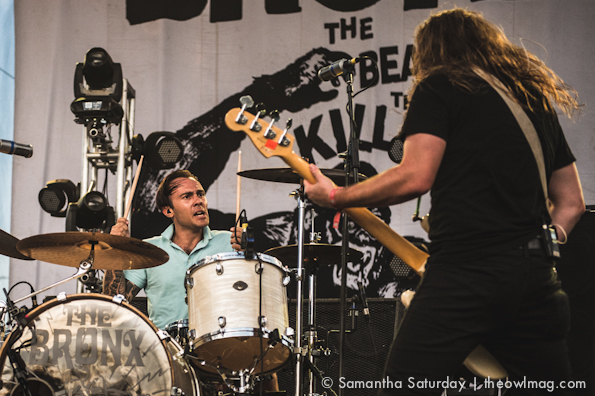 Unfortunately, we missed The Bronx‘s alter-ego band, Mariachi El Bronx on Saturday, but there was no way we could miss their full fledged performance at the Trees stage. As they took to the stage, the appreciation from one of LA’s punk staples could be felt in the air, especially when singer Matt Caughthran connected with the crowd in a triumphant stage dive. – SS 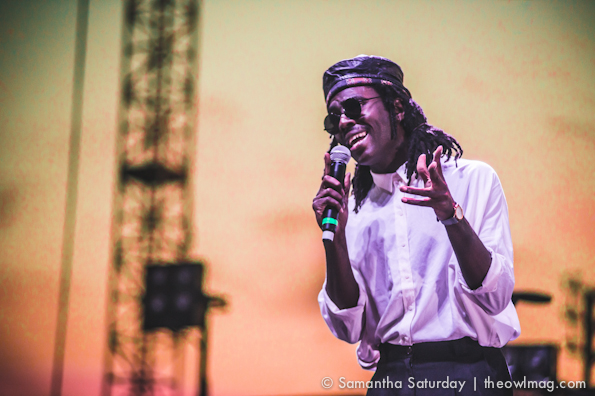 Although our bodies were aching, we couldn’t miss the perfect pairing of Blood Orange with sunset on the Main stage. Frontman Dev Hynes soothed our tired vessels with a solid set of funk fueled pop. – SS 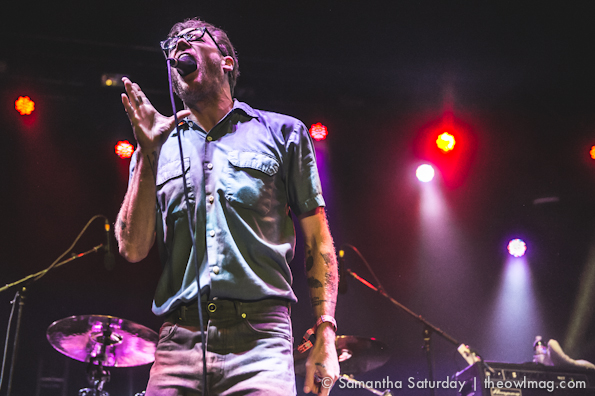 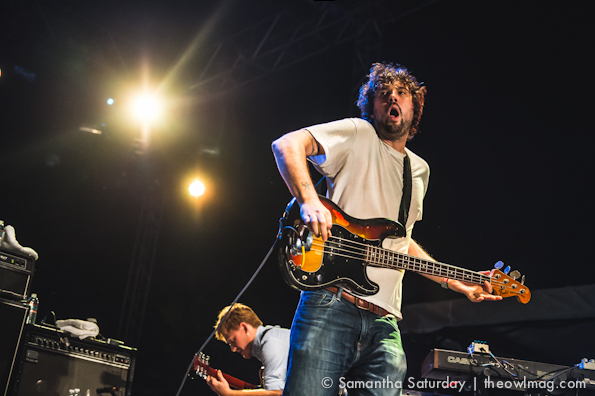 Once again at the Trees, things were about to go off. Murder City Devils took to the stage so quickly that Spencer Moody was in the crowd’s face before they knew what hit them. Another legacy act on the bill (forming in Seattle in 1996), MCD show no signs of slowing, in fact, it feels like they are picking up the pace. – SS 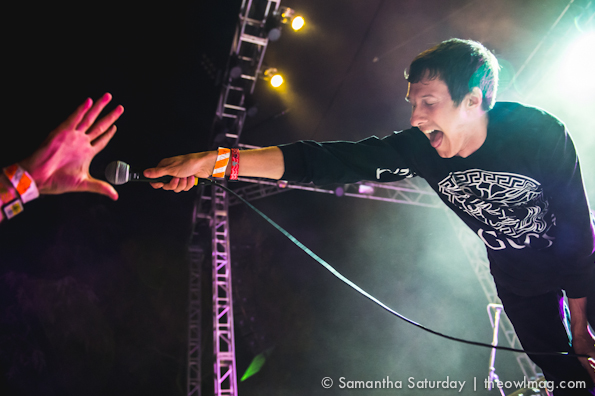 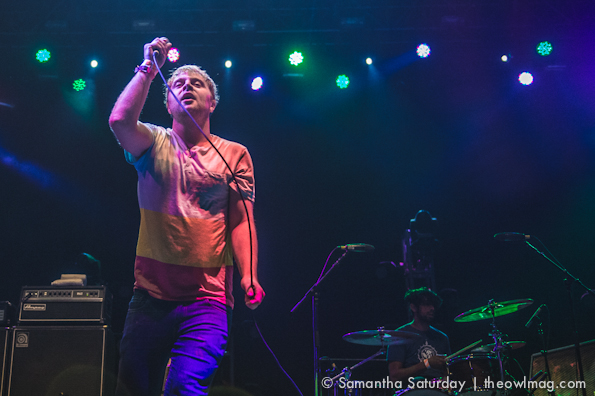 With a legacy of five albums mapping the outer frontiers of noise rock in the early 2000’s, Blood Brothers put the band to bed in 2007, and it was a coup for FYF that they were chosen as the site of the Blood Brothers reunion. Defying expectation, they were as brutal as in their glory days, pummeling a frothing crowd that produced some of the weekend’s most frenzied mosh pit action, notably on “Ambulance Vs. Ambulance” from …Burn Piano Island Burn. – WJ 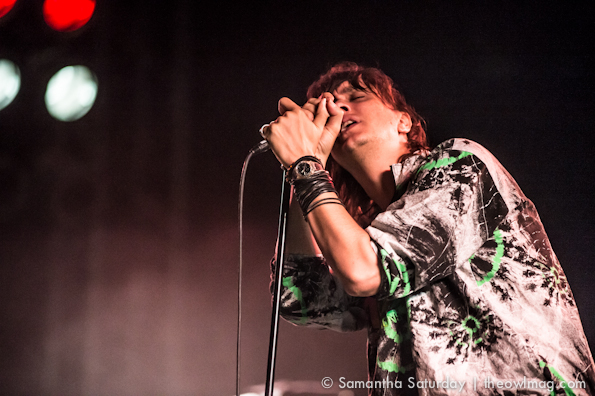 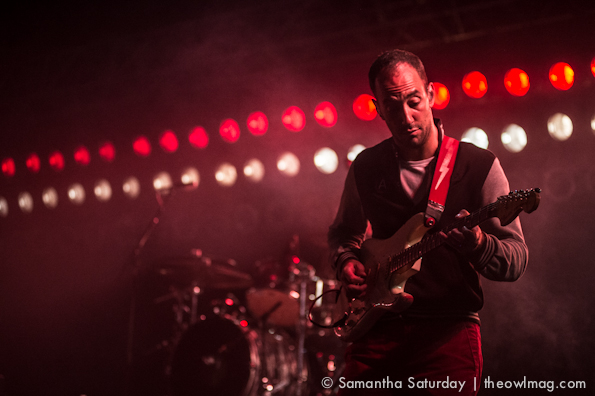 And finally, the crowning moment on this year’s FYF, the return of The Strokes. After an intensely packed crowd for Julian Casablancas and the Voidz the previous night, we were a bit wary of what might occur during the full band’s performance. Thankfully, the hasty urgency to remedy Saturday’s issues by FYF founder Sean Carlson led to a much calmer experience. Traversing their entire catalog the five-piece led the crowd to a nostalgic end to the weekend. – SS

After a weekend of whatever you’ve ingested, nothing beats Flying Lotus for the comedown. Previewing his latest forthcoming work, You’re Dead, his epic multi-media extravaganza, for all its bells and whistles, never lost sight of the soul. Even after several Flying Lotus trips, it’s still hard to believe that it’s but one man at the controls of this rocket ship. – WJ 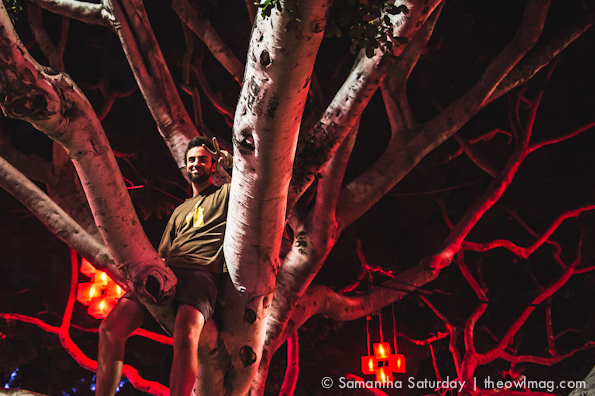