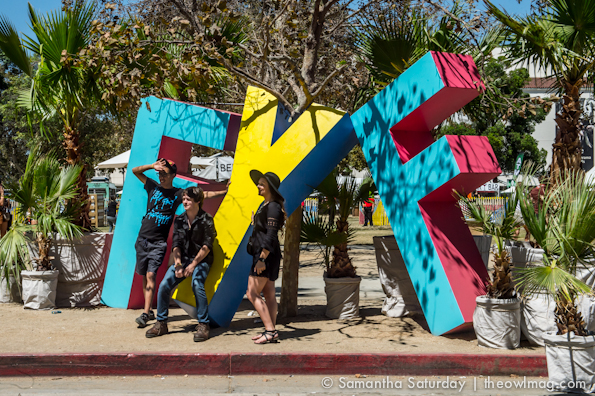 Day one of LA’s FYF Fest was marked with both its growth and the transition to a new location, taking over the Exposition Park area and the LA Sports Arena, adjacent to the LA Coliseum, while the State Historic Park of Los Angeles undergoes renovation. Record crowds, limited points of entry, increased security, and an upgrade to RFID wristbands all added up to a bottleneck mid-afternoon attendees who didn’t arrive early.

Once inside, though, the layout was smart and compact, given the number of stages, and the real bathrooms of the Sports Arena were a definite plus. When it was open. For a period of the early evening, the Arena was sealed off and admittance not allowed. The cause cited, depending on whom you talked to, was overcrowding or unruly audience members.

From there it was hit or miss: Ooh, there’s charging stations. Um, this one isn’t wired in… But, no matter how congested it became, the old “State Historic Park Mushroom Cloud of Dust” never appeared and not waking up the next day with brown snot is always a plus. Food truck game was elevated, with the most welcome sight being the mighty Cousins Maine Lobster Truck. Overall, room for opportunity, but an improved scenario, given the growth. – Wayne Jessup 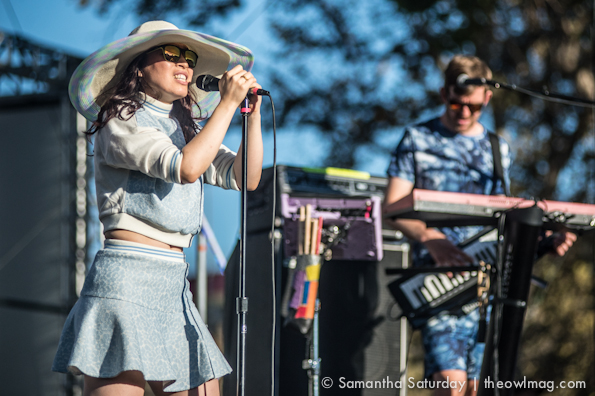 Musically speaking, once the lineup dropped, there was little doubt as to how it would go down, as FYF reached out beyond the cookie cutter festival lineups, accentuating the idiosyncratic. No matter the genre, the emphasis seemed to be on artists with their own particular vision, such as Angel Olsen, Grimes, and Little Dragon, along with welcome returns to action from Slint, Future Islands, and Slowdive. Providing the big boom at the top were Phoenix and Interpol. – WJ 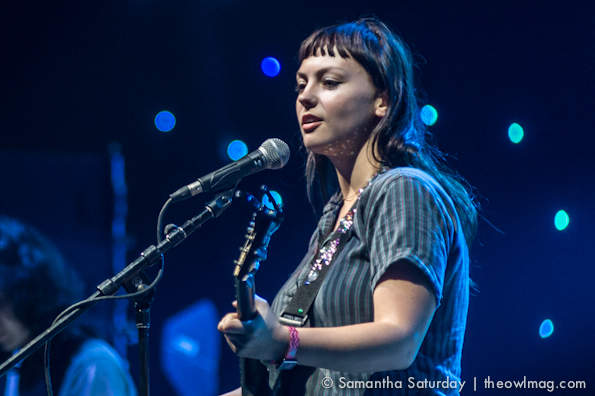 From the redwoods of Big Sur, to the concrete bowels of the LA Sports Arena, Angel Olsen has covered some California ground this summer. Tooling her set accordingly, she stuck with the punchy mid-tempo numbers, rocking hard on “High and Wild” and finished up with a jarring take on “Forgiven/Forgotten”. What would be drowsy confessions in the hands of similar songwriters were turned into blunt weapons here. The starry night sky background lent the perfect mood setter, and the scoreboard ring repurposed to hold many disco balls was a nice touch. – WJ 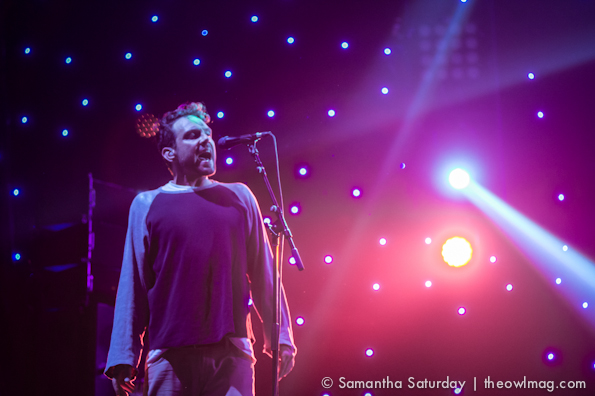 On the heels of a Friday night local warm up show at the El Rey Theatre, Slint worked over the LA Sports Arena filled packed with Spiderland faithful. If one needs a dictionary definition of ‘cult album’, the much-beloved 1991 LP would be a heavy contender. For many in the audience, it was a dream unexpectedly realized to hear this material live and the opening chimes of “Breadcrumb Trail” set things off. Immediate wins were a thrillingly clear mix, able to withstand the intense dynamic shifts of the band, and the vocals were more pronounced. “Washer” was a standout, and it seemed like the whole audience craned forward for the set piece treatment of the whispering dread fest of “Don Aman”. – WJ 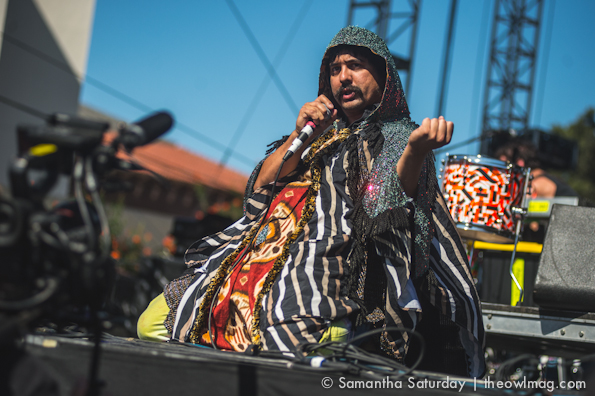 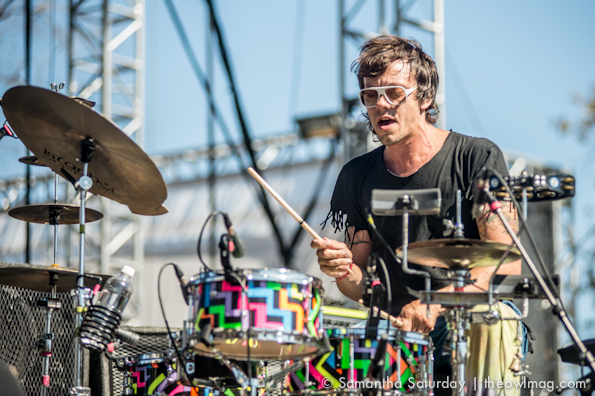 Early in the day at the Lawn stage, Philadelphia’s Man Man drew in a decent crowd despite the still snaking entrance line that had soured many even before their entry to the grounds. For those who did make it in on time, the four piece supplied fittingly sunny and weird vibes. – Samantha Saturday 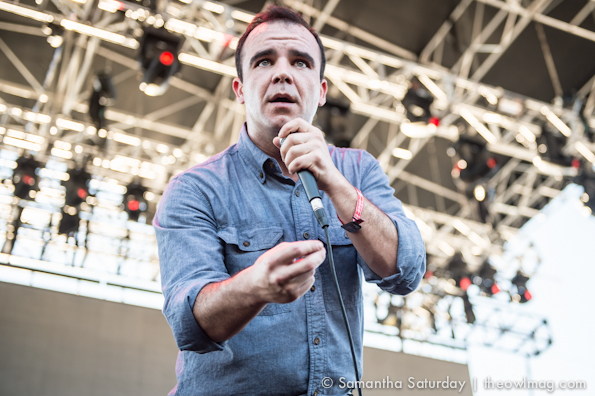 Riding high on the tail of two packed dates at the Fonda Theatre, two years after their last FYF Fest appearance, Future Islands left everything they had on the stage. If it’s even possible, Sam Herring pulled out more emotion than ever before, slapping the ground several times in a fit of passion and intensely staring out into the abyss of the crowd. – SS 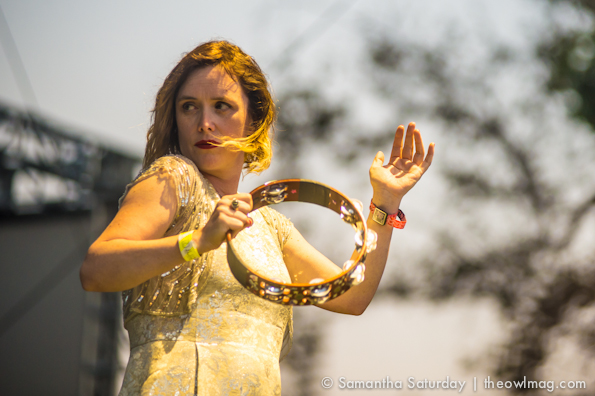 One thing FYF has been hitting on the head in recent years is bringing alternative cult acts back into the music scene’s eye. The prime example at this year’s fest was shoegaze act Slowdive. With their performance at sunset, they more than made up for the deafening silence of the sound system cutting out during My Bloody Valentine at last year’s FYF. – SS 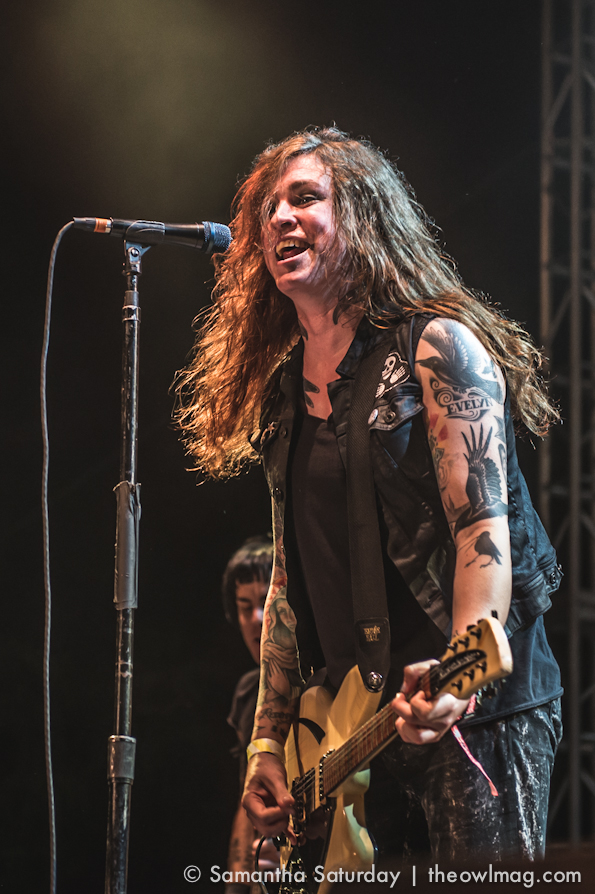 Photographers were fairly warned before entering the pit before Against Me!: this was going to be a very active crowd. Although the new festival grounds were covered in grass, the passionate crowd was still able to kick up a dust cloud akin to what FYF Fest returners not so fondly remember from the State Historic Park. – SS 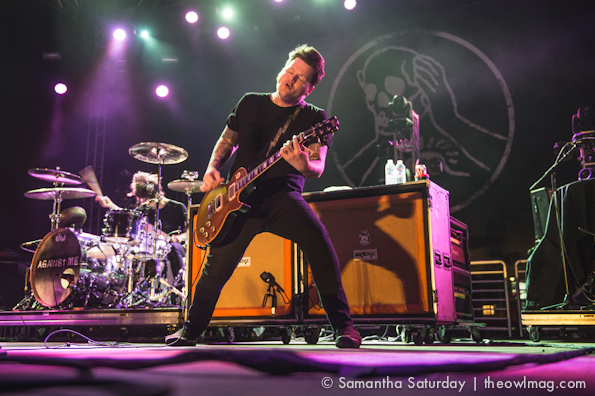 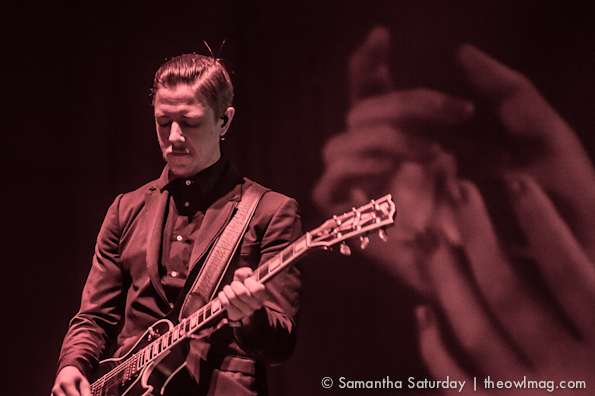 One of the major changes made to the grounds on Sunday (splitting the Main Stage crowd down the middle with barricades) was most likely due to the madness that occurred just prior to Interpol’s set. A steady stream of nearly-crushed fans was ushered out of the barricades as the entire viewing area for the stage filled up. But Interpol made it worth it, bringing an unexpected force to be reckoned with. – SS 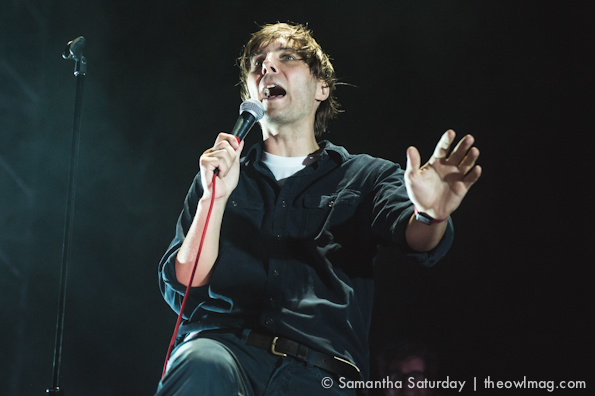 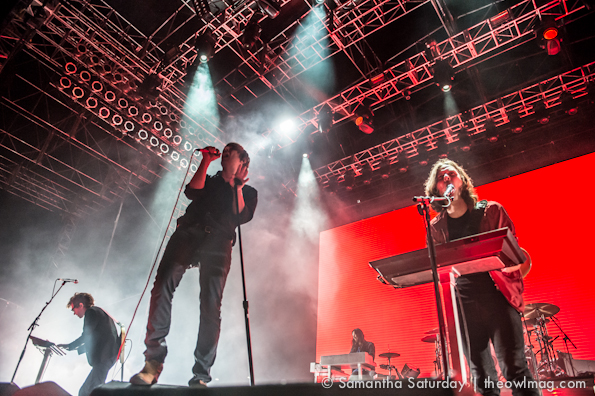 Closing their Bankrupt! tour, Phoenix prove to still be a pop powerhouse. Although the crowd lightened (undoubtedly many headed across the grounds for Grimes) for the French imports, that just meant plenty more room for dancing. – SS 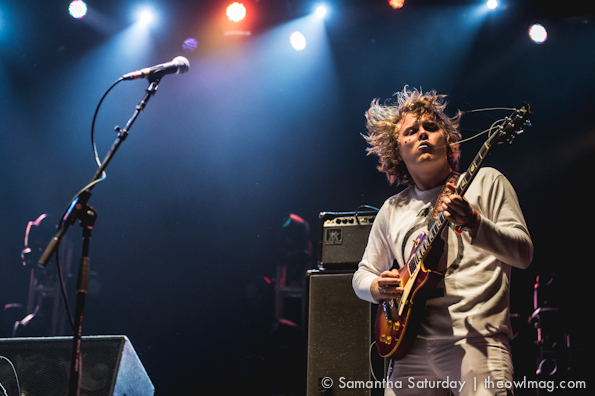 Of course, we had to make one more stop on the way out for Ty Segall and his new band persona, Manipulator. With bud Mikal Cronin by his side, Segall flipped his performance 180 degrees from last year’s stark acoustic performance. Big, crunchy guitars and metallic everything capped off our night nicely. – SS 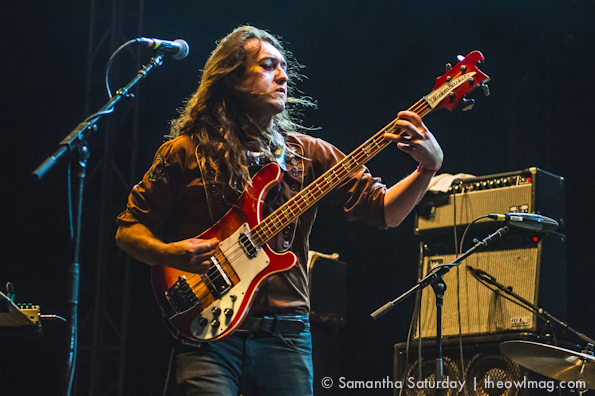 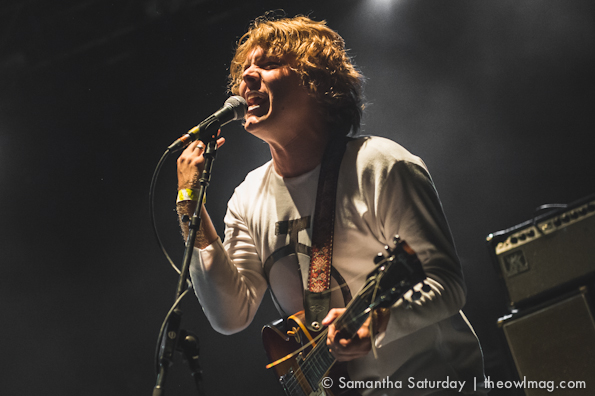 Were you one of the unfortunate ones stuck in line during Man Man or forced to choose between a set at the Lawn or Main Stage? Never fear, check out our full photo gallery of Saturday’s acts HERE!