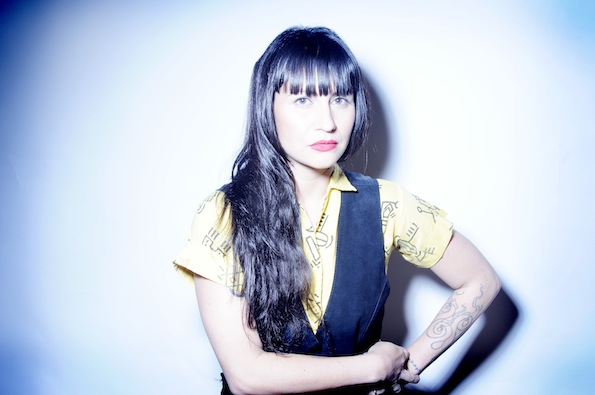 On a weekend dominated by Coachella, Frankie Rose made her way through San Francisco and lit up the Brick and Mortal Music Hall. At the date of the show, she’d been on tour for two and a half weeks (her longest tour to date) and was clearly having fun.

A founding member of Vivian Girls, the Dum Dum Girls, and the Crystal Stilts, Rose has the stage presence and polish of a vet. She took the stage at 11:30pm after a great set from DIVE, and played an almost too short, but very sweet set.

While Rose’s contemporaries like the Vivian Girls and Best Coast are trying to expand their sound from low fi-garage, Rose’s sound on her latest album Interstellar is fully realized and mature, and as the title suggests, spacey. The album manages to sound intimate and expansive in different parts, and is one of the best albums of the year thus far.

Rose seemed happy to be back in San Francisco (she lived in the City for a few years before re-locating to the mecca of lo-fi that is Brooklyn, NY), and was flanked by friends from the local SF music scene. Rose’s band was tight and it was surprising how well they were able to replicate the intricacies of the studio album live. “Know Me” had the audience dancing to its eighties style guitar riffs as Rose did the hand claps. “Gospel/Grace” showcased Rose’s voice and sounded awesome. “Night Swim” was the best track of the night, and featured Rose and her mates ripping through the fast-paced track. It’s not hard to imagine Rose becoming wildly popular and playing Coachella as early as next year as one of the more anticipated acts.