FILTER Magazine‘s second annual Culture Collide Festival took over Echo Park last weekend. The four-day festival, including TOYOTA ANTICS Block Party, was held at several venues within a two-block radius. Venues included The Owl Mag favorite the Echoplex, a banquet hall and bar at the French restaurant Taix, and even a Methodist Church. Here are our highlights from Culture Collide 2011: 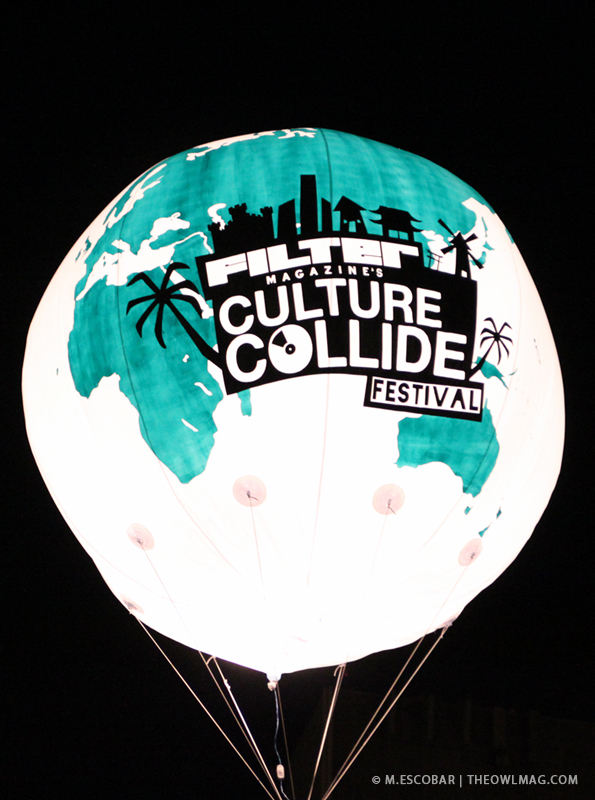 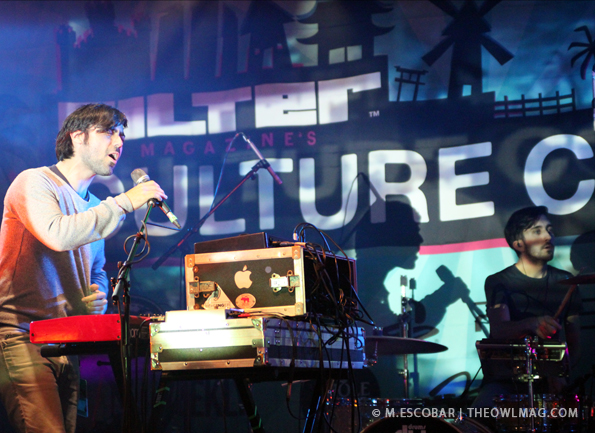 Hands
Hands: (USA)
Fellow citizens Hands entertained the early crowds that filled the Echoplex for night two of the Fest. The band debuted their latest single “Warm Night Home” which was well-received from the leather-clad audience. Hands quickened the pace and got people swaying to the beat with “Night Blind.” Overall, Hands managed to entertain and distract Fest goers from the PS3-sponsored game demos throughout the length of their set. 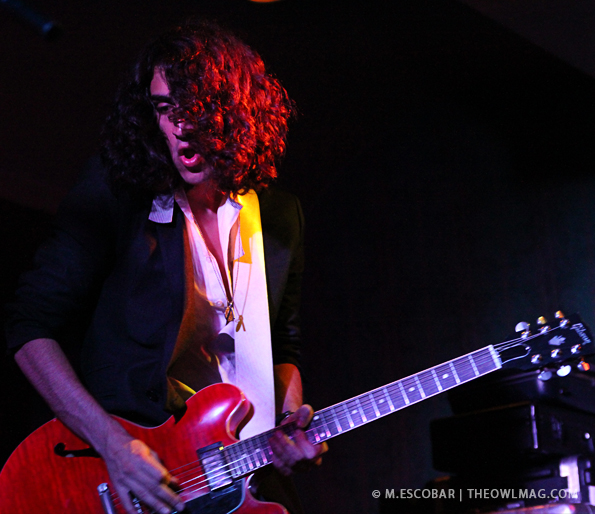 Hypernova
Hypernova: (Iran)
From the Echoplex to a side bar at Taix, we stumbled upon Iranian band Hypernova. Sounding like the Middle East’s answer to Interpol, these monochromatically-dressed men managed to pack the house with old and young alike. From the lead singer’s dramatic start to the first song to the bassist’s shuffling while playing, we were pleasantly surprised at how awesome this band was. 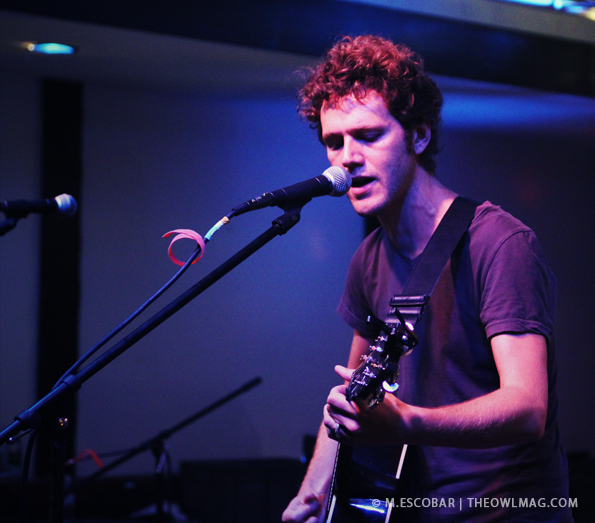 Ian Ball of Gomez
Ian Ball of Gomez: (UK)
Heading across the pond, we checked out Ian Ball of Gomez performing an acoustic set. Looking like he stepped out of the American Apparel billboard on Sunset, Ball with his faithful guitar performed his heartfelt lyrics to a rather restless group. At times, I didn’t know what was louder: the conversations in the audience or the artist. Despite trying to liven up his set with an assist from his iPad, Ball never fully held the attention of the crowd. Perhaps he didn’t realize this as he played almost entirely with his eyes closed. 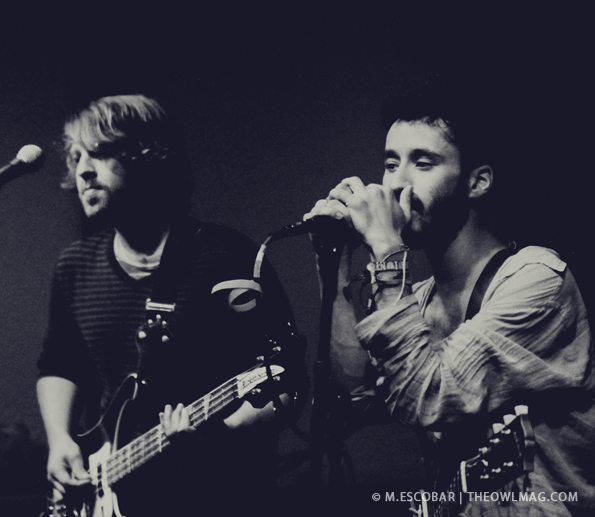 The Postelles
The Postelles: (USA)
Where Ian Ball failed to hold the attention of the crowd, The Postelles succeeded tenfold. This NYC-based band had the predominantly female crowd dancing and singing along from the moment they took to their instruments. With every passing song, the audience inched closer and closer to the stage as if drawn into the natural magnetic charisma coming from The Postelles. These boys are rock ‘n roll at its finest. 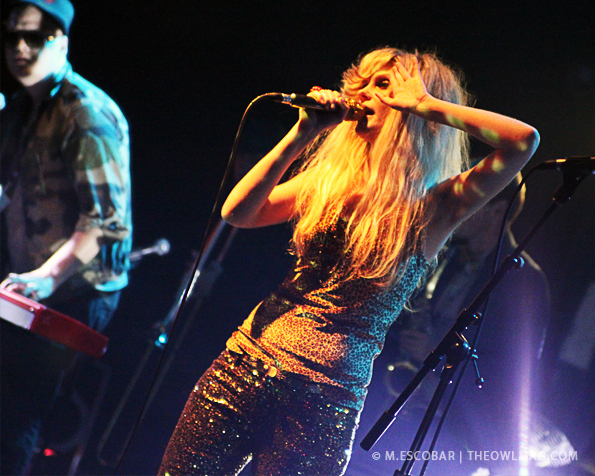 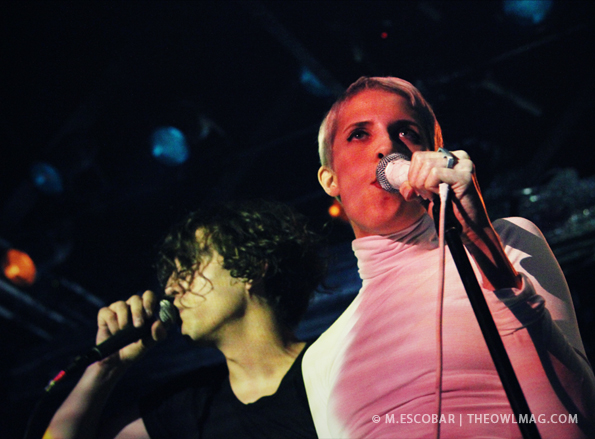 YACHT
YACHT: (USA)
Technical difficulties, a late start time, and a fight in the crowd wasn’t enough to deter the fans of YACHT from anticipating their performance. LA transplants by way of Portland, Jona Bechtolt and his partner-in-electro-dance-goodness Claire L. Evans started the set off strong and never showed signs of slowing. This dynamic duo had the crowd gyrating with their mad electro-beats from start to finish. 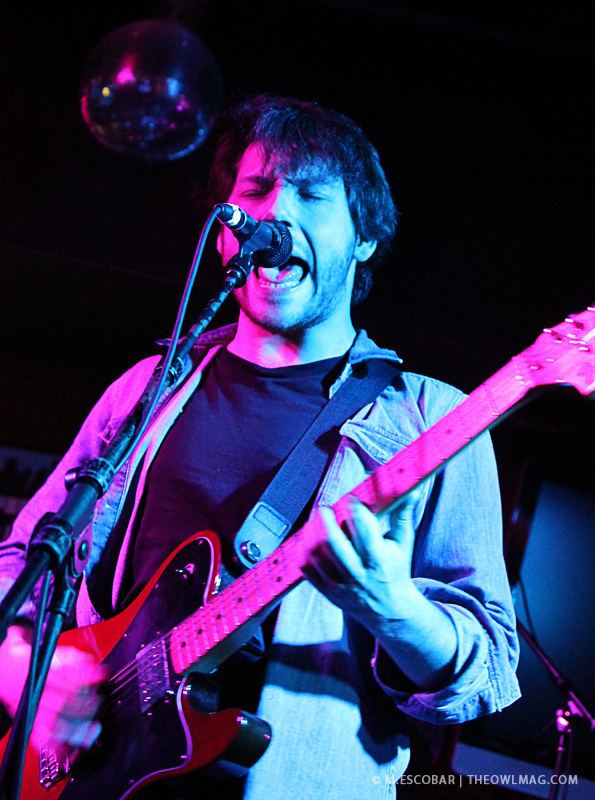 Death Letters
Death Letters: (The Netherlands)
I don’t know about you but if you prefer your rock music to be loud and undecipherable, Death Letters may be your forte. We couldn’t even tell what language lead singer Duende Ariza Lora was singing in (we later found out it was English). These teens from the Netherlands did not impress us with their performance, but there’s always room for improvement and like a fine wine, we can see them getting better with age. 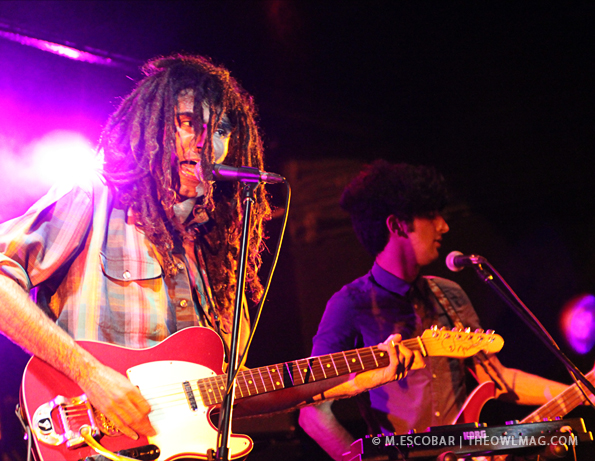 The Yellow Dogs
The Yellow Dogs: (Iran)
Tecate-loving Iranian band The Yellow Dogs had the audience bobbing their heads and shaking their hips with their guitar-fueled borderline indie dance rock. That’s where the niceties end. The beat was great and the crowd responded nicely, but we could not get into the music once the singer opened his mouth. He sounded like he was attempting to be a cross between the lead singers of The Clash and System of a Down. Shame. We wanted to like them. 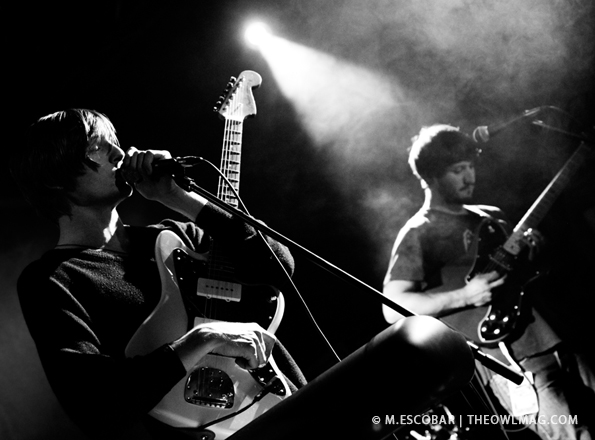 Young Liars
Young Liars: (Canada)
Young Liars pulled off something really awesome on Saturday – they played a great set with a last-minute replacement drummer that had never played with them. Apparently their drummer had border issues and the band scrambled to find someone to fill in. Young Liars is definitely a band to keep your eye on – their indie-pop hooks will grab you. 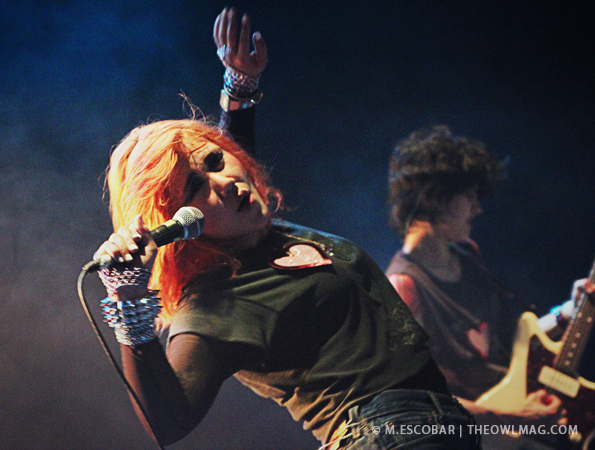 CSS
CSS: (Brazil)
CSS knows how to party. The Echoplex was packed for the last show of the night and the band didn’t disappoint. Singer Lovefoxxx came on stage like a bat out of glitter, sequined hell and entertained the crowd with her smoky voice and onstage antics and banter. She was flirty, funny, and sometimes spastic. They mixed old and new songs into their set with the obvious favorites being old booty-shakers like “Lets Make Love and Listen to Death From Above” and “Music Is My Hot Sex.” 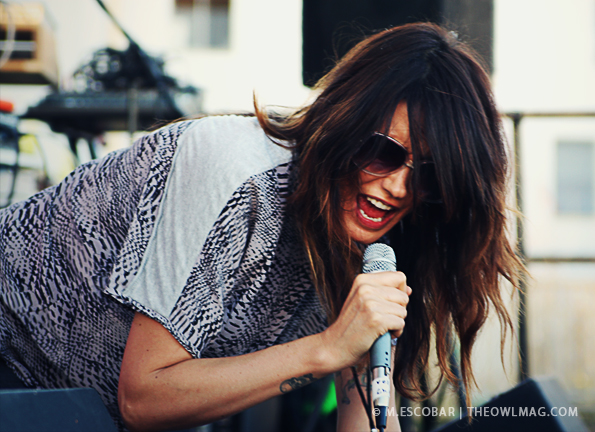 Rainbow Arabia
Rainbow Arabia: (USA)
We started out the last day of the fest checking out Los Angeles-based duo Rainbow Arabia. Lead singer Tiffany Preston held the attention of the crowd with her airy vocals sounding not unlike Lykke Li. The band’s synth-heavy vibe left us wanting more after their rather short set. 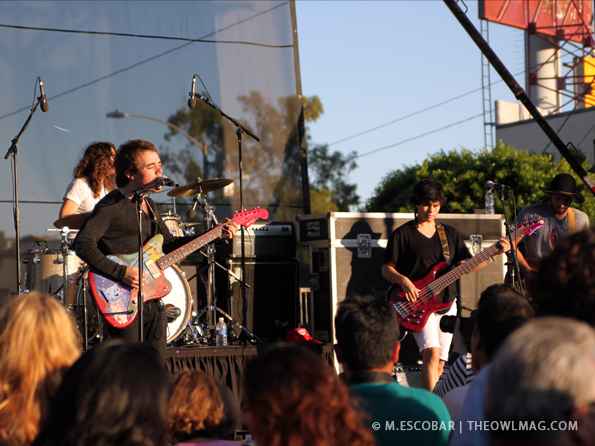 Avi Buffalo
Avi Buffalo: (USA)
After working through some minor tech difficulties, Avi Buffalo took to the main stage as the sun began to set. Guitarist Avi Zahner-Isenberg displayed his mastery of the instrument throughout the set, much to the applause of the adoring audience. The band slowed down their set midway with “Jessica,” a song greeted with much fanfare when introduced. The eclectic crowd danced and enjoyed the Long Beach native’s set from its guitar solos to the surprising rap interlude. 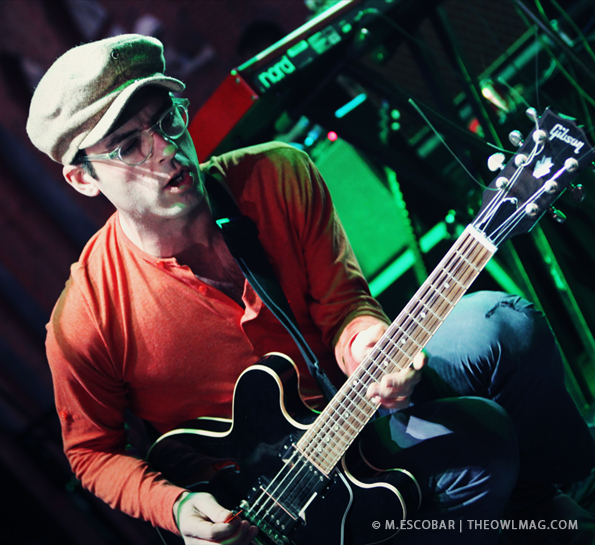 Clap Your Hands Say Yeah
Clap Your Hands Say Yeah: (USA)
Not even a hurricane could have a stopped these boys from Brooklyn from rocking out into the night. Clap Your Hands Say Yeah was clearly a crowd favorite and had all of Echo Park dancing to each song performed. The song “Manic” off their latest album had everyone clapping and singing along to the beat. Despite having some feedback throughout the set, CYHSY didn’t let this minor technical detail deter them for giving an otherwise amazing performance. 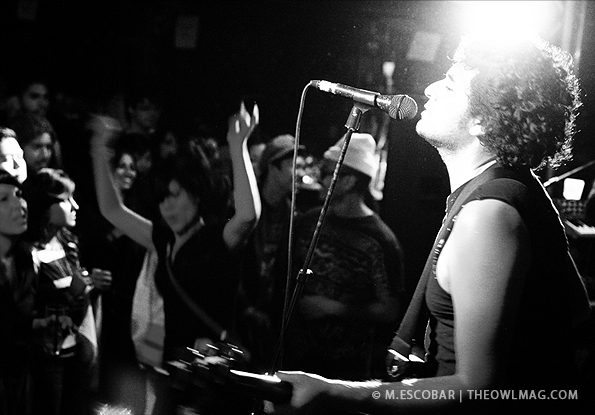 Dapuntobeat
Dapuntobeat: (Mexico)
Representing our neighbors to the south, Dapuntobeat made their LA debut at Culture Collide. Their Latin-fueled electro-tinged dance rock had the Twonky bar at Taix dancing up a storm. We swear we could almost feel the sweat coming from the walls from all the excitement. We certainly hope their first stop in LA isn’t their last. 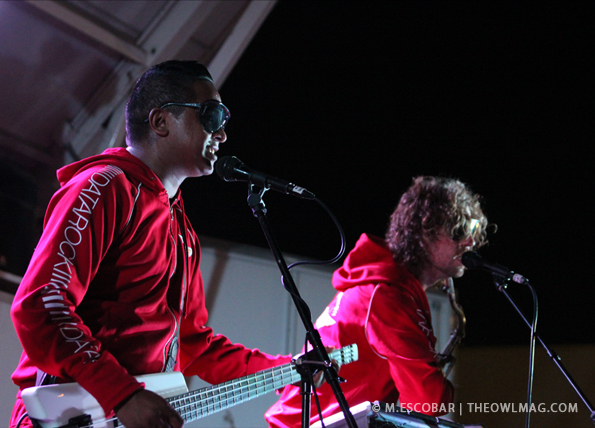 Datarock
Datarock: (Norway)
Norweigian band Datarock wins as the most energetic band of the day. From start to finish, they commanded an all-out dance fest. Donned in matching red tracksuits, these guys showed no signs of slowing. Kjetil Møster gave a whole new meaning to sexy sax man, jumping from behind his keyboards to rock the sax and excite the crowd. For one of their final songs, Datarock brought on stage Gerald Casale of Devo to perform with them. Already armed with a legion of fans, we see Datarock easily expanding their fanbase after this show. 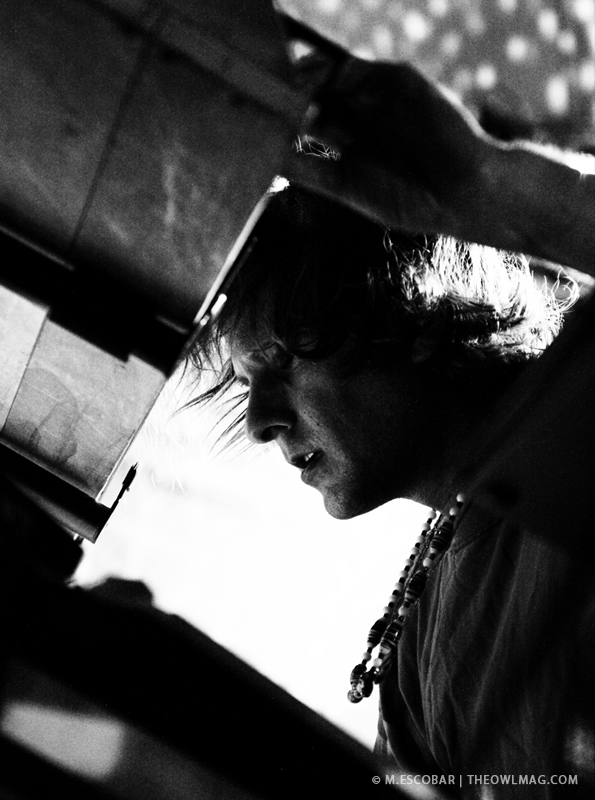 Gang Gang Dance
Gang Gang Dance: (USA)
One of the last acts we saw for the night, Gang Gang Dance sadly did not end our festival run with a bang. Their dramatic drawn-out drumbeat intro had the already restless crowd antsy enough for someone to shout, “Hurry up already!” Hurry up indeed. We just could not get behind the wailings of Lizzi Bougatsos. Nonetheless, this experimental rock/world beat group seemed to have hypnotized the crowd with their tribal beats.