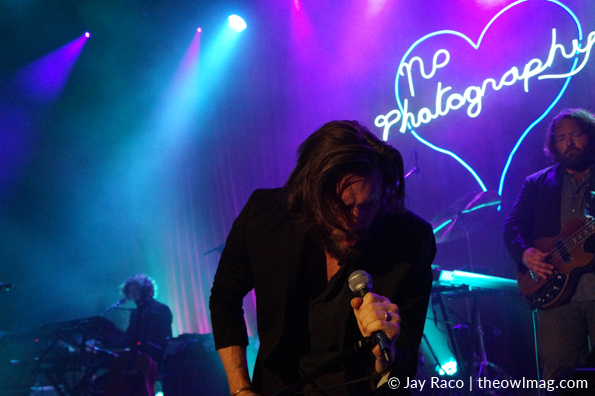 Josh Tillman has come so far since his days with our beloved Fleet Foxes. In a band that was reverent and serious, he was the cut-up that would add levity and witty banter from his drum kit. It seemed like a perfect balance. Their harmonies were epic and beautiful. We miss them, but appreciate what he’s become – his irreverent reaction to his past.

After a psychedelic experience and a move to the famed LA area of Laurel Canyon, the character Father John Misty was born. A sarcastic, romantic Lothario, equal parts swagger and self contempt. No one would accuse Fleet Foxes of being funny, or even fun, but FJM is both of those, and his set at The Fillmore in San Francisco was a perfect showcase.

Opening with the title track from his excellent sophomore effort I Love You, Honeybear, Tillman scaled the drum set and maniacally roamed the stage, grasping his chest and reaching out and touching the audience. Making us feel his angst as he sang about the end of the world, conceiving a Damian like spawn with his lover, but that ultimately their relationship will get them through, and everything will be “fine”.

Tillman’s banter was so good. Fresh off a Coachella performance, and heading back to the desert for weekend two, he seemed happy to be playing in front of a proper rock crowd and being at the legendary venue. “Coachella is like if a bunch of rich white girls threw a hippie themed sweet 16 party, and their dads decided to hang around for the party.” Coachella; instantly so uncool.

The crowd was fantastic and hit all of their beats. We sang along and were rowdy when he was, and quiet when he wanted us to be.

Father John Misty the character is debaucherous and engaging, but what makes Tillman dynamic is when he breaks character (intentionally or otherwise) and that serious artist from his past is revealed again. The guy has chops as a musician, and vocalist. The character would be gimmicky without the substance. He’s a helluva song writer and the there are so many brilliantly subtle moments. There’s a passing melody on “This is Sally Hatchet” from his first record and live it absolutely killed everyone “Go On and Laugh it up without me. I’ve got Smoke in my lungs, and a past life in the trunk”. We might have come to see the character, but we saw the man instead.