“Disruptive” is a word we usually hear applied to technology or children in kindergarten, not to music. Listening to Ensemble Mik Nawooj play their mashup of classical music and hip hop,

disruptive fits it just fine. With a chamber orchestra (piano, flute, clarinet, violin, cello, double bass), an opera singer, and drums and three MCs, Ensemble Mik Nawooj fuses modern popular music with classical tradition with a result that transcends all its roots. While there have been hip-hop recordings that use sampled classical music as a base, this show brought the more unusual live dynamics to Brick & Mortar”s intimate setting. 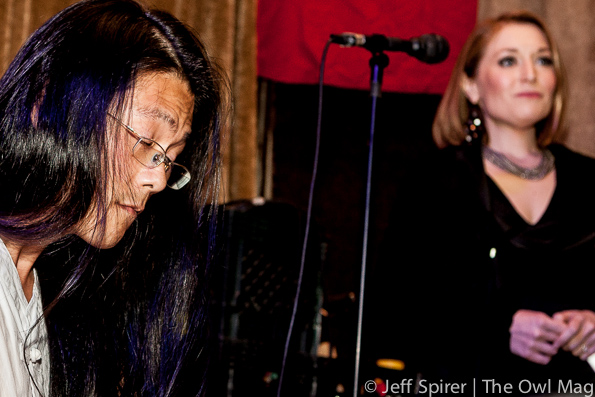 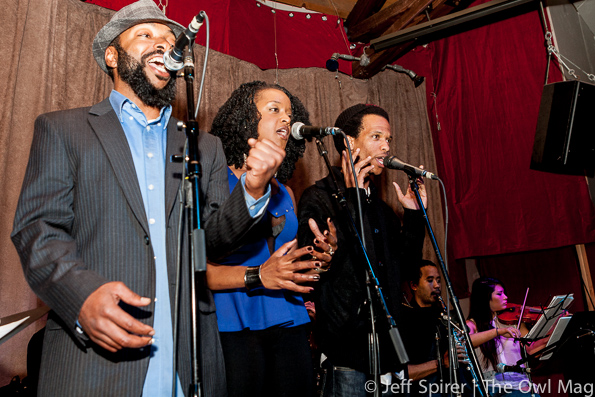 The musical uniqueness allows director/composer/pianist JooWan Kim to explore topics that are difficult within the confines of traditional genres. The Ensemble performed pieces from its chamber hip hop opera “Death, Love & Life”, which stemmed from the death of one of Kim”s friends. The lyrics were a bit hard to understand at times, due to somewhat bright acoustics, but Kim spoke poignantly about the events and emotions that motivated the music before performing “Without Goodbyes.” Speaking with Kim after the show, he told us that he wanted to give people a positive message of hope, and not despair. 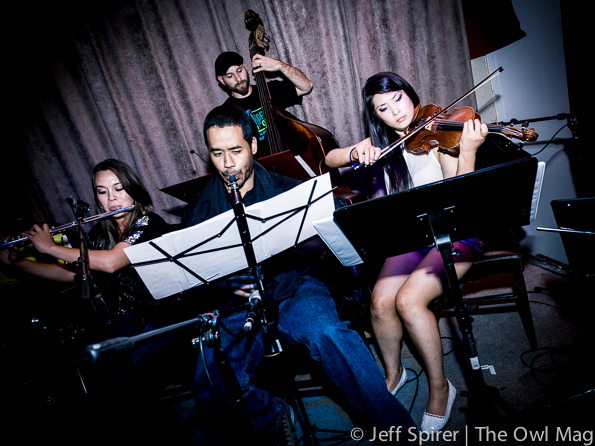 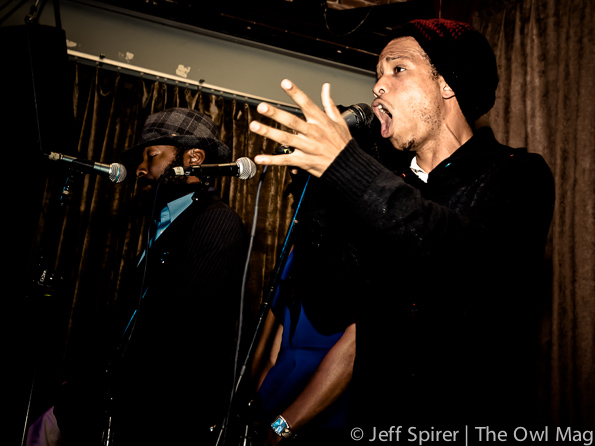 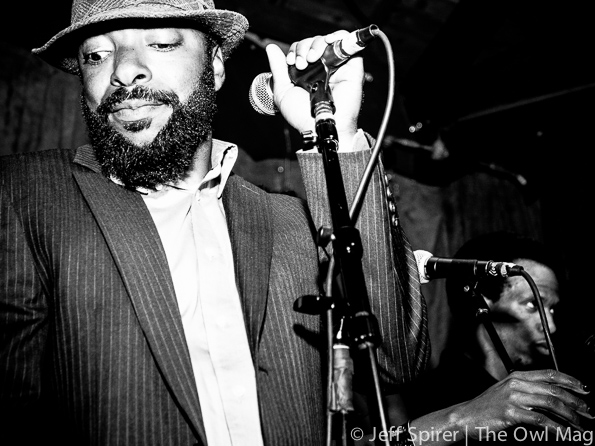 And that he did. The crowd pressed up to the stage and danced, clearly receiving the vibe that Kim wanted to put out. The music alternated primarily classical interludes without voice or drums, often built around Kim”s lyrical piano lines, and beat-driven vocal segments that made it easy to forget the unusual instrumentation, until soprano Lauren Woody delivered soaring wordless vocal accompaniment that had the crowd cheering. The MCs – Do D.A.T., Sandman, and RyanNicole – all delivered exceptional performances with emotion showing in both voice and body. And despite the performers starting to take down the equipment, they were pushed by the crowd into an unplanned encore with “Morning Light.” 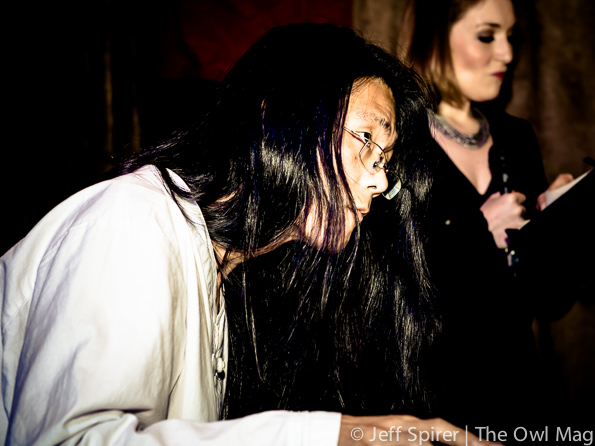 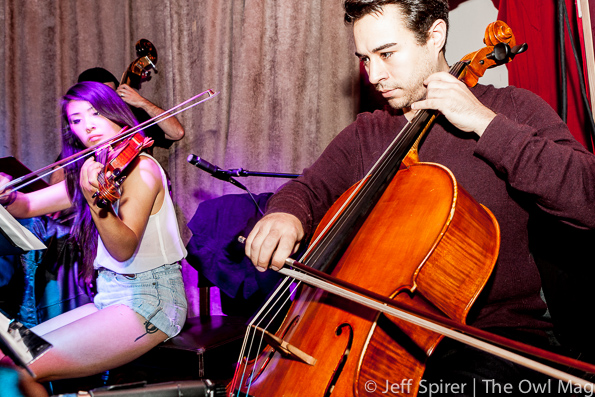 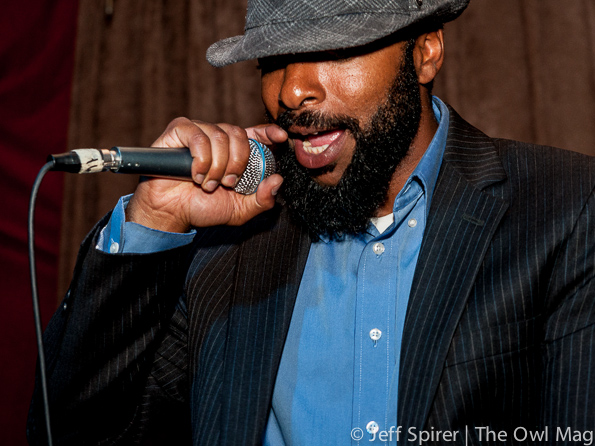 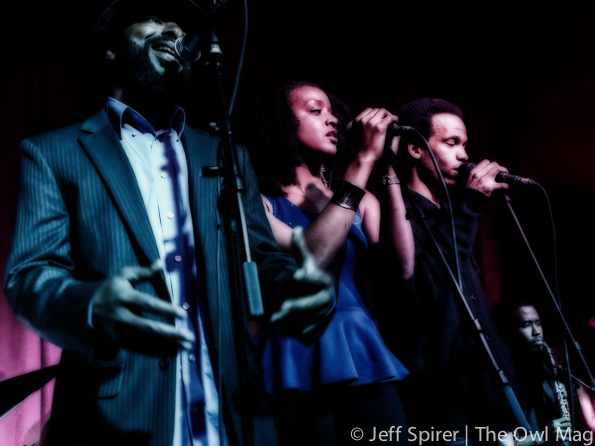 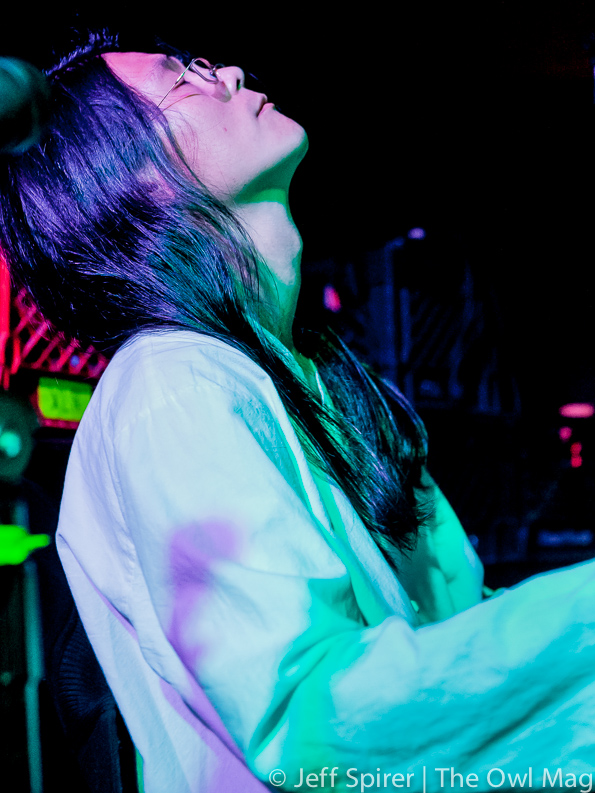 The opening acts were not just strong, they were in sync with Ensemble Mik Nawooj”s performance. Cellojoe, an almost one-man act opened with his cello playing and beatboxing, set to pre-recorded rhythms. For one song, “Bike Girl,” he brought out Tony Tone who danced and sang about bicycling and booty. Next up was Aima The Dreamer who brought her strong messages about unity to the mic, with backing from DJ Steelo.