Now we all know that when you think of Connecticut you think Rock ‘n’ Roll. Living up to thier honorable title, this past weekend Hartford exploded with talent for the third annual B.O.M.B. Fest. The festival, which stands for Bring Our Music Back, has a noble cause not only to give exposure local acts, but also donate a large percentage of its proceeds to Hole In The Wall Camps, Connecticut Children’s Medical Center and YPI, a children’s camp for artistic development.

While we didn’t catch any Stepford Wives, there were some great artists that undoubtedly lent their spark to a memorable and explosive weekend. 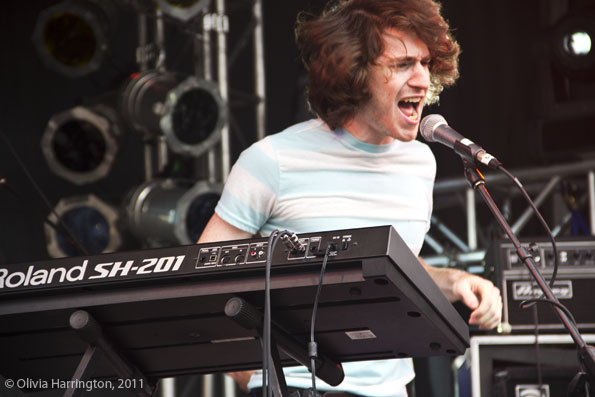 Both bands had to face early morning crowds, meaning there weren’t any. Still, both managed to put on an entertaining show, whether it be Walk the Moon‘s Nicholas Petrrica and Kevin Ray’s infectious smiles while they played or the endearing, if not extremely self-deprecating banter of Chalk Talk as they recounted their prior night’s escapades or heckled security guards to come see their show. 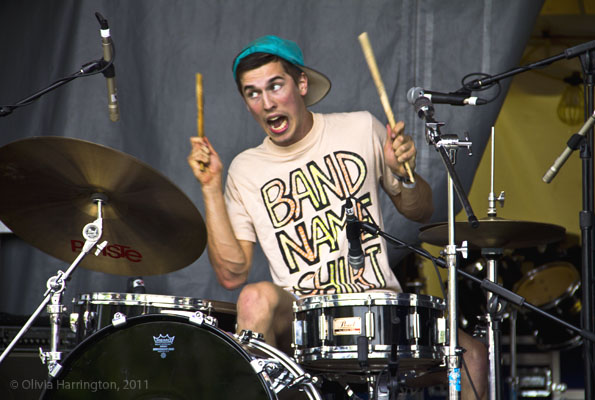 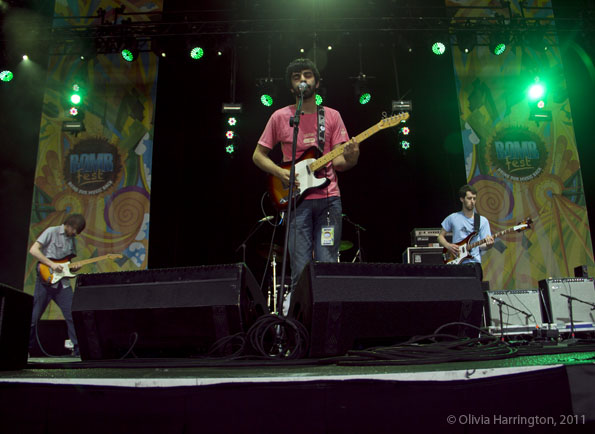 While unfortunately we can’t show you the receipts on this one, you’ll just have to trust that seeing vocalist Omeed Goodarzi strip down to his skivvies was quite the experience. Midi and the Modern Dance is a local Connecticut band who perform a sort of twisted pop, containing lush vocals thrust together with hard and fast spurts of heavy guitars (of which they have three on stage), heavy drums and even an accordion. If the strip show didn’t prove it, the band certainly do know to how to have fun, as seen by Goodarzi’s valiant attempts at crowd surfing during Titus Andronicus’s set. 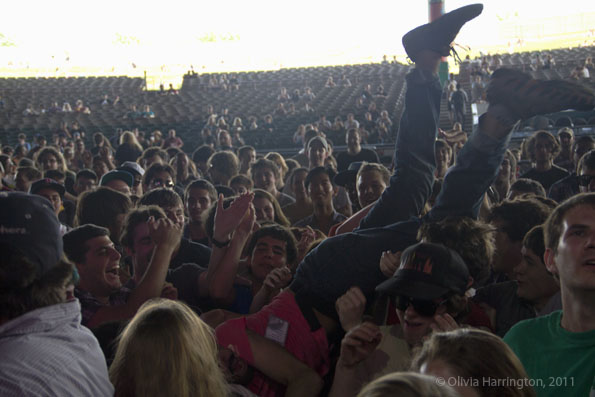 On the heels (or perhaps upturned soles) of the last photo…

“Skinny white guy falls on stage. There’s your title , I’ll give that to you.” Such a declaration was made by Free Energy‘s lead singer Paul Spranger moments after his alleged fall, which may have been the most graceful on-stage stumble in history. 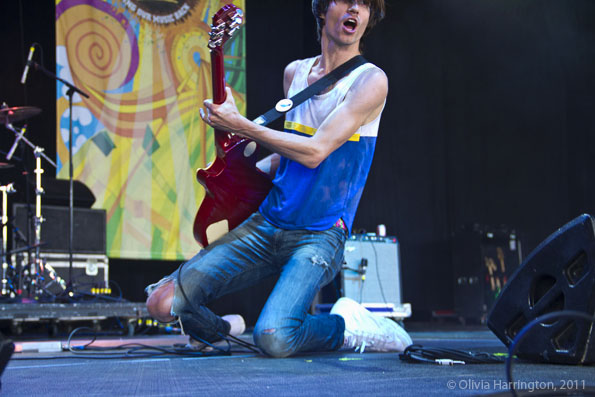 Aside from his gravity faux-pas, Spranger also recovered nicely from another sort of stumble: good friend and current guitar stand-in, Patrick Stickles of Titus Andronicus, blew out the band’s tire on the way to the festival, leaving Spranger to clumsily pick strings along with his usual vocal duties for this unabashed glam-pop band. 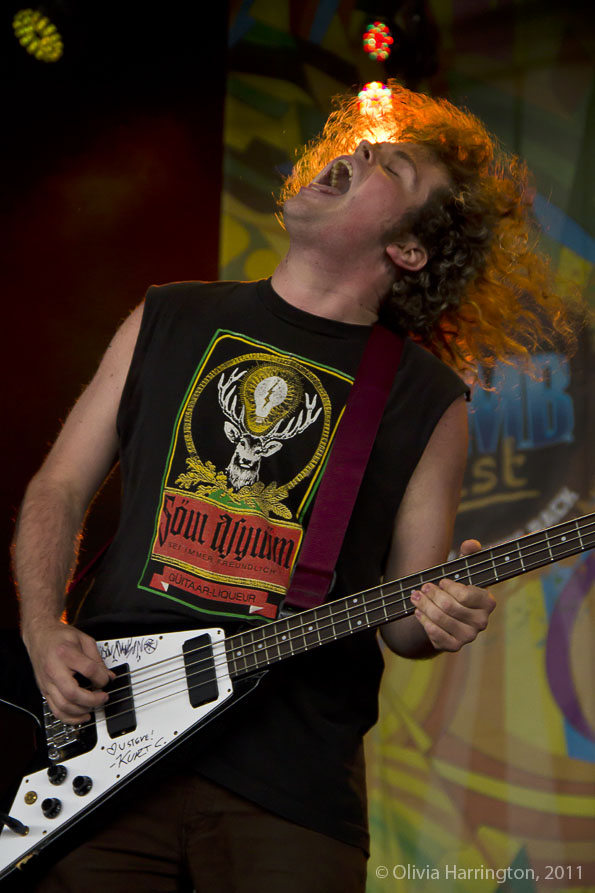 Stephen Pope has already cut his teeth in some pretty illustrious ventures, namely as the bassist for the late Jay Reatard. While many have come to see Wavves as Nathan William’s brainchild, Pope’s on stage performance, energy and aptitude for bending the rules of physics with his face made him the on stage stand-out. 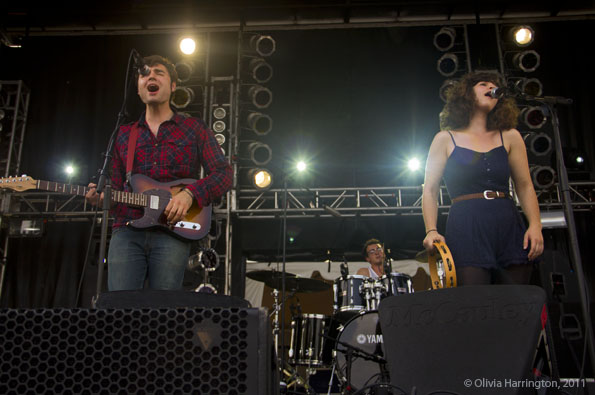 A festival can be a breeding ground for descent into curmudgeon-ism. In special cases, what enters through the gates as a happy hippy can walk out a full on nihilist. For while festivals can be fun, they can also be expensive, crowded and purveyors of new smells never before experienced. They also can bring out the car salemens of every enterprise. Thus, wading through the worthy promotions thrown at you can be a feat. Thankfully, when a plaid-clothed boy handed out red fliers for a mysterious band, Swear and Shake, the risk to actual follow through on his pitch payed off. The Folk duo, backed by a full band, Swear and Shake, provided a nice soulful reprieve and put some of those Nieztchian thoughts to rest.

Best “WTF… Maybe I like this?” audience reaction: the response to the band HEALTH 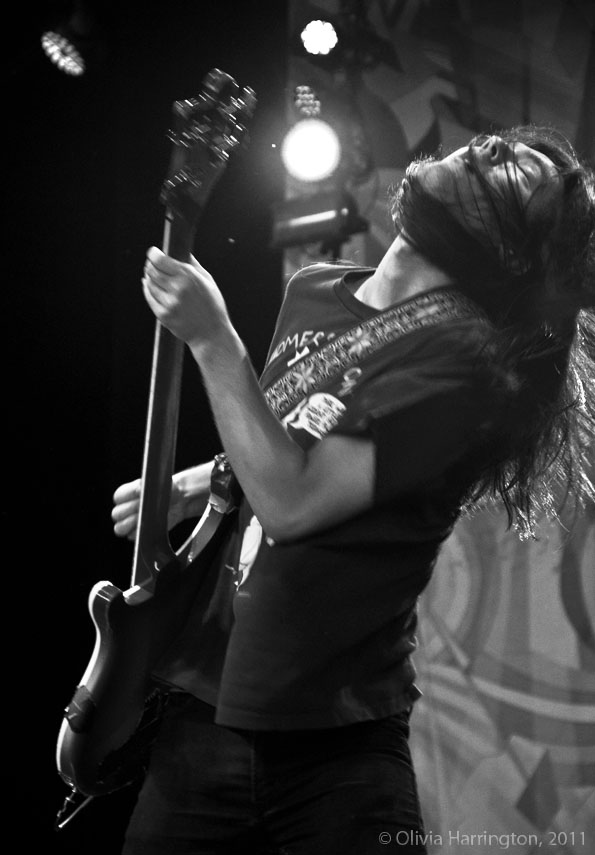 The electronic, noise band HEALTH gave their full share of yelps and screams when performing on the Main Pavilion stage. When the long-haired, John Famiglietti took to the floor in his Homer Simpson t-shirt, those unfamiliar with the band were likely unprepared for the intense wails and wild hair whips that he would extol. Bandmates Jake Duzik, Jupiter Keyes and BJ Miller gave a solid noise rock introduction that seemed to win over many of those who first gazed on in wide-eyed shock. 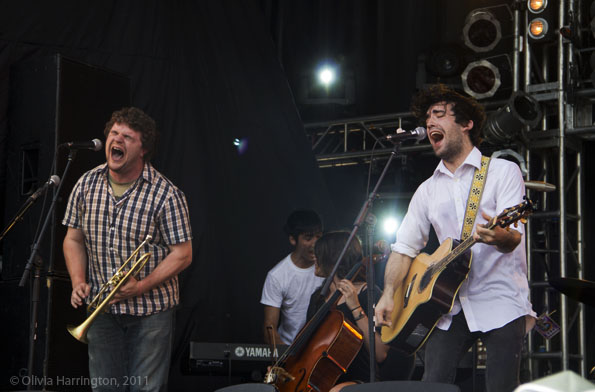 This 8-piece ensemble of River City Extension, led by Joseph Michelini, is a fusion of love-lorn, anguish, angst and lust as told through their self-described “orchestral indie rock.” It’s an experience to watch, and if every great song has a backstory, Michelini has some great ones as he admitted to during an intimate acoustic show later that day. Apparently he had once had a crush on one of the girls now in the band and convinced her to sing vocals on a song so that he could hear her say all the things he wanted her to say to him. “Pretty fucked up, isn’t it?” Regardless of whatever romantic turmoils it seems to only have made River City Extension a strong, unforgettable, and need-to-get now kind of band.

When bassist Bobb Bruno broke his string, Best Coast‘s Bethany Consentino, delighted the audience in monotone retellings of tales of seeing Foo-Fighters with her mom, that fine-looking guy in Waaves (“Patrick!”), the ever popular Snacks the cat and offered laughter and dead-pan responses to many of the adoring hecklers in the audience. 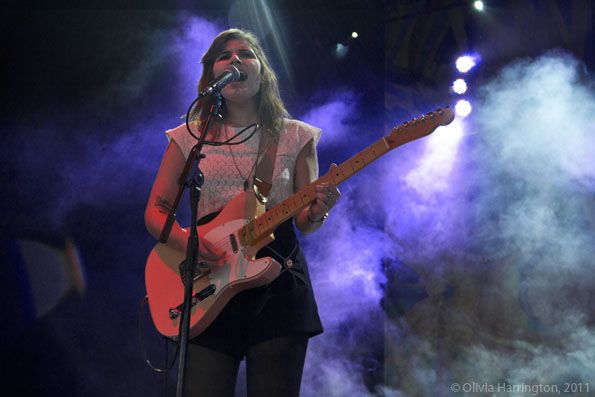 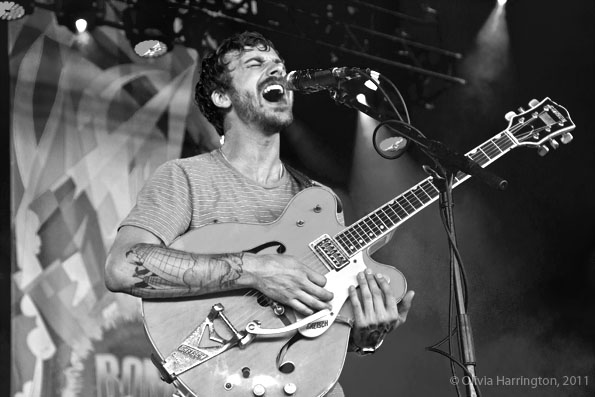 “Save me, I can’t be saved, I won’t.” From the first words ‘People Say’ off the album The Satanic Satanist, it was apparent it was going to be a show so good it was sinful.

Best Use of the Stage: Neon Trees 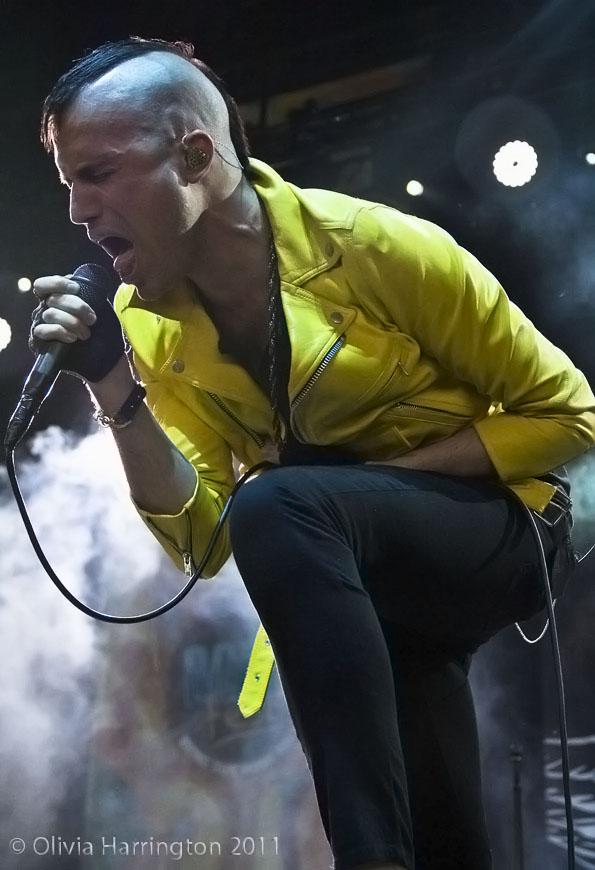 Neon Tree‘s lead singer Tyler Glenn danced around, stripped off his jacket, stood on speakers, did some sort of moon walk, grabbed his crouch, danced on the drum set, did ballet on the keyboard… and that was only within the first 5 minutes.

Most Real Moment: The New Pornographers 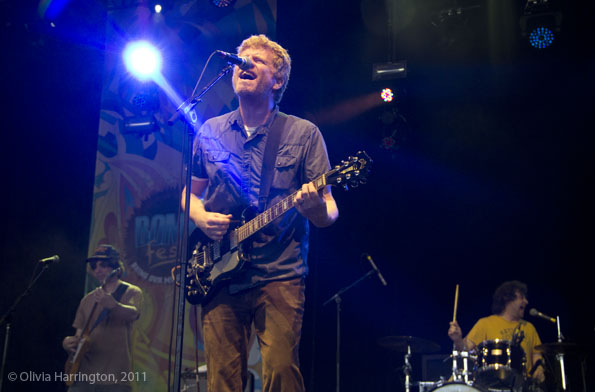 The veterans of indie pop hardly have anything left to prove, undoubtedly cementing their place in music pop-culture. However, when the quintet took the stage, some noticeable names where missing. There was no Dan Bejar and given the astute perception of one audience member, he yelled, “Where the fuck is Neko?” “Story of my life,” a composed A.C. Newman responded. Regardless as to whether anything was lying below the surface, The New Pornographers played their usual great set just exactly as they were.

“Hi, so I just flew in from Baltimore,” Dan Deacon declared. Yet, gathering from his colorful and consistenly amassing number of fans, it likely could have been completely accepted if he had told the crowd he flew in on a gold chariot from Olympus. So enamored with the electronic artist and performer, Deacon got the crowd to play in his own version of Simon Says where he got the entire crowd to do a call and response of a 5 minute monologue about emails directed at a lone person sitting on the stairs a few hundred yards away. The audience also dutifully responded when he told them to form a large circle and dance like dinosaurs, the mom from the film Big and other random creatures. The power of the Deacon. 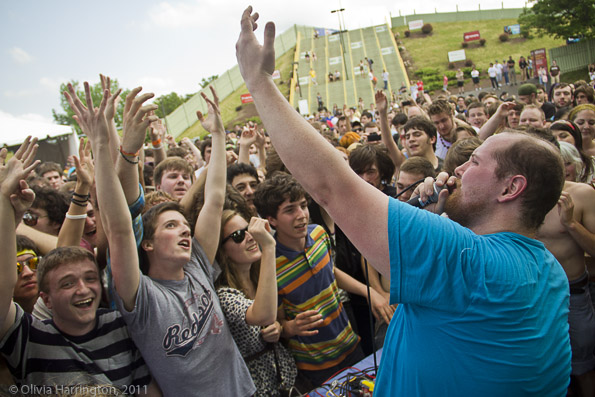 Best Performance (Unsurprising): Titus Andronicus, Against Me, Coheed and Cambria.

These three artists put on amazing live performances, but given that they are who they are, it was really no surprise. 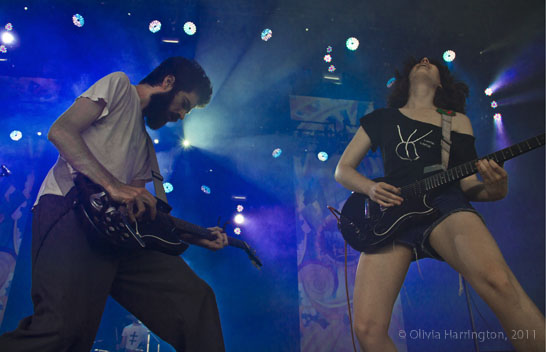 Titus Andronicus is always (always) a fantastic live show. While much accolade can be given to lead singer Patrick Stickles, Amy Klein is a force in her own right. Of course, it is the entire band as a whole that creates such a ‘perfect union’. 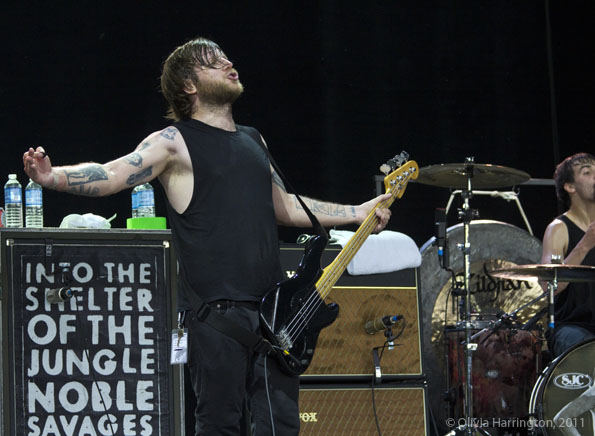 Dressed in all black, with lyrics printed boldly against their speakers Against Me! brought out punk with a purpose. Their razor sharp lyrics and fiery refrains were paired with fierce personal statements made by lead singer Tom Gabel that rallied behind pro-choice and questioned ideas of revolution. 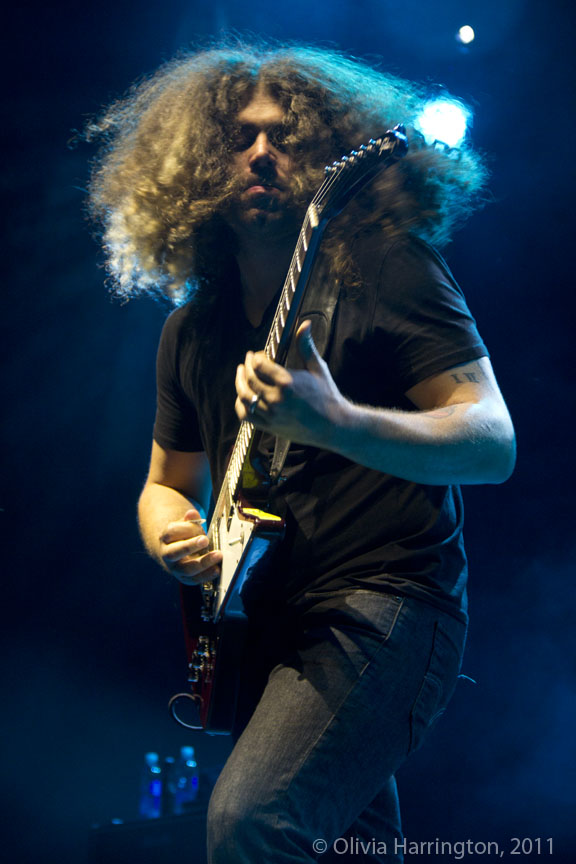 The sheer joy exuded from one lucky high-schooler could barely be contained when as the winner of a B.O.M.B. Fest contest he was able to meet and introduce the New York rockers. “Are you ready to see the best band in the entire world?!” he screamed. Coheed & Cambria certainly did their best to live up to their introduction, playing relentless punk, metal, rock fusion, while Claudio Sanchez sang through his mushroom top hair.

To say these bands put on great performances isn’t surprising in that they could do it. Both have a strong repetoire for bringing high energy, fun, and a bit of insanity to their shows. The surprise came moreso from the response of the audience and the ability of the bands to hold their own in their difficult time slots. If there was any question whether Connecticut was ready for their acts, it seems that their terrific shows answered that question.

Vaudeville on acid act Man Man had an audience so wildly enthralled, lead singer Honus Honus simply had to just do this: 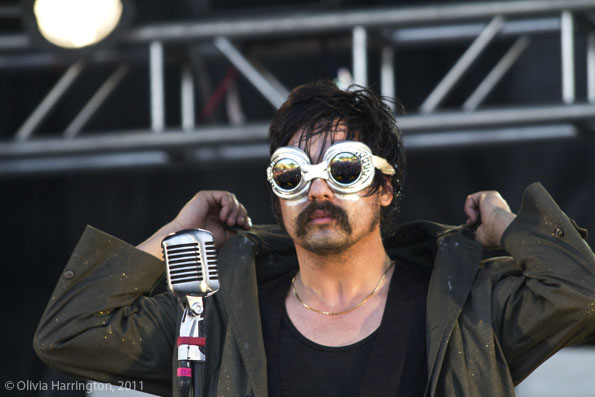 To inspire this reaction: 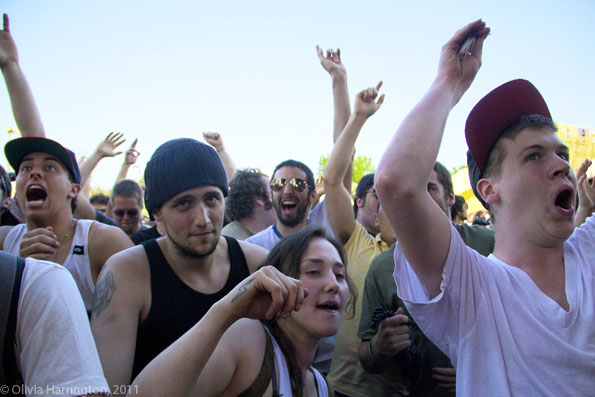 Turbo Fruits are leaders of the Tennessee music revolution currently taking over. Hailing from the Volunteer State, bands like Jeff the Brotherhood, Heavy Cream and Pujol all seemingly follow the same rock and roll or die ethos. Turbo Fruits put on a show that combines such a value with a slick, attitude. Cigarettes hang from their lips, the on-stage beer flow is everlasting and Jonas Stein is fearless in his audience interaction. 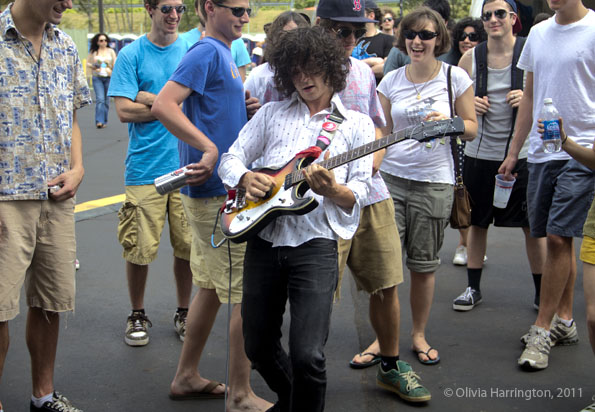 Does this image look familiar? It if ain’t broke, don’t fix it and Stein’s commitment to audience participation (or at least their use as an leaning structure) is commendable. 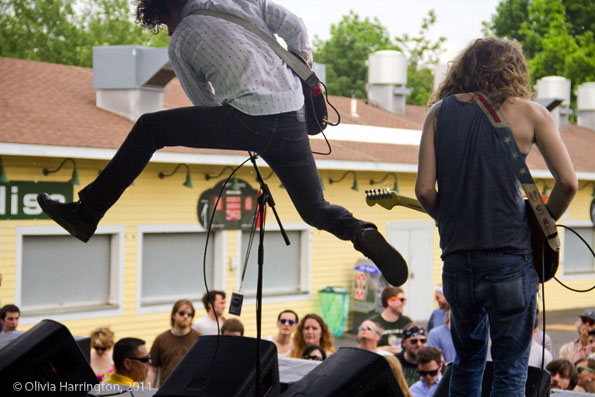 While Turbo Fruits may be learning to cut their teeth with crowd participation, the title of King of Audience shenanigans goes to: 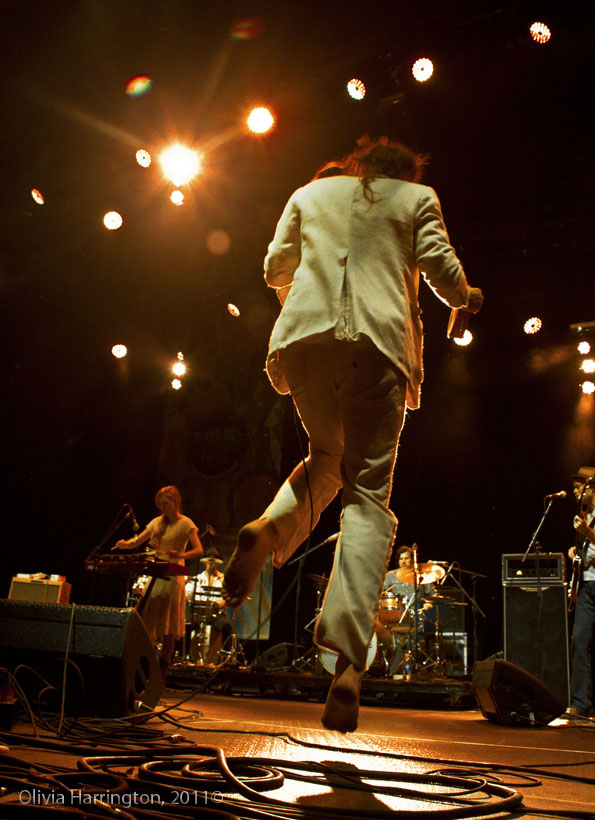 When Alexander Ebert, lead singer of the hippie caravan Edward Sharpe and the Magnetic Zeros, took to the stage it took only a brief moment and quick hop over the barricade for him to be doing this: 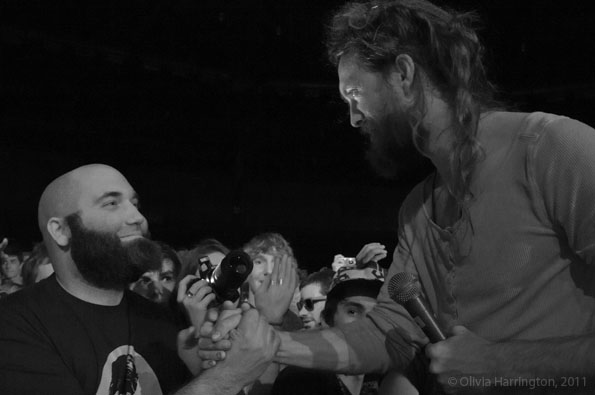 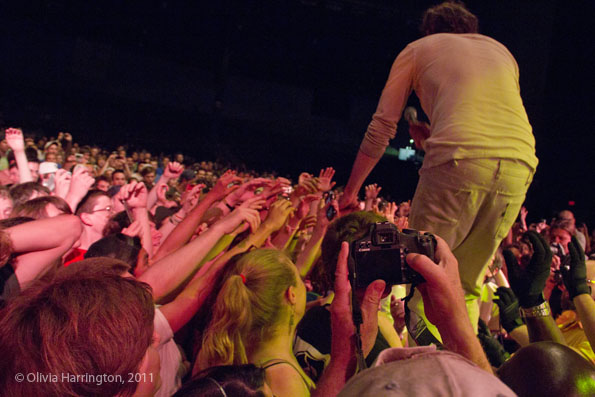 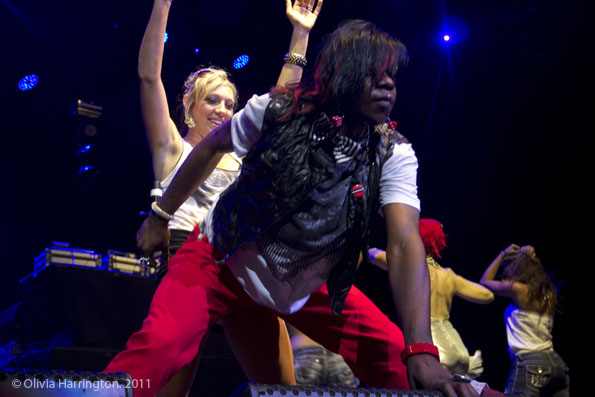 One of the leaders of the Sissy Bounce movement, it was a shame to see the audience boo the performance, eventually throwing bottles onto the stage. While a discussion of a much deeper issue is at hand, for now let’s just hope that Big Freedia and the gang keep their heads up… and asses out

Despite that the King of dank kept the audience waiting for 45 minutes, it’s likely that Snoop Dogg can rest assured that most everyone forget once the show, and the smoke, started. 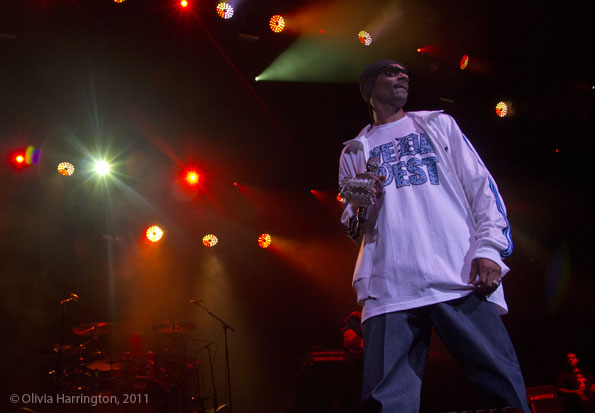 Best ‘In a Class of Their Own” Band: Weezer

At this point, Rivers Cuomo could play music with his own spit bubbles and crowds would go wild. Of course, if you ask around, many people might say that some of his more recent ventures are the seeming equivalent. Whether you care to agree or disagree, Weezer fans and new-era critics alike would have been delighted to see Saturday night’s show when Cuomo said, “We hear there are a lot of old school fans here tonight. We’re gonna play a bunch of songs from the Pinkerton album. I hope that’s okay.” And, of course, it was. 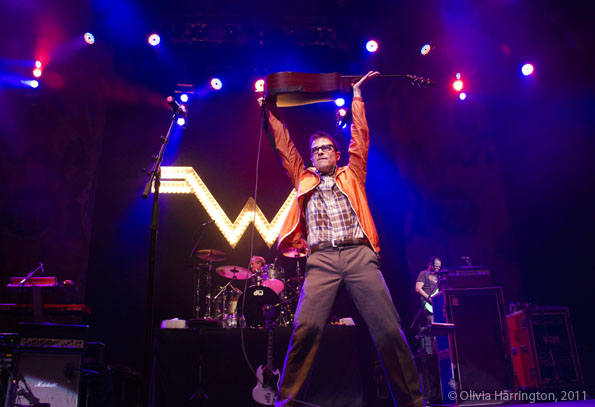