The last day of ACL started slowly but I was able to make it to the last bit of Mariachi El Bronx at the AMD Stage. They’re exactly what you’d think a mariachi band from LA would be whose other band happens to be punkers The Bronx. 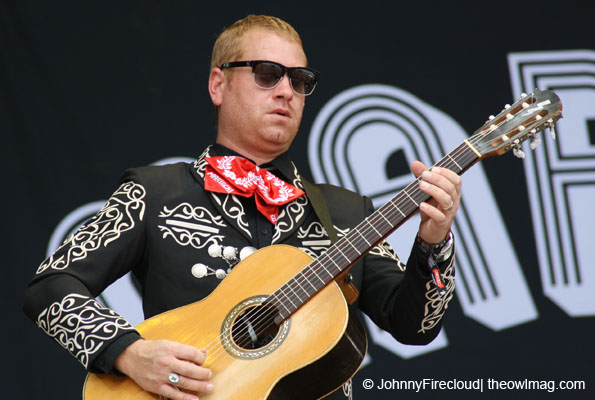 The band, dressed in full mariachi attire sang songs of love and loss just as ridiculous as their Hispanic counterparts, only in English. It was an incredibly hot day; weather as usual for Austin, so I headed to the press/VIP area to hydrate before heading to the Honda Stage for Dale Earnhardt Jr. Jr. 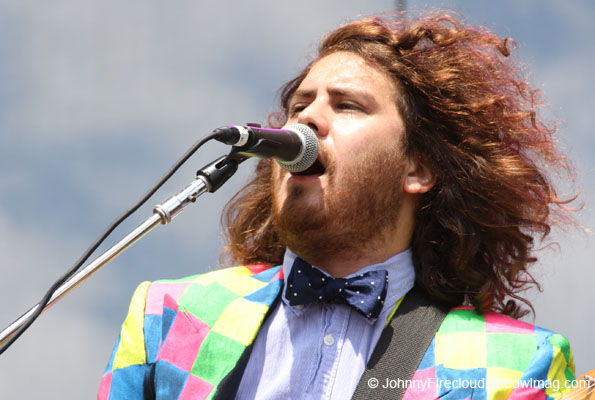 Despite their silly name, Dale Earnhardt Jr. Jr. play seriously solid indie pop of the dreamy variety.  Their endearing brand of love songs and hand-clapping jams, mostly from their debut album, It’s a Corporate World were a wonderful addition to the sunshine-filled day. 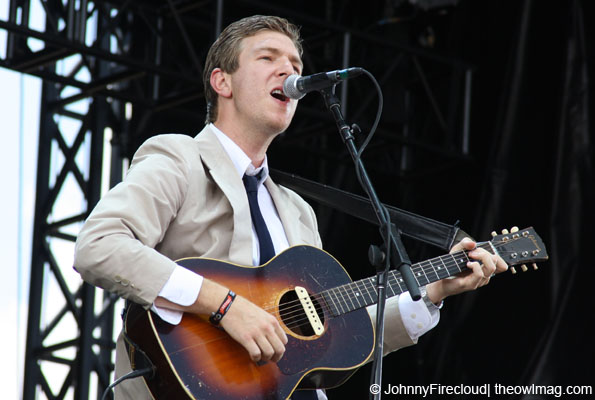 After their set, I split my time between The Walkmen and The Airborne Toxic Event. The Walkmen saw a great turnout of fans and played a rocking set, with organ-esque synth mingling with jangly guitar. Just like Mariachi El Bronx, the band was also wearing some seriously snazzy clothes. Though the other band members eventually rolled up their sleeves, lead singer Hamilton Leithauser sweated up a storm in his business attire, powering through a beautiful version of “In The New Year.”

The Airborne Toxic Event was up next on the main stage, giving me another cover to enjoy. They dedicated their version of “I Fought The Law” to all the police officers who’ve ever detained them over the years, including some in Vancouver, British Columbia.

After a quick listen of Ryan Bingham and The Dead Horses’ mesmerizing folk goodness, it was off to AWOLNATION. Originally started seemingly on a whim for former Hometown Hero singer Andrew Bruno, AWOLNATION draws from heavy electronic effects, the grunginess of Bruno’s past, and mesmerizing guitars. AWOLNATION played from their critically acclaimed debut, Megalithic Symphony, giving an energized performance at the Honda Stage. 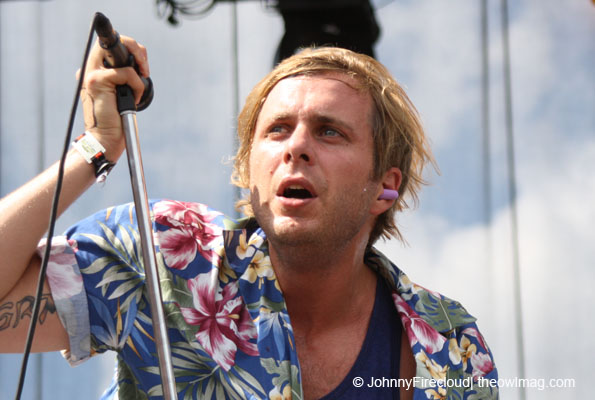 By the time I made it back to the main stage after almost drinking my weight in water, Broken Social Scene had just started their set. Broken Social Scene is huge and Canadian, which they were quick to point out. The Toronto-based baroque pop supergroup were tight in their arrangements, playing to a decently-sized, sprawled out crowd.

Though also hailing from Toronto, Death From Above 1979 was the exact opposite in style yet the feel of good music was still there. The band only recently reunited this past February, following almost 5 years of silence. ACL was just one of many festival stops for DFA this year. 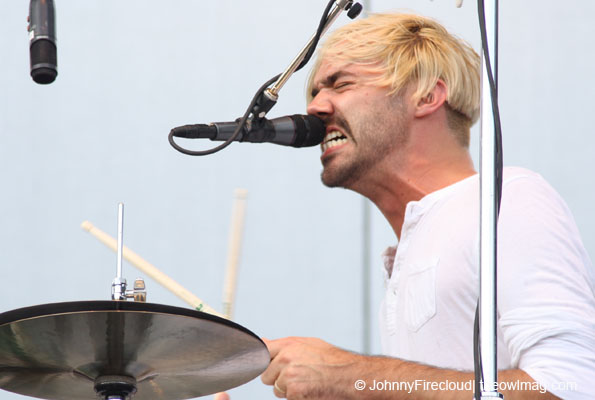 DFA’s stage presence and ass-kicking enthusiasm is at once both infectious and playful, as singer-drummer Sebastien Grainger declared the audience to be sadists for still wanting more music after such a busy weekend.  That remark came after first finding out the difference between sadism and masochism from none other than the audience themselves. 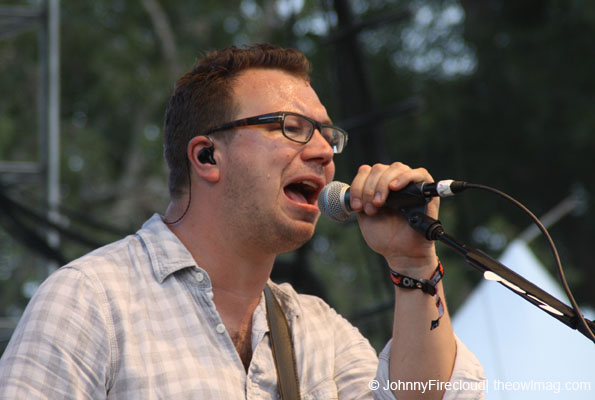 Gomez had just started their set right as DFA was wrapping up. Though I hadn’t heard much about them before, Gomez are indie rock veterans and their mad musical experience made for a great set before it was back to the main stage for Fleet Foxes. 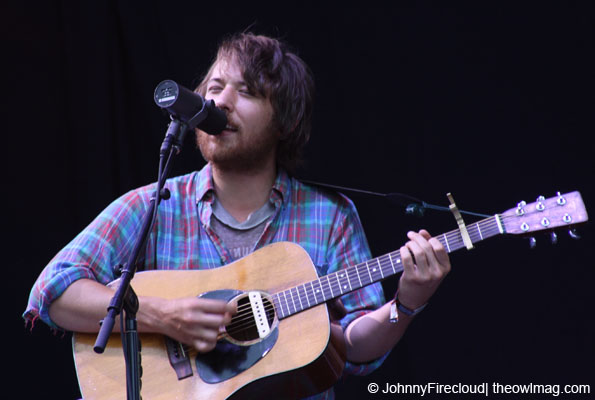 I’ve had the fantastic opportunity to see Fleet Foxes many times over the years and their ethereal harmonies never get old. Lights and sound came together perfectly as clouds continued to shift in front of a setting sun. Fleet Foxes were the talk of many fellow concertgoers, who were absolutely stunned by their mixture of rock and folk and everything in between. 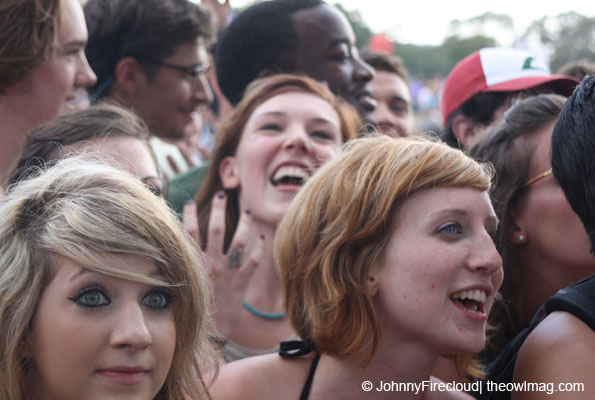 Headliner Arcade Fire closed the festival with a truly impressive set, playing mostly from their Grammy award-winning album, The Suburbs. Those headed to the main stage early were greeted with a faux movie marquis that read, “Coming Soon: Arcade Fire.” Once their set did start, a short film about the suburbs ushered out the band. Arcade Fire had just played Austin City Limits (the show) the night before. 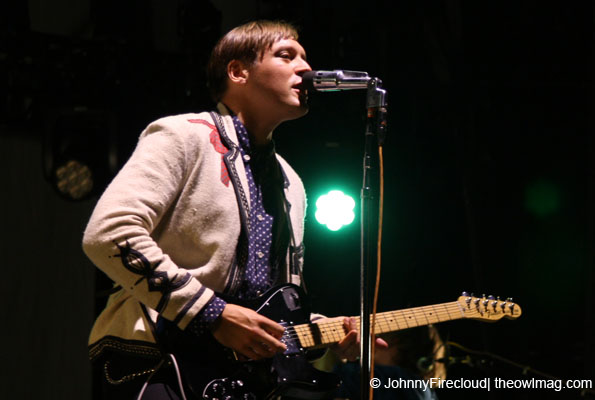 Given frontman Win Butler and fellow bandmate Will Butler’s upbringing in nearby The Woodlands, the brothers and the band were incredibly gracious about playing the festival, saying that it felt more like a homecoming and that they’d actually begged to play ACL. Their wish was granted to the joy of tens of thousands of fans at Zilker Park.

This time C3 had really gotten the sound right. Since Sundays usually mean there’s just one headliner, the entire festival crowd was packed tightly around the main stage, with many seated as far away as the Google+ stage. It seemed there were no noise complaints. I ended up in the middle again and didn’t hear a single chant to turn it up. 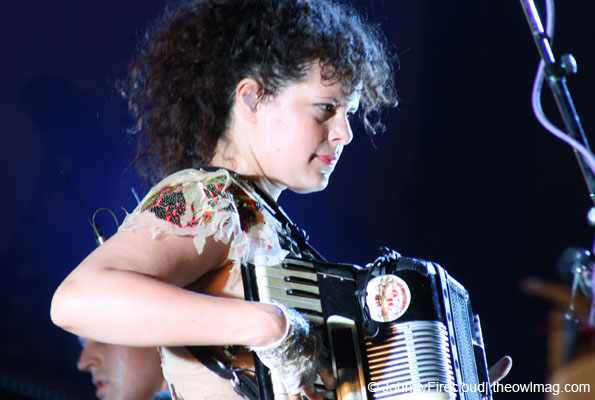 What I did hear were the collective voices of a very happy festival audience during Arcade Fire’s “Wake Up” and their many, many hits. Those who left early to beat the ensuing chaos of a large festival letting out were still treated to one hell of a show and for ACL’s 10th anniversary, I couldn’t think of a better way to end it.