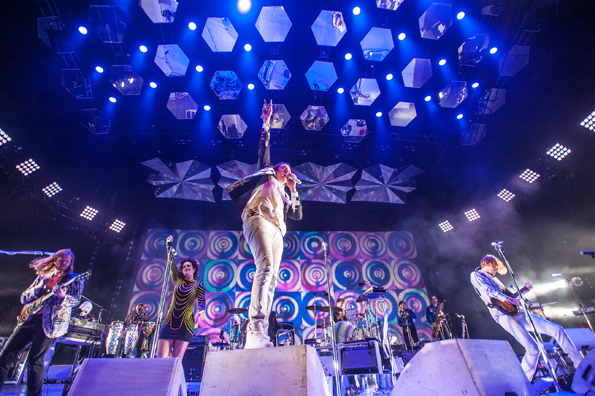 all photos by Chris Tuite

After waiting eight months since we purchased our ticket, the day had finally arrived when we got to see Arcade Fire again. In typical hump day style, Wednesday was a little rough so we were in need of a serious AF dance party. And well hotdog, if Arcade Fire doesn’t make everything right in the world, then we don’t know what else would.

The Reflektors – AF’s decoy papier-mâché headed band – opened the set with “Uncontrollable Urge”, giving us a bit of Devo since Mark Mothersbaugh, Devo frontman, sadly got caught in a kayaking accident and was unable to open for AF. The “yea yea yea yea yea”s of the chorus got everyone’s bodies moving and successfully built the anticipation to the max so we all went a bit bananas when the “Reflektor” beat kicked in and the real life Arcade Fire took the stage. From that first beat on, the audience was held in the hands of Win Butler and the gang. They said clap, we clapped; they wanted our hands in the air every time they sang “Lies! Lies!” in “Rebellion (Lies)”, we put our hands in the air, they wanted us to dance to the beat of the bongos, we moved our hips like the best of ‘em. 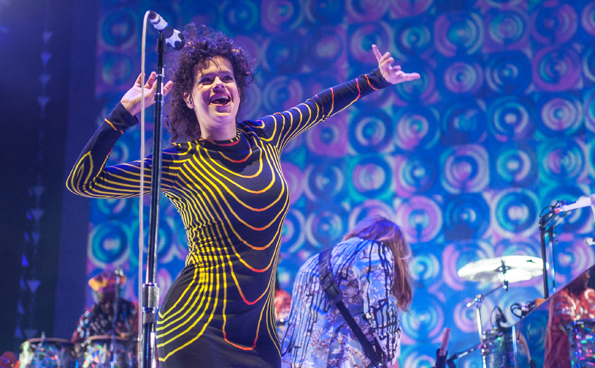 AF proceeded to get into the meat of the setlist mixing in the old with the new and keeping everyone dancing – the four people next to us oddly ended up leaving so we took advantage of the extra space and busted out some of our best dance moves. Win took a break from singing to pass the mic to some dude in the crowd who was actually pulling the most epic of surprise proposals. The timing was perfect for Win to say, “soon everyone that loves someone else will be able to get married in America” leading seamlessly into “We Exist” from Reflektor.

On Neon Bible‘s “No Cars Go” Régine Chassagne busted out the accordion while Sarah Neufield and Owen Pallet played some killer violin. In standard fashion, throughout the show Richard Reed Perry, William Butler, Tim Kingsbury, Jeremy Gara bounced around to every instrument under the sun showing off their musical versatility. Bringing the Caribbean beats, prevalent on the new album, were Tiwill Duprate and Diol Edmond who kept the bongos banging. An appearance was made by the reflecting Reflektor mascot (we guess that’s what we are calling him?) acting as a human disco ball out in the crowd during “Afterlife”. *And quick side note…raise your hand if you would be stoked about being a human disco ball at an Arcade Fire concert?!* ::slowly raises my hand:: 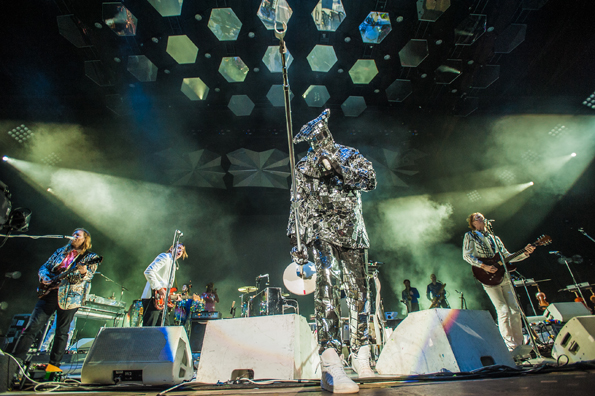 After an impressive vocal showing by Régine during “Sprawl II (Mountains Beyond Mountains)”, AF left the stage so The Reflektors could play their final song, “Power of Love” by Huey Lewis and the News. However, soon Arcade Fire replaced them once again to play their encore, which included a bit of the Ghostbuster theme song, a cover of Bay Area’s Creedence Clearwater Revival’s “Hey Tonight” as well as everyone’s favorite concert accessory, confetti!

We have to admit we were a little hesitant about seeing them in such a large venue, but we were not disappointed because…duh…Arcade Fire knows how to put on a show! Their concerts rank #1 and 2 in our book (and there are a lot in that book) so don’t miss your chance to snag a ticket when they’re in your neighborhood. 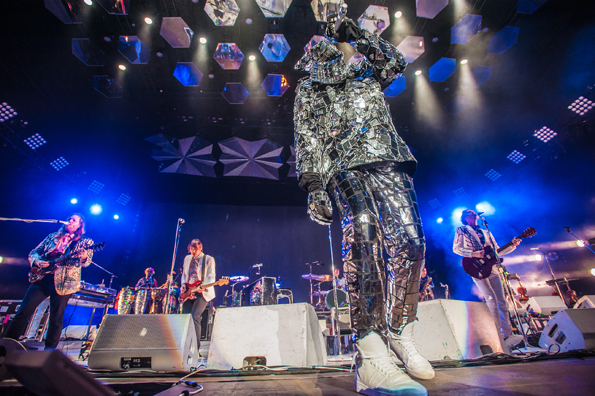 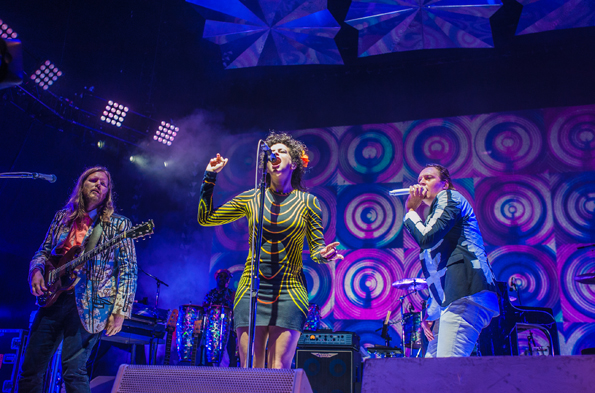