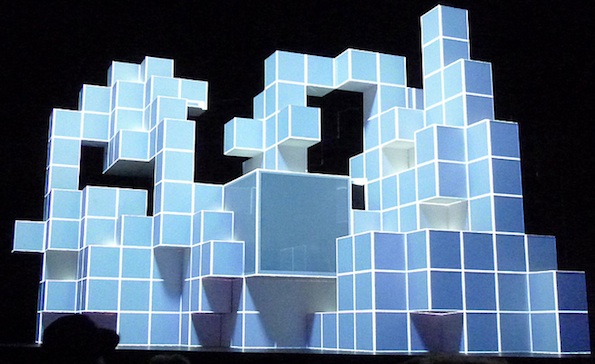 Amon Tobin’s much buzzed-about Isam tour consists of sticky, dub step-inspired soundscapes, with wobbly, grinding beats moving to an audio reactive light show gloriously projected onto a 25′ x 14′ x 8′ cubist structure from which Tobin plays inside of. The effects of the show are difficult to summate, although my initial attempt at categorization falls along the lines of “dub step cinema.”

The show begins with a reveal of the night’s main attraction, the Isam stage, a sight to behold for a crowd that had only previously ingested the monstrous structure of white cubes on YouTube and Vimeo. After the initial screams and applause at the sight of it all, the projector bulb fired up, sending light beams dancing across each cube while a cavalcade of sound erupts through the speakers, an inorganic noise buffet that makes you think “this is what it must sound like when Transformers have sex.”

Alternating between pensive, explosive and everything in between, each track within the 50-minute Isam mix corresponds to an entirely new and delightful visual theme, a never ending light show dancing between the billions of mapped points that lie on the surface of each cube. A full palette of digital color and animated angular fluidity is presented, a diverse range of images and patterns that reveal what God’s screensaver must look like. Like any theatrical performer worth the price of admission, Tobin finishes the first act on a high note, shooting countless pounds of white, rectangular confetti into the air over the entire crowd for a good 30 seconds, the disorienting effects only amplified by blinding strobe lights from the stage. 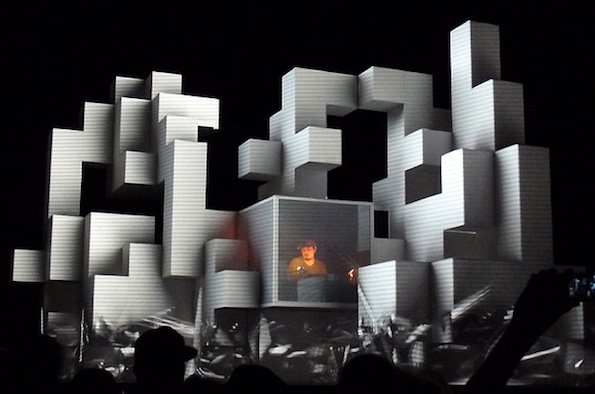 It was refreshing to see that Tobin wasn’t completely hidden from the crowd during the performance. Throughout the night, Tobin randomly illuminated the interior of his centrally located “command station” cube with a single light, revealing a man alternately focused on the A.V. controls in front of him and the computer screens to his right, rarely taking his eyes off of his equipment, his head never missing a beat. Each flash glimpse of the small, goateed Brazilian was met with eruptive applause, and as quickly he appeared, Tobin would switch off the lone light and return to the darkness of the Isam set, the square glass from which he, mere seconds before, could be seen bobbing behind, once again assuming the role of photon canvas.

After powering down and emerging from behind the Isam set, Tobin seemed dwarfed by the backdrop of his show while he kowtowed and high-fived eager fans. His appearance during a brief intermission and reappearance following the encore served as a reminder that there is in fact someone orchestrating the alien symphony. Tobin’s sheepish grins under the house lights seemed to only solidify the suspicion that Isam is the crowned jewel of his life’s work, his own 5th (or rather, 7th) symphony.

The Isam experience has raised the bar for the perpetually evolving electronic music scene, a genre that finds itself scrambling to keep up with its audience’s insatiable need for hyper-stimulation and sensory bombardment injected into live performances. Before taking in Isam, it seemed natural to want to group Tobin together with existing electronic artists. However, Isam is more sensory immersion party than dance party, and it’s difficult to conjure a comparison or allude to precedent. The theatrical elements of the performance forcefully demand full attention, lest your eyes and ears miss a single shot of stimuli.

You should listen to Isam on Amon Tobin’s Soundcloud, complete with annotated commentary on the production of each track from Amon himself.