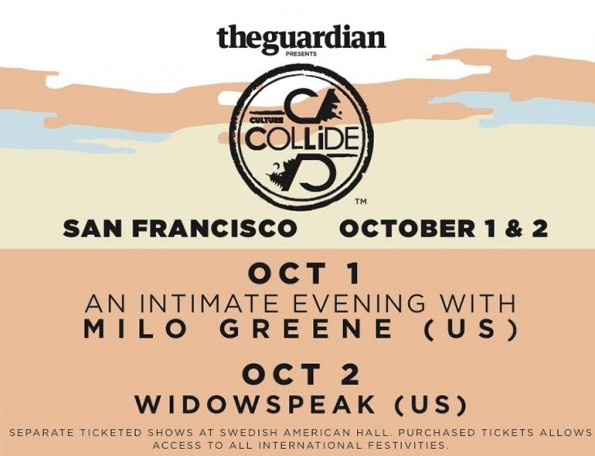 Hey you! You know what’s better than seeing a bunch of international bands on October 1st and 2nd in San Francisco? Doing it for free! Culture Collide Festival returns to the Mission District for its second year, and with a bunch of shows all happening within walking distance, it’s an awesome way to spend two evenings. With it being presented by The Guardian, and co-produced by our friends at NoisePop and Culture Collide, you know every act is gonna be great. Sounds good, right? We think so too.

We are giving away a pair of tickets to Milo Greene‘s headlining show on Thursday 10/1/15 and a pair of tickets to Widowspeak‘s headlining show on Friday 10/2/15 at Swedish American Hall. In addition to these amazing shows, the lucky winner will also gain access to more amazing shows that are a part of the International Showcase featuring Canadian funksters Busty and the Bass, South Korean dream poppers Heo, South African blues rockers Shadowclub, and many more! Got it? So that’s two pairs of tickets for two headlining shows, which gets you access to even more amazing international shows, all for one lucky winner!

To enter, send an email to contests@theowlmag.com, by 10:00 am PST on Tuesday, September 29th. Include “Culture Collide @ San Francisco” in the subject line and your full name in the body of the email. The winner will be contacted shortly thereafter. Good luck!

If you’re not the gambling type, tickets can still be purchased for Culture Collide here.

Check out some of the bands featured in the International Showcase: