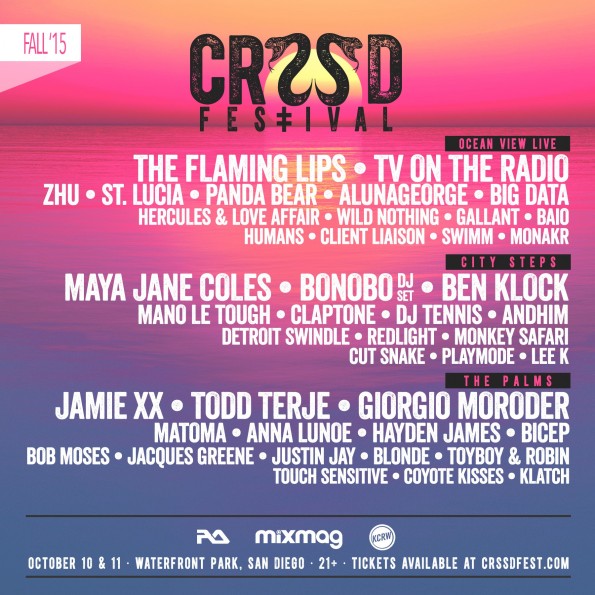 Presented by FNGRS CRSSD and Goldenvoice, the second incarnation of CRSSD Festival will enliven San Diego’s Waterfront Park on October 10th and 11th. The 21+ festival’s electro-centric lineup will be dispersed among three stages – Ocean View Live, The Palms, and City Steps – and will run the electronic gamut from house, experimental, techno, trip-hop, dubstep, minimal, and synthpop varieties. This season’s stacked lineup is a distinct upgrade from the festival’s inaugural edition this past March; with the likes of headliners The Flaming Lips, TV on the Radio, Jamie xx, Banks, Panda Bear, Todd Terje, and a Bonobo DJ set, CRSSD has swiftly upped its game.

We’ve created a playlist of our Top Picks from the Nest to help get you pumped for CRSSD, complete with majorly-hyped acts and hidden gems alike. Check it out below!

Tickets, directions, and details for CRSSD can be found on their website. Also, to hold you over until the big weekend, check out their WeTransfer Takeover download, featuring free music (and randomly, a spaghetti recipe) from artists appearing at CRSSD Festival.