The Artists’ Guide to Coachella 2016 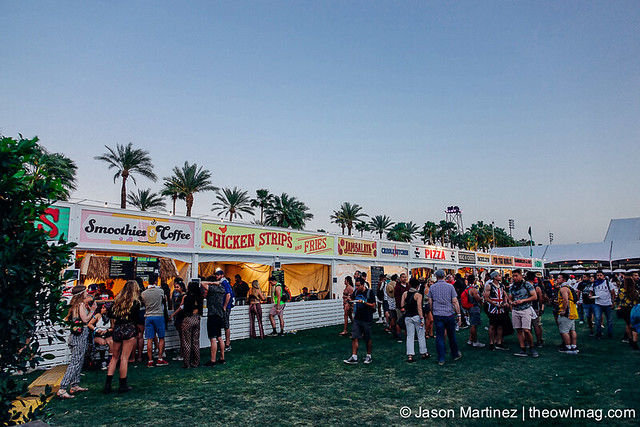 It’s April, so you know what that means, friends: It’s Coachella season once again, woot woot! Three days of rockin’ out for two weekends! But with over 13 hours of outdoor music every day, even the most die-hard of fans has to take a break some time. Hell, even if you’re up for 15 hours of moshing, you gotta stop to eat, it’s a scientific fact! Luckily, Coachella’s got you covered with over 50 food vendors and dozens of activities. The sheer number of options might seem overwhelming, but no worries, that’s what we’re here for. We enlisted the help of Coachella performers Robert DeLong and The Front Bottoms to help you figure out where to spend your precious time, and where to ingest your precious calories. 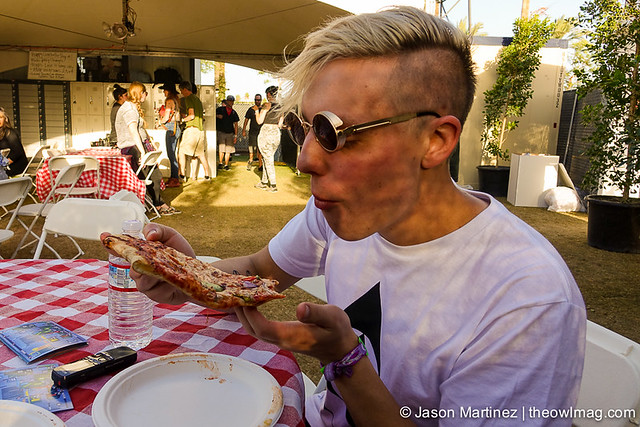 The Tester: Robert Delong. Having just released his second album, In The Cards, this electronic wunderkind is an amazing live performer. His weekend one set, which had him running around a brand new, multi-level stage setup, featured guest appearances from violinist Lindsey Stirling and fellow Coachella performer Kamasi Washington.

The Subject: Spicy Pie. Founded in 2000, this nomadic pop-up restaurant that specializes in slingin’ slices at music festivals has become one of the most in-demand food vendors at Coachella. But is it worth the hype?

The first slice that Robert tried was the Gnarley Marley, so named because “it’s got herbs,” along with fresh-cut veggies and Parmesan cheese. “It’s pretty good,” noted DeLong. “I like spicy shit, though, and it’s kind of tame,” he said, seeming to lament the pie’s lack of kick. “It’s good, though, but am I gonna get high from this?” This being a music festival, it was a valid concern.

“Now this looks right up my alley,” said a delighted DeLong when he spied the jalapenos, pineapple, and crushed red pepper on the second slice he sampled, the Hot Lips Hulahan. “That’s what’s up. I love anything with jalapenos on it.” 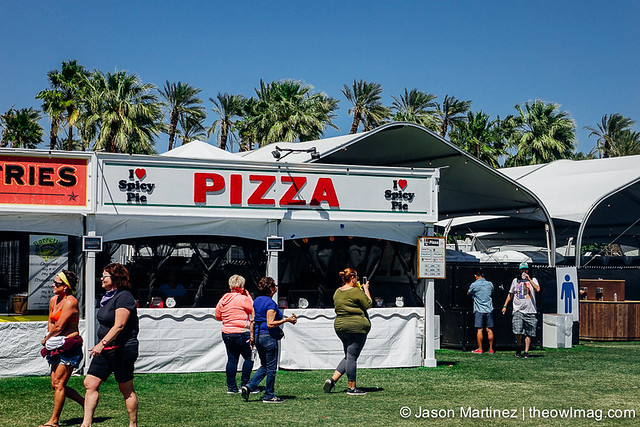 The Verdict: “I give the Gnarley Marley three stars, but the Hulahan gets a firm four stars. I might even give it five stars, but you never know, there could be something better out there.”

Recommend for Weekend Two?: “Yeah, absolutely. Get the Hulahan, that shit’s dope.”

Robert DeLong performs Friday at 3:45 in the Outdoor Theatre. 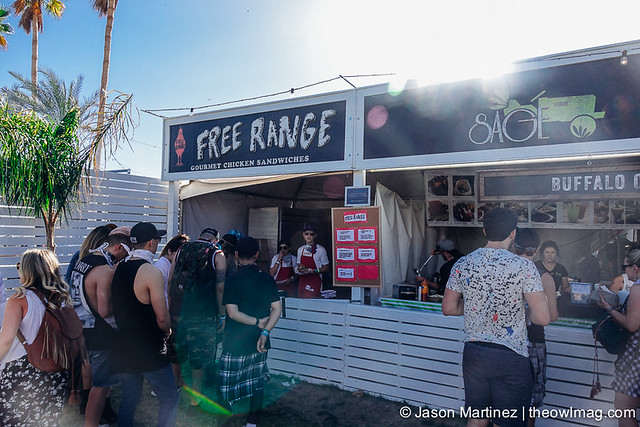 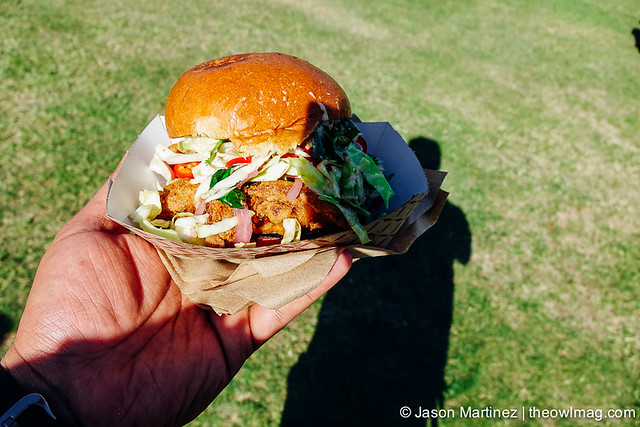 We also sampled a number of different foods on our own, including the OG Chicken Sandwich from Freerange LA (really great!), the Truffle Cheese Fries from Eureka! (amaaaazing!), and the Lobster Roll from Wicked Maine Lobsters (not bad, but probably not worth the over $20 of market price + tip). 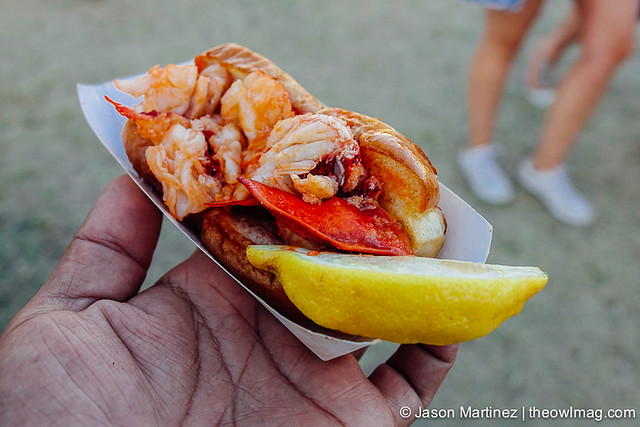 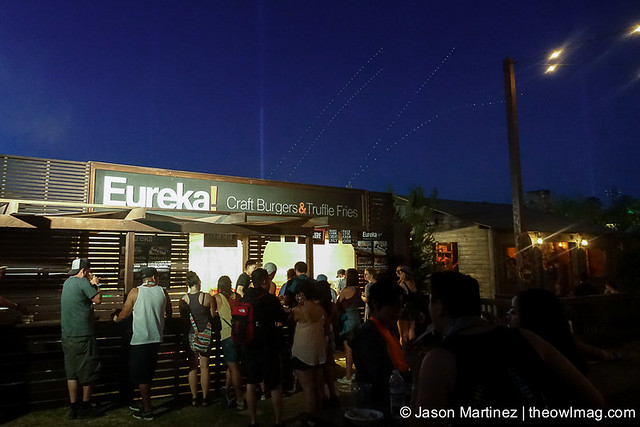 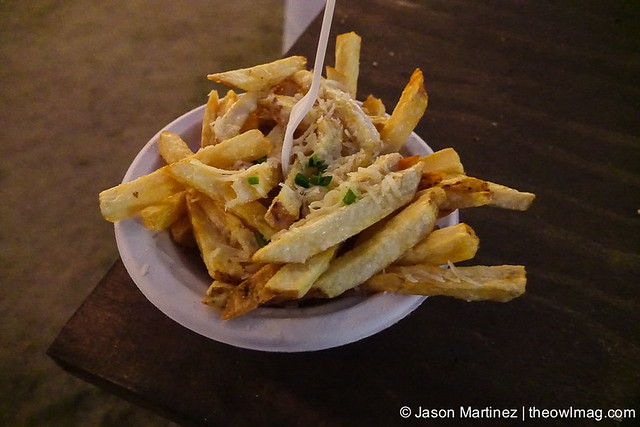 The Testers: The Front Bottoms. These New Jersey born-and-bred bros are purveyors of some of the most delightfully wounded and clever folk-pop-punk you can find, especially on their recent fifth album, Back on Top. Their sunny tunes are the perfect way to kick off your bright and shiny weekend. 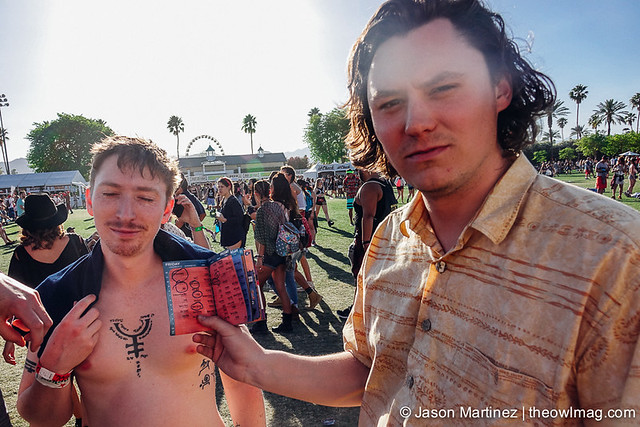 The Subject: We were gonna take The Front Bottoms to one of Coachella’s beer gardens, but they didn’t have their 21+ wristbands yet, and with their tight schedule, the long line made the prospect of getting those and then going through the long line into the beer garden a no-go. We were then gonna sample some ice cream, but the line for that was longer than the beer garden.

The Bottom line: if you’re gonna try to eat or drink at Coachella on Saturday at 5:30, be prepared to wait. A lot.

We did get to hang out with the guys, though, and they told us about what they like to do when they’re not onstage. 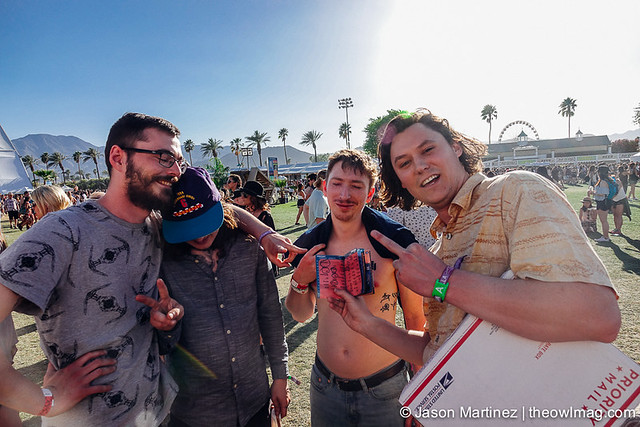 “We like to watch the Warriors and barbecue during our down time,” said drummer Mat Uychich. “The basketball team, but the movie’s pretty good, too.” When asked about the Steph Curry and Co’s record-breaking season, bassist Tom Warren said it was “amazing. If I could put it into one sound, it would be Wa-ha-hoo!” Warren also loves hockey, specifically the band’s Garden State brethren, The New Jersey Devils.

Wait, how do these guys like the Golden State Warriors if they’re from New Jersey? Shouldn’t they like the Nets? “The Warriors are just good, they’re entertaining,” answered Warren. “Have you seen the Nets?” asked guitarist Ciaran O’Donnell. “Plus, they ditched us for Brooklyn.” In addition to basketball, Warren is also a big fan of Marvel comics, adding that he loves the new Black Panther series by Ta-Nehisi Coates and Brian Stelfreeze, and the new Black Widow series by Mark Waid and Chris Samnee.

The Verdict: When asked for a recommendation for Coachella Weekend Two, singer Brian Sella fell back on an old favorite. “Hot dogs are always my go-to, but that’s nothing new.” While they might not be the coolest thing, they are readily available throughout the festival grounds, and, we posited, you can’t go wrong with a hot dog. “I couldn’t agree more,” he laughed. “Life is better between two buns,” added Uychich. “We also wanna recommend peace and love,” and really, that’s good advice no matter where you are.

The Front Bottoms perform Friday at 2:35 in the Outdoor Theater. 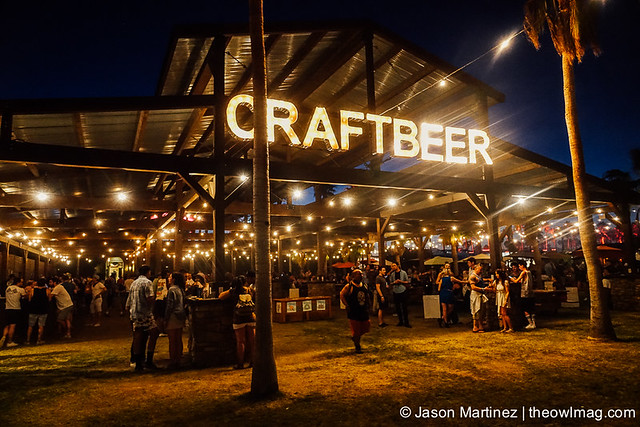 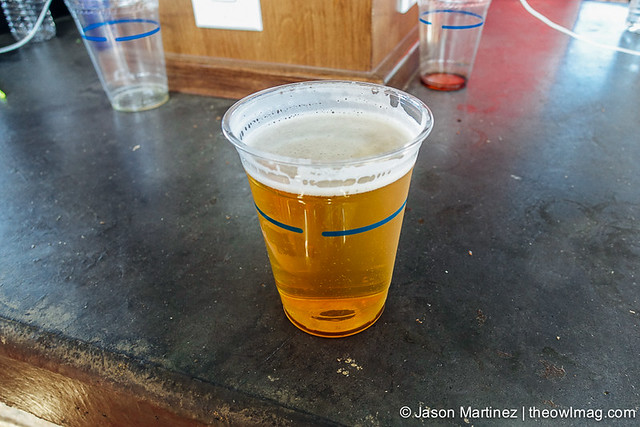 A pint of Insomnia IPA by Wiens Brewing Company (instagram @wiensbrewing), available in the Beer Barn

We did sample some of the beer gardens on our own, including the one in the Food North area, where pints of mass market brews are ready to go, and the Beer Barn tucked behind Terrace South, which offers local and domestic craft beers fresh on tap, great food, and even classic arcade games. 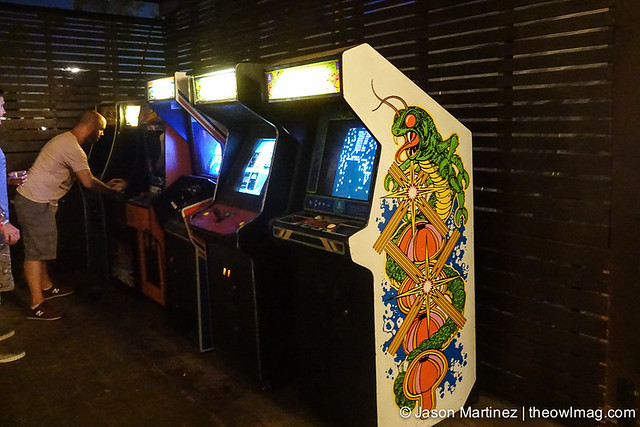 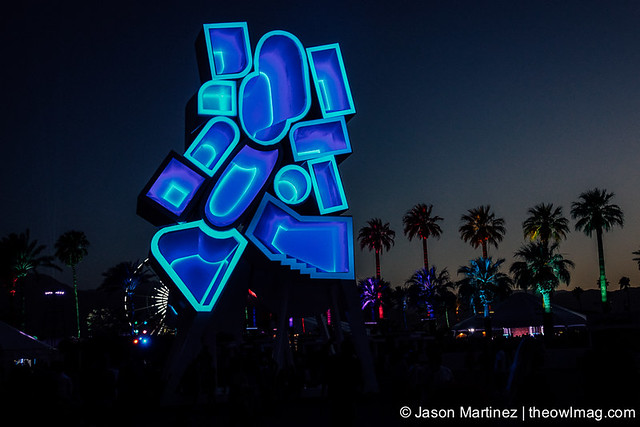 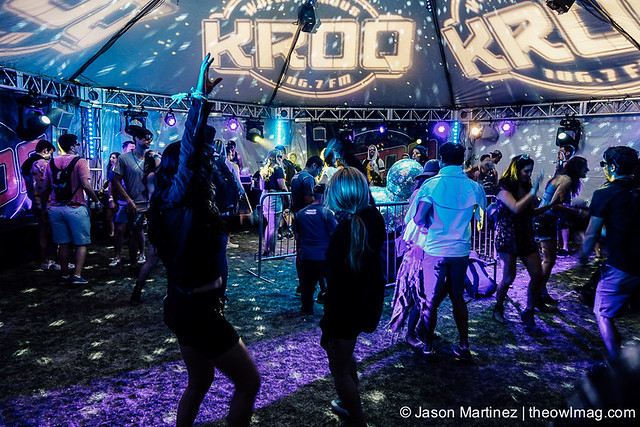 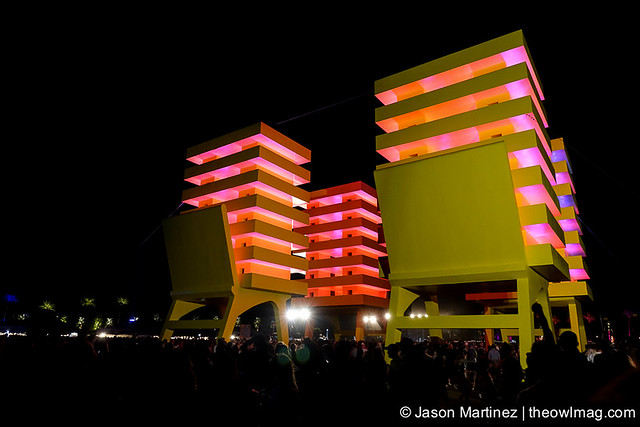 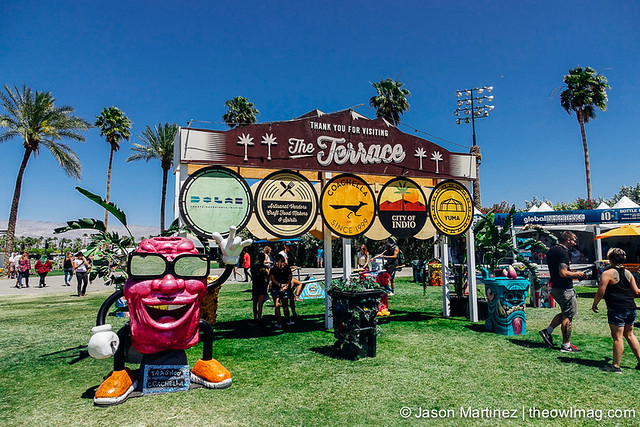 The Raisins who bids you adieu as you exit The Terrace

Check out the music video for “Long Way Down” by Robert DeLong:

Check out the music video for “West Virginia” by The Front Bottoms: