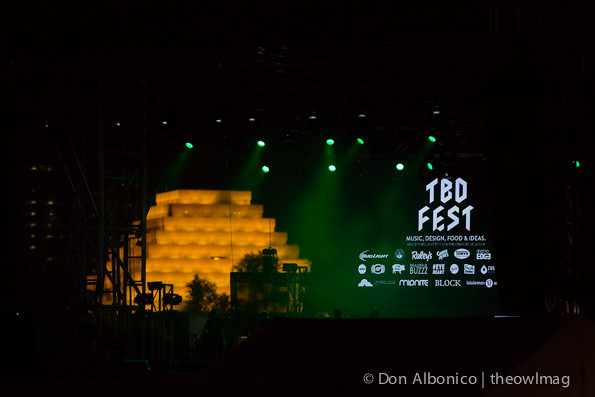 Saturday’s TBD Fest (or as we lovingly call it, The Big Dust Fest) continued its upward trajectory with a sold out day. Based the lessons learned from the day before, festival organizers made critical overnight improvements in preparation for the big day ahead of them – most notably the addition of hydration stations for festival goers to help beat the stifling heat. With such a packed schedule of amazing talent, we spent the entire day running from stage-to-stage to bring you our top moments from Saturday’s festivities. 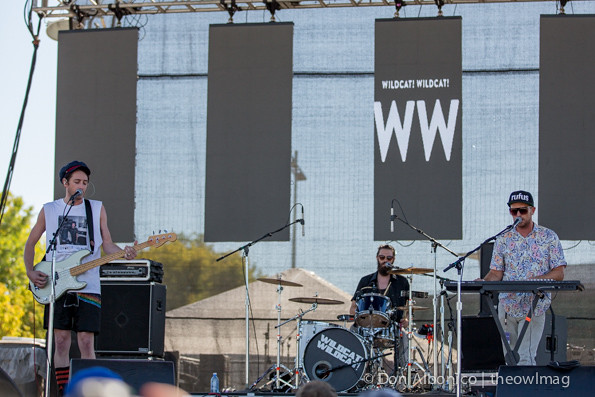 Wildcat! Wildcat! – “Best way to kick off a tour”

TBD Fest marked the start of Wildcat! Wildcat!’s tour in support of the Los Angeles-based band’s debut album No Moon At All. The early afternoon crowd huddled into the patches of shade cast by the Beautiful Buzz stage when singer Jesse Taylor encouraged people to avoid getting heat stroke. Touring as a foursome, one of the most striking things about Wildcat! Wildcat!’s set was the way their recorded vocals beautifully translated live and sounded even more heavenly during set opener “Tower // W.O.H.L.” and “Garden Grays.” Even when the sound cut out during “Holloway,” Taylor and Michael Wilson didn’t miss a beat in their vocal delivery. If the bands’s set was indicative of the rest of the tour, then these guys are going to impress a lot of folks this fall. 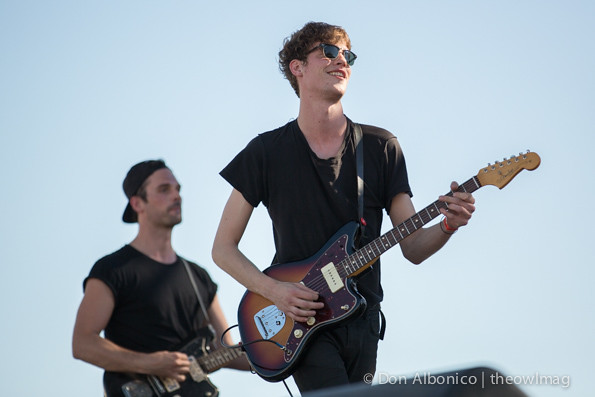 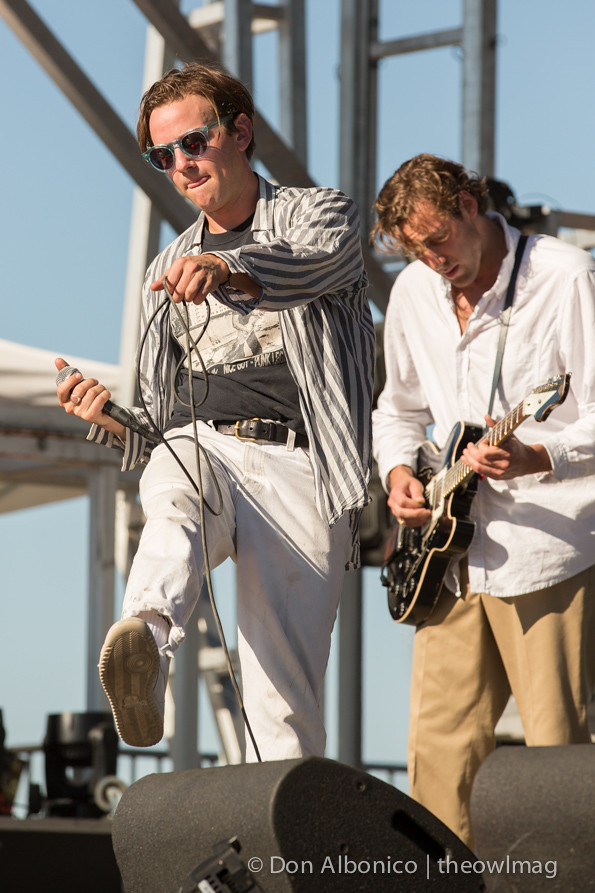 New York-based bands Drowners and SKATERS were two stand-out bands on Saturday that made us thank our lucky stars that rock n roll is alive and well. It was difficult to not make comparisons between singer/guitarist Matthew Hitt of Drowners and his UK brethren Alex Turner with his striking good looks and stage presence. Sonically, inevitable comparisons to Arctic Monkeys came to mind during “Luv, Hold Me Down” though the live performance leaned more toward the early Arctic Monkeys grit. On the other end of the festival grounds, SKATERS’ punk-inspired aesthetic was a hit with the actual skateboarders in the crowd who raised their boards as a talisman during the the band’s performance of “I Wanna Dance (But I Don’t Know How).” Quite the meta moment. 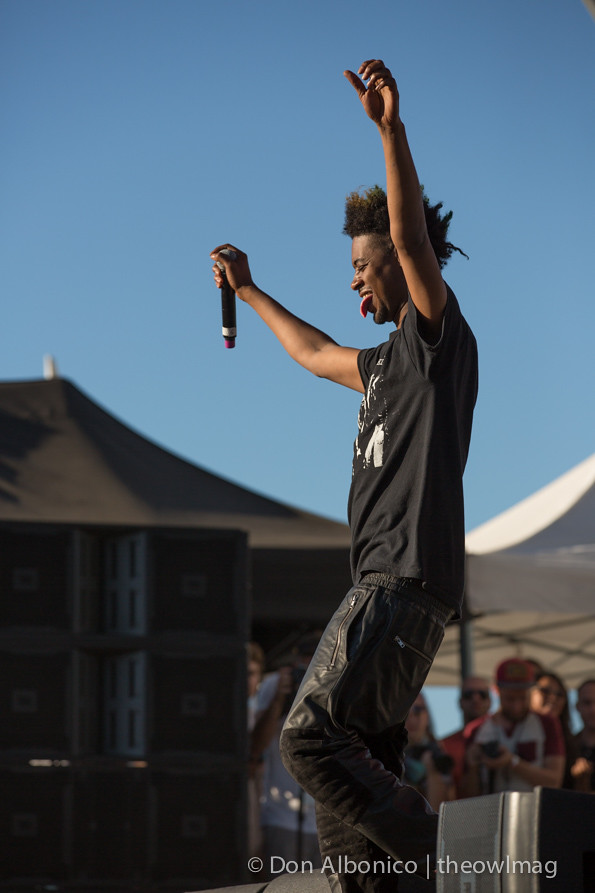 One of the more interesting moments of Saturday was watching a line in the sand being drawn during Danny Brown’s set between the under 35 and over 35 crowd, as if Danny Brown himself split the crowd in two like the Red Sea. Making his entrance to the stage for “Break It,” Brown appeared in leather jogging pants in 100 degree weather to which he later remarked “I didn’t get the memo to not wear leather pants in this heat.” Those unsure of what to expect learned pretty quickly whether quirky hard-hitting hip hopper was for them or not but not before Brown painted a very…colorful image in people’s minds as he rhythmically described “Handstand.” Maybe Brown’s set should have come with a parental warning? Warning: there will be raps about smokin, drinkin, and anatomically correct body parts. 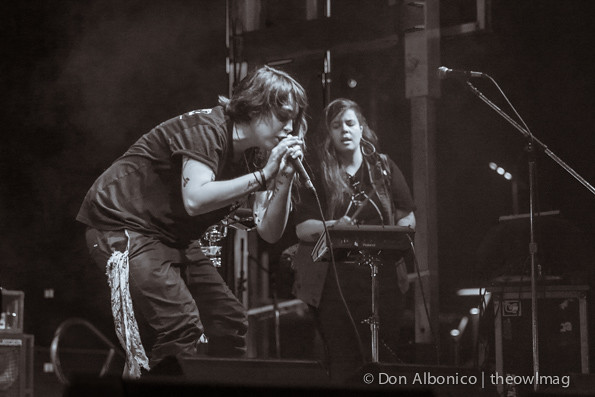 You would be hard pressed to find a more talented and more humble person than Sister Crayon’s Terra Lopez. The love that emanated to and from the Block Stage on Saturday night was so evident. Sister Crayon was hard at work in the studio for a good portion of 2014 and unveiled some of the tracks off their forthcoming record to their hometown crowd. True to her mantra of devotion, Lopez gave every bit of herself – body and voice – as her ethereal vocals soared through the night air thick with heat and dust. She means it, people. 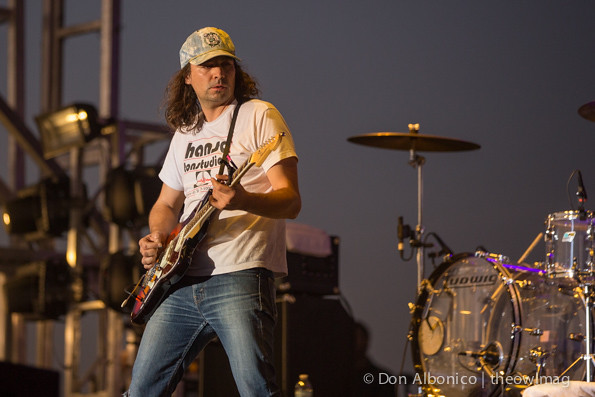 The War on Drugs – “Most unrepresentative set of the weekend”

If you asked anyone who watched The War on Drugs’ set what they thought about the Philadelphia band’s performance, the overwhelming response you would get is “the sound was terrible.” The set got off to a rocky start beginning almost 30 minutes after its scheduled start time which led to basically a condensed mini-set of only 20 minutes. Touring in support of their critically acclaimed Lost In A Dream, The War on Drugs began with album opener “Under the Pressure” as the crowd exhaled an impatient sigh of relief. Despite the sound issues, singer Adam Granduciel’s echoey vocals on “Lost in a Dream” still managed to evoke that Americana sense of nostalgia that The War on Drugs has come to be known for. 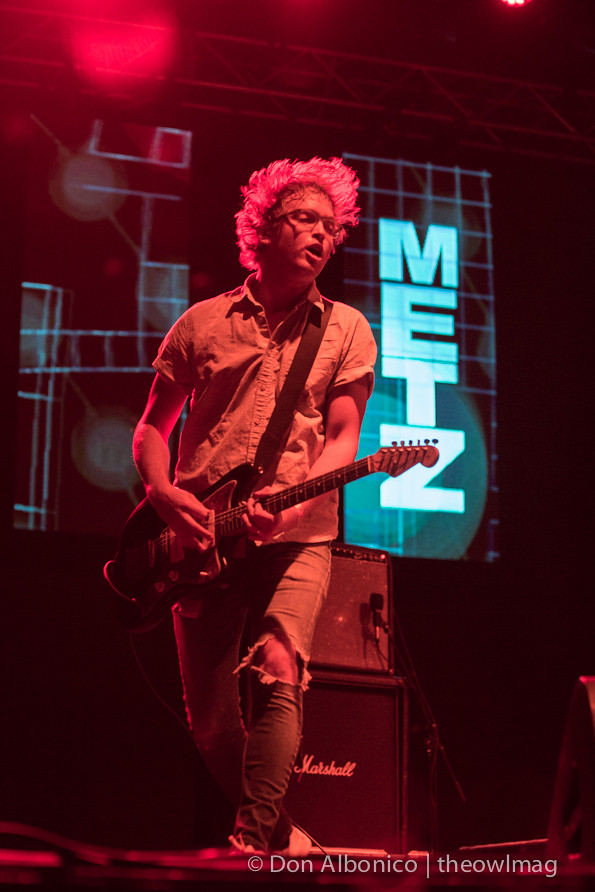 METZ – “Band you’d want to party with most”

Competing with MS MR on the other end of the grounds, the crowd for Toronto’s METZ was sparse as drummer Hayden Menzies launched into the opening booms of “Knife in the Water.” What was even more frustrating was the crowd at the Bud Light bar 50 yards from the stage had more people crowded around watching the Giants game than METZ’s set. METZ blasted through their set list of songs mostly off their 2012 self-titled album including “Get Off,” a song about forgetting all the bullshit and having a good time and “Wasted,” a love letter to Alex Edkins’ liver via some Jameson. We needed a strong drink after METZ’s face melting set. 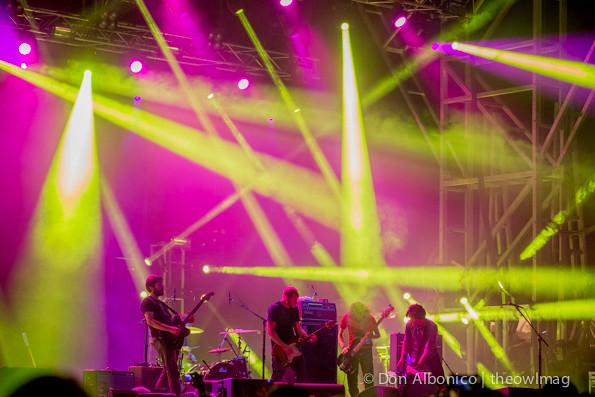 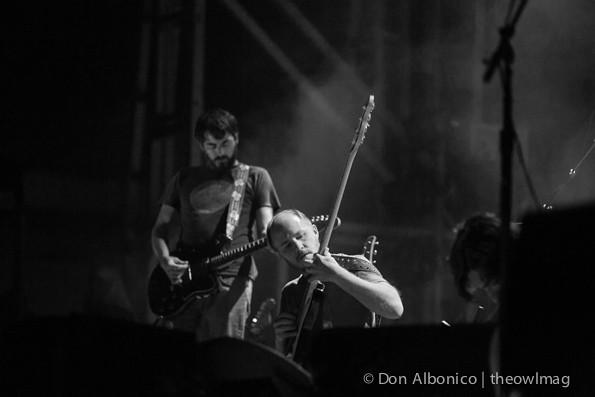 Austin’s Explosions in the Sky is a genre-defining band. No question. Whether they knew it or not, the crowd at TBD Fest was in for a truly spectacular sonic experience. A purely instrumental band, what Explosions lacks in lyrics it makes up for in the smallest nuances like perfectly pitched guitar trills that just tug at your heart and break down the barriers that suppress your best kept emotional secrets. The band was able to create an enormous wall of sound but despite its monolithic presence, the Explosions set still felt extremely individualized and tailored to each person’s internal reaction to the soundscape. If Explosions didn’t get you to feel something during their hour long set, then I’m sorry to tell you, you might be emotionally dead on the inside.

Check out a full photo gallery or Saturday’s acts HERE!

And check out our coverage of Saturday HERE!