In the past few years the market has been inundated with recording software: Audacity, Fruity Loops, Cakewalk, Propellerhead, Pro Tools, etc. Now another one comes along to inundate the market even further: Soundtap, a digital recording device from NCH which its website describes as:

SoundTap is streaming audio capture software which will convert any audio playing through your computer to MP3 or wav files. Streaming audio is recorded by a special kernel driver to preserve digital audio quality.

So I decided to try it out and see if it was worth the hype. Now, I only used the free software they offered on the site, so it could be even more intricate than what I used. However, I found it to be perfect for the novice recorder. One of the components that I found the most interesting was the tutorial on the editing software which you can download as well. For that mash-up artist in all of us it’s a perfect way to not have to go to school (like I did) to learn about how to find the perfect beat or note to throw in with that lyric that you think fits so well.

One of the drawbacks is that it says it won’t record DRM-protected content. I thought we were past this point. I understand the need to protect everything by everybody and obviously no one wants the RIAA up their ass with a lawsuit, but even iTunes has backed off their protected content stance (mainly because of Amazonian competition). Being able to record internet streams that aren’t protected or music that, again, isn’t protected is great, but what’s the difference between this and say, Audition? 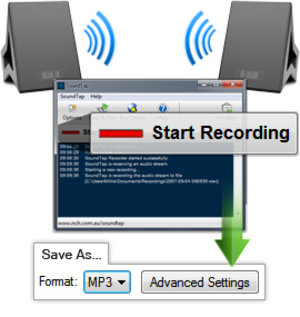 Really the only differences I noticed were the ease of use and the sound quality. I recorded a few things just to see if there was a noticeable difference between the original digital file and the recorded file and in every instance the recorded file sounded just as good, if not better than the original. With every other recording software I’ve ever used that has never been the case. There’s always some bit of decay, but not with Soundtap. The sound quality is absolutely remarkable. If you’re in a band, this might be the perfect software for you to record your practices, break them down, and see what needs work.

This would be a perfect pair for something like Turntable.fm, where you can make your own recording and feed it to the masses. I’ve never been a huge fan of Turntable.fm, mainly because it’s just like the radio. I want to be able to pick the songs I want to hear and not bounce from station to station. That’s me, though; I’m a persnickety fucker so you may have a different feeling. It could be a great place to start off as a DJ or to top off your playlist. Turntable.fm has a unique, some might even say revolutionary, grading system of awesome or lame to let you know how favorable your mix is to the faceless cogs of the interwebs.

At a price tag of $165 for the full bundled editions including the mixer, the recording, the converting, and the editing software, Soundtap fits right into that median price range. If used for professional purposes the cost is prohibitive to the potential benefits of this product. After toying around with it for almost a week I’m already a fan. I’ve had Audition for over a year now and will be making the switch to Soundtap to record all my vinyl to MP3 so that I can still get that vinyl sound, but in digital form. If you’re thinking about the next product to purchase for your band, for yourself, or just for fun, I highly recommend it. At a reasonable price and with so many ease-of-use functions, it’s easily the best new product for recording on the market.