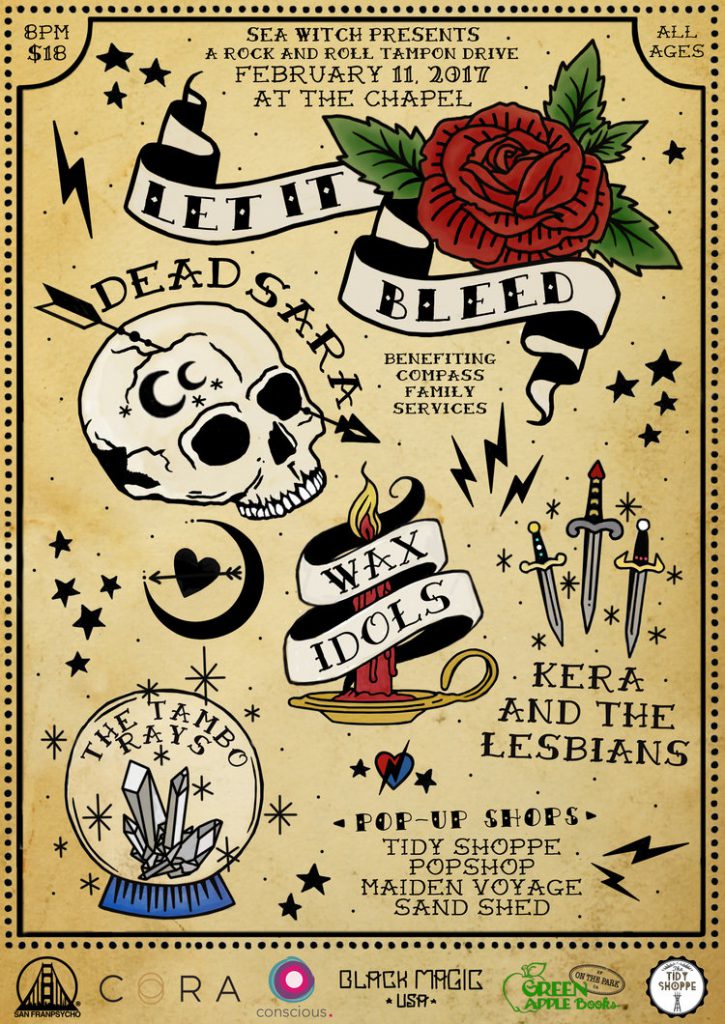 Discovering new music and supporting important issues are two of the most rewarding things we can do, and this Saturday at San Francisco’s The Chapel we get to do both at the same time!

Let It Bleed is a benefit concert for Compass Family Services, a non-profit that assists low income families in securing housing, healthcare, and employment. Presented by Sea Witch SF, the “Rock and Roll Tampon Drive” raises awareness of the disconcerting fact that four out of five states in our country, California included, tax feminine hygiene products because of their erroneous designation as “luxury items.” Bring any unopened feminine hygiene items (tampons, maxi pads, menstrual cups, etc.) to Let It Bleed for a raffle ticket to win prizes from the artists and local sponsors, including a “Feminist Book Bundle” courtesy of Green Apple Books.

The diverse lineup features Dead Sara’s hard-driving grunge, Wax Idols’ mighty post-punk gone glam, Kera and the Lesbians’ sizzling nü-blues, and the buoyant lo-fi pop of The Tambo Rays. This promises to be a fantastic night of education and entertainment well worth your time and money, but there’s no shame in saving some of that money for the bar or merch table if you WIN A PAIR OF FREE TICKETS!

To enter, email contests@theowlmag.com by 10AM PST February 10th. Be sure to include your full name in the body of the email and “Let It Bleed @ Chapel” in the subject line. We’ll contact you via email if you’re the lucky one!

We also asked Sea Witch’s Lauren Espina to share her thoughts on the event and her ongoing efforts to promote gender equality in the club, the checkout line, and beyond.

The Owl Mag: How did Let It Bleed originate?

Lauren Espina: In December of 2015, about a month after I threw our first show, I was walking through South Park and a homeless woman around my age asked me for change. I opened my backpack to grab my wallet and she saw that I had a box of tampons. She asked me for one, which I thought was odd at first. But it quickly struck me why – having your period is uncomfortable at best and debilitating at worst, but if you take out access to private bathrooms and feminine hygiene products, it’s a health and safety disaster. I’ll never forget the look of embarrassment on her face; the period shame is ingrained in our culture. I gave her the whole box and within seconds she had turned the block. But that interaction really affected me and I knew I wanted to do more.

I’ve always considered myself a feminist, but I had never considered the impact a simple period has on homeless women. I did some research and found out that homeless shelters are always in need of feminine care items because no one wanted to hold tampon drives because “the nature of the products,” according to one community organizer I spoke with. I decided that Sea Witch would fill that gap. The movements to abolish the Tampon Tax and raise awareness for the Homeless Period have seen success over the last couple of years, so coming from a city with a high population of marginalized homeless families, we wanted to do our part as well. Sea Witch quickly evolved from my show and party production company to a platform for social justice.

TOM: How did you select the lineup?

LE: We had several “dream lineups” in mind but I knew I wanted a mix of heavy and groovy. I love curating lineups because I get to put together the shows I want to see. And our Let It Bleed bill is straight up better than anything I dreamed up prior to getting it confirmed. There’s a sweet spot between a cohesive bill and an interesting bill. I want people who have never heard of these bands to remember the difference between each of them when they walk away, but I also want to maintain the energy. It’s going to be loud, infectious, and a lot of damn fun. Bring ear plugs!

TOM: Will Let It Bleed be an ongoing series?

LE: The first Let It Bleed was held on March 3, 2016. It was only the 3rd Sea Witch show I had ever thrown. I pitched the idea to Dan Strachota at Rickshaw Stop, and he immediately got behind it. Dan has been a constant source of support. Not only is he one of the best talent buyers to work with, but he truly cares about social justice and bringing unique shows to Rickshaw. He gave me the go-ahead to throw Let It Bleed and he’s been a great ally ever since. This is the flagship event of Sea Witch. It changed the trajectory of the company. I’ll always be thankful to Dan for taking a chance on it. 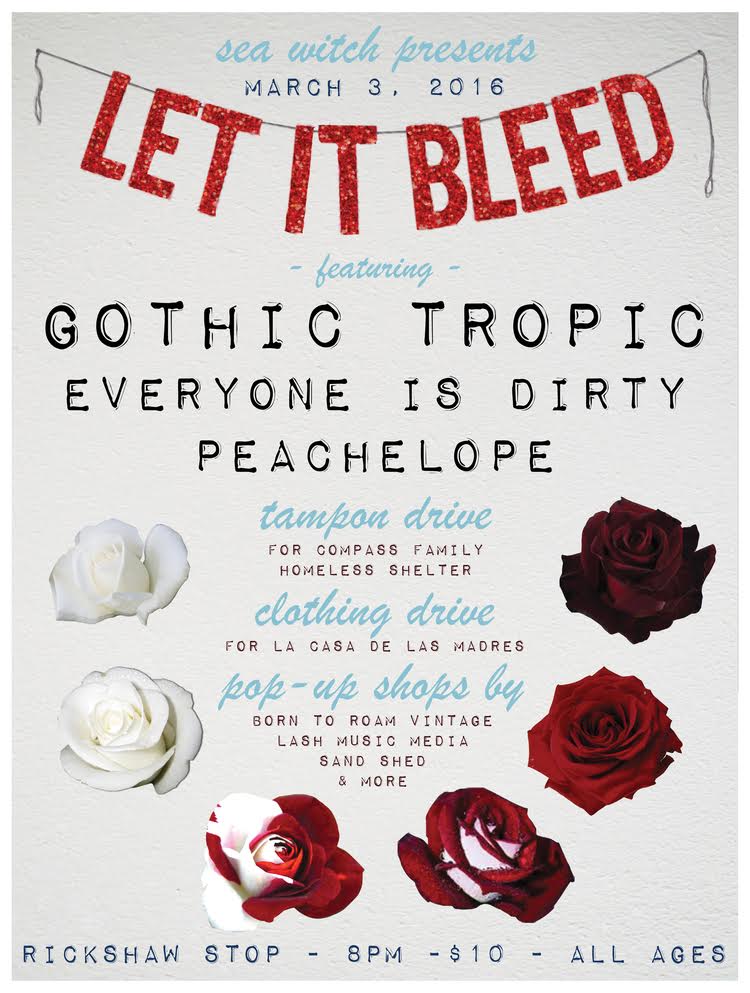 LE: I would love to work with The Coathangers, Bleached, La Luz, Deap Vally, Cherry Glazer, Girlpool, LA Witch and, one day, Angel Olsen, The Kills and Courtney Barnett! I can go on forever. Our wish list is huge!

There are so many social justice issues that I care about, and they’re all interwoven into the messy fabric of the world. Especially in the current political climate, it’s important to give marginalized communities a voice. While women’s rights are at the heart of Sea Witch, women’s rights are human rights – they’re black rights, indigenous rights, POC rights, immigrant rights, refugee rights, LGBTQ rights, disability rights, sex worker rights. The goal for 2017 is to focus on intersectionality and inclusiveness while also building the brand to raise the platform.

I do believe it is important to not spread any message too thin and to pick a couple of things you’re very passionate about and focus on those things. Like everything, we are looking for balance between focus and inclusiveness, our local and global message. We want to work with anyone who truly gives a damn about making a difference in the world no matter what platform they’ve chosen. Teachers have classrooms, lawyers have courtrooms. We have art, poetry, and rock and roll, which I will argue has the farthest-reaching power to change hearts and minds.

Don’t forget to enter to win a pair of free tickets!
You can also purchase tickets to Let It Bleed here.