RIP R.E.M.: Ruminations of the One I Love 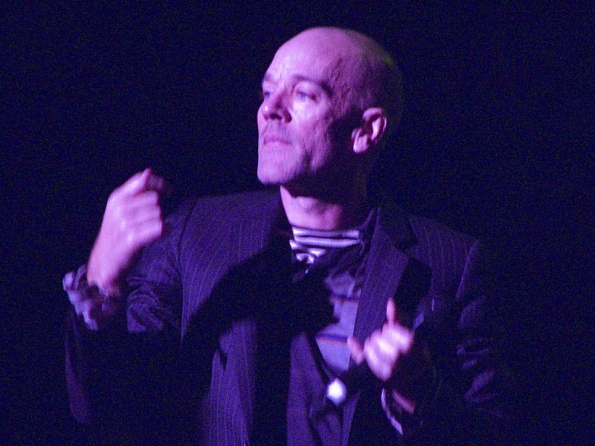 I had just entered my junior year of high school after spending the summer working as a dishwasher/busboy for Mrs. Knott’s Chicken Dinner restaurant in Buena Park, California; a job that was clearly not as glamorous as it sounds. The year was 1992 and my goal was to make enough money to buy a CD player. I had a tape player and a record player, which my father described as the truest sound possible, but I wanted to join the CD revolution. I saved up that summer all the money my parents wouldn’t confiscate for “college” and making $4.25 an hour wasn’t easy, but I did it.

I walked into Circuit City, a now defunct retailer, in late October with my $125 and bought the one that I felt suited me best. The problem was, I still didn’t own a CD and Circuit City jacked up their CD prices to such an exorbitant level that I refused to buy one there. So, my dad and I took a trip to Tempo Records and I bought my first CD, Automatic For The People by R.E.M. Thus began my musical love affair with R.E.M. That affair ended September 21, 2011. I was late to the R.E.M. bandwagon, but once I got on I never jumped off, until now.

I often speak of a band’s Orson Welles moment or their greatest achievement being the earliest thing they do. This was R.E.M.’s eighth album, nowhere near their earliest, but it was the first one I bought. Of course, I’d heard their music all over the radio on KROQ, but this was the clean, crisp sound of the Compact Disc. It flowed from beginning to end without having to flip it over after side one. It went from “Driver” to “Find The River” fluidly and the sheer beauty of Michael Stipe’s voice astounded me. You could hear the pain when he told an awkward teenager just entering a new high school that it’s okay, “Everybody Hurts.”

The teenage years of a human can be the absolute worst. I hated them so vigorously that even now, as The Owl Mag asks us to relive them with pictures mocking ourselves, I steadfastly refuse. I was so awkward, so uncomfortable in my own skin, that I didn’t know which clique to associate with.

There were all the Breakfast Club stereotypes and I tried to assimilate myself into each one. I meandered, like a Koala high on eucalyptus, from one to the other, never really finding my niche. Hip-hop was the preferred music of the predominantly Hispanic high school that I attended the final two years of my teens. I love hip-hop mainly because it was so forced upon me in those years, but at that point I couldn’t relate to it whatsoever.

What I could relate to was a college rock (the precursory name for indie rock) band from Athens, Georgia that dealt with the morality and struggles of life in a nonreligious, non-preachy way. I realized, in fact, that everybody does hurt. There was a comforting melancholy about the album that provided relief for someone who didn’t fit in anywhere. The lush orchestration under the heavy Peter Buck electric guitar on “Drive” or the simplicity of the aforementioned “Everybody Hurts” threw me for a loop. I watched Andy Kaufman as a kid, but it wasn’t until “Man on the Moon” that I felt I understood what he was all about.

R.E.M.’s library was something I felt I had to delve into. I got another job at Carl’s Jr. working the drive-through with the express purpose of using whatever money I made for gas, girls, and music. Getting girls was a little harder to come by at that point in my life, mainly because all I could talk about was music and sports. I really haven’t changed that much. I’m just better at bullshitting my way through conversations.

I dove head first into the I.R.S. years and listened to Stipe speak to me as if he knew my plight of awkwardness and feelings of inadequacy. None of my friends liked R.E.M., but I remained a loyal follower. Even to this day I have discussions about how influential they were and their relevancy is called into question by musical neophytes. Like: Where would the Decemberists be without R.E.M.?

How could they not see what I felt was so evident? How could they not notice Michael Stipe’s brilliance? Were they not hearing what I was hearing? “I mean, listen to him… he sings every note with such purpose,” I would emphatically exclaim to them when listening in the white van I drove; a van that probably fit better on a Chris Hanson show than a kid driving around town.

We’d have conversations about songs like “Don’t Go Back to Rockville,” the song that’s only ambiguous if you’re a teenager. The lyrics speak of losing a love, then turn into a plea to stay with him, and become the empty threats that he doesn’t really need the other person. It would be to their benefit to stick around and it all sounded so familiar.

When I graduated high school I found friends who had the same feelings about music that I did. We reveled in the grunge sounds of the day, we were astounded by the resurgence of punk rock and we cried when Kurt Cobain killed himself. Through all of that, R.E.M. was there. R.E.M. always reminded me, for some reason, of a monologue from Field of Dreams spoken by James Earl Jones. I have taken liberties with the writing and changed it to fit my point:

The one constant through all the years, Ray, has been R.E.M. America has rolled by like an army of steamrollers. It has been erased like a blackboard, rebuilt, and erased again. But R.E.M. has marked the time. This music, this band: it’s a part of our past, Ray. It reminds us of all that once was good and could be again.

Perhaps, that’s a bit hyperbolic, but you get my point. For the past thirty years R.E.M. has been there like a security blanket, a trusty friend that you don’t speak to as often as you wish, but know they’ll be there when you need them. People listened, oh Ray, they most definitely listened. They felt and they danced like crazy wild-armed banshees. They joyously stomped with Michael Stipe as he punctuated his affectations with gesticulations almost involuntarily. We listened to their last album, Collapse Into Now, and knew that after a few years of harder experimentation they were back to what made them great.

They knew it too and that’s why they’re walking away on top, so to speak. They didn’t want to be the Rolling Stones phoning it in for years to come. They didn’t want to be Willie Mays falling down in the Mets outfield. They gave thirty years of their lives to us. Thirty years of brilliance and now they’re done, but their music isn’t. For thirty years we listened to their auspicious sounds, taking for granted that they’d be there forever, neglecting their relevance and almost forgetting that they were still together.

Then they broke up and we remembered. We became aware again and were saddened that our friends were no longer going to be there when we needed them to be. R.E.M. has left this musical mortal coil and we are all better off for having experienced those four young men from Athens, Georgia.