Outside Lands‘ seventh year sold out in seven days, which caused us to worry that our beloved Bay Area festie had reached the tipping point where saying “I was THERE, man!” becomes more important than who was performing. There were many crushing scheduling conflicts, and by 3pm each day we had to choose between seeing an act or listening to an act from afar while waiting for a port-o-potty/vegan pizza/donut cheeseburger. Still, Golden Gate Park’s biggest party yielded plenty of glorious moments where it counts: live music, comfort food, and camaraderie. As we head back into a world where beer and bacon are not basic food groups and no one is offered LSD on their way to the bathroom, here are our Nest’s favorite moments from Saturday.

6. Atmosphere.
Somewhat surprisingly, Minneapolis’ finest filled Sutro field to bursting and rewarded everyone disillusioned by “MAKE SOME CIRCLES!” (you know what we’re talking about there Friday Kanye-goers) with a solid hour of no-nonsense hip-hop. “Dirty Girl” from Felt 2 and Sad Clown Bad Summer 9’s classic opening track were among the many pleasant surprises these long-running indie rap heroes had to offer.

5. “Jamie Marie” by Christopher Owens.
We miss Girls so much! As San Franciscans, they were our band. Owens held us over and provided hope when he played the standout heart breaker “Jamie Marie” from his former band’s excellent record Father, Son, And the Holy Ghost. As he finished, he made eye contact with his back-up singer who mouthed the words, “that was beautiful.” Indeed it was Chris, indeed it was.

4. “Let Me Go” by Haim.
We were interested to see the level of enthusiasm the Haim sisters gave their set.  At this point they’ve been touring the Days Are Gone material for almost three years, so it has to be tough to bring it every night. The girls are pros and they’ve stretched out their material and made it more jammy, which suits not only their style, but the festival atmosphere as well. We thought they were the best act of last year’s Treasure Island Festival. Fast forward nine months and Alana and Danielle looked a little weary, but oldest sister Este worked the stage like a force of nature (that epic bass face, guys), willing them through. “Let Me Go” had all three going crazy on the drums, working in unison the way only family can.

3. Tom Petty And The Heartbreakers.
As Outside Lands’ first repeat headliners ever, we felt they were a very well-deserved choice. Spirits flagged during Hypnotic Eye material, but the “play the hits” sections warmed Land’s End better than any $50 festival blanket.

2. “Barbara Streisand” by Duck Sauce.
Were super producers A-Trak and Armand Van Helden laughing at us or laughing with us? The duo were all smiles and jokes as they hung out and danced in front of their 20-foot-high rubber ducky. It looked way too easy and inspired multiple “I can do this shit, these guys are making so much money” comments from the crowd. If Disclosure had the place at a 9 for “Latch,” Duck Sauce’s goofiness and carefree vibe took the crowd to a 10 for sure. The entire Twin Peaks area was bouncing in furious unison as the guys planned their bass drops to absolute perfection. 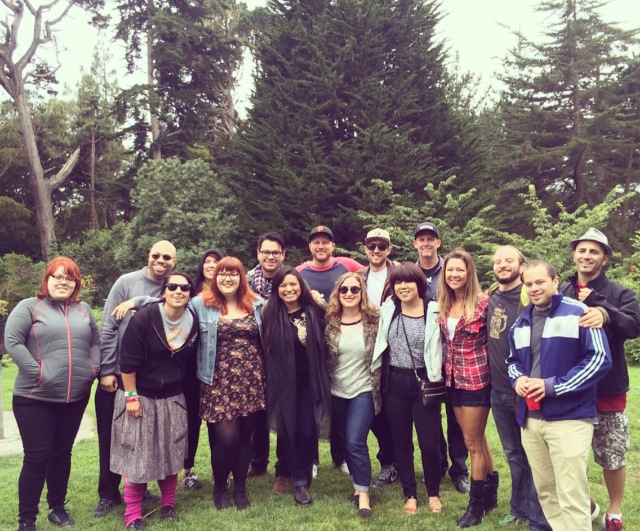 1. The annual Owl Mag meet-up.
Saturday of Outside Lands weekend always holds a special place in our hearts because of the annual Owl Mag pre-game meet-up at Golden Gate Park’s Stow Lake Boat House. Over a dozen of your friendly neighborhood contributors doled out world class hugs and mimosas as we geeked out over festival highlights past and future. This touching ode to togetherness sums our Nest, and the festival as a whole, best.

HONORABLE MENTIONS
Valerie June’s gas can guitar, Big Freedia twerking her way up a ladder in her SECOND performance of the day, Jagwar Ma‘s sweat-inducing dance party, and Death Cab For Cutie for making us sob (as per usual).

Be sure to check out all of  Saturday’s pictures HERE.

Friday’s review can be found HERE and Sunday’s is right HERE.