On the Deck with Kevin Wan: Sophia’s Thai Kitchen, Davis 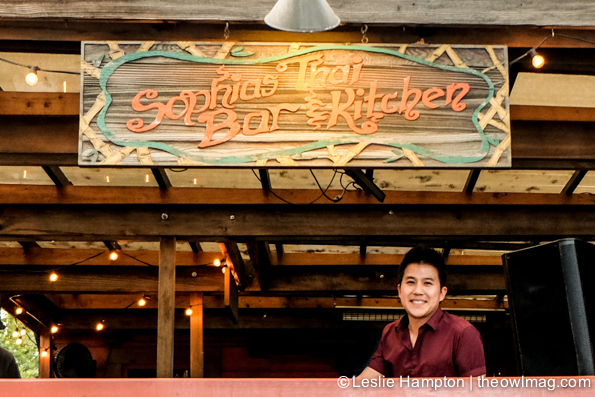 If you ask anyone in the Davis or Sacramento area about Kevin Wan of Sophia’s Thai Kitchen in Davis, the response you’ll inevitably get will be about his easy-going hospitable nature followed by an exclamation of wonderment regarding the magic he wields when it comes to booking amazing music talent. Though the tiny college town of Davis isn’t a musical hub like its Bay Area counterpart down Interstate 80, Sophia’s has built a reputation for itself as a favorite West Coast stop for touring bands and a must-play venue for up-and-comers. Kevin began booking bands in earnest in 2006 but admits, “never in my wildest imagination did I think we could evolve into an actual show space on our little deck.” 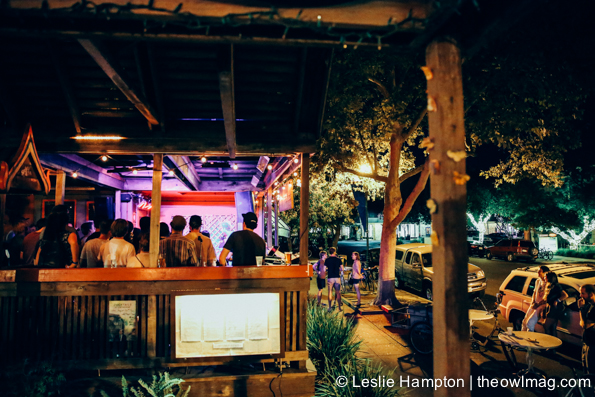 Nestled on a tree-lined street in downtown Davis, Sophia’s houses the bar and venue space on the street front and restaurant space in the back. From mid-April through mid-October during music season at Sophia’s, if you stroll along the sidewalk anytime past 9 o’clock in the evening, expect to see a deck packed with an eclectic mixture of college students and Davis locals. Though it looks like nothing more than a front deck at your parents’ house, the Sophia’s deck can pack ‘em in. “We could probably squeeze in about 100 people, depending upon how large the band is. If we get a band like Typhoon or Mother Flacon who have like 14 people in their band, it’s obviously going to be less,” explains Kevin. Sophia’s has in fact played host to both Typhoon and Mother Falcon along with many other impressive names, both up-and-coming and well-established touring bands, like Gardens & Villa, Generationals, The Lumineers, Lord Huron, and The Head and the Heart. 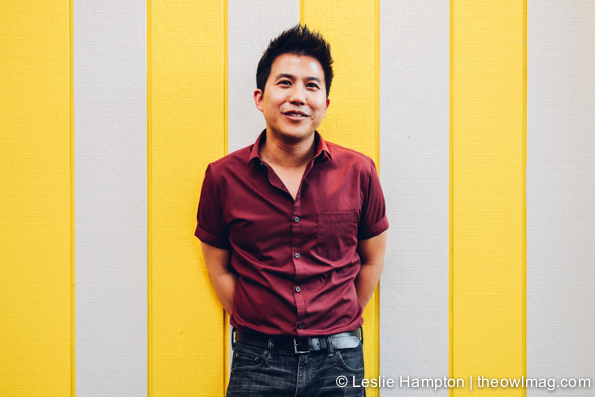 For a small venue in a small town, Kevin has managed to consistently curate stellar music seasons year after year, “Curate…people like to use that word,” he observes. “I’d say, we’ve been really lucky to have bands who want to play here. But I guess curate is accurate because probably 90% of the bands who play here are bands that I invite out.” A combination of three key external elements play into Kevin’s booking success: timing, location, and market. 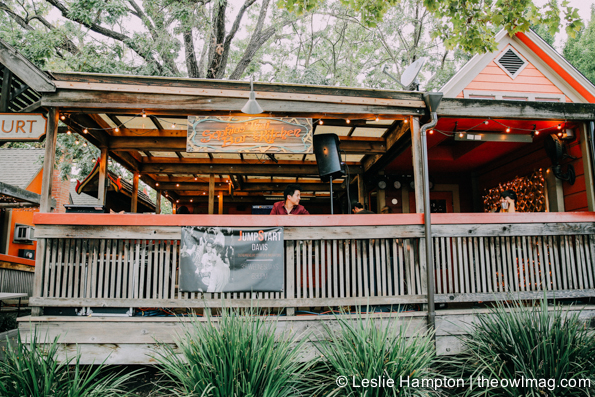 Sophia’s music season perfectly bookends festival season on the West Coast. Beginning with Coachella in April and ending with Treasure Island Music Festival in October, he’s been able to take advantage of bands passing through Davis’ obscure location during those six months. “A lot of times, bands will book around their festival schedule and in California there aren’t a lot of places outside of the radius of those festivals that they are allowed to play so we really benefit from that,” he explains. “Bands are really willing to under-play, by under-play I mean willing to play smaller venues, because we are located outside of that radius.” 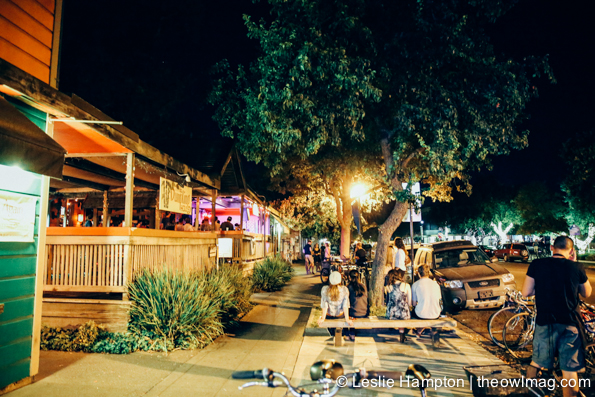 The small venue market is another important ingredient in the magic Kevin wields at his fingertips. Though Sacramento is only a short 15 minute drive to the east, the small venue market for touring bands is virtually non-existent in the City of Trees. “There aren’t a lot of places in Sacramento who are booking bands at this level – you have Ace of Spades and Harlow’s – and then a lot of venues that have come and gone like Bows & Arrows and Luigi’s. I think those were the two spaces that were comparable [to Sophia’s] but weren’t able to make it unfortunately, because honestly, it’s hard to make money.” Fortunately for Kevin, the success of Sophia’s bar and restaurant alone are enough to sustain his business, a luxury that allows him to focus on bringing in bands, paying them, and putting on a good show without having to worry about turning a profit or breaking even. “People don’t do this for money, at least at the small venue level. They do it because they are passionate about it,” and this passion and good fortune have granted Kevin the freedom to cater to his community’s taste by bringing in as many different types of artists as possible. But Kevin is just as dependent upon the community to show up and support as they are on him to book notable indie names at Sophia’s, a relationship that is easily taken for granted. “I think people always think Sophia’s is going to be here, that we’re always going to be doing shows – I think people thought that about Bows & Arrows and Luigi’s – but it’s important to show up, clap, and buy a drink.”

Though these three external factors undoubtedly play a role in Sophia’s success, Kevin’s hard work and attitude are the X-factors that sustain Sophia’s success. The term “tastemaker” can often leave an unpleasant…taste in one’s mouth because of its snooty connotation. I’ve seen Kevin cringe many times when being labelled as such, but no other word more aptly defines his role in the small venue music community. He has impeccable taste and an ear for buzz worthy bands which he puts to good use when he’s researching bands on various LA, Portland, or Seattle-based blogs. (He’s currently listening to You Won’t, NRVS LVRS, Mimicking Birds, and Lady Lamb.) But Kevin would be the first to tell you that it’s really a group effort when it comes to booking bands, “A lot of times its keeping my ear to the ground but I also have built a lot of relationships with bookers in LA and San Diego. We talk a lot about bands we like and help each other out.” 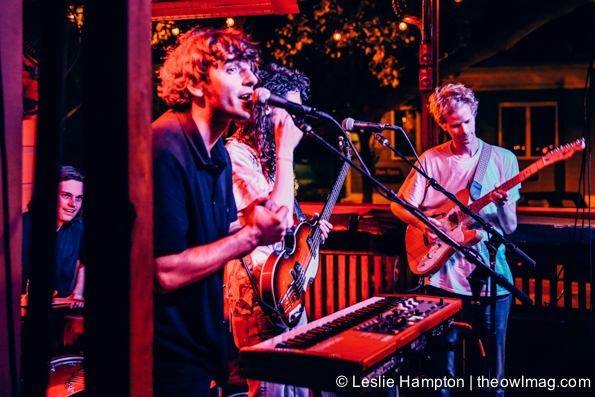 Venues like San Francisco’s Bottom of the Hill and the Crepe Place in Santa Cruz are usually on the same tour circuit as Sophia’s but the deck possesses an unmistakeable welcoming house show vibe that it totally unique to the space. While the deck does tend to dictate that vibe, Kevin’s laid-back attitude and background in the restaurant and hospitality business perpetuate that feeling of welcomeness. Seeing a band sitting down in the restaurant space of Sophia’s to eat a pre-show meal among Kevin’s regular customers is not an uncommon sight. “We always say, what we lack in space and stage production, we make up for in hospitality,” he jokes, “Which I think is why we are able to get the bands we do. I want the band’s experience to be just as positive as the customers’ experience or the show goers’ experience.” Kevin continues, “I treat a band like a customer because I feel like they are doing me a favor playing a show here so I want them to walk away with a positive experience. It’s a weird space so in order to make bands feel more comfortable in a weird space you treat them well, feed them a meal, be chill with them, and be present.” On the evening I spoke with Kevin, Ducktails was headlining on the deck. On this tour, Ducktails played venues that were four times the size as Sophia’s but as Kevin opines, “I think we’ve developed a reputation as a good stop on the tour.” I think so too.

Check out the rest of Sophia’s music season here. Most shows are $5 at the door, so it’s a low risk high reward endeavor. Sophia’s Thai Kitchen is located at 129 E Street in Davis, California.