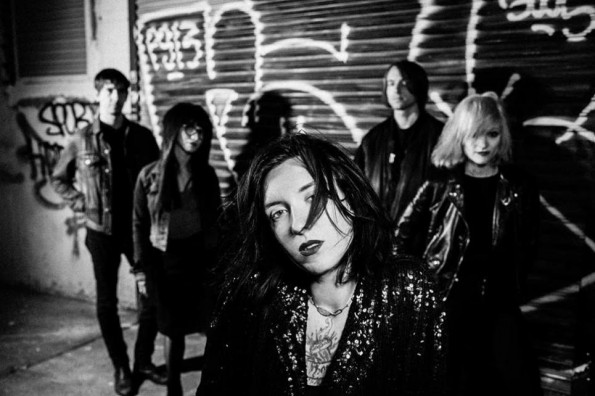 Still riding high on last year’s American Tragic, Hether Fortune is revving the engine on the Wax Idols touring machine for another year, starting with a Noise Pop headline appearance Saturday night (27th) at The Knockout. In mid-March, the band will take part in Force Field PR’s 10th anniversary celebration in LA. A West Coast tour with Hunny follows, including dates in San Diego, Santa Ana, Portland, and Seattle, setting the table for an appearance at the Treefort Fest in Boise. The action doesn’t let up, with a date at the Troubadour in LA in late April, followed by a return to home turf, with a special night at the Oakland Opera House, with the band supporting Modern English.

With drummer Rachel Travers still in the fold, and OG member Keven Tecon (Vaniish) making touring appearances from time-to-time, Fortune welcomes two new members, bassist Marisa Prietto and guitarist Peter Wallner. Road-tested on the initial LP release tour, it’s all systems go. On the cusp of the album coming out, we talked with Hether and Peter a while back in LA and got the lowdown on the new lineup…

HETHER FORTUNE: “The new kids…(chuckles)…we’ve got Peter Wallner, whose basically the new 2nd guitarist, taking the pressure off of me, so I can sing now, and be more in the front…”

PETER WALLNER: “I was playing in another band, (Some Ember), and about a year ago, Hether asked if I was interested in playing in her band.

HF: Peter, yeah, he was playing with Some Ember, at the Knockout, I remember…”

HF: “…It was at the Knockout, after a show, all makeup running and sweating, and Peter and Dylan came up and said ‘we love your band’, and when the time came, Peter was my first and only choice when it came to replacing Jen…”

HF: “and (new bassist) Marisa…It was a perfect storm when Amy…got an incredible new job, had to learn Spanish and go back to school…it was really sad, I didn’t want to replace Amy, but I found Marisa and really lucked out.”

HF: “Definitely…she’s an instrumentalist and singer, from LA. She’s a fast learner, enthusiastic, and really cool.”

And there you have it, the new foundation of the ever-evolving Wax Idols, hitting the road with a vengeance. Don’t miss out!