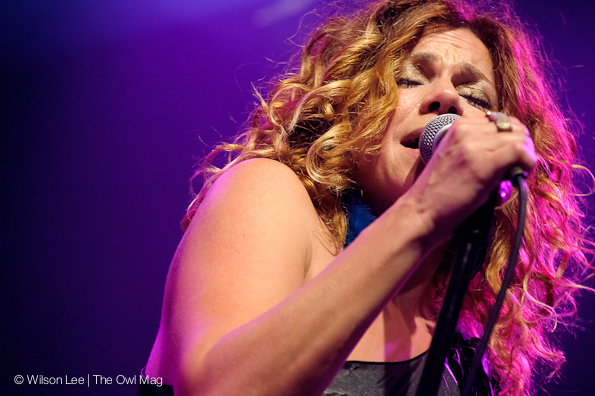 At age 5 she was harmonizing with the iconic Don Ho, at age nine she was on the White House lawn singing alongside Ol’ Blue Eyes himself. Born in Tokyo, Japan because her mother snuck her on the plane to be with her father during the Tokyo Music Festival, Nikka Costa was brought into this world for one purpose and one purpose alone… to funk it up. With her new EP, Pro*Whoa, just released on June 21 to her own imprint GoFunkYourself Records, and a slew of supporting summer tour dates – we had a few moments to exchange thoughts as her second stop on the itinerary brought her to our lovely City by the Bay. 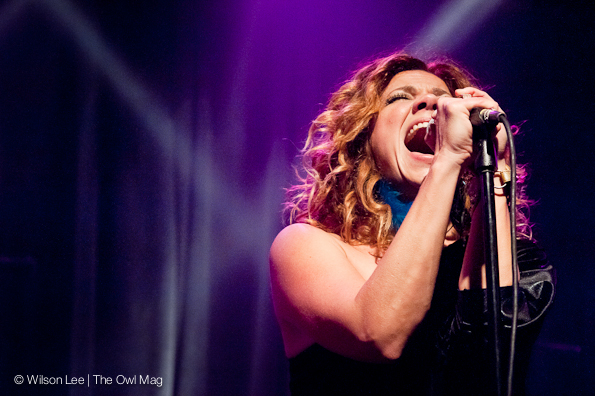 Nikka: I’m kind of worn out. Between today and a gig and then driving tomorrow and a gig.

The Owl Mag: You’re just getting started on the tour?

Nikka: Pretty much. We did Las Vegas last weekend. Four shows in Vegas. Four back to back – two shows a night. It was kind of bizarre, but fun.

The Owl Mag: Good crowd out there?

Nikka: So it’s like being your own cover band, of songs they don’t know. Of covers they’ve never heard. But it was good rehearsal.

The Owl Mag: So, what’s your favorite thing to do in San Francisco?

Nikka: Well, I landed, I ate at…um… my friend took me to a really great spot called… something Bs…Bs…St. B… shit…I can’t remember now. I’s like a Vietnamese, kind of really healthy, yummy, anyway. Darn, I wish I could tell you cause it was really good.

The Owl Mag: But it was Vietnamese?

Nikka: It was Vietnamese with a twist of health.

The Owl Mag: Where was it?

The Owl Mag: So I guess you never lived in the Bay Area?

The Owl Mag: You were born in Tokyo. Crazy. How did that happen?

Nikka: My dad was doing the Tokyo music festival. And my mom was pregnant and basically lied to the airline and said, “I’m only five months pregnant.” so she could fly. But she was really nine months pregnant and so she went over there to be with him. So I was born there, and had to stay there until I was three months old to fly. 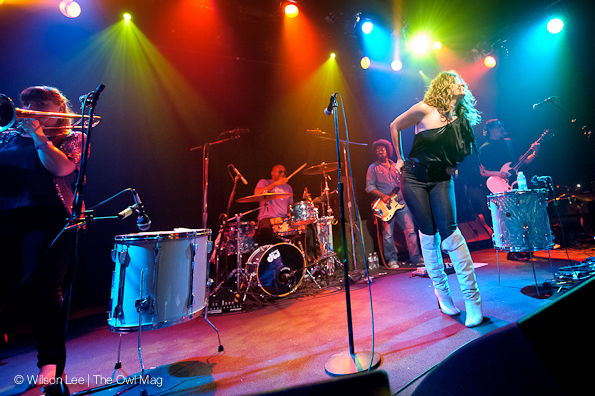 The Owl Mag: So do you come to the Bay a lot?

Nikka: Only when we’re playing.

The Owl Mag: And you have a baby girl?

The Owl Mag: Is she a little entertainer?

Nikka: Um, y’know, she definitely goes into that space.

Nikka: Um, yeah. We toured with Pink last summer and those were kind of festival shows. And they were kind of early, 7:00 o’clock , y’know, cause they are kind of all day shows, like outdoor shows. So she was there and she’s seen me. She watches and takes whatever in. And then she just goes and does her own thing.

The Owl Mag: Is she you’re only? 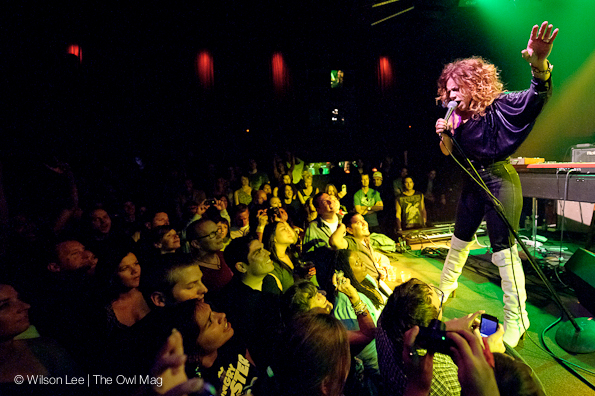 The Owl Mag: So you were on the Fun House Summer Carnival Tour with Pink?

Nikka: We weren’t in the US. We were in Europe.

The Owl Mag: So how do you feel about this whole festival revolution? Have you noticed the shift in that direction?

Nikka: Not really. I didn’t notice it as a trend. But maybe it is.

The Owl Mag: For example, you’ve got Coachella, Outside Lands, Lollapalooza, and Sasquatch. Just to name a few.

Nikka: Well I guess as a music lover it’s kind of cool. Because you buy a ticket and then you have a full kind of experience. And you get to see bands maybe you wouldn’t have time to go check out solely for them. I guess there are good things about it. And then playing festivals is really fun because as a musician you get to see people you wouldn’t have time to go out to clubs to see. But um, at the same time, you’re at the mercy of the festival and the vibe that the festival creates and so you can’t really… it’s not you’re night. Y’know, as a performer. 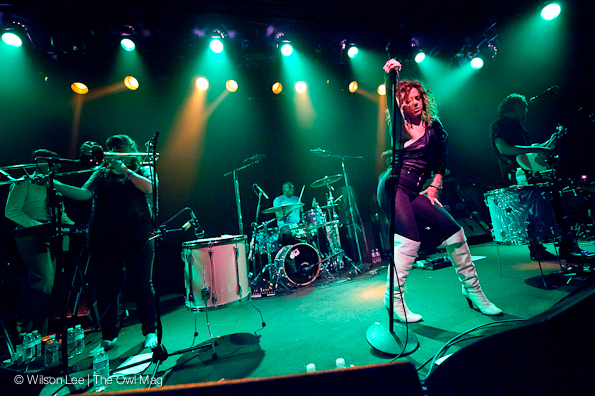 The Owl Mag: Are you playing any festivals this summer?

Nikka: Am I doing any festivals this summer? Um, I don’t think so. The album is newly released. Just came out yesterday. So you have to be a little bit earlier released to be booked on the festivals. So, yeah, next year.

The Owl Mag: So the new EP Pro*Whoa which I’ve been listening to for the past week, there’s a pretty big departure. A big shift in your sound. From that raw funk-soul to a more pop produced sound.

Nikka: Well I think the record before this one, Pebble to the Pearl, was definitely very vintage. No samples. I mean, there were synthesizers, but everything was old school. We did it all in one room. It was very like…vintage… organic. And that was kind of on purpose. Because I really wanted to make a record like that. But I didn’t want to make that record again because I loved that record. And I didn’t want to make its little stepsister. I think this one is a bit more like my earlier stuff. A bit more like Everybody Got Their Something in a way like where it’s more MPC based and more beat driven and more samples and stuff like that. It’s still got the funk, but it’s a little bit more like a combo, like electronics, modernized. Kind of so.

The Owl Mag: So you’ve lived all over the world. Where do you consider home?

Nikka: Uh, LA, because that’s where we reside. But when I go back to Sydney I definitely feel like I live there too. I know it so well. I lived there for five years so it really feels like home.

The Owl Mag: So how’d you learn all those mic tricks? Is that just something you’ve been doing since you were a little kid?

Nikka: Um, y’know, I don’t do it so much anymore cause its so nerve-wracking.

The Owl Mag: In case you miss?

Nikka: Yeah, that’s really bad luck when you drop it. I just practiced it with someone – he’s like a dancer but he was just really amazing at it. He kind of studied it and was the best at it and like figured out different things that we could do with it and I trained with him. Especially for the feather video we had like a whole thing. And for the Chris Rock show, when I did it that was totally nerve wracking. Oh my god, so scary. But I like to be kind of free on stage. 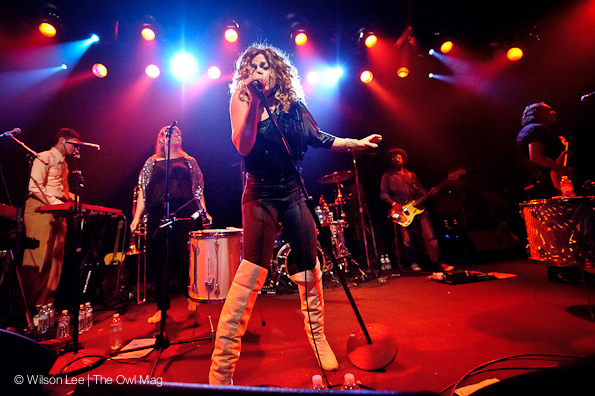 The Owl Mag: Are we going to see some of it tonight? Is there a name for it?

The Owl Mag: Are we going to see some of it?

The Owl Mag: Aside from music, what else moves you?

Nikka: I love to cook. I’m a bit of a foodie. And I love, I love collecting clothing.

The Owl Mag: In other words shopping?

The Owl Mag: And, of course, your baby right?

The Owl Mag: So what’s the worst food that you’ve had on tour?

Nikka: The worst food that I’ve had on tour? Usually when you’re traveling across middle America and there is not anything but fried everything. Fried salad. You know I have to fit into my spandex tights. So I can’t eat fried salad.