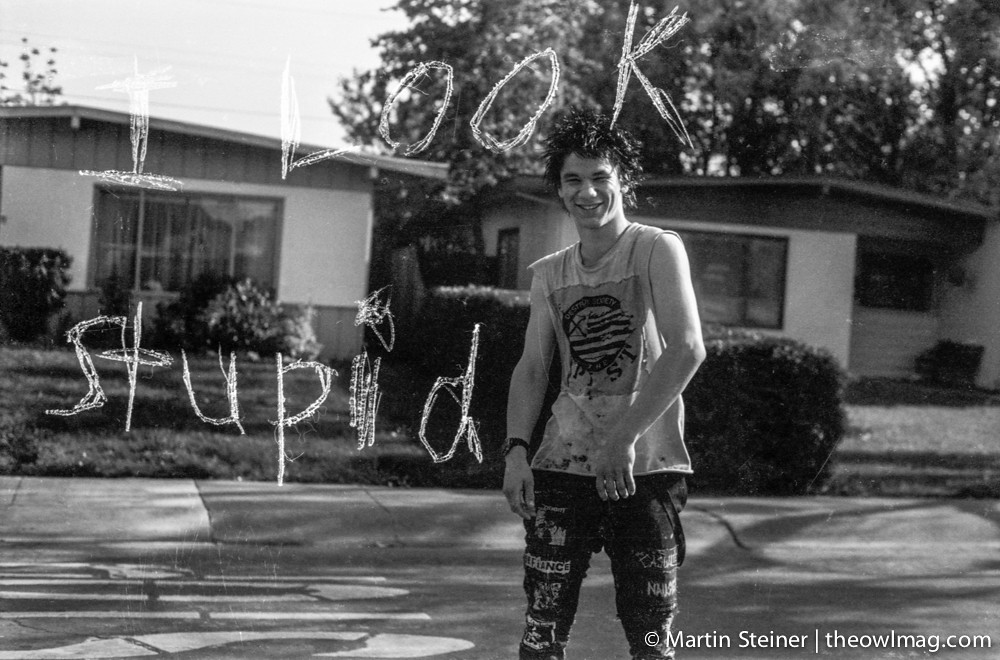 Meet the newest photographer to The Owl Mag nest, Matthew Kadi. He is a Bay Area photographer and the drummer of Monster Squad and Great Apes. This month he released a zine documenting some of the best of his early photography work as a young punk. We spoke to him about his journey as a photographer, the intersection of photography and music, and Monster Squad’s 20 year anniversary show later this month.

The Owl Mag: How did photography become part of your life? What were your first experiences?

Matthew Kadi: I was typically the sketch-book kid in school, always walking around with my drawings. Around 10th grade, I kept finding myself not into the work I was creating with pen/paper so I decided to try a photography class my junior year. My family only had one point and shoot camera that I can recall. I remember being at the beach with my family and my Mom dropped the camera among a bunch of giant rocks, there went our childhood remembrance tool.

Since my family did not have a camera or any photography experience, my great-grandma Dorothy opted to give me her Canon AE-1 that she purchased in the late 70’s/early 80’s. Many of my family’s photos were taken with this camera so it was extra special to me. I was able to sign up for a photo class and get to work using this camera. I got hooked right away, taking the 2 or 3 classes that Vacaville High School offered. My film would be on the reel and developing tank before the bell rang for class to start.

Class started with the oatmeal can pinhole camera. Mr. Ray was a solid teacher whom I hold in high regard for pushing me and giving me extra confidence as a young photographer. The camera concept clicked pretty fast, but the flash was a different story — it still is to me. Natural light has always been my favorite. 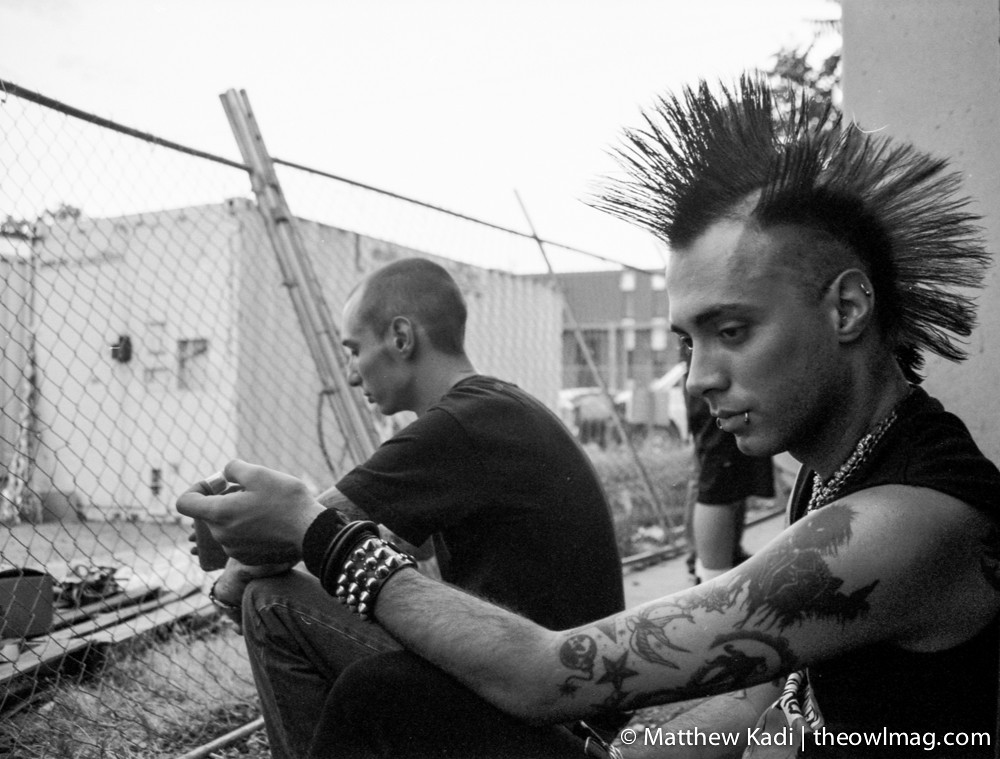 TOM: You’re very involved in photography and music. How did those two worlds come together? Did one start before the other or was it a simultaneous beginning?

MK: Music came first when I got my drum set at age 10 while living on Treasure Island. I started playing in Monster Squad in January of 1997. The worlds work great together in that each offers its own creative satisfaction. I really enjoyed documenting us being teenagers as well. Looking back, I feel like I didn’t shoot enough, or that my first instinct when leaving the house was not always to grab my camera. I’d see shows with friends as often as someone would drive us out of town, or at our local Three Oaks Community Center, where a ton of bands came through in the late 90’s. I shot a lot of Papa Roach shows back then which was good practice for getting into weird spots, or knowing when something cool might happen, because I’d seen the band play so many times that I knew what to expect. Shooting the same band so often did teach me to stay on my toes for the unexpected and get creative with your location. I’d get in the crowd where it was really rowdy and risk getting stage dived on. It was worth it to me.

I also cherish some of the first Gilman shows I photographed. Some of those bands are now selling out arenas or no longer together. I also really love looking at older live shots and seeing no cell phones in the air. 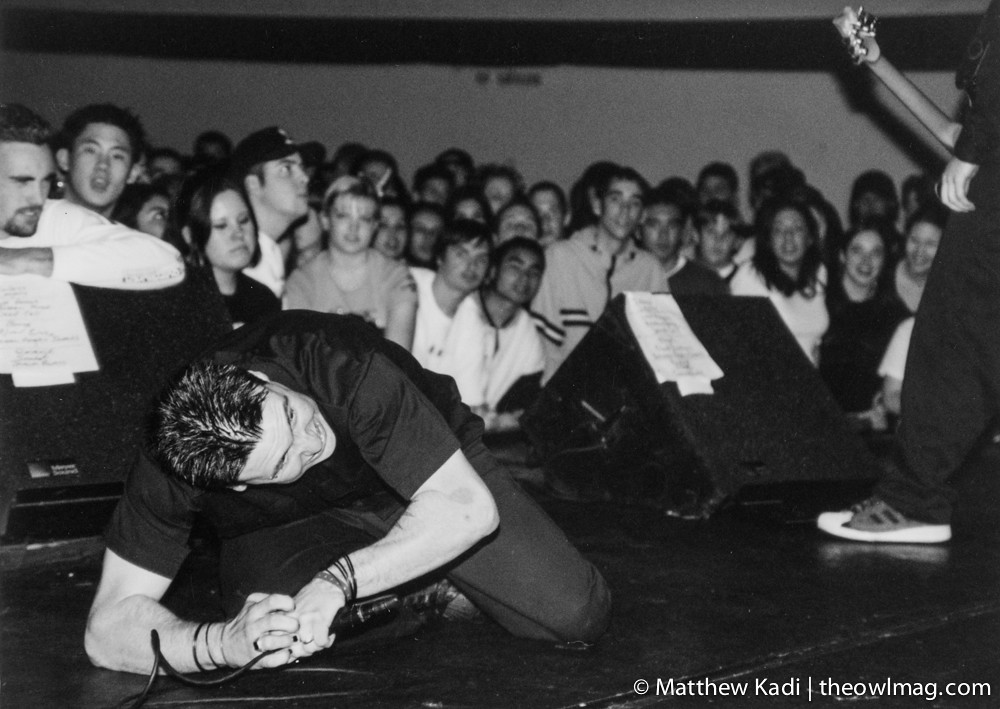 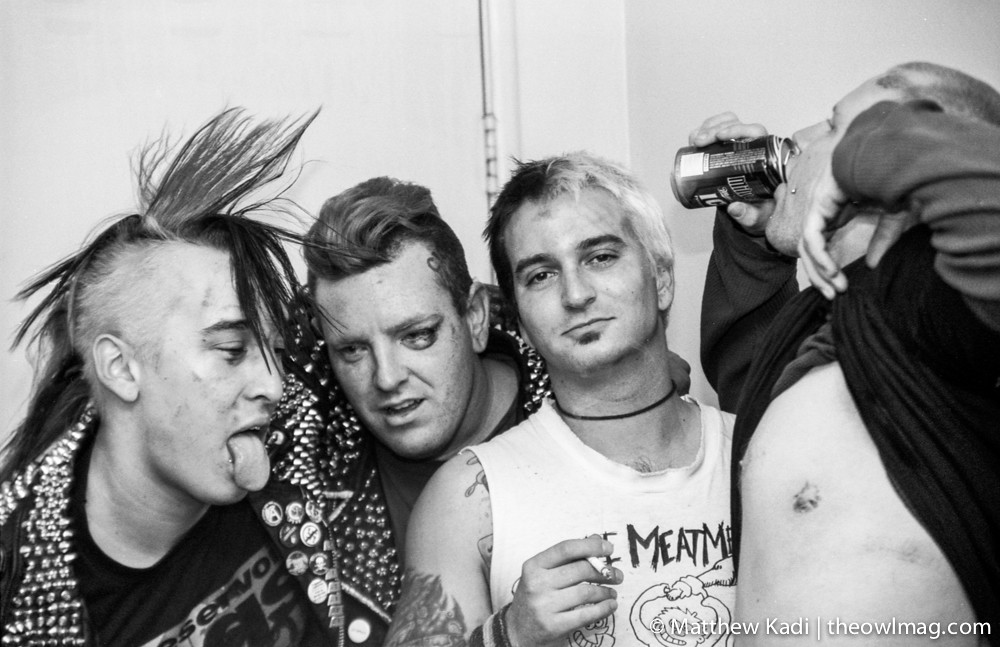 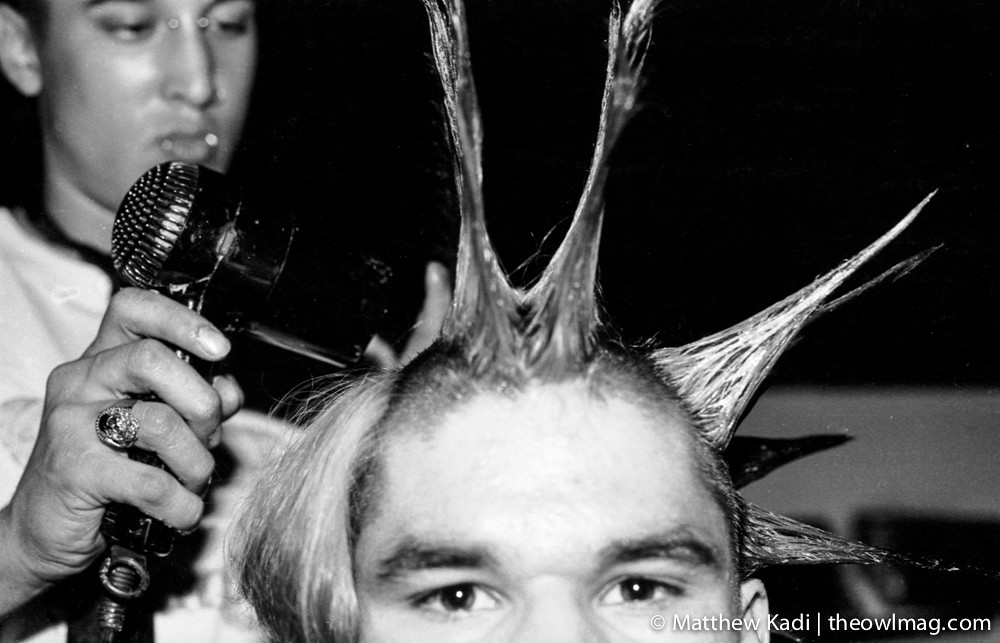 TOM: What is your process of shooting film versus digital? If you hadn’t started shooting film first, do you think you would be a different kind of photographer?

MK: Well, it was 1998 so starting on film is to be expected. I actually made fun of digital photography in class and Mr. Ray looked right at me in front of the class and said “You of all people, Mr. Kadi, should shut up!” because he knew this was where photography was going. Around 2003 after the band started touring the U.S., I’d be coming home with 25 rolls of film all and was a little relieved and eager to try something new.

Once things clicked I began to grow as a photographer, but it wasn’t until about 2011 or so that my interest in photography started to grow more and more. I was always casually shooting in the interim, but I was really itching to expand my skill level and document the life around me in San Francisco at that time. Through the help of some photographer friends and their suggestions, I pennied up to get a better Canon digital, and shortly after I became a Fuji guy. The X100S took over my life and made me feel like I was shooting film all over again. At that point, I really felt like I had been missing out all these years when I was not shooting film — it kinda bummed me out.

In late 2014, I picked up an Olympus Trip 35 for $5 in Grass Valley. Shot my first roll since 2003, took it in to get developed at Looking Glass Photo in Berkeley, fortuitously swooped up another camera, and my film obsession came back. Since then, I’ve mainly shot film with a variety of cameras. I love the suspense of not knowing what the images will look like. There’s something about the uncertainty that drives me to try harder and really be sure. My emotional stock is more in film than digital. So to answer the question…. yes I feel like I’d be a way different photographer had I started on digital. Not better or worse, just different. 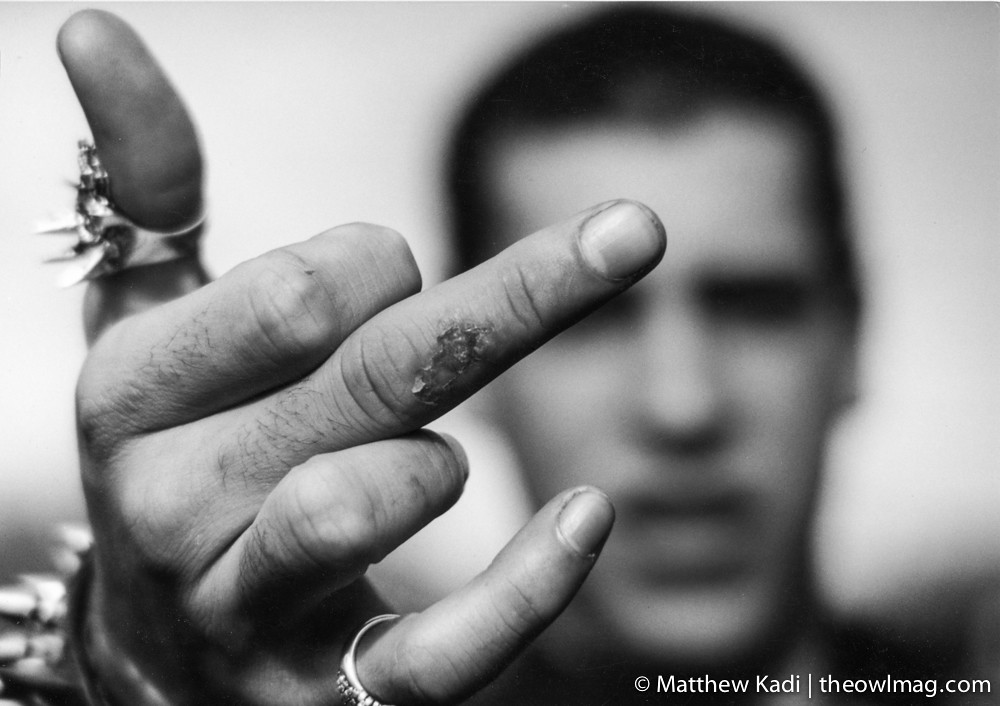 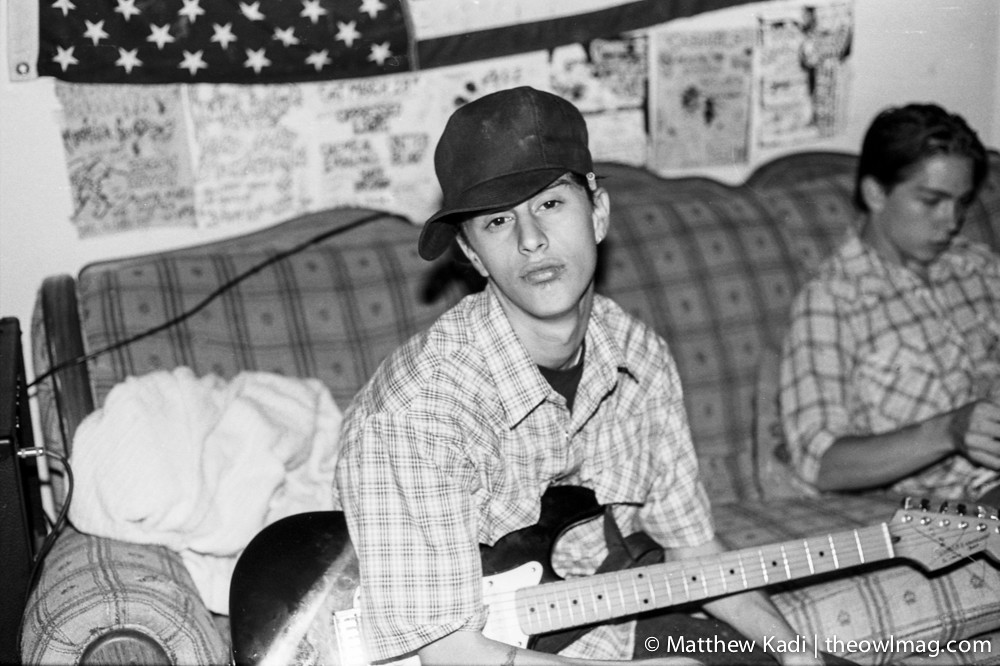 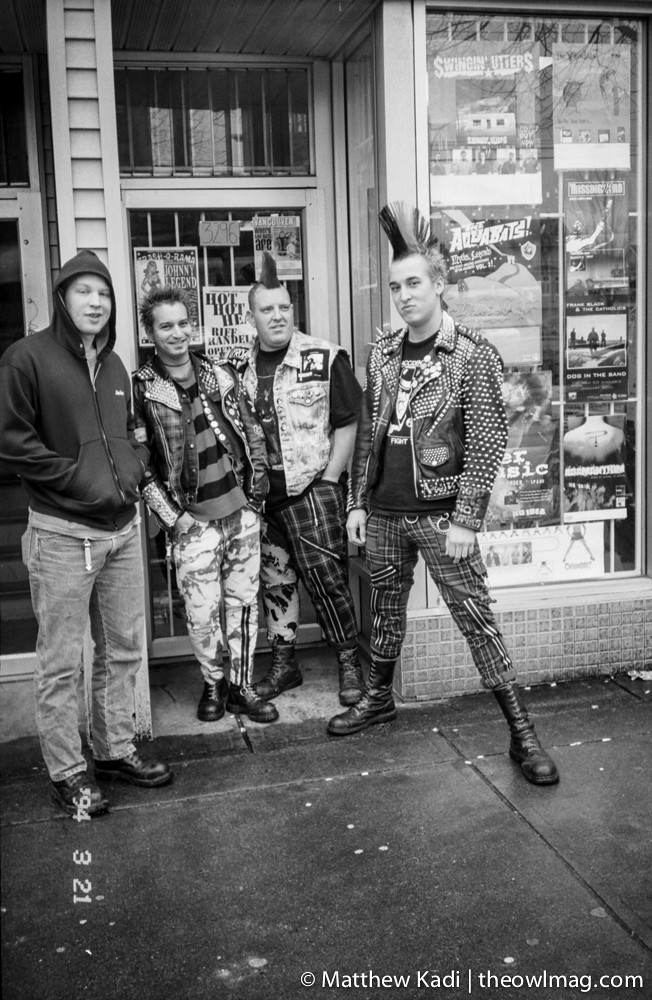 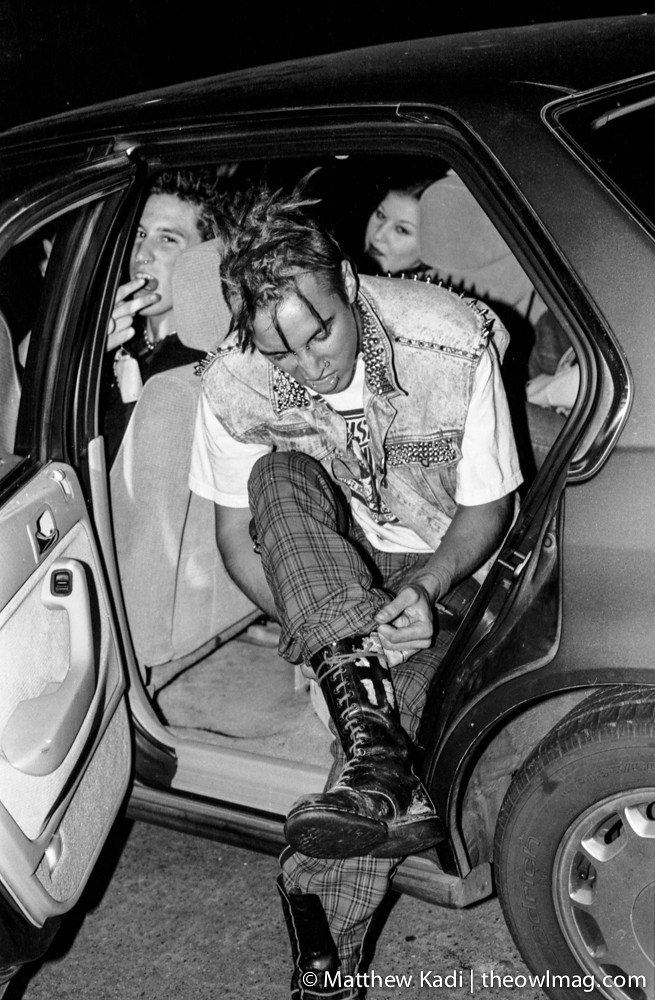 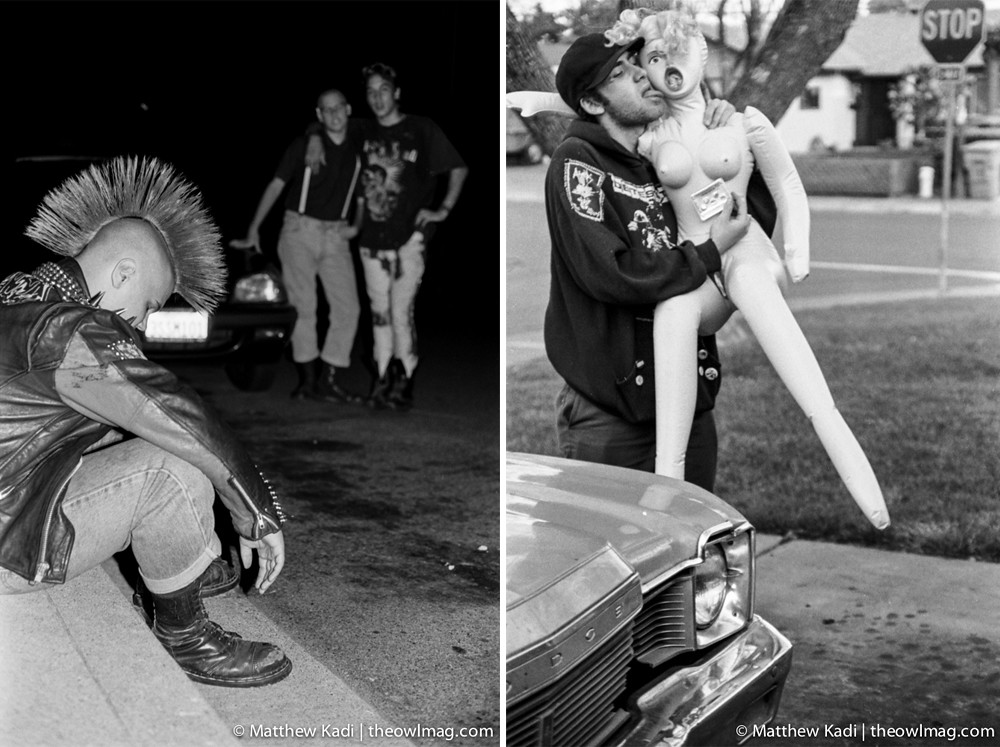 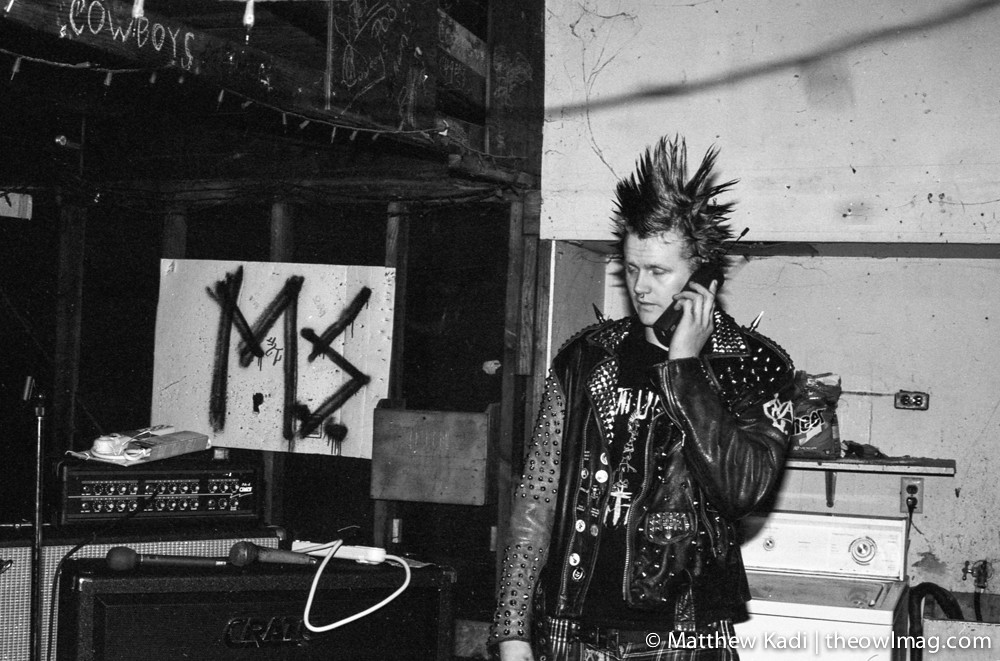 TOM: How did the zine come together?

MK: I have all my negatives dating back to 1998. I decided to get a scanner and see what I really had and started sharing some pictures online here and there. To me, these photos weren’t a big deal since I’ve been looking at them for so long. But to people around me, these were memories from long ago. After seeing other friends make zines, I knew I could do it but was always hesitant to “officially” make something because I thought nobody would be into it. After quickly holding up each negative sheet, circling the winners with a sharpie, the negative scanning party began. 540 negatives got paired down to 250 or so and then down to about 170 in the zine.

Monster Squad turned 20 years old this January. Since most of the photos are of our teenage years as seen through the eyes of a punk kid and of the Monster Squad family, it made sense to have this released at our upcoming 20 year anniversary show. 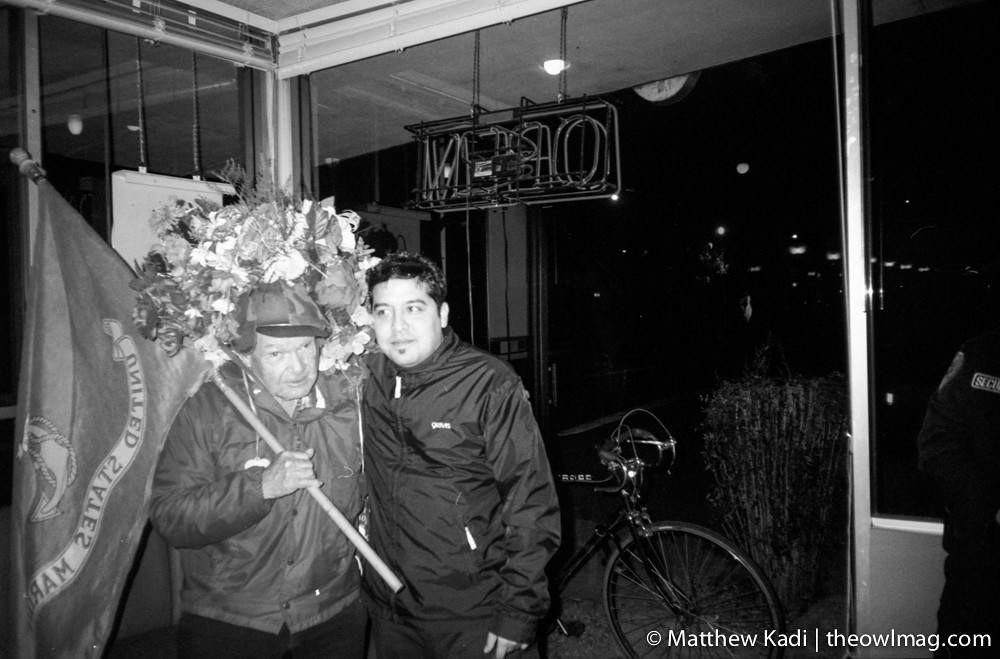 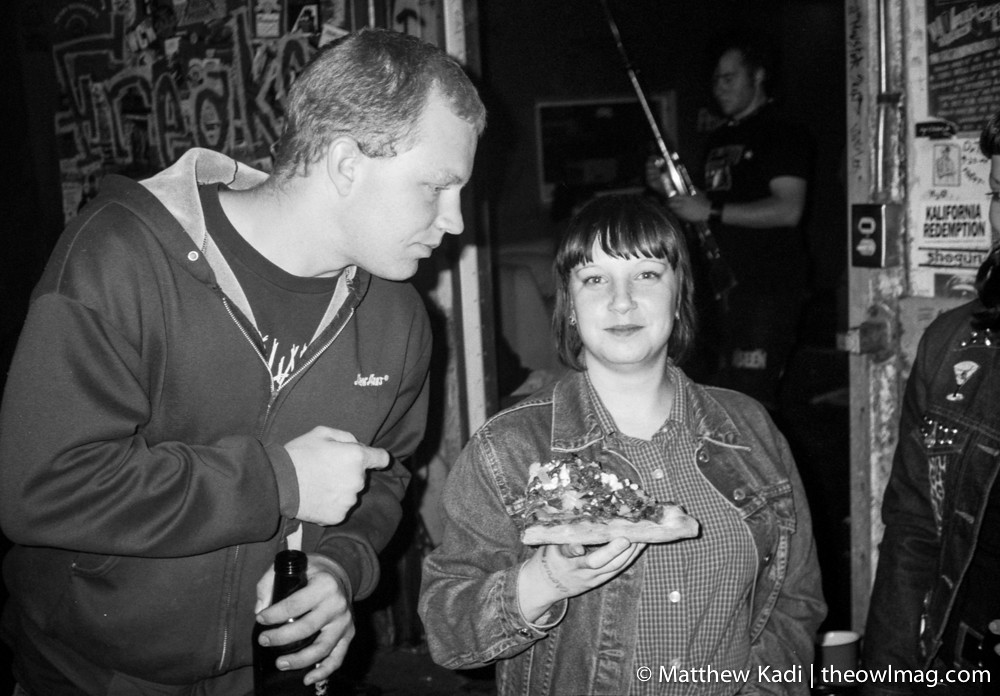 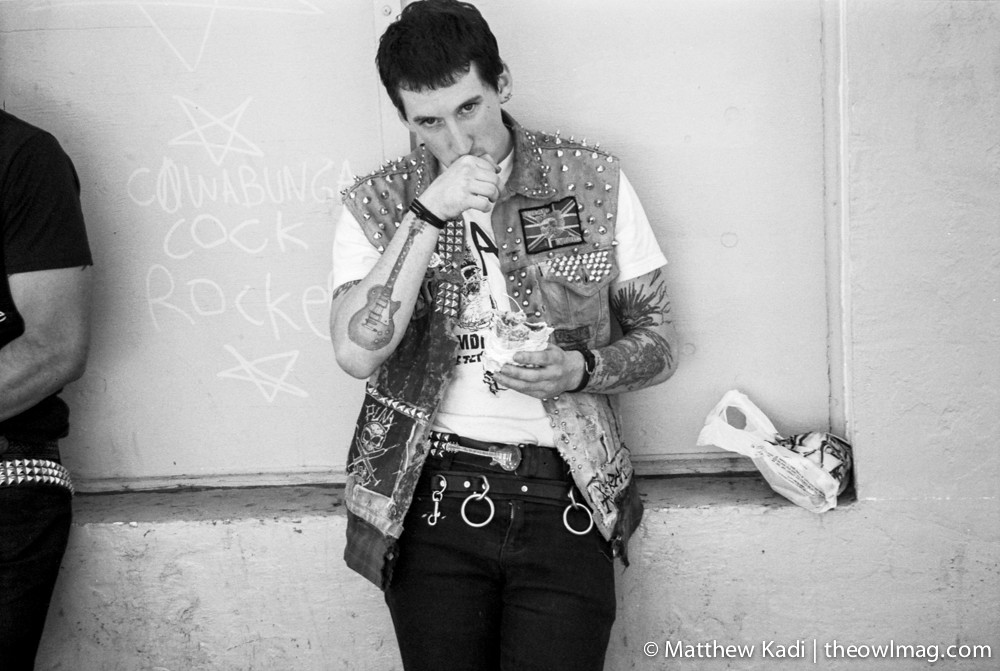 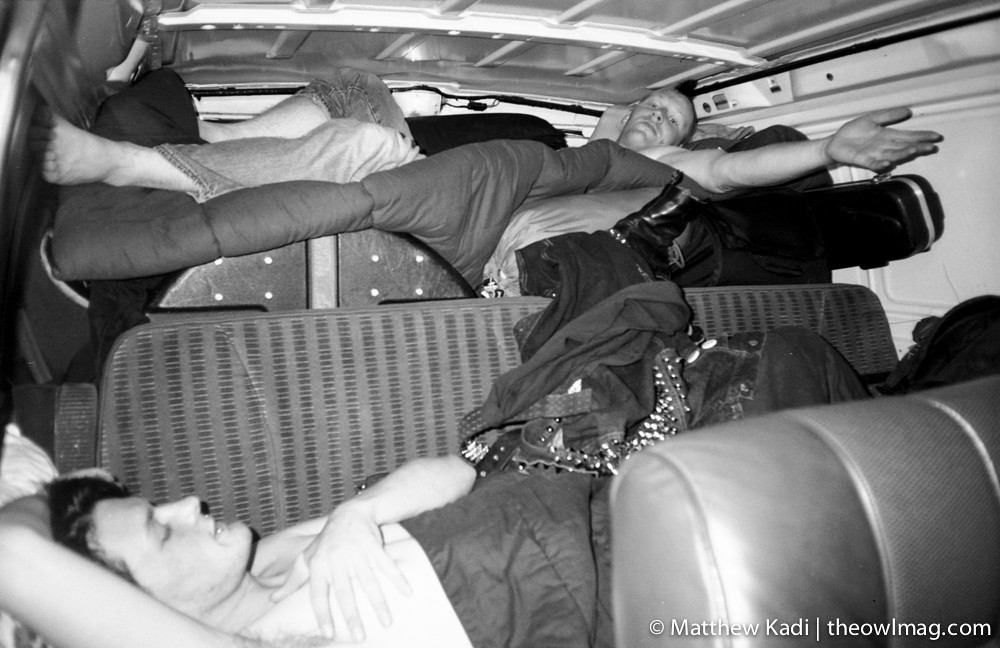 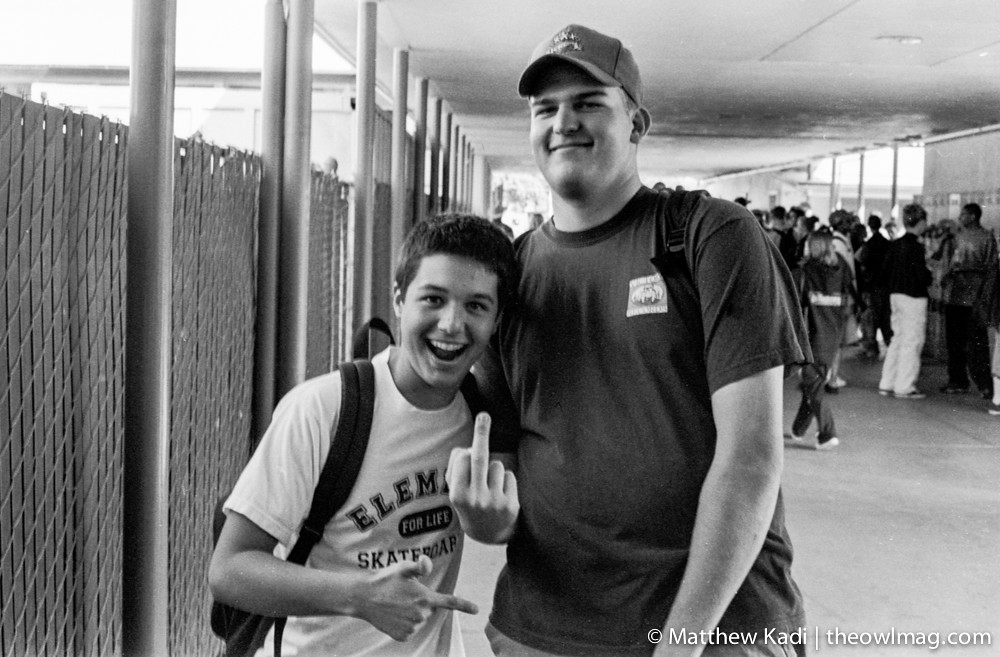 TOM: Tell us about your upcoming show with Monster Squad.

MK: As said above, Monster Squad turned 20 this year. I was 15 going on 16 when we had our first practice. We used to tour a lot, but we only play a handful of shows a year at this point. Though we’re not as active as before, we wanted to have a big show to celebrate us being old. Another band from Vacaville, Side Effects, are also having their 10 year anniversary. We will be releasing our first 4 track demo tape from 1998 that was never put out as well as this zine to go along with the show. It’s kind of a family event for us. A lot of old friends from out of town and friends from out of state are coming to hang out and to play. We’ve got a lot of gratitude for all the friends that helped us out over the years. I feel pretty fortunate that as a band, we are friends first and are still close, even though we don’t all live in the same city.

The show is Friday March 31 at 924 Gilman in Berkeley. More info can be found on the events facebook page. To purchase the zine online: matthewkadi.com 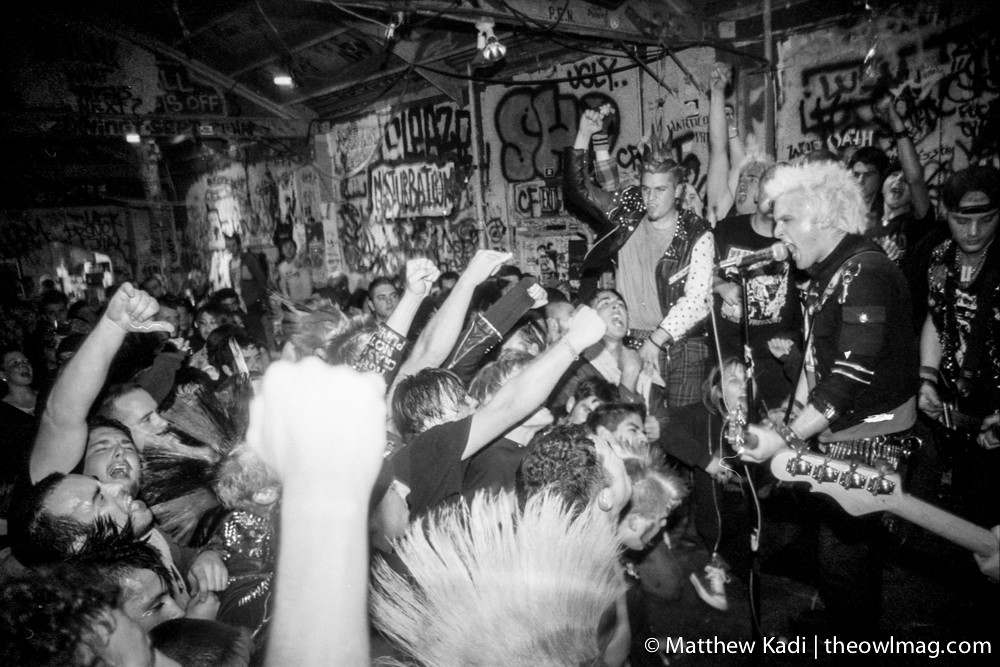