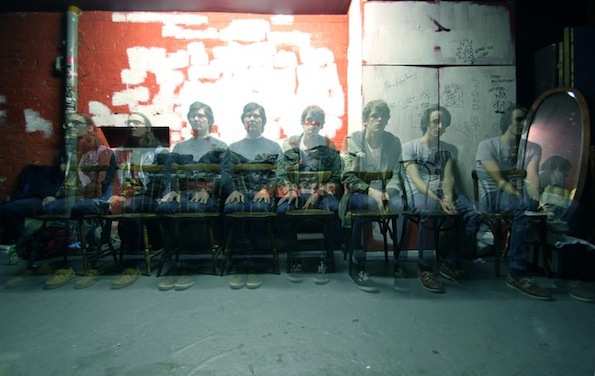 With the recent influx of fuzzed out garage punk bands with un-Googleable monikers, it’s easy to lump them all into a grouping of same chord progressions and unoriginality.Â There are, however several hidden gems like Mazes, who outshine the rest; sneaking in pop hooks within their hazy punk. Rather than attempting to fall in suit with their predecessors, Mazes takes things as they are, and do it better than half of those who try.

Seasoned with several split EPs including one with UK band Spectrals, Mazes is about to embark on new territory with the release of full-length A Thousand Heys on April 12th.

“The album’s a little more studied. Everything we’ve done so far has been a little more slapdash,” says front-man Jack Cooper, “We get bored easily, so I’m not keen on over thinking things. Usually the best idea is the first idea…or it’s at least the purest.”

The album is Mazes to the highest power; with a mix of older tracks and a handful of new ones, fully exemplifying themselves as a band to current fans as well as the ones to come. “We were considering it being totally new material, but thought, well not many people have heard the singles, you know? Like 500 people or something?”

They made their US debut by playing a slew of shows at SXSW, which proved the band has what it takes and pulled them together in a more serious manor than they’d been used to while touring in the UK.

“It was the first time that we’d been able to be a full time band without any work distractions. To be able to dedicate a full week to something we really enjoy was a blast.”

“In many ways it’s just â€˜take it or leave.’ We do try and play well and help the songs come across, but that’s it. I mean we probably need to work on our stage act or something.”

Effortlessly achieving what so many have tried to recreate, their verisimilitude and rawness is what will bring Mazes into success.

“We take everything as it comes because we have little or no preconception. We care though. We want people to like us, but on our terms.”