OUT ON A LIMB: How This Owl Saw The Rolling Stones 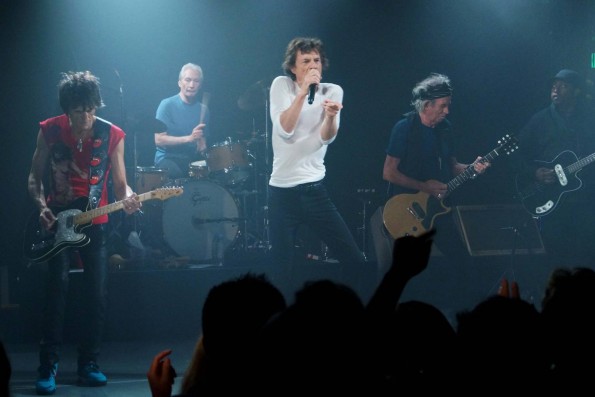 It was right around noon when I found myself getting kicked out of the Echoplex on Saturday, April 27. I’d shown up at the rock venue in Echo Park, CA, trying to buy tickets for a “secret” show that The Rolling Stones were gonna be playing there that night, in preparation for their 50th anniversary tour. After reading about the gig that morning, I rushed as fast as I could to the Echoplex only to find out that tickets weren’t even being sold there, but rather, at the El Rey Theater, about six miles West. Even though that was in the story I’d read, I’d missed it. One thing I did see at the Echoplex, though, was the equipment with “The Rolling Stones” stamped on it, so, even though the Stones show hadn’t been confirmed yet, I knew for sure it was happening.

The Twitter account of the Stones’ mascot, @GRRRegory tweeted that *something* was going to be announced at 12:30pm. After a moment of doubt, I carried onward, to the El Rey! “Stones fans are older, and this seems to be a social media thing, so maybe the line won’t be long,” I thought. I was wrong. The line stretched from the El Rey’s front doors, all the way to the corner, and then to the back of the building, a block-and-a-half in total. I *knew* that it was too many people to fit into the 700-capacity Echoplex, but, I thought, “I’m here. Who knows, maybe they’ll start giving out tickets at the back of the line.”

It felt like every rock fan in town was there, trying to get a spot in an impossible gig — all ages, all backgrounds. I’d heard there were some heated words exchanged with people trying to cut, but the vibe where I was was mellow. At 12:30pm, @GRRRegory tweeted that there’d be a lottery for tickets at 1pm, and that each winner could only buy one $20 ticket. There was hope yet! Good for those of us in the back, not so good for the folks who’d been lined up from as early as 5am. Worse for the folks who were reportedly offering $1,000 to cut to the front of the line.

By 2pm, all of the lottery tickets had been handed out and the wait was on. How would the lottery work? No one knew, but the excitement was palpable. Minutes later, disappointed people started walking our way from the front. The winning ticket was #312094, and anyone with that ticket, or anywhere in the next 400 numbers, was a winner. My ticket was in that range, and I heard this info from a few people, but I didn’t want to assume anything. Still, excitement began to circulate in my head. At last, someone from the El Rey confirmed the good news. I was in!! 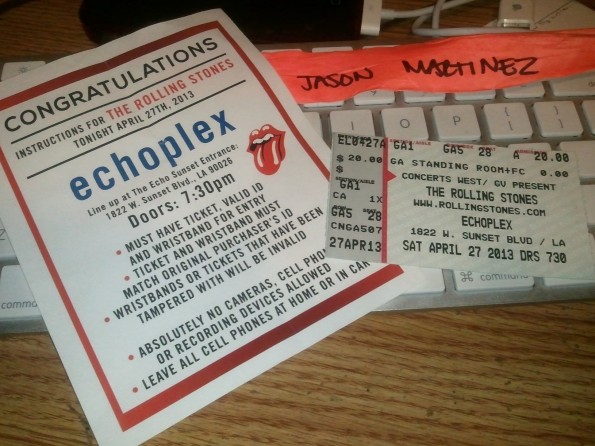 I tried to remain calm, and go over things in my head. “Is my ticket really in that range? Is double-checking enough? Let me triple-check. Oh God, don’t let the sweat from my hand wipe the numbers off! Don’t get mugged on your way to the box office! Hey, maybe I could sell this thing?”

I could’ve. Desperate, older Stones fans approached me. “I’ll give you all the money in my wallet. It’s, like, $120,” said one. I didn’t bite. “How much do you want for it?” After thinking for a bit, I told him to try his luck elsewhere. I knew that this was the type of gig that only comes around once in a lifetime. I’m admittedly not a Rolling Stones fanatic, but they’re one of the most legen-wait-for-it-dary rock bands of all time, and they aren’t getting any younger. Any money short of a life-improving amount would give me seller’s remorse. I did make an offer to an older lady, but immediately had second thoughts. She was such a sweetheart, and I was dreading having to break her heart. When she returned from the ATM and scanned the crowd, I felt like I was hiding from a very gentle Terminator. I tried as hard as I could to be invisible, and, thankfully, she didn’t see me.

The Stones really didn’t want these tickets going to scalpers. Lottery winners had to pay cash, show ID, get their name written on both a wristband *and* their ticket, and then show up to the Echoplex with their ticket, ID, and wristband. I almost wish these tickets could’ve gone on eBay, just to see how much they’d go for, though one guy on Craigslist did offer to let you cut off his hand (wristband included) for $1,000,000.

When I got to the Echoplex that night, I’d realized that I’d AGAIN neglected to read the damn directions. Winners were given a flyer that instructed them to enter through the Echo (upstairs on Sunset Blvd), where there’s usually free parking. I instead paid way too much to park near the EchoPLEX entrance downstairs on Glendale blvd, like a weiner.

All of the major news outlets had their news vans there parked in front of the Echoplex. This was a major news event, and I was gonna be in it! A bunch of scenesters were hanging around outside trying to score an entry, but this thing was on lockdown. What they probably didn’t know was that a number of tickets were sold after the lottery was over. Stones fans who were diehard enough to stick around at the El Rey were rewarded for their determination, and were able to buy tickets, too.

The show itself was craaaazy. There are a few things I’ve seen in my life that, despite being real, my brain just couldn’t believe. One is the time I stood on the sidewalk looking up at the Empire State Building (it’s so huge, it looks fake). The other is being within ten feet of the Rolling Stones. It felt unreal, seeing these men who’ve reached godhead status in rock ‘n roll. People are people of course, but Mick and Keith pretty much invented, refined, or popularized the building blocks of sheer rock starriness.

They’ve been living it for 50 years, longer than some folks work, let alone do one job. There’s no denying that they’re in their 70s now — the tightest sounding musician was touring bassist Darryl Jones, who’s two decades younger than anyone else in the band — but they still put on a great show. They seemed a lot more energetic than they were ten years ago at the Staples Center. Keith Richards mostly hung back in the shadows. He didn’t sing and didn’t really having any flashy guitar solo moments, but he was still undoubtedly the coolest guy in the room. Charlie Watts kept the stiffest of upper lips. Mick Jagger didn’t sustain his notes for as long as he does on their records, but he did expend a lot of energy dancing and jumping around, and leading the crowd in call and response, especially during “Brown Sugar.” Ex-Stone Mick Taylor, thicker than the rest of the gang, joined them for the hardest-rockin’ cut of the night, “Midnight Rambler.”

There were no phones allowed in the venue, which meant no pictures, but also no distractions. We knew this was something special and we were all digging it. One longtime fan I spoke to afterward said that she’d cried a few times. After the show, some guy was selling the nastiest bootleg t-shirts you’d ever seen out of the back of his car. I thought the Echoplex security guards were gonna shut him down, but they actually bought some for themselves. It felt like, for one night, we let go of our day-to-day BS, and just lived in the excitement of rock. A few VIPS like Gwen Stefani, Johnny Depp, and the tiny and reclusive Skrillex were there, but for the most part, luck, pluck, and determination got us in. It was amazing! It felt like that room, with that band, was the only place existing in the universe for that one moment, and I loved it. 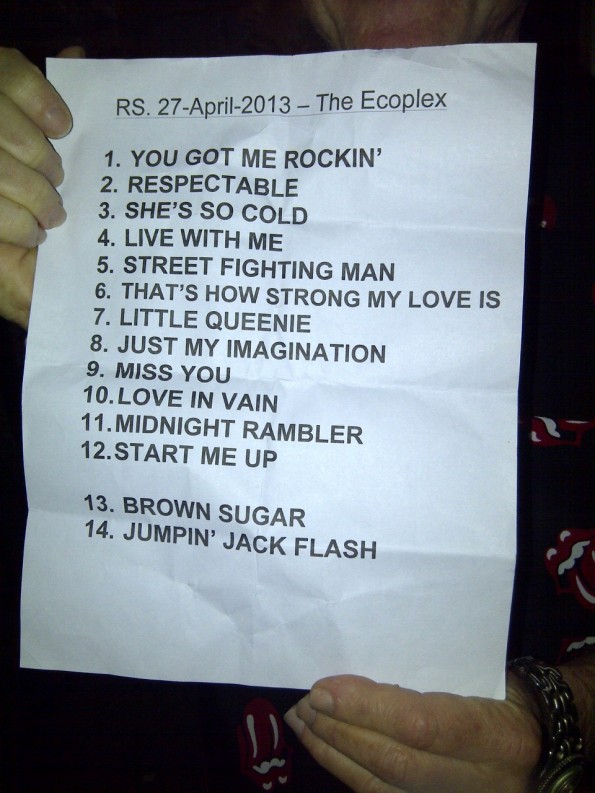