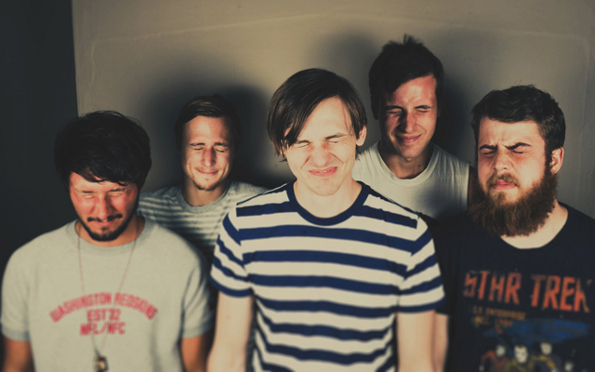 Remember that new guy in school; the one who was a little bit of a loner? The one that didn’t find his crew because he wasn’t really looking for one? The guy that was part geek, part artist, and completely fascinating as all hell? Well the band Young Liars is that guy. And they’re making school a little more interesting.

This new Vancouver import brings a fun synth-pop sound to the scene with their EP Homesick Future (out today). The boys of Young Liars: Tyler Badali (drums), Andrew Beck (bass), Angelo Ismirnioglou (guitar), Wesley Nickel (synths), and Jordan Raine (vocals/guitar); are finding some growing popularity with the release of their single “Colours,” and the rest of the tracks don’t disappoint. I was able to talk to Raine about Homesick Future, the Vancouver music scene, and Albert Einstein.

The Owl Mag: So, how would you describe your sound?

The Owl Mag: What’s the story behind Young Liars?

Jordan Raine: We’ve been the current group for two years in April. I’ve been playing with the drummer and bass player for a year and a half before in a different band, and we decided we needed another guitar player and we ended up finding Angelo. A couple months later decided we needed synth and slowly added Wesley. He actually started and recorded a couple of tracks with us at Ty[ler]’s family farm house. We recorded them in this old retired slaughterhouse and it kinda worked out. In 2010 we started recording with another guy and put together an EP. We started playing shows and the guys at Nettwerk started talking to us and one thing lead to another.

The Owl Mag: I’ve been listening to Homesick Future while riding by bike, making beer, and dancing in the shower; what’s the perfect activity to listen to this EP to?

Jordan Raine: I usually enjoy music most when I’m driving. I guess it depends on the person. For me it’s either driving or walking. I’ve heard folks say it’s got a good beat for running as well. That works. We didn’t intend it, but I guess some of the tempos follow that.

The Owl Mag: The phrase “Homesick Future” is kind of lovely. What’s the story behind that?

Jordan Raine: One day we got together and were rehearsing and Angelo and Andrew had been talking about it. They thought about it in the context of the band and where we wanted the band to go and we thought, “this is a fitting name for the EP and a fitting way for us to release something and say ‘here’s our first try at it and here’s the name we’re giving it.'”

The Owl Mag: One fun track was “Newton Forgive Me.” The title is really playful. If you had a time machine and played it for Newton himself, what do you think his response would be?

Jordan Raine: I think he might be confused. The concept for that name came about after I had written all the lyrics and the title just suited the idea. When Albert Einstein disproved something that Isaac Newton had proved, he would say, “I’m sorry. You’ve influenced me so much, but forgive me; I’m moving forward and showing that you’re wrong and moving the science forward.” It’s the idea that you can respect the people in your past, but you can still disagree with them.

The Owl Mag: “Great Green Light” was an unexpected way to end the EP. What’s the story behind that track?

Jordan Raine: That one was something that came along almost accidentally. Wes, our synth player, was sitting down one day with the keyboard and he just started playing with a loop pedal, and the thing that ended up coming out at the end of the night was “Great Green Light.” We liked the feeling of it; it has this relaxing feeling. Like, I can close my eye and imagine this: I was reading The Great Gatsby at the time, and the name came from the light that Gatsby sees as he looks out from his window. It’s this light on this dock, and when I close my eyes and imagine the “Great Green Light” track it’s this light sitting there in the fog, kind of alone; it just suited that mood so nicely and suited the end of the album.

The Owl Mag: Are there going to be more tracks like that on the LP?

Jordan Raine: We’re not sure. I really like those kinds of interludes, and we really like to make them. But at the same time when you get an album that has a bunch of them it kind of dilutes the tracks. We might end up tacking some of those onto the ends of tracks cause we really really like that kind of stuff and we love playing it live too. Those kind of weird, relaxed interludes.

The Owl Mag: What’s your favorite show to date?

Jordan Raine: Last October we went down to LA, which was the farthest show from home and the first American show we played as well, and that was a lot of fun. We played for Culture Collide, a festival there that had a whole bunch of international bands that they brought in. That was definitely up there. The crowd was fun. They seemed to love that we were from Canada too, so that didn’t hurt. My favorite shows are shows that I’m playing with bands that I know and really love and respect because then I can play and sit there and be in awe of the other awesome bands. And that makes you feel like everyone here is seeing such a solid night of music. That kind of makes it for me.

The Owl Mag: Who are some of those bands?

Jordan Raine: Ono Yoko is one band who’s local here that I think is just phenomenally talented. Pretty much every time I watch them I’m just blown away. They’re getting better and better every single show they play. Another band we actually haven’t played a show with, but they’re local and whenever I seem them live they’re just fantastic, is called We Are The City. Both bands are from Vancouver. There are a slew of fantastic bands in Vancouver these days. It seems like the scene is getting better and better every month. The east coast has been putting out really good acts for a long time and I think that the west coast is sort of playing catch up right now, but I think that’s in part because of some of the radio stations that are coming around. There’s a new radio station in town called The Peak that started maybe three of five years ago. They started this Peak Performance Project that gets groups in and puts them in a boot camp where they send them away and put them with producers and a manager and a music teacher and hone everyone’s skills. At the end of the day they award money to the band that wins. It’s been good for the bands who’ve won, but I think it’s also encouraged bands to get together because they have this motivation to do something very immediate. And that started to bring other bands out. There’s been a lot of alt rock from Vancouver since the early 2000’s like Nickelback and that whole scene. They’ve done very well but I think there’s a huge part of Vancouver that’s not represented. It’s nice to see that come out a little bit more now with bands like Ono Yoko, We Are the City, and the Belle Game.

The Owl Mag: What are you listening to right now?

Jordan Raine: I just watched Drive and immediately I downloaded the soundtrack. It’s so good. There are only four non-score tracks on there and those four tracks are great electronic sounds. The Chromatics, Kavinsky & Lovefoxxx, College, Desire… oh, so good. Angelo’s been sending a lot of Motown my way, like the Johnson Brothers, and that’s been really, really cool. I’m realizing there’s so much good music out there that we can listen to and live from and that’s just awesome. And the new Bon Iver album is always jumping back into my playlist too.