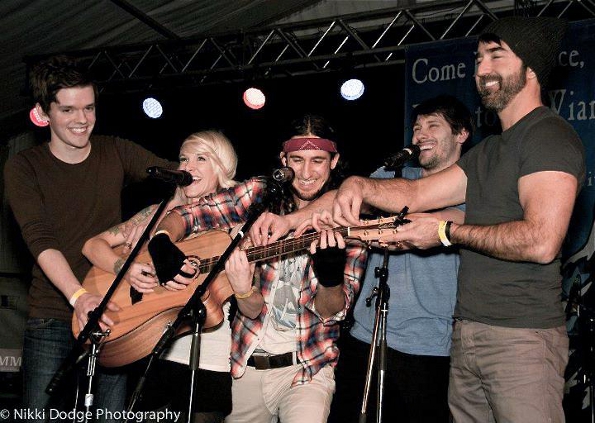 We’ve all seen the video covering Gotye‘s “Somebody That I Used to Know,” which features the five members of Walk Off The Earth playing just one guitar. Since its arrival on the YouTube-sphere in early January, the video has gotten nearly 49 million hits. I chatted with member Sarah Blackwood to get some details on this mysterious Ontario band.

The Owl Mag: How did you guys come up with the idea to cover Gotye‘s song “Somebody That I Used to Know?”

Sarah Blackwood: It was Gianni’s [Guitar/Harmonica/Trumpet/Bass/Vocals] idea. He heard the song on the radio and he brought it to us and said “this song’s so cool.” It’s not like anything else you hear now. It helps restore the faith in radio and mainstream kind of music. We all really liked it and thought it would be a cool for us to do.

The Owl Mag: So do you guys do a lot of covers?

Sarah Blackwood: We do a pretty decent mix; some covers some originals. We like to change it up though. When we cover the songs, we do it in a very different way.

The Owl Mag: Did you guys ever expect it to get this big?

The Owl Mag: What has all the publicity been like? What was it like to be on The Ellen Show?

Sarah Blackwood: Ellen was really cool. We were nervous, but the people there were so nice. It was a neat experience.

The Owl Mag: What’s your response to people that say you were lip-syncing the song?

Sarah Blackwood: There’s always controversy. YouTube is a haven for people who have opinions. The video is all over the world. No matter what, somebody’s going to look at something and have something bad to say about it. We don’t concern ourselves with it. We don’t really care what people think.

The Owl Mag: So we all know about this song, but a lot of people don’t know much about your background: what’s the story behind Walk Off The Earth?

Sarah Blackwood: Gianni and Marshall started the band six years ago. Gianni and I started working on different projects [together]. We’re all from the same hometown in Ontario. When I had stuff to do at the studio, I would go to Gianni. He helped me record my second solo album. At that time, they needed female vocals, so I said sure, I would do it. Gianni started getting into the YouTube world, we started to do research, and made some really cool videos. I joined the band like a year ago, but it wasn’t official, because I have other projects going on and I was touring. It did’t need to have a priority. But since the newest video, we’ve had to take bigger steps to get everything established.

The Owl Mag: What are those bigger steps exactly?

Sarah Blackwood: We’ve been working with more people. We’re building our team to have access to other avenues. We’re kind of building an empire in a way because now we have the ability to reach more people.

The Owl Mag: You said that you and Gianni have done research on YouTube. What do you think it takes for a video to get big on site?

Sarah Blackwood: Well that comes from creative ideas. Our research was mostly about how to get it out there. That’s pretty much how anything in the music industry works. You have to do stuff that hasn’t been done in a certain way or at all. It also has to be visually stimulating since our social networking is all based around people watching things.

The Owl Mag: What can we expect from you guys in the future?

Sarah Blackwood: A new record, a lot more videos. Music, music, music. We’re actually shooting a new video at the end of this week. Touring is going to be a really big thing too.

The Owl Mag: Do you guys have any set plans for the tour? Where are you planning on going?

Sarah Blackwood: We’re going to be playing smaller club shows for sure. We’ll be in New York soon. We’re going to go to Europe and play Germany. Turkey and Lebanon are in the works right now. We would really like to do an across Canada and across the States tour too. After the record is out, we’ll be touring a lot.

The Owl Mag: Is there anything else you want to add?

Sarah Blackwood: Everybody should check out the facebook and YouTube channel. But mostly, thank you everyone for watching the video and being so awesome.