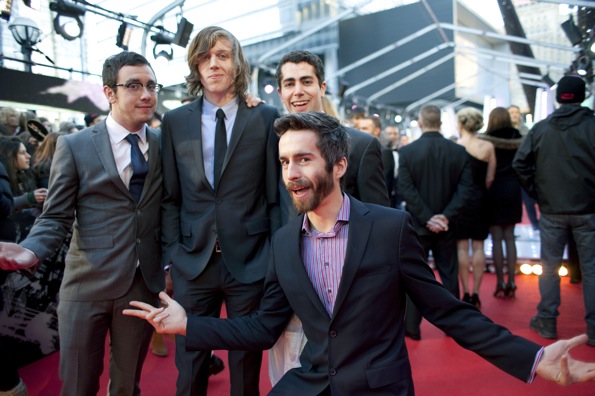 It’s apparent that the members of Tokyo Police Club have a close relationship with their inner child. They have been known to spoof the Boardwalk Empire intro and have TPC coloring contests, but that doesn’t mean they can’t be serious enough to buckle down and make their own special brand of awesome music. Recently, in preparation to roll up their sleeves and start writing some new stuff, they recorded 10 covers from each year in the last decade in 10 days right here in L.A. They’ll be back this weekend for the L.A. 101 to perform. Will they add some of their covers to their set list? We caught up with guitarist Josh Hook to not only swoon over his slight Canadian accent, but also to find out more about the covers and his thoughts on good ol’ L.A.

The Owl Mag: From coloring tour posters to playing at the Junos to the 10 Songs, 10 Hours, 10 Days, 10 Years project, it’s easy to see you’ve been busy lately. What has been your most enjoyable event so far this year?

Josh: You said it when you said the Junos. Being from Canada and even being asked to go play that is obviously a huge honor. So we were sort of beside ourselves for the whole night to be in that company, to look across the stadium and see all these people you grow up being like, “ah that all-star Canadian icon” and then you’re just sort of all in a room with them. I think that’s something that …I mean, shows are amazing, I always love playing for fans, but when you’re in that kind of environment, that you never really think you’re gonna be in, it always sort of takes you somewhere else.

The Owl Mag: What song did you perform?

The Owl Mag: On the 10 Songs/10 Hours/10 Days/10 Years project, how did you determine what songs you would cover?

Josh: We had a list in an email thread that was going back and forth. That project started as a writing exercise because it’s always easier to do a cover of a song then just jump straight into writing your own material, so we just started it for fun. It all started when we covered “Last Night” (by The Strokes) with Two Door Cinema Club on the tour. We sorta realized that was from 10 years ago. Then we were like “wow, what are the songs from the last 10 years that we sorta just missed out on when you’re doing your own thing,” and that sort of lead us into covering a song from each decade. As for the songs themselves, we wanted to pick some songs that weren’t really obvious, I mean “Last Night” was a really obvious one because we get comparisons and what-not, but we wanted to pick songs that we liked when we were growing up, like Moby and Jimmy Eat World and then sort of the left field ones, I guess like Miley Cyrus. We just wanted to have fun with it, we didn’t take it seriously at all. I mean we had 1 day to record a song and we just wanted to have a lot of fun with it and just see how it went. And I think for the most part they went well.

The Owl Mag: Which cover from 10/10/10/10 has gotten the most favorable response from fans?

Josh: Well, we have a radio station in Toronto that we’re fortunate enough to be really really tight with. They’ve been playing Kelly Clarkson and Queens of the Stone Age, our covers of each. I think the Queens of the Stone Age one is a little bit of a cheat because it’s really Orianthi that makes that song, we just sorta play around it.

The Owl Mag: Which cover turned out the best?

Josh: I like Moby. It was the first one we did and I feel like maybe that has some weight on my decision because we were in this new studio and we were like “ok, what are we doing? We’re doing one song in…? This isn’t gonna turn out well at all.” But that one didn’t turn out bad at all so we were like “oh, we can do this!” so I just sort of have an attachment to that first one.

The Owl Mag: Which cover was the most memorable day of recording?

Josh: I think it was probably when we did the Harlem Shakes because that’s a band that not a lot of people know and they’re really good friends of ours; we did a few tours with them, so it was kind of nice doing a song that most of our fans are like “who is this?” because this isn’t Moby or this isn’t Little Sister or something. It was nice to play that song and have people that probably haven’t heard that band, hear it for the first time and say “oh, this is cool” and maybe go and check out the Harlem Shakes’ actual stuff and find out that this band is really awesome.

The Owl Mag: Your next show will be in L.A. for the L.A.101 Festival. You’re not from L.A. or even the U.S. How do you feel about being a non-L.A. band at a festival celebrating some of the greatest things about L.A.?

Josh: Over the course of our career we’ve grown really fond of L.A. and we have some really great friends out there. We’re spending, increasingly each year, more and more time out there. We recorded our last album there after running around in circles in New York. We have a pretty good attachment to L.A. I hope people don’t see it that way and think “oh they brought this out-of-town band in to come in and play our festival” because we don’t see it that way. We really love L.A. We have some of the best shows there and in Pomona as well.

The Owl Mag: Think back to the first time you visited L.A. What was your impression?

Josh: Brief. It was very brief. We were obviously in a van so you don’t have a whole lot of time. I mean, you’re sort of in and out, and you get the worst of the city when you see it that way, you arrive at rush hour, you’re stuck in traffic, you get to the club, you have to rush soundcheck, then you have a shitty dinner because you can only go somewhere close and you’re like “I don’t know, over there, that’s good,” and then you’re gone the next day. But luckily, that night we got to meet our manager’s friend, who he’s been friends with for awhile. He came out to our first show, one of the most wonderful people you will ever meet, and he was like “No, you guys are sleeping on my couch, I’m gonna take you out to the Griddle in the morning and we’re gonna do it properly.” Even though it was brief, we did get a very condensed, jam-packed view of L.A., sort of changed your opinion of it, it’s not just, I guess the popular opinion is a little bit shallow, you realize.

The Owl Mag: What’s your favorite thing about L.A.? What do you look forward to the most when you know you’re coming here?

Josh: We have a lot of close friends that are there, a lot of people are just based there, I guess by coincidence, so it’s always fun just to go there and catch up with everybody because we don’t get to do every tour together. Then the weather is always something you can’t say no to. There’s a bunch of things.

The Owl Mag: Can you give us a hint about what we can expect from your setlist at the L.A.101 Festival?

Josh: In terms of throwing some of the covers in, we’ve always talked about trying to do something like that and a couple shows we’ve played we’ve had people yell out their favorite cover so hopefully we’ll try and work something like that in. Other than that, we’re at that point in the tour where we’re winding down and getting ready to write new stuff, so we have a lot of fun playing the songs because none of them are new any more. It’s kind of like in school band where you’re like, “I’m not gonna play that part, I’m gonna play this part.” Sorry, that was a nerdy band joke. But you know, we’re just really comfortable with it and we’re really looking forward to the festival, really.