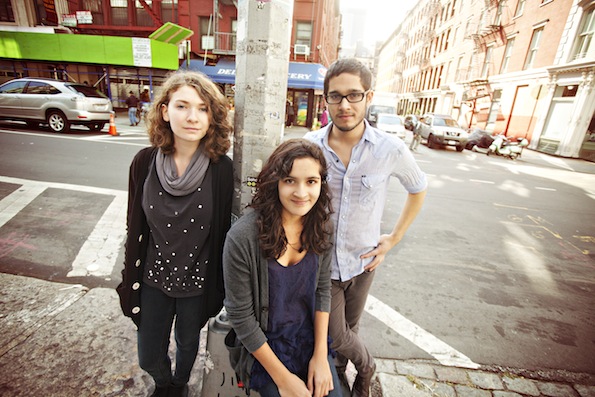 Refreshingly unpretentious, NYC-based the NowhereNauts boast impressive musicianship far beyond their years. With their self-titled album dropping on 5/3 (check out our review of it here), The Owl Mag was intrigued, and we went on a mission to get to know the youngsters just a little bit better.Â Hunter Lombard and siblings Anders and Sofie Kapur gave us a little insight into the life as the NowhereNauts.

The Owl Mag: Tell us a little bit about how the NowhereNauts formed after the three of you left music school?

NowhereNauts: (Anders) We had all played together before and enjoyed it, but never really thought about expanding into a band. It was Kevin who pushed us in that direction.

The Owl Mag: What’s some of the best advice thatÂ Kevin March (former drummer of Guided by Voices)Â has given you guys?

NowhereNauts: (Anders) Kevin has been managing us and producing us, which has really been a huge help. We wouldn’t be in the position we’re in today without him. He said something recently that stuck with me: “If you’re not a good dancer, you’re not a good musician.” And then he proceeded to tell us that none of us could dance. The more I thought about it, the more I realized it was true. Kevin pushes us to be become better and better as musicians, and I really appreciate the role he plays.

The Owl Mag: Do you remember the first show you ever went to? Who did you see?

NowhereNauts: (Hunter) Well, I don’t exactly remember this, but I was in the womb when I went to a Bruce Springsteen concert. The first show that actually had an impact on me was when I saw The White Stripes when I was 12. It was absolutely life changing. That’s when I decided that I wanted to play music for the rest of my life. There was no looking back after that.

The Owl Mag: List the top three albums in your iPod currently getting the most play time.

NowhereNauts: (Hunter) The Avalanches – Since I Left You, Fever Ray- Fever Ray, Austra- Beat And The Pulse EP.
(Anders)Â The Age of Adz by Sufjan Stevens – he’s a musical genius. Little Joy by Little Joy: This is a really short album/side-project by members of the Strokes and Los Hermanos, a great Brazilian band. It might be some of the catchiest music I’ve ever heard. I picked it up over a year ago and I still can’t get the songs out of my head. Tarpits and Canyonlands by Bombadil: This is a band I saw completely by chance at some local crafts festival in North Carolina. Even though they weren’t huge, I got hooked instantly.
(Sofie) Show Your Bones- The Yeah Yeah Yeahs, Power, Corruption, and Lies– New Order, Fleet Foxes– Fleet Foxes.

The Owl Mag: “Heat Stroke” has a very dreamy shoegaze feel akin to My Bloody Valentine. Are you fans of MBV? What other bands are you fans of and/or have musically influenced the NowhereNauts?

NowhereNauts: (Hunter) I’m a huge My Bloody Valentine fan. The whole dream-pop/shoe-gaze sound that you hear in bands like MBV, Blonde Redhead, Autolux, and The Jesus and Mary Chain will always sound so right to me. I can’t speak forthe rest of the band since our tastes in music are so varied, but bands like Sonic Youth, Captain Beefheart, DinosaurJr., The White Stripes, St. Vincent and the Riot Grrrl scene have had a huge impact on me. Lately I’ve been listeningto a lot of Lady Gaga, Washed Out, Sufjan Stevens, Twin Shadow, and Tune-Yards.
(Anders) In the beginning, we just started writing songs and whatever came out, came out. We all had really different backgrounds and influences, and that came through in our writing. But, once people started making comparisons to bands like the Pixies, Pavement, Weezer, MBV, I guess it was my natural reaction to go start listening to that music more. Now I’m really into it! I love the simple, raw, driving power that those bands have while still managing to maintain poppy song structures and melodies.

The Owl Mag: Last year, the NowhereNauts did a soundtrack as the fictional band for Josh Farrar’s book “Rules to Rock By.” Was it fun to have this different persona or alter ego known as The Bungles?

NowhereNauts: (Hunter) It was fun to take a break from playing our own music and just be a completely different band for a little while.
(Anders) There’s something to be said for being able to play and not being under pressure to represent oneself. I had a lot of fun playing with Josh. We played some really fun covers with him.
(Sofie) “The Bungles” was a strange experience, but a great way to get into another point of view. We even wrote some original music for Josh, which was quite interesting. What’s great is that now I find myself looking at our songs from lots of different perspectives when I’m writing and performing.

The Owl Mag: Now for a little word association. Tell us the first thing that comes to mind — Kevin March.

You can check out more of their songs on their Facebook page here.