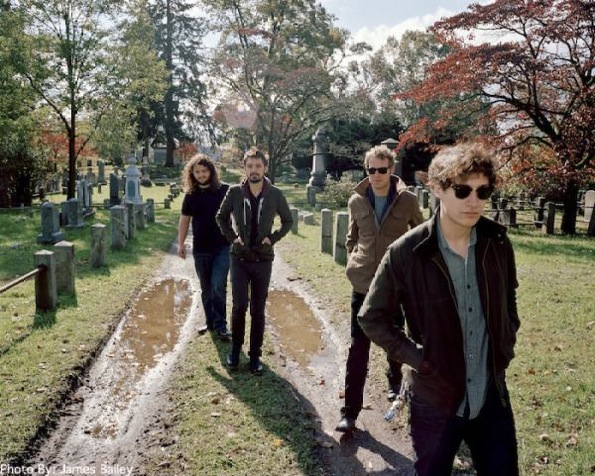 Lonely Forest, or John Van Deusen, Tony Ruland, Braydn Krueger, and Eric Sturgeon, have been under our noses for quite a while, and after a year that has kept them busy touring with bands such as Two Door Cinema Club and Minus the Bear, it seems they are ready to tackle the next year in much of the same way — slowly and steadily. Front man John Van Deusen talked to The Owl Mag’s Hillary Smith about a 63-hour road trip from hell, their plans for the future, and the inspiration behind one of their greatest songs.

The Owl Mag: You were recently on tour with Minus the Bear and before that, Two Door Cinema Club, how were those experiences?

John Van Deusen: Touring with both of those bands was extremely fun and also really, really good for us because we got to play for so many people, it was a good crowd, they responded well.

The Owl Mag: A personal favorite song of mine from your debut album Arrows is “We Sing in Time,” could you talk about the meaning of that song?

Van Deusen: It was a lot of confusion and frustration with the current political climate, a general feeling of current events. It all felt like it was spinning out of control, I kind of wrote it from that perspective. Very teen angst. I remember I was sitting at the lake by my parent’s house watching them flatten a bunch of trees to build houses and it was really bumming me out. I kind of wanted to remind myself that it’s not all bad so I wrote the chorus to be hopeful.

The Owl Mag: Also, why the name Lonely Forest?
Van Deusen: I was probably seventeen; I remember writing on my hands. I was reading the Silver Chair, The Chronicles of Narnia book, and the author described the setting as a very lonely forest. At first it was John van Deusen and the Lonely Forest, but I eventually took my name out of the band, I wanted to sound more rock ‘n roll.

The Owl Mag: What’s the craziest thing that’s happened on tour so far with you or the venue or fans or whatever?
Van Deusen: I think that craziest thing we’ve done, in my mind, and it’s probably because we felt so malnourished, was when we started in Anacortes and went to Boston, a 63 hour drive and we only stopped at gas stations and subways. Definitely the most insane, worst road trip of my life. We stopped at Mt. Rushmore because we needed a break and it ended up being underwhelming, you had to pay to get in. There’s a picture of us (the band) lined up directly below the Presidents’ heads, we all look so terrible.

The Owl Mag: Who writes the lyrics to your songs, is it always the same person?
Van Deusen: Um at this point, I have written the lyrics to every Lonely Forest song. And that may change, it just depends on if the other guys decide that it would be fun to write songs. Some view writing as a chore. And others just want to write down their feelings and thoughts; it’s just what they do. I’m that guy.

The Owl Mag: How do you see yourselves in this crazy music scene?
Van Deusen: It’s a good question. We’re definitely a slow moving thing, we think really hard about our decisions, we don’t really make quick decisions, and I think we’re also not trendy. We want it to be honest and so I think because of that, there’s nothing really hip about us. Which essentially in my mind, just means it’s gonna take us a while. There’s always gonna be a place for our kind of music, it’s not really “buzz worthy,” I hear that word a lot. We’re just kind of a tortoise and I think other bands are the hare.  Slow and steady wins the race kind of thing.

The Owl Mag: What drew you into making music in the first place? Can you imagine yourself doing anything different?
Van Deusen: Um, I can imagine myself doing lots of different things. Maybe that’s just because I have a vivid imagination. I grew up around music. My older sisters were violinists; they played a lot, a lot of violin. This community is very artistic and supportive of anyone who wants to express themselves. One of my sister’s boyfriends gave me a drum set when I was in the 5th grade. I started playing guitar, drums, and piano in 5th grade. I was just too excited. Most of the time you just do it because you really love it.

The Owl Mag: When you get on stage and see the crowd, what is the first thought that goes through your head?
Van Deusen: I’ve never been asked that before, ha I don’t know! I don’t even know if I think about it. You know when you’re driving and you’re just going through the motions? I think that happens to me on stage and every once in a while I will realize what I’m doing and be like “I’m on stage in front of 600 people and they’re all listening to me. Holy cow, that’s crazy!”

The Owl Mag: Why did you/guys decide to team up, John with Tony, Braydn, and Eric?
Van Deusen: So Tony and Braydn and Eric would all jam together and had instrumental music in the garage. The garage is actually where we still practice today. Braydn knew me form high school and he knew that I could sing, so he invited me over to play with him. We actually have our first practice recorded. There was a certain chemistry that we had never experienced with anyone else and it just kind of worked.

The Owl Mag: Where has been your favorite place on tour?
Van Deusen: By far and large, maybe not by far because there are so many cool places I fell in love with like Quebec, but I really like playing in Montreal and Toronto. My favorite venue to play was this place called the Nine Thirty Club in Washington D.C., and you know, the fans in D.C. were so cool. Definitely my favorite place to play on the west coast is San Francisco by far. We spent two weeks recording Arrows in San Francisco.

The Owl Mag: Are there any artists or bands that you draw inspiration from?
Van Deusen: There are countless artist and bands we draw inspiration from. We kind of have this thing right now for Scottish bands. There’s a group of Scottish bands we really love. Besides that, there are so many artists I love personally. I’ve been listening to Guided By Voices and Ween, they kind of play whatever they want to play.

The Owl Mag: If there is one thing you would like to say to all your fans, what would it be?
Van Deusen: I think seeing us live is important if you’re at all interested in getting us. I think if you want our music to make sense, you probably wanna see us live, we’re a lot louder and more energetic in person.