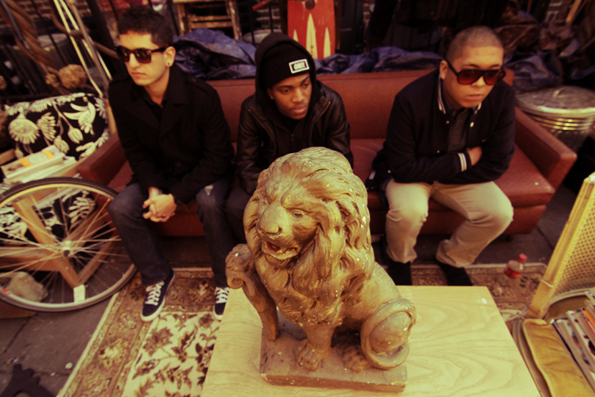 The Dean’s List are three inspired musicians from Boston who are out to have a good time and make music that people can really relate to. If you read below, you’ll find out that they are an easygoing bunch with an interesting agenda: creating music whose genre is indefinable.

The Owl Mag: What can you tell us about your new album that will be released soon?

Sonny Shotz: It’s called Generation X and will come out April 6. Indie, hip-hop, pop, electro, it came together like in two months once we got focused. It’s our second really big project that we put together. It’s just a bunch of music that we love and every track sort of represents that we are generation X. We are saying that we are the people before us; we are the people who inspire us. There’s not really a genre to put it in, I think it’s just a different sound.

The Owl Mag: Where have you guys drawn inspiration from musically?

Sonny Shotz: I was influenced by my mom growing up; she listened to Bob Dylan and he’s my favorite artist ever. I really look up to him and his style of writing so I was really inspired to make something that could inspire someone else or other writers to do their thing.

Alexander Mendoza: I got a lot of my inspiration from growing up listening to Latin and jazz music, my mom was brought up with a lot of classic music.

Mik Beats: I kind of grew up on the radio; it really influenced the music I make as far as production. And pop culture too, mainly because my parents never showed me music. Also, playing the piano since I was seven kind of forced me to keep playing classical piano. I went to Berklee College of Music.

The Owl Mag: How do you think this tour is going to be?

Sonny Shotz: Yeah, we’re excited going into it. We’re getting a lot more experience now and we’re more comfortable with the band and we’re always trying to grow. Hopefully next fall we can have a bigger live show. I’m kinda excited about seeing our fans again, getting back on stage, and being able to interact with our fans in person, too.

The Owl Mag: How would you say this album compares to your others, like The Drive In?

Sonny Shotz: The Drive In was a really solid project for us because it was above anything we did before, but this one shows a lot more maturity…it’s much more developed.

Alexander Mendoza: People are going to be able to hear the sound and see we’ve grown.

The Owl Mag: What is your process on songwriting?

Sonny Shotz: Normally Mik or Mendoza start working on beats and we’ll work around that. Sometimes I have an idea for something. It’s never really the same process every day, it’s always changing. Every song, we each have our own touch in it…it’s really a collaborative effort.

The Owl Mag: What specifically do you love about rapping?

Sonny Shotz: It’s a good way to talk to people and get your point across. I think over the years rapping has gotten a bad name because people rap about the wrong things. I really like songwriting, I think that’s where my love is, that’s what I really have fun with. When I write the chorus and hooks I really have fun doing that.

The Owl Mag: What do you guys hope to accomplish with Generation X?

Sonny Shotz: Well I think we just really want people to know that The Dean’s List is a group of talented musicians who make the best music in the world. Just kidding. We just don’t want to be categorized into any box or genre. Once people get into our music, they’ll really understand we make music because we love it. We’re just trying to change the world. Kinda.