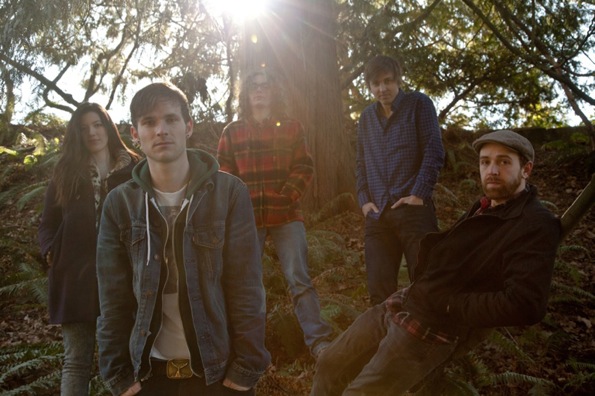 Vancouver indie rock quintet Said The Whale is having a stellar year. What, with finishing their first US tour this spring and opening for Tokyo Police Club’s Canadian dates, as well as winning a Juno award, 2011 has been a good year for the band. They took some time off before embarking on their first European tour to answer some questions for The Owl Mag.

The Owl Mag: Congratulations on winning the Juno award for 2011 New Group of the Year. You’ve been around since 2006. How does it feel to finally get some well deserved recognition and get a Juno to boot?

Said The Whale: It feels incredible! We’ve been working really hard for the past 4 years, and to be recognized at that level is pretty amazing.

The Owl Mag: How would you describe the band’s sound to people who’ve never heard it before?

Said The Whale: Honest music, written from the heart, inspired by life in the western world circa 2011.

The Owl Mag: What’s the origin of the band’s name? Can you give us a little backstory?

Said The Whale: I wish we had a really exciting story to back up the band name, but no deal – it was just the result of a brainstorm between Ben and I.

The Owl Mag: There have been several lineup changes, what instruments do each of you play, if any? How are the current members getting on with each other?

Said The Whale: I’m Tyler, and I play guitar and sing. Ben Worcester plays guitar and sings as well. Spencer Schoening plays the drums. Jaycelyn Brown plays keyboards and sings backup vocals. Our newest member Nathan Shaw plays bass. Everyone gets along swimmingly – I think in a new band, lineup changes are inevitable as people figure out what directions they want their lives to head in, but I think we’ve finally found our lineup.

The Owl Mag: Who writes your songs? Describe your song writing process?

Said The Whale: Ben and I write the songs, but we write individually of one another. We generally come up with the bare bones of the song and then bring it to the band to be fleshed out and rearranged.

The Owl Mag: Who are your musical influences?

Said The Whale: Vancouver has an amazing music scene, and to be honest, we are really influenced by a lot of the bands we’ve become friends with in the scene over the past few years. Yukon Blonde, Mother Mother, Dan Mangan, Aidan Knight to name a few.

The Owl Mag: If I asked you to make a playlist for me what bands would I expect to see on it?

Said The Whale: All of those bands I mentioned above, we’re total Vancouver homers – Yukon Blonde, Mother Mother, Dan Mangan, Aidan Knight, Hannah Georgas, Oh No! Yoko, We Are The City, the list goes on…

The Owl Mag: How would you define musical success?

Said The Whale: If we can pay our rent/bills, and be able to share our music with as many people as possible, then we will feel successful.

The Owl Mag: You’ve just finished up your first U.S. tour, how was that experience? Any interesting pranks on the road or interesting fan encounters?

Said The Whale: Touring the US was incredible. I think the thing that took us the most by surprise was how beautiful the scenery was on the drives. We sometimes find ourselves so blindly proud of being Canadian that we think everything in our own country is “THE BEST,” but we were all pretty humbled by what we saw in the US. The American countryside is the most beautiful I have ever seen, hands down. Not to mention how wonderful and friendly everyone was along the way, you can buy beer in corner stores…etc…. It was one of the best tours we’ve been on. We can’t wait to go back.

The Owl Mag: You just finished touring with Tokyo Police Club in Canada, how did that go? How’s it different than touring in the U.S.?

Said The Whale: TPC are an incredible bunch of guys. Of course, the shows are incredible (sold out every night), but it makes such a huge impact to be touring with a group of people who are so great to hang out with. We’re gonna miss those guys dearly…

The Owl Mag: You guys also have a few European tour dates? Is this the first tour in Europe? What are you looking forward to?

Said The Whale: This is our first time in the UK! Unfortunately, we won’t get into the rest of Europe, but we’re heading there with open eyes and ears. It’s going to be a great experience.

The Owl Mag: What’s next for the band? Any parting words?

Said The Whale: This summer we’re recording our third record. We can’t say much about it at this point, but we’re really excited… I think it will likely be released March 2012