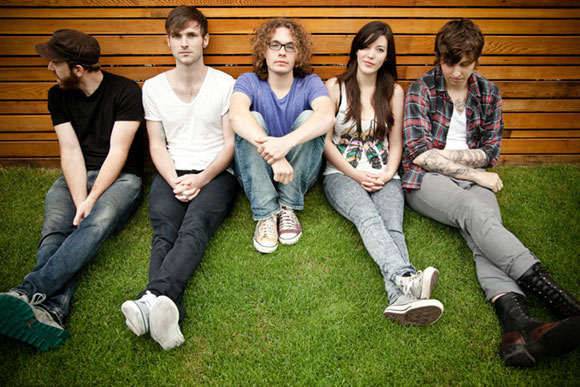 It’s easy to tell when people are passionate about something, and these five Vancouver natives of Said The Whale carry a deep-seeded appreciation for music. Just talking with them for a little while showed me this isn’t just a hobby for them and that they’re very aware of the power and influence music can have. Their latest album, Little Mountain, is a step forward in their musical journey — a step with upbeat tunes, twangy vocals, and many a reference to their beautiful hometown. Read below to find out what they had to say to The Owl Mag‘s Hillary Smith about their great sense of humor and what they consider to be the best part about making music.

The Owl Mag: My first question is, what did the whale say?

Ben Worcester: Let’s reiterate the question… what did the whale say? It was a simple answer he said I, uh… I got nothing. [laughs]

Ben Worcester: It’s always kind of been something that we lean towards and do. I was just listening to some of the first recordings that Tyler and I ever did together and it was apparent even then. So it’s not something we try and do on purpose it’s just what we think about a lot of the time.

Tyler Bancroft: We live in Vancouver, so it’s natural.

The Owl Mag: Would you say that’s some of the inspiration for your songs?

Ben Worcester: Absolutely, lyrically we write a lot about the places and people that we know quite well, so growing up in a place as beautiful as British Columbia, it’s easy to find inspiration in that, and that’s a sort of muse at least for me when I write lyrics. Nature itself is a muse like a beautiful woman; I know Tyler’s said that before.

Ben Worcester: Well, I do — camping and women. [laughs] No, Tyler and I have done a lot of fishing and camping trips and we can’t help it, it just comes out that way.

The Owl Mag: How would you say this album compares to your last album, Islands Disappear?

Spencer Schoening: Well, it’ll sound different to some people if they’ve heard our album before. But for us it’s the same approach that we’ve taken all along: experimenting and just trying things out all over the place. We have Nathan over here, he’s our bassist, and he wasn’t with us until this album, so that’s a big change in the sound, for the better I think.

The Owl Mag: Could you talk a little bit about the meaning behind the song “New Brighton?”

Tyler Bancroft: It’s totally weird. We drove by this lake called Pavilion Lake once when we were on tour and we thought it was really beautiful and that we’d like to camp next to it one time. I looked it up on the internet and it turned out there was some sort of NASA space project happening there where they had these really crazy submarines that were exploring the bottom of this lake because there was colonies of microbialites that resembled the first life on earth. So it’s sort of a song written from the perspective of one of these microbialites that’s being investigated and researched in relation to the first life on earth and it sort of spiraled from there.

The Owl Mag: That’s pretty original! What are some of your musical inspirations?

Ben Worcester: We all love music so deeply and we all come from different backgrounds of why we play music and we all listen to different music at different times, but we generally agree on a lot of the same stuff too. Man, it’s hard to say who your influences are because everything we do and everything we listen to becomes an influence in the music we write. But I would say for me Canadian folk music was what I’m rooted in and not just Canadian folk music, but folk music in general so that’s what started my interest in music.

Jaycelyn Brown: I really enjoy listening to Metric (from Toronto) and Emily Hanes is an inspiration to me musically as well as fashionably.

Nathan Shaw: Personally, I’m mostly inspired by ultra-badasses on bass like [the group laughs], JFK from Death From Above, huge influence of mine. Jaco Pastorius played for Joni Mitchell back in the day. Traditionally I’m a jazz bassist, so I draw a lot of my inspiration from jazz music; Miles Davis, that kind of stuff.

The Owl Mag: That’s quite a wide variety of inspiration! How are you guys feeling about this tour?

Ben Worcester: So far, so really great. We’re having so much fun and we’re in California, so that’s pretty much, you know, paradise. I personally felt more excited to go on this tour and to play shows than I think ever have before. With this new record we’ve been really getting to know the songs for a long time and to actually get out and play them for people and having the album available as of March 6th, people can listen to the new songs we’re playing as opposed to the last time where it was kind of playing new songs that won’t be out for another four months. Everything’s happening now which is cool. Are you having fun Tyler?

Tyler Bancroft: Oh yeah. I mean, we don’t all have to say something for every question.

Ben Worcester: We could. We could all just say one word.

The Owl Mag: [laughs] What is the most rewarding part of making music for you guys?

Ben Worcester: I’d say it’s pretty surreal when people come up to us and tell us how much we influenced them and how much they care about what we’re doing; it makes it worth it. It makes it not about money or anything; like you’re giving back to what we’ve taken from music our whole lives and now we’re giving back to someone else. We’ve had people say they’ve started playing music, joined a band, because of our band, which is ridiculous because we’re still a new band. This is just us, we’re just these people, but that’s pretty rewarding to have a good influence on people.

Tyler Bancroft: I have one. Just meeting people, we have really good friends now in so many different cities in North America and it’s awesome to come visit them. You know, people we stay with or people that we just go have dinner with; that’s huge for us, just getting to know people.

Ben Worcester: Oh, by the way, The Owl Mag wrote some nice things about us recently which we really appreciate also, it was very cool.