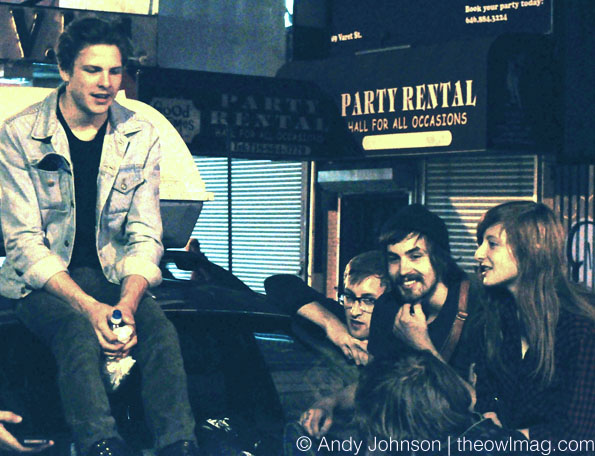 We recently got to speak with Minneapolis rugged rockers Nice Purse before their gig at Big Snow in Brooklyn. Guitarists Ian Nygaard and France Camp toured in Rough Trade Records’ Howler together. However, Camp recently parted ways amicably with the band to focus on Nice Purse and other music opportunities back at home.

The band sat down on their vehicle and shared stories about their current tour, which member snores at night, and what they would do if they fell in a Hot Tub Time Machine. The band wanted to be interviewed as a cohesive unit. Unless otherwise noted, all of the following quotes from the band are by the super-person conglomerate of Nice Purse.

The Owl Mag: How has your mini-fun size tour been going? Have you been crashing on couches and floors the past few nights?

Nice Purse: Well, it has been all floors so far. We played a show in Chicago and after that we drove 17 hours all the way here. We went to Pennsylvania and found the cheapest hotel we could and it was actually fucking great. But that was after 17 hours in this (pointing at their small tour SUV with a rooftop cargo carrier for equipment). There was always one person driving though and the rest of us would sleep.

The Owl Mag: Did the person driving fall asleep once in a while?

Nice Purse: Yes, the driver slept for an hour and a half at one point. So we were going for a good 90 minutes with a sleeping driver. When we got here, we played a show and after that we went to this girl Shelby’s place and she’s really nice. She let us sleep on her one air mattress and a sleeping bag. Oh shit! Do you want some dirt?

The Owl Mag: Yeah sure, give us the skinny.

Nice Purse: So basically Elise (tambourine, vocals) got super drunk and fell asleep at Shelby’s as planned. Then she has a night-TERROR.

The Owl Mag: What does a TERROR entail?

Elise kaPow: Apparently, I was speaking in tongues. You can’t touch someone when they are having a night-terror. I had the best night of sleep, but I guess nobody else slept because of me.

France Camp: Have you ever seen a wolverine snarling? That’s what she does in her sleep. Oh, and she also grabbed my arm earlier that night and told me that I was “as soft as a peach.”

The Owl Mag: Does anyone in the band snore?

Nice Purse: France does, but he has the most delicate baby-like snore. It’s actually very soothing like white noise. It sounds like the ocean or a cat purring. Elise’s teeth grinding is definitely much worse. Basically, our sleep defines our music.

The Owl Mag: If Nice Purse were an animal, what would it be and why?

Nice Purse: Well we recently went past this holographic thing that was a tiger, but it was also a woman. So one moment it was this great tiger and then it was this slutty-ass-naked-woman. To answer your question, we are a tiger with big-ole-girl-boobs. Correction, a tiger with big-ole-space-tits. Also, when France and Ian get very bored they act like honey badgers. It’s the most badass animal in the world. It’s the kind of animal that will start eating a beehive, get stung to the point where it passes out, and after hours of being passed out will finish what it started.

The Owl Mag: We saw the album art for your most recent release Slumber Girls and it is pretty zany. Could you explain the meaning behind it?

Nice Purse: Well, we just got some sheets and went into a graveyard and took some Polaroids. We took a lot of pictures and one of them has Ian’s private parts in it.

The Owl Mag: Slumber Girls was recorded a while ago. If you guys could hop in a Hot Tub Time Machine and have another go at the recording process, what would you change?

Nice Purse: From the beginning, I said that we needed tympani in it. Not Tiffany, tympani. Really though, we could have gotten more instruments in it. I think we should have released it sooner as well. We held onto it for four or five months because we were saying, “This doesn’t sound right” even though it all sounded right in the first place.

The Owl Mag: You guys are pretty crazy on stage we hear. Is it all planned or is it more go-with-the-flow?

Nice Purse: It is not planned. Sometimes we don’t move at all. Sometimes we move so much that we play four songs and stop because France’s guitar strings break and we have to just stand there.

The Owl Mag: What’s the next step for Nice Purse?

Nice Purse: Record more for sure, maybe in November. We want to go on tour more. Most importantly, we are going to look into getting an actual tour van so that we can last longer than a week.

Ian Nygaard: I think we should go to jail before we record the next one. We need to harden up I think. I need to burn down a house or something.

The Owl Mag: On Nice Purse’s Tumblr, you posted that you have once ordered pizza onstage. Could you tell me more about that?

Ian Nygaard: We’ve done it twice actually. We’re the best band ever. We ordered pizza on stage, it came while we were playing and we gave pizza out to motherfuckers. We tried playing our guitars after and our fingers were slimy and it was really bad. One other time, we used our food stamps to buy three party cakes and each one had our CD pushed into it. We then raffled them off.

France Camp: Oh, and I have one more story for you. I’m not bragging about it because I feel awful. At the last show before this tour, I broke two strings on my guitar and I couldn’t play it anymore. James was kind enough to let me use his guitar and I broke the tuning peg on it and then I just smashed it and it was not nice. It wasn’t a good smash either. I imagined it going way different in my head. I didn’t imagine James would be mad at me. It got really quiet afterwards and nobody clapped.