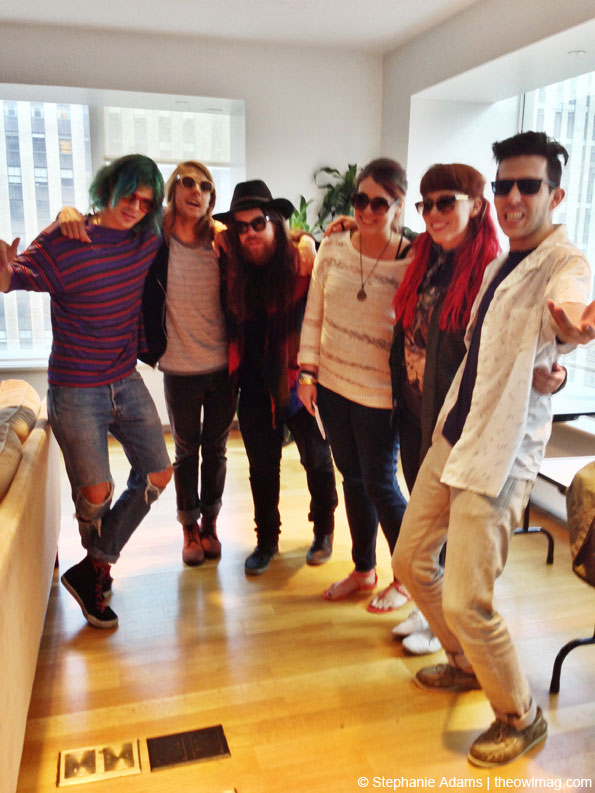 There is no doubt that you have heard of Grouplove by now. They’re everywhere- playing major festivals like Coachella to being featured on an Apple commercial. The Los Angeles-based band of five have had their share of success after meeting by chance at an artist commune in Crete, Greece. Christian (vocals and guitar), Hannah (vocals and keyboards), Sean (vocals and bass), Andrew (vocals and guitar), and Ryan (drums) sat down with The Owl Mag to talk meeting overseas, interacting with fans, and their new album “Spreading Rumours,” due out in September.

The Owl Mag: You guys had a badass show last night in the rain (check out the pics HERE). We were in the pit photographing and this guy in the crowd with no umbrella was standing there yelling “It doesn’t get better than this!”

The Owl Mag: You guys have this great story of how you met in Greece. How did each of you end up there?

Christian: I went to Greece because Hannah invited me. We had just met and a few days later she called me and invited me to go to this art commune in Greece. That was the summer of 2008 and I was struggling artistically in New York with my band and nothing was happening so I said yes. Hannah was awesome and I thought this would be a great way to see if we get on in a far away place.

Hannah: See if we could get it on.

Christian: Yeah…in Greece. So that’s what I ended up doing.

Hannah: I was waiting in my studio to sell a painting to make rent and it was Andrew’s brother who I had been told through our mutual friend, “you gotta meet this guy Matt, he’s gonna buy a painting.” He comes by and he’s this surfer-bro to buy this expensive painting. He said, “oh, I love your work! I’m not gonna buy a painting but do you wanna come to this artist residency in Greece?” I was like fuck… I guess I have to.

Christian: And you got out of your rent ‘cause you left the spot.

Hannah: I had just met Christian and I was like, you know what, can I bring this dude? Cause if I leave New York, I’ll probably never see him again and I’ll be so sad cause I think I’m in love. So I had to call him up, that was the scariest part, having to call him up and be like, “uhhh I know we just met and we kind of made out, but do you want to come to Greece with me for two months?” And he was like “YEAH!” So then we got to Greece and met these squiggle-diggles.

Sean: I was living in London at the time. A friend of mine who was living in Greece had met this guy and was told about this artist commune place. I was playing with some bands then he asked me to come to Greece and hang with him. So I came out there and met these crazies. I call them the crazies, but I call him [Andrew] the prankster.

Andrew: My brother was the guy that went to Hannah’s studio.

Sean: That’s why we call him the little prankster.

Andrew: My brother and I met a guy in 2007 and the two of them became fast friends and starting brainstorming about a place where artists could just create and not have to be distracted by everything in life that distracts you from making art. So, my brother invested in fixing up some of these properties. I went out the summer before and stayed there for a month and a half and we decided that this could work and it would be awesome.

Hannah: Can we do a flashback story though? Remember when me and Christian saw you and Hilary? You guys were like who are these crackheads?

Andrew: Oh yeah when they showed up…

Hannah: We did the Matt Wessen [Andrew’s brother] journey. He’s like “dude, if you’re gonna come, you gotta fly to Athens then take this 10 hour beautiful boat ride…” So we get there late and take this overnight boat and we didn’t know people claim spots, so Christian and I are just awake all night. We get there and the first people we see are Andrew and his girlfriend. They are like, “who the fuck are these people?” So cracked out. And you guys were like, “let’s get wasted on this weird stuff.”

Sean: I remember when I first got there, one of the first people I saw was this guy (points at Ryan) standing completely naked on the beach playing bongos.

Ryan: Well, I was finishing college abroad with my girlfriend and we were in Czech Republic. Andrew and I were the only ones who knew each other. We grew up together in LA. I got a call from him and he’s like, “hey you’re in Europe, right? Come to Greece.” We actually had a long weekend, so we took a flight to Crete. He was suppose to pick me up from the airport, but we get there and he’s nowhere to be found. He wasn’t answering his phone and we’re just standing at this tiny airport just thinking, “what the fuck. We don’t know where to go.” We can’t take a cab because nobody actually speaks English. Finally, I get a call from one of his friends and they were like, “hello Ryan, yeah, Andrew’s surfing right now so take a cab.” I was like, “What? He was supposed to pick us up?” He says, “yeah but the swell was really nice. Give the phone to the cab, I’ll tell them where to go.” And we met everybody out there. And I started getting naked playing Bongos…

The Owl Mag: So did you guys all have music backgrounds going into Greece?

Christian: Everyone except Hannah. She painted.

The Owl Mag: On “Never Trust A Happy Song,” Ryan produced it and Hannah did the cover art. Did you guys make a decision to keep the work inside the band?

Christian: Well, that’s how we ended up doing the EP before we even planned on being a band the year after Greece and we all hung out again. That came out so well how we did it in-house ourselves and we didn’t want to screw with it. When we actually had a chance to do the record, we wanted to do what already had worked and got us attention.

The Owl Mag: You guys have so many ways of reaching out to fans. You have YouTube videos and Instagram. Plus you were in an Apple commercial. While you were recording your new album, you did live video blogs for fans to watch, right?

Christian: That was our manager’s idea.

Hannah: It was an idea that started way too late.

Ryan: We were held up getting the logistics of it going.

Andrew: We started it 8 weeks into a 10 week recording process.

Ryan: So it’s a lot of shots of me at the computer mixing stuff with everyone around me instead of what it should have been…us playing and recording. But it was still fun to talk to the fans that did log on. We answered questions, showed them around the studio, played them little snippets of new songs. To interact with them in that way was new for us.

The Owl Mag: Last time you were in New York was for a sold out show at Terminal 5 during Hurricane Sandy. You guys [Hannah and Christian] are from New York, how does it feel being able to sell out venues in your city?

Christian: It’s crazy. I remember when we sold out Bowery Ballroom… I was like whaaaat?

Hannah: Terminal 5 is the spot that I would never go to because it was too big to see the band. So the fact that we were playing there… I was like, “what is happening?” The thing is… We are still those friends that met in Greece that are playing music together. Everything that’s been happening, we’ve just been trying to keep up with. The fact that we were standing in Terminal 5 and playing for all these people singing along with us- it’s so surreal.

The Owl Mag: So Spreading Rumours comes out in September. You guys put out a great video for your single “Ways To Go” this week. What was the message behind the video?

The Owl Mag: Any favorite songs to look out for on the new album?

Hannah: We’re so psyched. I would say it depends on the mood.

Ryan: You know one of the songs we didn’t get to play last night because of the rain was going to be “Shark Attack” which is definitely one of my favorites. We had also just finished getting it ready for the show because we hadn’t played a lot of songs live. We were so pumped to actually play it and now we don’t have another show for three weeks. But it changes in different moments… different songs are favorites.