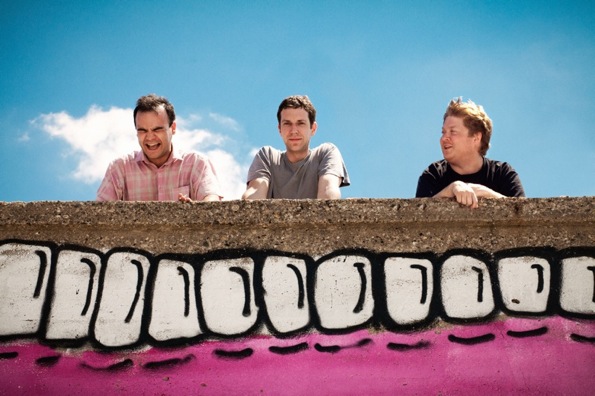 Photo Credit Mike Vorassi
There isn’t much out there that grabs me within seconds of track one and instantly wins me over. However, Baltimore-based Future Islands, managed to not only excite me with their synth-pop-rock sound, but inspired me to dive deeper into their discography, which wasn’t vast; Little Advances (S/T 2006), Wave Like Home (2009) and On The Water (2011). Suddenly, my compulsive Spotify sessions with Future Islands became pretty intense, repetitive, and probably annoying to most of my social network friends. I am NOT sorry.

William Cashion (bass guitar), Gerrit Welmers (keyboards) and Samuel T. Herring (vocals) formed Future Islands in 2006 after a short run as Art Lord & The Self Portraits. Their synth-pop sound is comparable to ’80s new wave/post punk, albeit, unintentional. Samuel T. Herring shares, “We started making music with keyboards and a bass guitar eight and a half years ago, and are still doing it. Back then we did it because that was all we had to work with. Now it’s just who we are. I don’t mind being considered a throwback [to ’80s new wave sound] as long as we continue to bring our own personal element to the table. People can say what they want. In the end, it’s the music that matters and how it makes you feel.”

The opportunity to see them in live-format came and went at this years FYF Fest, where, by the looks of various YouTube video clips, I missed a fantastic show as Future Islands exploded into a free-for-all dance party with sweaty fans. “Oh man, FYF was great for us. It’s always fun coming out to LA and seeing our buddies. The tent was kind of perfect for us, really. That containment helped elevate the show in a lot of ways, but we were amazed at the response just coming onstage, not having even started playing, and the crowd going wild. We never mind a dance party!” says Herring. “The free-for-all at the end of the show – that totally blew our minds. We’ve had audiences rush the stage in Baltimore and North Carolina, but never on the West Coast. We were totally into it, though, and I think the security people in the tent got a little freaked out,” adds bassist/guitarist, William Cashion.

Future Islands are still new to the festival scene having only performed at a handful of them (Hopscotch, Pickathon, FYF, and Prospecto) and as much as they enjoy performing in smaller venues, they really don’t discriminate against any platform for their live shows. “As much as I love to play to a packed sweaty house of 200, I also love to play in a nice thousand person room on a big stage. I think, for a lot of people, they wonder how we’ll translate to a big outdoor stage, if that intensity will carry. It doesn’t bother me, I just love the challenge. One way or another, you’ve gotta get up there and perform for your audience, so that’s what you do,” explains Herring.

Off the latest release, On The Water (Thrill Jockey), “Balance” has been getting radio airplay on local stations like KCRW since its release in early October. The album is a varied mix of a familiar sound colliding with a natural progression. It’s definitely different compared to the other two albums but also gives the listener the challenge of swimming through the sincerity of the songs.

“I feel like On The Water is our most mature batch of songs and they’re also probably our best recorded songs as far as sound engineering and production is concerned. We used a bunch of different instruments on this album as well including electric guitar, marimba, cello, and violin, so I think the sound is a little more organic than the typical Future Islands album,” says Cashion.

“This group of songs was written in the closest proximity to each other chronologically, so I feel there’s a really tight bond between the songs. We were just figuring out things when we did “Wave,” and we recorded that album in three and a half days. “In Evening Air” elevated our game, but was a difficult thing to get down on tape…we spent a lot of time fighting with it to get it right. This time around we knocked it out, we knew what we wanted and we did it. I don’t know, as calm and easy-going as “On the Water” is, I also think it’s the least accessible and the deepest of the three. I don’t say that because it’s sonically challenging, but just because it’s so honest that I think some people won’t be able to accept it right off. It’s definitely a grower, but I think all of our music works that way. And isn’t it good to challenge your audience and not give them what they want, what they expect? I think it’s a positive thing to catch them off guard and let them decide for themselves whether this is shit or not. Give them something that maybe they can learn to love or open them up to a sound they didn’t know they could. This album deals with a lot of those issues too, in a funny way,” says Herring.

Understandably, it can’t always be a sweaty dance party and sometimes songwriting has to be gentler and toned down. On The Water is a perfect example of an album fueled by emotions inspired by “women, sunlight, the moon, darkness, silence, the shore, people, people with people, people without people, and all that other wonderful heartbreaking stuff.”

“That’s just where we were in our minds when we got off the road and started writing. We just weren’t writing dance music. You come off the road and you have to slow down your life and take a deep breath, reorganize–so you don’t kill yourself. I think these songs are the incarnation of that feeling. Definitely a subconscious thing, but that’s just me looking at it in hindsight. It makes sense. We had to write this album to get to the next one,” says Herring.

Future Islands is currently on tour and will be gracing SoCal venues in Los Angeles (Echoplex Nov. 17th), Long Beach (Alex’s Bar Nov. 18th), and San Diego (Casbah Nov. 19th) with, as Cashion so nicely put it, “loud, loud music played by two dudes who hardly move and a lead singer who has enough energy to make up for the both of them.”

You might expect high-energy outbursts on stage by the lead singer, but according Herring, he’s not into hype and says not to expect anything. “I think people should come to every show with a fresh and open mind. Our music isn’t for everyone and for some people, they love our music but can’t much stomach me. So I just want people to know that we put it all out onstage. We’ll give you more than you give us and if you give us more than that, we’ll give even more. The audience and the stage are symbiotic. Just come to a show and make a decision for yourself, don’t take anyone else’s word.” Words of wisdom.