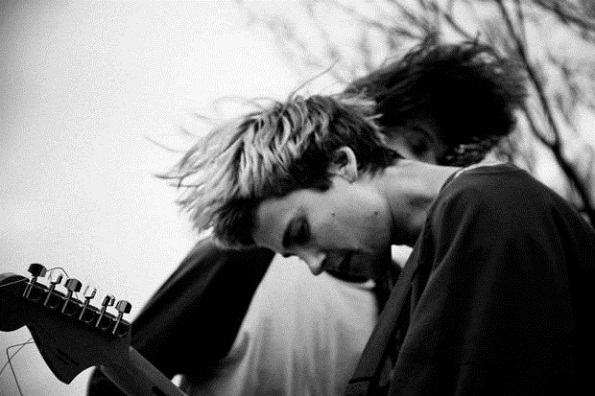 DIIV‘s Zachary Cole Smith might not approach his civic duties with much gusto (“fuck voting”), but when it comes to music, DIIV’s frontman is anything but indifferent. We spoke to Cole about his methodical musical research, his influences—both sonic and spiritual—and the pyrotechnic mishaps of his latest video.

The Owl Mag: Where did the idea for your video “How Long Have You Known?” come from?

Zachary Cole Smith: The idea was inspired by Clifford Owens, a performance artist who I saw at MoMA PS1. He had an installation there with just still performance videos and the audience would be in another room. There was a camera in one room and a screen in the other. He filtered everything through that screen. And there were these really grotesque performance pieces—there was one piece in particular where he had a bunch of fruits and vegetables on a table and just one camera and he eventually interacted with each one in a really sexual way. For our video, I only had two and a half minutes to shoot so we really had to cut it down, but it was actually an homage to him. Like the first act of Owens’ piece has to do with an avocado. He rips it open but he throws away the fruit and not the pit. So that was the first sign that something was off. I wrote it as kind of a ritual, like creating something… you know, like a drug. Distilling the ritual down and just kind of taking the essence of all these magical objects, like the lava lamp.

The Owl Mag: The end result was pretty volatile. Had you rehearsed beforehand?

ZCS: Actually that wasn’t even written in the video. We did it on tour—we slept over at Grant’s house after our San Diego show. We woke up at six and worked on it from eight till noon. Shot it in four hours. So we all kind of showed up and I had already ordered all the materials on Amazon and had it delivered to Grant’s place. So we were doing the video, hanging out, you know, and we had a bunch of fireworks, and I was like “Oh shit, we should fire these in the blender.” I had definitely messed with roman candles before so it wasn’t my first time working with them at all, but I thought the fireworks would fizzle out in the water. The first one fizzled out, the second one did not. It shattered the blender, everyone actually started screaming, like hiding in corners, and we had rented camera equipment that ended up being covered in a bunch of wax. The fireworks were still shooting out and I just ran out into the street in this bad part of LA. It was crazy. So no, not what I had expected.

The Owl Mag: How and when did you get started creating music?

ZCS: When I was a kid kid, my mom was working, so I had nowhere to go after school. Let’s see, Thursdays I would do volunteer work, Tuesdays I had this afterschool mentor guy, and Mondays were piano lessons which I took for two or three years. But what happened at the time was that randomly my mom’s boyfriend was a guitar player, and so he gave me a piece of paper with a bunch of chords on it. And yeah, that was kind of it.

The Owl Mag: How did Oshin come about?

ZCS: Well the record is the ultimate goal of making the band. I wanted to play shows, yeah, and you know, put a song out there. It’s kind of the ultimate product as a musician. It’s all about the record. It was the goal from the beginning. If a song didn’t fit [the record], I would scrap it or release it as a B-side or a single or something. Everything is very deliberate. As for the name, Oshin, it came from a poem that a really close friend of mine sent to me. She was babysitting this young kid who wrote the poem and one day she scanned a copy of it. I just loved it. I filed it away in my brain and ended up using it two years later. It just spoke to me. I just love it.

The Owl Mag: Could you explain the album art?

ZCS: A couple years ago I discovered this artistic movement that had been exploding since the 1950s with thousands of prints. It’s a print studio in rural remote Canada. It still exists today and it’s called Cape Dorset. The first image I discovered was something iconic and simple. It’s kind of a reference to homemade t-shirts and homemade vinyls. I was hand-making all the original cds myself at the time, so I kind of stuck with that image. Later I moved on to other stuff but that first one felt like what our aesthetic really was. I did a lot of research, went to libraries, and got books. Basically I did everything short of going to the studio myself. It was actually an interest of mine before I even started looking for album art.

The Owl Mag: You’ve released both singles and EPs. Do you have a preference?

ZCS: A single is kind of like saying “this is where we are right now.” It will make the rounds on the internet, but it does not have the artistic weight as a full length record. I don’t see a record as being a collection of singles. It’s more like a heavy piece of art. It stands on its own. Singles are things that maybe don’t fit on a record but they are just a snapshot of where you are. It’s like a shortcut to get your name out into the world—to have an online presence. Actually, I think our band has changed a lot since the record came out. I’m writing a bunch of stuff right now. So far I have like fifteen songs. Some will never get used, some will end up on an EP. Right now there’s no way of knowing, but once I have a bunch of stuff, I definitely plan on releasing something soon.

The Owl Mag: You have said before that water signs appealed to you and the rest of DIIV. The album is titled Oshin and names like DIIV and “Doused”—they’re all very aquatic. Was that deliberate or did it kind of come together coincidentally?

ZCS: Right. It was definitely deliberate. There is something really powerful about these images and I thought that it was no coincidence that everyone in DIIV was a water sign. You know, it has a lot of energy, it really fit in with the way the music was starting to sound. We are definitely influenced by water in general in all forms: ocean, tides, anything.

The Owl Mag: I wanted to talk about lyrics and names. When you had to adjust the name of DIIV, you said that the “name is nothing”—or at least secondary to sound.“Doused,”  for instance was temporarily dubbed “the punk song” and you ad-libbed the lyrics for a few months. Do you hope to develop your lyrics in the future or is it something that doesn’t really factor into your sound?

ZCS: No, I mean I think lyrics are really important, but it’s not something that is highlighted, it’s not the focus. I feel like when you give in to any one element in a rock band, then everything hinges on that. So like if the main element is the songwriting then everything hinges on the songwriter. Same with the guitar. That’s all stuff I didn’t want— I wanted it to be completely democratic. The vocals are more of a texture, the lyrics can be indecipherable. But I included the written form in the record and I wanted them to be read along or aloud, or you know, I wanted someone to half remember them. It’s a much less direct form of communication, it’s less objective.

The Owl Mag: Do audiences ever affect your live performances? Do you think they have the capacity to enhance your sound?

ZCS: Oh yeah, definitely. It’s kind of like a subconscious dialogue between the audience and performer. I’m not the type of person who’s like “Nobody is even dancing, what the hell!” I notice that people are looking, talking to each other. I don’t care if they are dancing or not, but then there are also rowdy, more like, punk shows where people jump up on stage, which is definitely exciting.

The Owl Mag: You’ve cited Nirvana and Baba Salah as influences. How so?

ZCS: Coming up with a project, Nirvana was a huge influence—but not really sonically. That’s been a paradigm for rock bands since 1991, or like 1989, pretty much ever since Nirvana formed. It’s been like “I wanna make a band that sounds like Nirvana!” But for me, it was more of a spiritual influence—his persona was an influence. Reading his diaries was huge for me. It was basically my bible. He broke everything down, he was driven, very deliberate, and that’s much more where I took inspiration from. That, and the energy of their live performances. I’m pretty obsessive about music. I listen to every single thing a band does. And then maybe I’ll move on to another one.

As for Baba Salah, I was kind of into these Malian guitar players for a while. I was living in Seattle at the time and I was seeking out artists that played guitar. I met this guy, this Malian kora player. The kora is a string instrument, not like a guitar, more like a harp. I was like “I want to take lessons,” but I showed up with a guitar, not a kora. I just wanted to learn a few simple songs, some repeating forms. I started to make music based on a single guitar note interplay. So that was definitely one source of inspiration. I could also sit here and say Elliot Smith is a huge influence, which I guess he is, but musically there aren’t any similarities between us. It’s a funny thing to say, but I try to narrow it down. I try to find ties to my own music.

The Owl Mag: On that same note, what’s your approach to seeking out music? Is it word of mouth through friends or something more methodical?

ZCS: Very methodical. I’m a pretty obsessive person. Places I find new music…it depends. I find a lot of stuff at the library. That’s a huge source for older music. I don’t listen to new music much. That comes from shows or friends telling me. I find some stuff on the internet.

But there are always these songs you kind of know, in the back of your head that you’ve heard of, but then it’s like, “Wow, I don’t actually know about that artist at all.” That was a huge thing for me with The Cure. It was like I knew who they were, what they liked, what they generally sounded like, and the kids who listened to them. But then when I was talking about them, it was like, “Holy shit, I don’t know anything about this band,” and so I went home, went on the internet, watched every video on YouTube, and that way it becomes a huge musical influence in your life. There’s always someone who’s like “Who is this?” and you’re like “It’s The Beatles, are you fucking crazy?” That happens all the time though. It’s easy to get a surface level understanding. And that happens to me, but I want to hear and understand everything.

The Owl Mag: When I was doing some research I noticed that several people pointed out your resemblance to Eminem. Do you see it?

ZCS: Eminem? [Laughs] That’s awesome. I don’t know. I guess the color of my hair. But I actually don’t anymore; my hair is jet black right now. But hey, that’s cool.